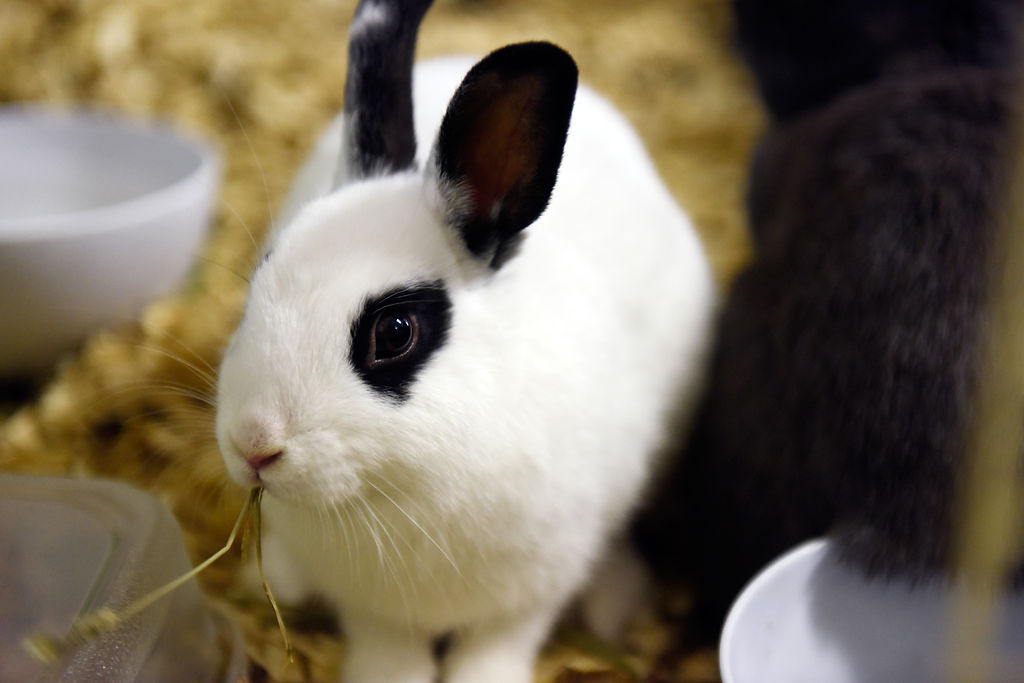 Foster bunny Oreo sits in her open cage during her free play on Thursday. Emily Unterschutz currently has four foster bunnies at her home: two sisters, Valentina and Sally, and Valentina's two babies, Oreo and Peanut. Sally is separated from the babies because they do not get along. Unterschutz operates Columbia Small Animal Rescue out of her home, letting them roam free in her kitchen for twelve-hour shifts throughout the day. 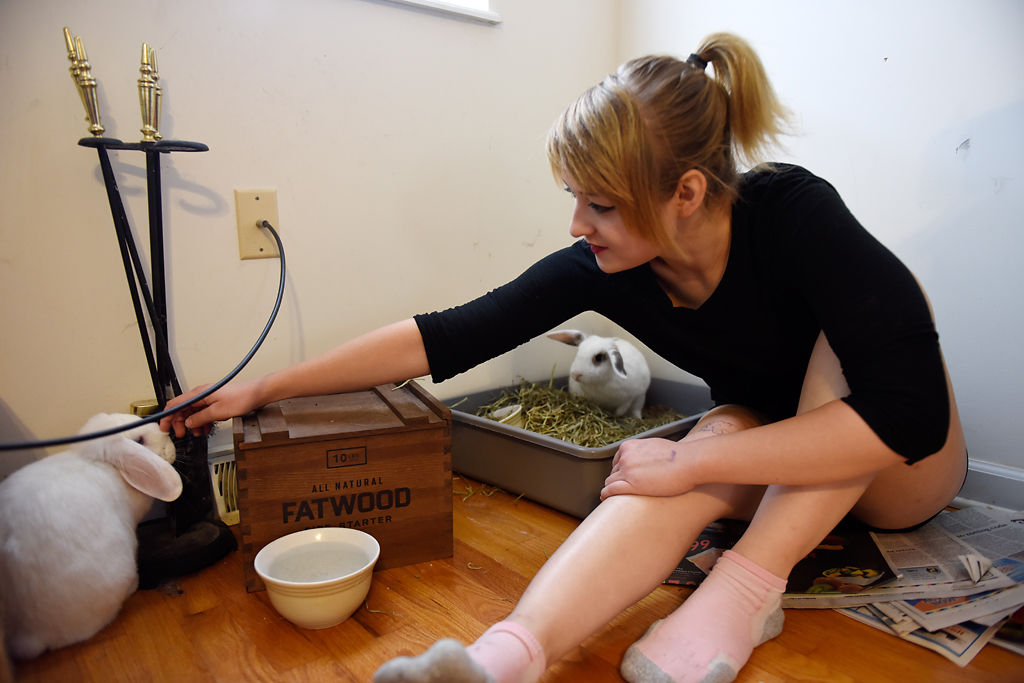 Emily Unterschutz's personal bunnies Eve, left, and Theo, right, occupy the corner of her living room on Thursday. "I've learned anything labeled 'small animal' is more expensive than cat products, which always confused me because they are the same thing. Bunnies and cats share a lot of the same supplies. Now, my bunnies and the foster bunnies use almost all cat products," Unterschutz said. 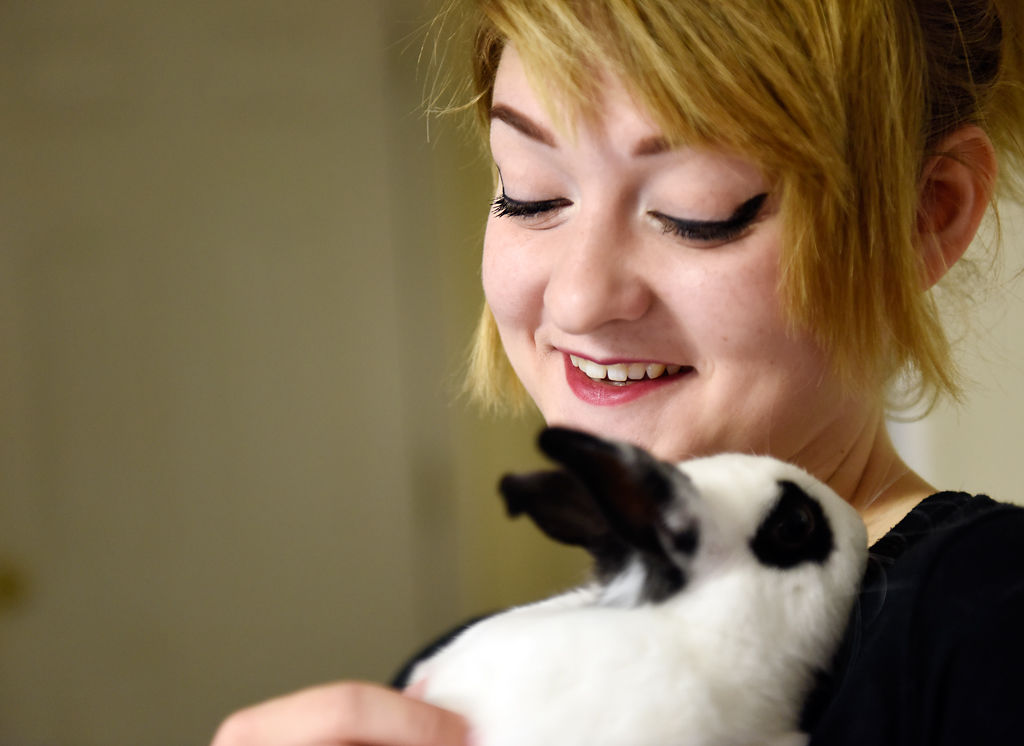 Emily Unterschutz cradles her foster bunny Oreo in her kitchen on Thursday. "I didn't name them, I don't like to get attached. My parents named them," she said. 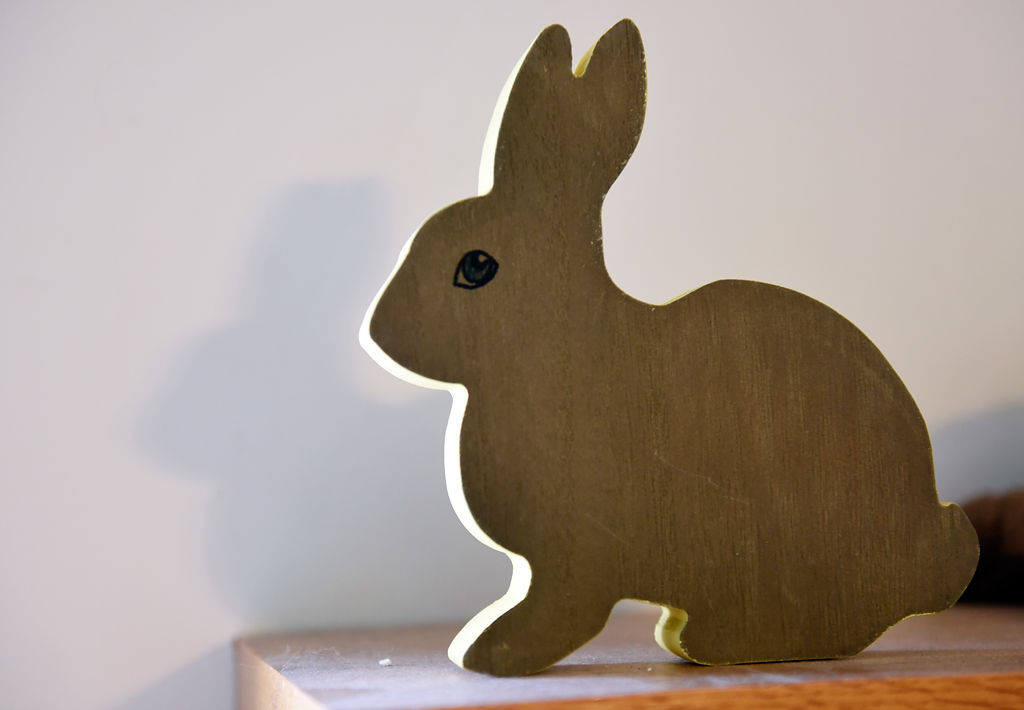 Foster bunny Oreo sits in her open cage during her free play on Thursday. Emily Unterschutz currently has four foster bunnies at her home: two sisters, Valentina and Sally, and Valentina's two babies, Oreo and Peanut. Sally is separated from the babies because they do not get along. Unterschutz operates Columbia Small Animal Rescue out of her home, letting them roam free in her kitchen for twelve-hour shifts throughout the day.

Emily Unterschutz's personal bunnies Eve, left, and Theo, right, occupy the corner of her living room on Thursday. "I've learned anything labeled 'small animal' is more expensive than cat products, which always confused me because they are the same thing. Bunnies and cats share a lot of the same supplies. Now, my bunnies and the foster bunnies use almost all cat products," Unterschutz said.

Emily Unterschutz cradles her foster bunny Oreo in her kitchen on Thursday. "I didn't name them, I don't like to get attached. My parents named them," she said.

COLUMBIA — Eve and Theo have the run of the house.

When their owner, Emily Unterschutz, forgets to give them their daily treat, they ignore her for the rest of the day. They’re passive-aggressive but sweet, and they love to cuddle. They're litter-trained, know their names and greet Unterschutz at the door when she comes home. They have soft, white fur that ends up over all of Unterschutz's clothes.

Cats? Dogs? No. Eve and Theo are rabbits.

In January, 19-year-old Unterschutz unofficially started Columbia Small Animal Rescue, taking in rabbits and other small animals like guinea pigs. At the end of February, the rescue became a registered 501(c)(3) nonprofit.

A year ago, Unterschutz had been looking for a pet to call her own and decided on a whim to adopt Eve at a pet store. She adopted Theo a month later, not knowing they would prompt her to become a fierce advocate for proper rabbit care.

Now, about seven months after she began her rescue and a year after she adopted Eve and Theo, Unterschutz has success stories under her belt, rabbits under her care and the worry of how to keep a rescue running on her mind.

At the time she adopted Eve and Theo, she was working as a PetSmart employee and hadn't ever thought of starting a small animal rescue. Once she had rabbits in her care, however, she quickly realized how little people knew about caring for them.

Unterschutz sat with Eve and Theo this past Thursday, watching them huddle next to her empty fireplace. Gently, she reached out and smoothed the fur on Eve's forehead. Eve's pink nose twitched, and her eyes closed.

“People think bunnies are hamsters,” Unterschutz said in an earlier interview. “That’s why they get them, but bunnies are pretty much just cats. When they love you, they greet you at the door, and when they’re mad at you, they don’t greet you.”

According to its website, the Columbia Small Animal Rescue is “dedicated to finding permanent, loving homes for the animals in mid-Missouri that don’t have many other rescue options in the area.”

Columbia Small Animal Rescue is an independent rescue trying to fill the gaps left by the larger rabbit organizations like House Rabbit Society, which has chapters around the country, including Kansas City and St. Louis.

Although Central Missouri Humane Society does accept small animals such as guinea pigs and rabbits, space is often limited.

In Columbia, the number of small animals being abandoned at shelters has been on the rise. From January to May 2017, 60 small animals have been relinquished at Central Missouri Humane Society compared with 23 for the same period in 2016, according to data on the humane society website.

In a study published in 2012 in the Journal of Applied Welfare Science and posted on the Animal & Society Institute website, of the four shelters researched in Massachusetts and Rhode Island, 70 percent of rabbits abandoned were adults. Of these cases, "the most common reason for relinquishment was inability or lack of interest to care for the animal."

People often underestimate how much of a lengthy commitment they are. Jennifer Sullivan, a veterinary technician at Noah's Ark Animal Hospital & Bird Clinic, said rabbits tend to live between 10 to 15 years, whereas guinea pigs live between four to eight years and hamsters live about three years.

According to House Rabbit Society, rabbits do not need a cage, but if one is necessary, it must be at least four to six times as big as the rabbit while it's stretched out. They also need a minimum of five hours outside their cage per day, though more is recommended.

“Cages for bunnies are like crates for dogs,” Jake Earnest, the vice president of Columbia Small Animal Rescue, said. “They’re fine temporarily but cruel when used as a long-term solution.”

Similar to dogs and cats, rabbits of all ages must have their house rearranged so they won't hurt themselves, and they can't be left in a new home that hasn't been deemed safe. According to a guide on rabbit proofing by House Rabbit Society, rabbits have a habit of chewing through wires and cords, which could kill them. Additionally, they're tempted by the bright green leaves of houseplants, most of which are toxic to them. Unterschutz said rabbits play by destroying things, so rabbit owners often provide cardboard boxes to destroy or toys to chew on.

There are possible problems with rabbit abandonment that go beyond just finding them a new place to live. Sullivan said the emotional capacity of rabbits is unknown, but in Unterschutz's experience, they seem to get attached to their owners and miss them.

“Even if your rabbit doesn't seem like it likes you, you are the only person it knows,” Unterschutz said. “It sees you as its world."

The statistics shelters like the Central Missouri Humane Society gather about small animal abandonment are not conclusive. Since wild rabbits are common, Unterschutz said people may choose to release their domestic rabbit into the wild rather than take it to a shelter, thinking they will survive like wild rabbits.

Sullivan said domestic rabbits don't survive because they don't know how to forage or deal with extreme climates. Additionally, if the rabbit was raised alongside domestic dogs and cats, their instincts to stay away from predators in the wild are dulled.

'Sleep just doesn’t happen for me'

When Unterschutz started Columbia Small Animal Rescue, she did not realize how big a need there was for a small animal rescue nor the amount of time it would require. She also takes classes at Moberly Area Community College and works at Cracker Barrel; two rabbits, a puppy and a hamster rely on her.

“I don’t know what to prioritize over what,” Unterschutz said. “I don’t know whether I’m going to college next semester, but continuing the rescue is the most important thing to me at the moment. I need to work because I need to live and provide for the rescue, and that leaves school in the dust. Sleep just doesn’t happen for me.”

Information on rabbit care is hard to find. A quick Google search of "pet rabbits" reveals pages of mixed signals. There is no clear consensus for readers on what kind of food is best, whether rabbits need time outside their cage or whether outdoor enclosures are humane.

Unterschutz is working to make people more knowledgeable about rabbits. She typically spends at least $75 per rabbit that comes to her rescue, whether that's for medicine, food or spaying/neutering. However, she charges a $15 adoption fee, so for each rabbit, Unterschutz is left $50 in debt — but with the knowledge that another animal has been adopted.

“No one would buy a rabbit for more than $15 or $20,” Unterschutz said. “No one would buy them. It’s like, ‘Why would I buy this bunny when I could buy a bunny from this breeder for $4?' But usually those bunnies are too young, they’re not spayed, and they’ll usually have a lot of health issues later.”

In February, Unterschutz posted on GoFundMe, a fundraising site, asking for donations to keep the shelter running. As of Thursday, $165 of the original $100 goal was raised. According to the rescue's website, the donations are used on vet bills, for gas money to pick up unwanted pets and for business expenses.

The rescue had to downsize recently because most foster volunteers have left Columbia for the summer or are busy with internships. Although there have usually been between 20 and 30 rabbits under the rescue’s care, there were 10 as of Thursday. Unterschutz's parents have two ill foster rabbits and two baby rabbits, and the other six are split up between three fosters.

Traci Lynn has been a registered nurse for 27 years. When she decided to go back to school to major in psychology at MU, she wanted an animal she could cuddle, but she couldn't handle a puppy. The solution came through an ad she'd seen on Craigslist, asking for people to foster rabbits.

Lynn started fostering for Unterschutz in early 2017, right after Columbia Small Animal Rescue began. Her first rabbit was Oliver, and Lynn said it was difficult to give him up once he got adopted. Now, several rabbits later, Max is considered a member of the family.

"We are in love," Lynn said. "He plays with toys, and he's always really excited to get out his cage at the beginning of the day. When we come home, Max is always standing up waiting to be let out."

After she and her family had to euthanize their dog in November, Lynn said it got lonely to have just their cats, bearded dragons and geckos. Fostering rabbits was a great opportunity for them because they got a cuddly animal that desperately needed a sanctuary.

"I want to adopt every rabbit that comes to me," Lynn said. "I’ve had rabbits when I was younger and when my kids were younger, but these bunnies just run all over my house."

Details: The rescue organization charges a $15-$20 adoption fee to help defray the cost of caring for the rabbits.

Second Chance received more than 30 applications to foster pets in the last week, and the Central Missouri Humane Society has gotten over 100 applications.