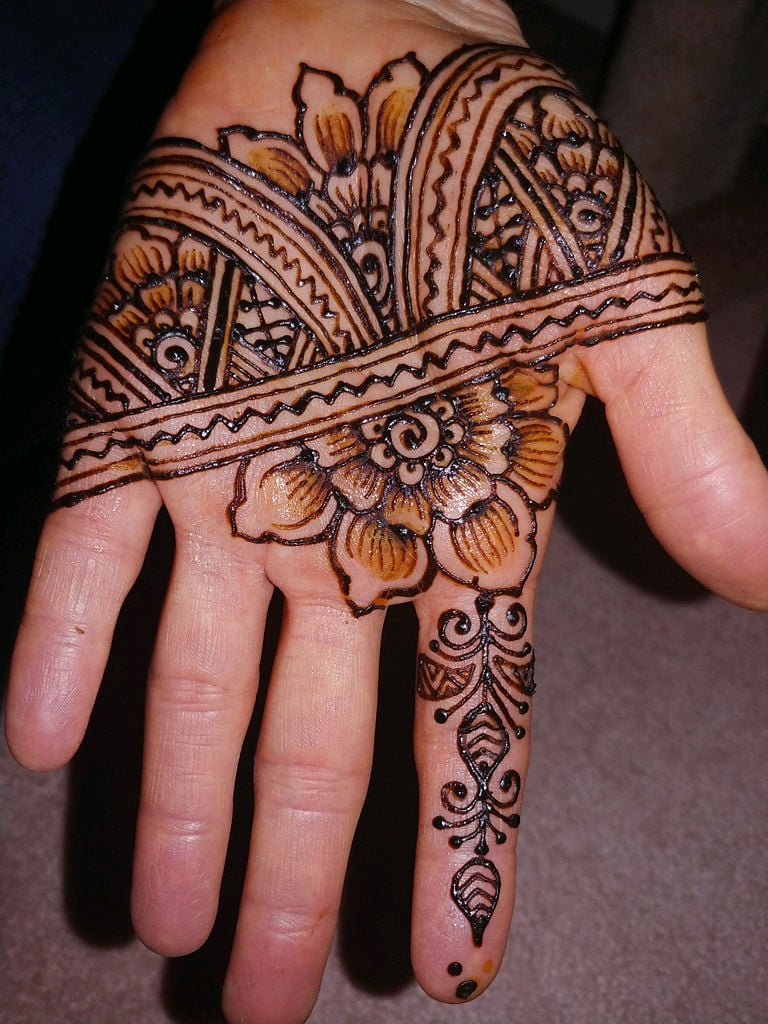 According to Sue Giger, a Columbia-based Henna artist, henna often appears darker when still wet as is the case in this photo. However, when done the stain will be a reddish-brown color rather than the black look that it has in this image. 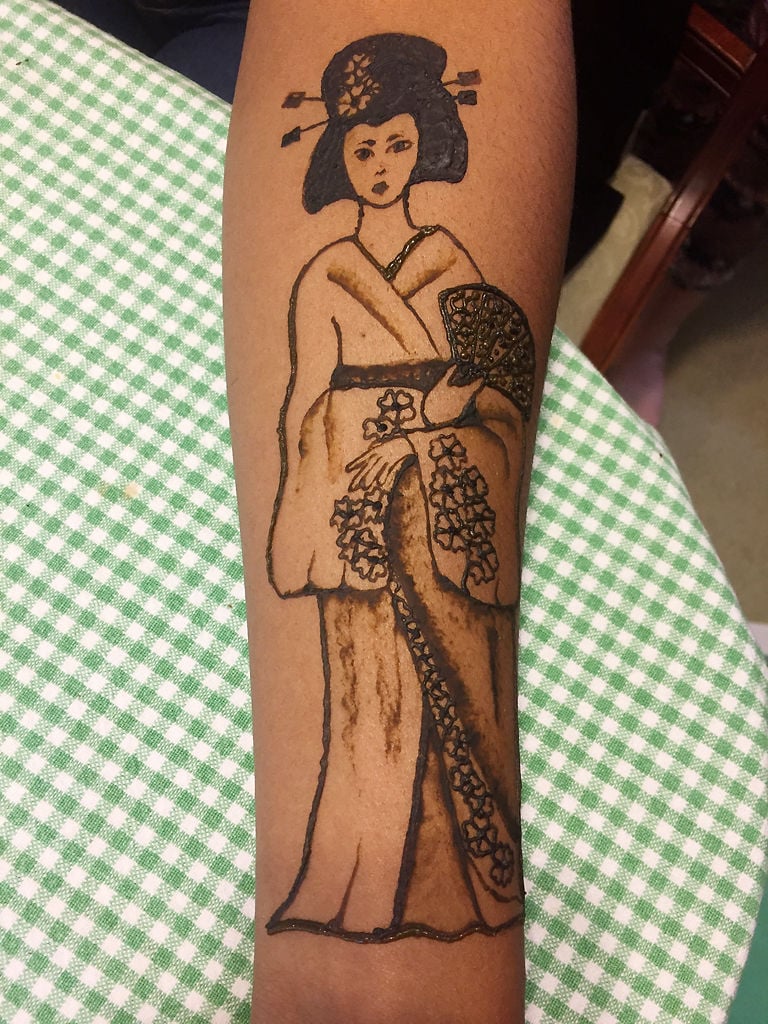 According to Sue Giger, a Columbia-based Henna artist, henna often appears darker when still wet as is the case in this photo. However, when done the stain will be a reddish-brown color rather than the black look that it has in this image.

When a friend approached Columbia artist Sue Giger for a henna tattoo, Giger had never heard of it.

Giger, who conducts her part-time art business under the name Midnight Museum, has experience in printmaking, watercolor and acrylic painting and face and body art. When her friend told her about henna, she was immediately intrigued to learn a new art form.

After researching, buying supplies and experimenting with a number of pastes, Giger was hooked.

Henna is a semipermanent dye made from Lawsonia inermis, a crop grown in the Middle East, Africa and southern Asia. Giger said one reason she fell in love with henna is because of its strong cultural history.

“Anywhere that henna grows, there are cultures that have rituals around it,” Giger said. “Medicinal, decorative, ritual, religious, celebratory, all manner of things, and so it’s amazing.”

Six years after discovering henna, Giger has perfected her henna recipe and gives tattoos at a number of festivals and takes appointments throughout the year. However, her nonprofit program, Battle Armor: Henna for Healing, allows her to connect more deeply with her community.

“Henna for Healing seems to be one of the most soulful and heartfelt ways that I could interact with the community,” Giger said. “Henna is just something I’m very passionate about, and it’s a way for me to share that passion with people in a healing manner.”

Giger decorates those who’ve lost their hair from illnesses such as cancer and alopecia with free henna crowns and also tattoos people struggling with other life circumstances, like the loss of a loved one, family sickness and divorce. She said her henna tattoos can be used as a meditative exercise and as a way to get a peace of mind.

“If they are coming to get henna for healing, they’re most likely struggling in some facet, and I want to be just a way to make that a little easier,” Giger said. “I would just hope they get a little moment of peace or maybe some introspection or insight into whatever ails them.”

However, not all of Giger’s henna tattoos have healing purposes.

When Lois Kay was planning her maternity photo shoot, she wanted something to add something unique. She contacted her longtime friend, Giger, to tattoo henna on her baby bump.

Kay said being tattooed by Giger was a peaceful experience.

“It was a very relaxing to work with her,” Kay said. “She makes your very comfortable and is respectful of your body and space.”

Giger has been interested in art since she was young. Her mother, who worked as a nurse, was constantly doing something crafty like watercolors, quilting and sewing, Giger said. Then in grade school and high school, Giger said she was blessed with good art teachers who helped her nurture her love for art.

Traveling with her family also inspired Giger to pursue art. While she was growing up, travel was a top priority for her family. They often went on road trips or vacationed to countries or states they hadn’t been to yet. She has been to 49 states, Australia, Italy, Mexico, Canada and several islands in the Bahamas and the Caribbean.

To Giger, travel has made her more sympathetic to other cultures, and that’s translated into her art and lifestyle.

“I just can’t tell you how valuable that is to inform your lifestyles as far as art but also acceptance of different cultures, differences in the people, religion, ethnicity,” Giger said. “That’s primarily one of the reasons I got into henna — because it’s such a multicultural immersion.”

Traveling, especially in Italy where Giger saw ancient and Renaissance art, gave her a new perspective on American art.

“You’re allowed more of a bird’s-eye view on American art because that’s where it all comes from, originally in Egypt and Italy and Greece,” Giger said.

After graduating with an art degree from Columbia College in 2000, Giger realized most of the jobs available were in graphic design. Since she was never inclined to computers, her career plans changed, she said.

“Then it was to have a day job that pays the bills but something that is enjoyable, low stress, a set schedule to where I could have the full mental capacity and time to pursue art in my off time,” Giger said. “So I’ve been working in libraries since I was in college.”

Giger found her love for libraries at Stephens College, where she attended her freshman year. She was constantly in the library, and a friend told her they had student workers, so she decided to apply and got the job.

“After I worked there, it was the place for me,” Giger said. “It was quiet. People were nice. It’s not busy; it’s laid back. It was great so that was it for me.”

Giger works now at the MU Veterinary Library, where she rediscovered another passion: raptors — or birds of prey.

Giger said that when she was growing up in Mexico, Missouri, her mother was interested in birds and the family had a pet canary. When they went on road trips, they counted hawks. They attended Eagle Days, put on through the Missouri Department of Conservation to spot bald eagles.

After compiling news articles for the College of Veterinary Medicine, Giger came across one about the MU Raptor Rehabilitation Project and decided to volunteer. She works to rehabilitate birds of prey and release them back into the wild. She also trains other volunteers in feeding and handling the birds.

Giger’s work with raptors is just another facet of her nature-oriented lifestyle. She loves to fish, hike, garden or anything else involving nature, she said.

“To me, that’s what enhances life so much. It’s the life. And not only the animals but the trees, the flowers, the little ecosystems,” Giger said.

In an effort to preserve nature, Giger tore out all the beds in her garden this past summer to replace with native and pollinator species as an example to her community.

“That’s how you change people’s minds — to be an example of what you want,” Giger said. “So that’s what I worked toward in all facets.”

Giger’s love for nature is another reason she became interested in henna. She said it gives her comfort knowing she can tell her clients exactly what goes in her products: henna powder, lemon or apple juice, essential oils and sugar.

Giger said she’s a nurturer by nature and wants that to inform her artwork as well.

Giger hopes to bring her nature-conscious lifestyle to her art work by using natural ingredients in her henna and and working with reusable cones and bottles.

“That’s very much part of my philosophy with art,” Giger said. “And that’s why I’m drawn to henna.”

The dangers of black henna

Every time Sue Giger gives a henna tattoo, she makes sure to educate her client on the dangers of black henna.

Giger said henna that appears to be black is not the same as the real henna.

"It's actually hair dye. There's not usually any henna actually in the product," Giger said. "It's got hair dye in greater concentrations then what they use in your hair, and it's not meant to be used on the skin."

Black henna contains Para-phenylenediamine, or PPD, a coal tar derivative used in hair dyes and is illegal to use on skin, according to Giger's website.

Giger said the PPD can be absorbed into the skin, potentially causing organ failure and anaphylactic shock and can contribute to kidney and bladder cancer due to the exposure of hair dye.

The Food and Drug Administration warns consumers that temporary tattoos, such as henna, are not risk free, in a consumer update.

Giger said the use of black henna is rampant in tourist communities.