A lawsuit by the cities of Columbia and Joplin against Spectra Communications Group, which does business in Columbia as CenturyLink, is nearing a conclusion.

In the suit, the city of Columbia claims it’s owed as much as $51 million by the company in unpaid or underpaid taxes and fees from 2007 to the present. 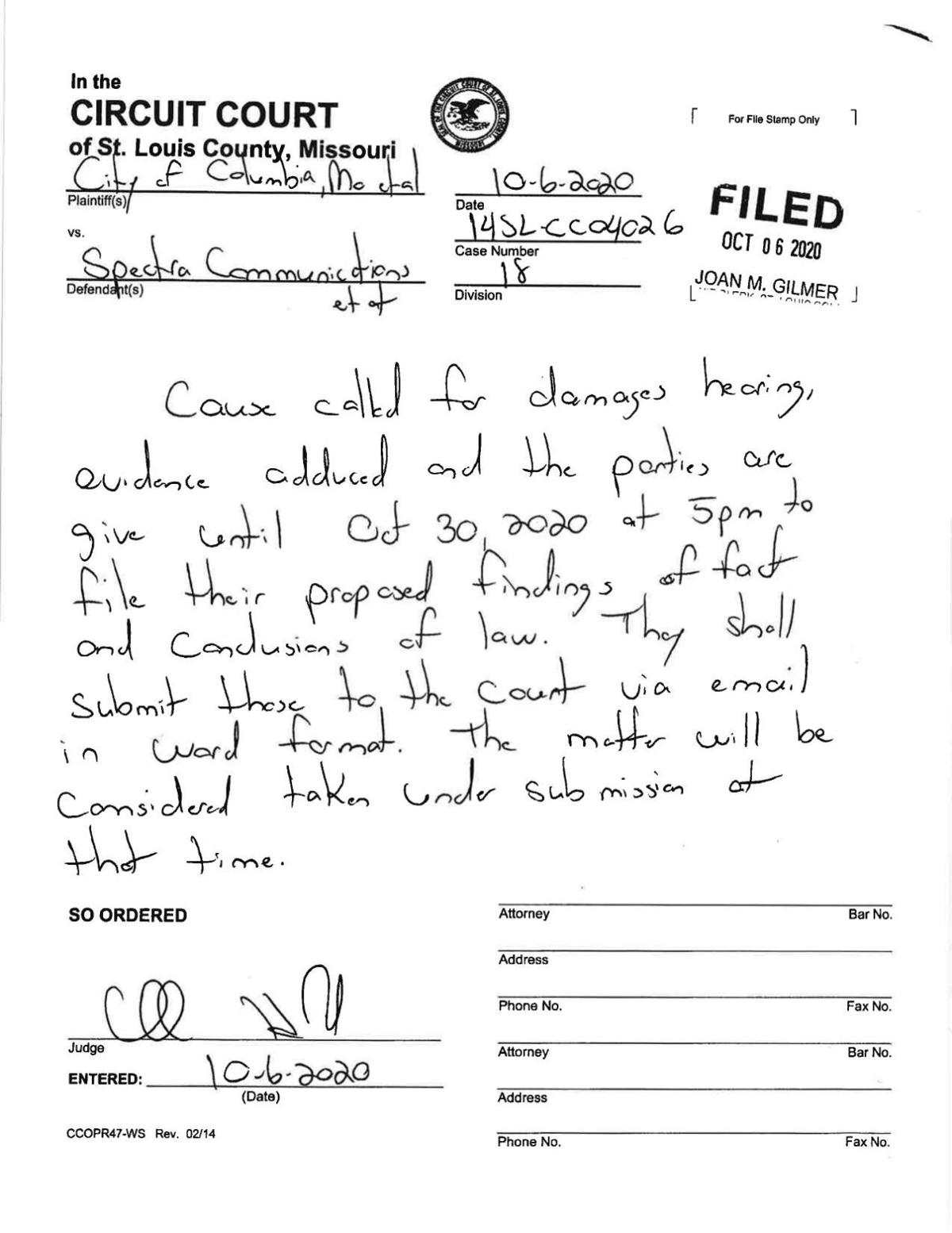 The city of Joplin alleges it is owed a little more than $1 million by CenturyLink for similar reasons. The two cities are attached to the same lawsuit, filed in St. Louis County.

Spectra CommunicationsGroup argues that business taxes that cities levy for telephone services should not apply to some services that a company provides. The services include long-distance toll and private line services.

The suit was filed in 2014. Last month, a St. Louis County judge called for a damages hearing and requested that the parties file evidence for damages by Oct. 30, according to court documents.

CenturyLink has been sued by other cities. A lawsuit filed June 3 by the city of New Orleans makes similar allegations against the company, claiming that CenturyLink owes $13 million in unpaid franchise fees spanning a decade.

In a summary judgement in the Columbia-Joplin case, the court ordered the defendants to pay the cities their costs, including lawyers’ fees. The court reaffirmed this decision June 23, according to court documents. Essentially, the judge asked for an estimated amount of money that CenturyLink owes Columbia and the reasoning for that specific amount.

In a 17-page brief filed on behalf of Columbia and Joplin by their lawyers Oct. 5, the amount of money the cities allege they are owed is explained in great detail. The cities’ representatives say the court should award the city the “unpaid taxes, interests and penalties beginning May 10, 2007, to present” owed by CenturyLink.

The cities’ attorneys assert “it is undisputed that CenturyLink owes a 5% penalty to the cities for CenturyLink’s failure to pay the full amount of taxed owed.”

But this is a fraction of the total amount, attorneys say. The total amount is much higher because of interest and penalties incurred from July 2007 to present.

For all amounts of unpaid taxes between 2007 and August 2012, CenturyLink owed interest at a prejudgement rate of 9%. From August 2012 to the present, the amount of interest owed varies but was set at specific annual rates by the Missouri director of revenue. The city’s lawyers think that the interest rates applicable to municipal taxes for the following years are as follows:

They state “the cities (Columbia & Joplin) have made a strategic decision to pursue exorbitant and unwarranted damages instead of seeking to prove that CenturyLink actually failed to pay license taxes within the scope of their ordinances,” according to the brief.

The brief also cites the five-year statute of limitations and whether or not it applies to CenturyLink’s liability along with the claim that the cities rely “on defective evidence and misinformation.”

“As a result of the cities’ overreaching, they should recover nothing,” the brief states.

It is unclear what the next step is in the lawsuit. Online court documents were last updated Nov. 6.

A seven-year lawsuit between Columbia, Joplin and CenturyLink has ended. The company owes the cities a total of $54.9 million.