COLUMBIA — Sexual assault victims often don't remember an incident in a way that seems logical. Small sensory details can stand out — the color of a poster, the design of a belt buckle — while the chronology of events or personal characteristics of the assailant might be hard to retrieve.

That poses a challenge for law enforcement officials trying to gather concrete evidence and reconstruct an incident from beginning to end. The disconnect can be frustrating for both victims and police, and decrease sexual assault reports.

The Columbia Police Department wants to change that by altering the relationship between police and sexual assault victims through a new program called You Have Options. It uses trauma-informed interviewing and other approaches to give victims control of the incident reporting process. The goal is to help increase sexual assault reports and identify serial offenders.

"I like that it gives them control over the reporting and sexual assault investigation," Buck said. "A sexual assault is very traumatic for the victim who had no control over what was happening to them. It's empowering to get at least some control back over your life."

The department will spend the next year finishing the work of implementing You Have Options and officially launch it in the beginning of 2018.

Carrie Hull, a detective with the Ashland, Oregon, Police Department, created You Have Options in 2010 after a string of sexual assaults, said the program's training specialist Christia Currie.

Ashland police officers realized they weren't getting accurate information from victims during interviews, so Hull reached out to advocates, survivors and community members to understand the problem.

From these conversations, Hull developed the "20 Elements" that You Have Options law enforcement agencies must offer to victims during each sexual assault report and investigation. These elements give the victim as much control as possible during the reporting process. 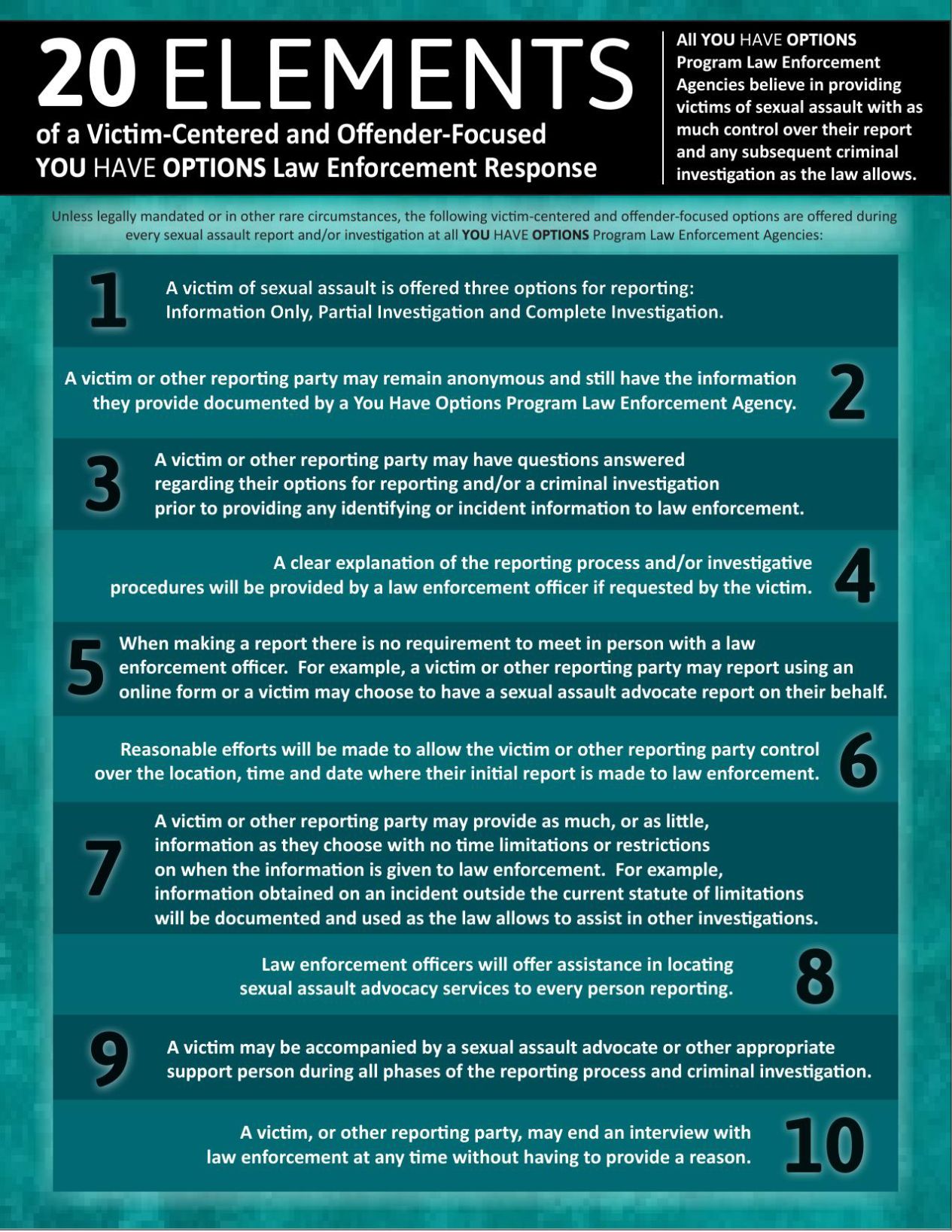 When victims report to a You Have Options agency, they have three options: information only, partial investigation or complete investigation. They can also report anonymously or through a third party.

Other elements include helping victims locate advocacy resources and allowing victims to end an interview with law enforcement at any time without providing a reason.

Buck attended a three-day You Have Options training in Medford, Oregon, in August, where instructors taught 25 participants from departments across the country about the elements and how to train their departments.

Buck is in charge of the administrative side of the program and communicating with You Have Options staff in Oregon. Police Trainer Andre Cook will gradually train the department's entire staff of 166 sworn officers and additional civilian staff so anyone who comes into contact with victims, from dispatchers to front desk workers, know the program's basics.

They'll be able to explain the reporting process to victims and that the crime won't be prosecuted unless the victim chooses to proceed.

The final day of the training focuses on the neuroscience behind the brain's fractured memories of traumatic events. Participants learn about trauma-focused interviewing methods designed to cause less harm to the victim than traditional police interviewing and investigative techniques.

"A person traumatized is going to remember bits and pieces and have blacked out spots and the story's just not going to make sense," Buck said. "Traditional law enforcement says OK, try to make sense of that story, find corroboration and evidence, but for the victim that information or memory of the event is not necessarily there when using the traditional law enforcement interview techniques.

"The trauma-focused interviewing provides a much more positive experience for the victim, which results in more information obtained about the sexual assault."

A new way to interview

The Columbia Police Department also sent an officer to Fort Leonard Wood this summer to take a deep dive into trauma-informed interviewing.

The technique was born out of the problem military police had trying to understand exactly what had happened after U.S. Army Maj. Nidal Hasan killed 13 people and injured 33 others in the November 2009 mass shooting at Fort Hood, Texas. Even after interviewing the victims, many questions remained unanswered.

Criminal investigators asked him to re-interview some of the people hurt in the shooting, and Strand wondered what he would do differently. After debriefing emergency responders, he went to interview a man whom Hasan had shot four times.

Standing by the man's hospital bed, Strand didn't begin by interviewing him. Instead, he apologized to the victim for what he'd gone through before asking him a series of open-ended questions.

The technique he used has since become known as Forensic Experiential Trauma Interview, or FETI, a trauma-informed method that gives a victim more control over an interview. Its goal is to extract accurate information while minimizing the harm police can cause.

Strand recalled that his first goal during the Fort Hood interview was to show "genuine empathy." Police, he said, often are taught to build rapport with victims, using niceties such as asking where they're from or what hobbies they enjoy.

"But for a trauma victim, that can be really irritating," Strand said. "It would be like if the emergency room gatekeeper started to engage you in a conversation about what sports you like."

To build genuine empathy, Strand acknowledges the victim's pain and difficult situation. When the Fort Hood shooting victim teared up after Strand apologized, Strand knew he would be allowed into what he calls his "trauma bubble." Victims' views of the world and the people they trust change after traumatic events, Strand noted. The trauma bubble can be a lonely, scary place.

For his second question, Strand asked the Fort Hood victim what he was able to remember from the experience. The words "able" and "experience" were key to relieving the pressure and frustration that can come when victims don't have answers to direct factual questions. That can cause stress to build and the victim to shut down.

The better strategy, Strand said, is to invite victims to share their thoughts, emotions and sensory memories in addition to other central details of the experience. Simply asking someone what happened is a "one-dimensional question," he said. "Experience" is three-dimensional, which fits better with how the brain operates during trauma.

The science behind trauma

During a traumatic event, the brain releases stress chemicals that impair the functions of the prefrontal cortex, said Portland, Oregon-based psychologist Christopher Wilson. He's a contracted instructor for FETI training and trauma-informed interviewing for You Have Options.

The prefrontal cortex makes decisions and uses logic to regulate behavior, Wilson said. It controls the brain's ability to focus our attention and weaves together information to create a narrative about a past event.

When the brain experiences trauma, stress hormones impair the prefrontal cortex, which loses its ability to control the brain's focus. A more primitive part of the brain, the limbic system, gets the upper hand in survival mode, Wilson said.

That's why some sexual assault survivors don't remember how their attacker looked but might have detailed memories of a rug on the floor or a poster hanging on the wall, Wilson said. The brain focuses on something that will help it cope with trauma.

But for law enforcement who don't understand neuroscience, those memories can seem irrelevant or fictitious. FETI training helps officers understand how a victim might react, so officers don't misinterpret the victim's account of the sexual assault, Wilson said.

Victims often struggle with sequencing, which the prefrontal cortex plays a role in, Wilson said. They remember fragments of memories and sensory details but can't form a timeline. Sometimes, details that seem important to law enforcement can be blocked entirely. That can cause officers to ask leading questions or unintentionally pressure a trauma victim.

Strand used traditional interviewing techniques for much of his career, but he thought there must be a better way that was friendlier to victims. About 20 years ago, he started developing his own style of interviewing that eventually turned into FETI.

For law enforcement, the most challenging part of learning the FETI technique is feeling as if they're not asking the right questions, Strand said. He's been criticized for his open-ended questions being too similar to therapy or counseling, but he said law enforcement officials have been open to adapting the new techniques and have had great successes with them.

FETI training lasts two weeks, and students get 80 hours of instruction in neuroscience, evidence collection and self-care. During the first week of training, the students use FETI to interview each other about a traumatic experience of their own. They record the interviews, and instructors review them.

The exercise lets students practice using FETI and experience the interview from a victim's perspective, said instructor Lori Heitman. Law enforcement shouldn't use a tool without knowing what it feels like, she said.

Research shows many sexual assault victims opt out of the criminal justice system due to the stress of working with law enforcement, Strand said. Just 344 of 1,000 sexual assaults are reported to police, according to the Rape, Abuse and Incest National Network.

The gap between sexual assaults and police reports is also prevalent at MU. In 2013, the Relationship and Sexual Violence Prevention Center, a confidential campus resource office for sexual assault victims, received 92 incident reports, according to previous Missourian reporting. The MU Police Department received 14.

Buck wants to shrink that gap in Columbia through You Have Options and FETI. She acknowledged that an increase in reports could alarm the public, but said the police department will work with City Council and local colleges and universities to explain that more reports means a more accurate picture of sexual assault in the community.

"An increase in reporting is a sign that victims of sexual violence feel more comfortable and see that reporting to law enforcement is a viable option," Buck said. "Just because they report it doesn't mean it's going to trial."

Investigations using You Have Options can take longer because the victim sets the pace, but Buck believes it's worth it. If a victim does decide to prosecute, the case and the victim are in a better place to go ahead with a successful prosecution, she said.

"In the end, I think we get better investigations and help the victim get through the traumatic incident and get back to their lives," Buck said. "The worst part shouldn't be the reporting process."

Columbia Police Department: To report a sexual assault, call 911 for life-threatening emergencies and 573-442-6131 for other reports. Reports can also be made in person at 600 E Walnut St.

MU Office for Civil Rights and Title IX: To report a sexual assault on the MU campus, call 573-882-3880, email civilrights-titleix@missouri.edu or use this online form.

*CORRECTION: An earlier version of this story misstated a finding in an academic study on campus service use.