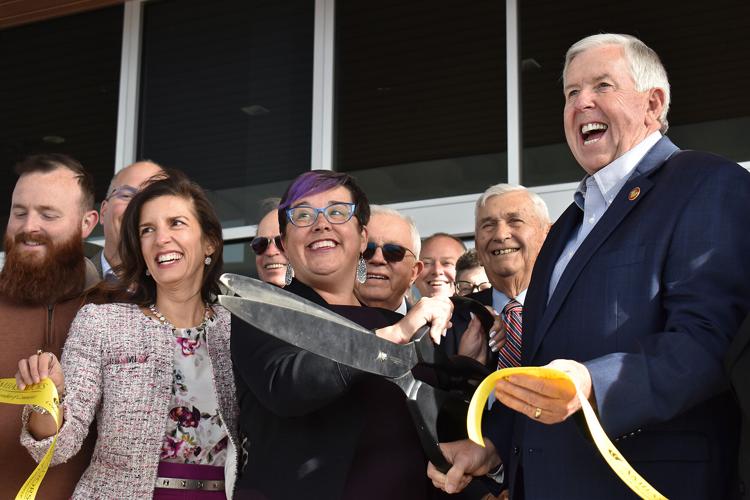 From left, Jefferson City Mayor Carrie Tergin, Columbia Mayor Barbara Buffalo and Gov. Mike Parson cut the ribbon, signaling the opening of the new terminal at the airport Wednesday at the Columbia Regional Airport in Columbia. This ceremony commemorated the end of construction on the new building, allowing officials to open it up to the public and get ready for the first flight coming in on Oct. 26. 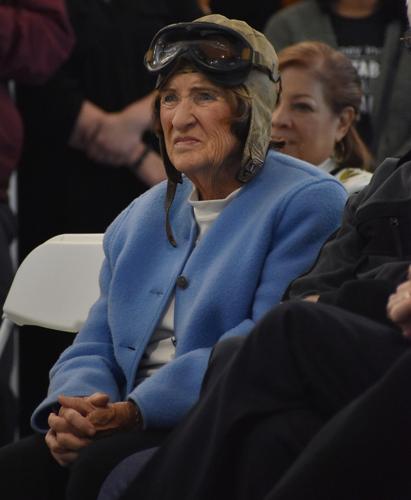 Judy Elliott observes the ceremony wearing her grandfather’s flight goggles Wednesday at the Columbia Regional Airport in Columbia, Mo. Her grandfather was a Barnstormer and wore those goggles in flight. 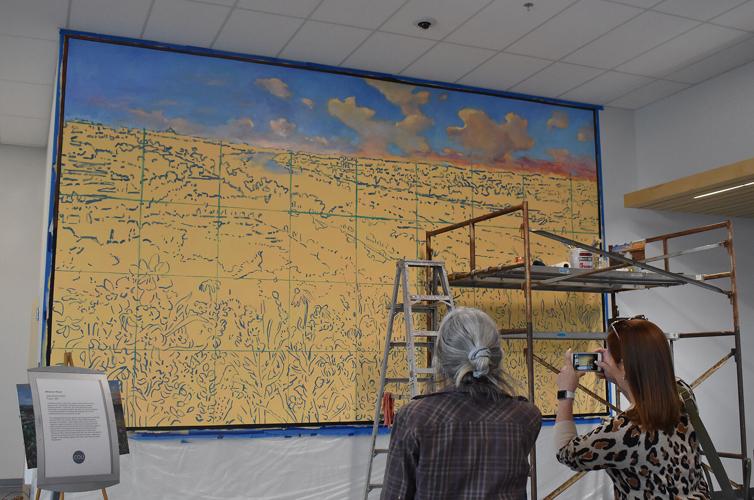 People talk with the artist and take pictures of the mural underway in the new terminal at the airport Wednesday at the Columbia Regional Airport in Columbia. Artist Jane Mudd plans to finish the project in the next five days. 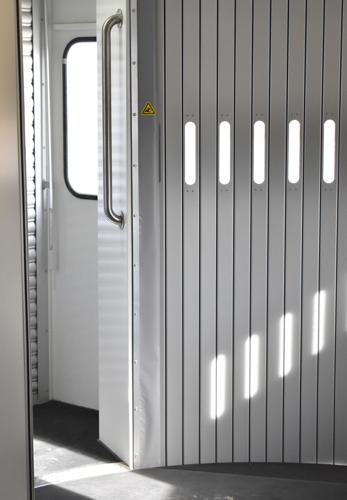 Light filters through the jet bridge inside the new terminal at the airport Wednesday at the Columbia Regional Airport in Columbia. This is the only opportunity the public will have to walk freely through the terminal before security is put into place. 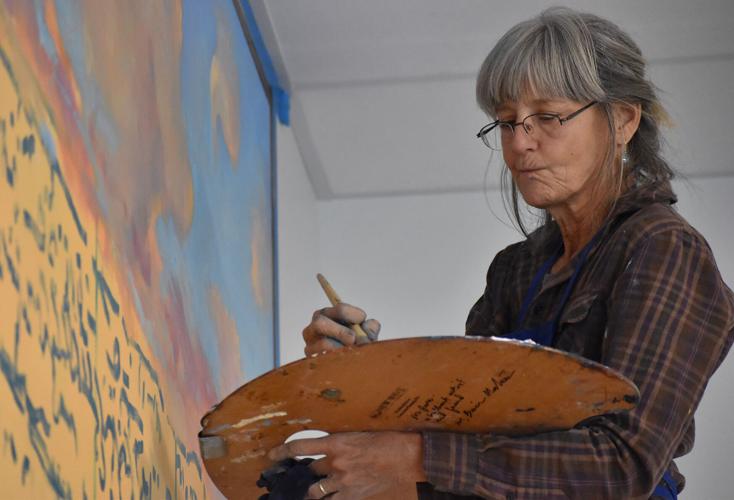 Local artist Jane Mudd works on the mural in the new terminal at the airport Wednesday at the Columbia Regional Airport in Columbia. Mudd is using her original smaller painting of the Missouri River as the inspiration behind her mural. 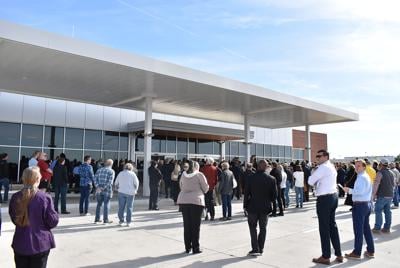 The new $23 million terminal at Columbia Regional Airport officially opened Wednesday, with flights set to pull up to the gates Oct. 26.

They took turns praising the amenities in the terminal and thanking those involved in the planning and construction of the building.

Parson said when he arrived at the new terminal from Kansas City on Wednesday, he exclaimed, “Now, this feels like an airport!”

Roughly 280 men and women worked on the terminal over the two-year period — two years to design and build, including more than a year on site.

The new terminal, which is more than triple the size of the original terminal, has added a number of new amenities:

• Two TSA equipment lanes instead of one will provide more efficient security screenings for passengers.

• After security, passengers will walk to four new boarding gates with expanded seating and charging stations to await their flights.

• More spacious restrooms on both sides of the TSA screening are available to guests and passengers.

• A sensory room with sound-dampening walls, ceilings and floors will serve passengers who desire a quiet space.

• A service animal and pet relief area complete with flushing turf and an artificial fire hydrant has been set up for four-legged travelers.

• Mothers will have a privacy station and baby changing table to use.

• Soon, a restaurant and bar will be opening at the terminal for travelers to enjoy a meal and a drink. More details were not provided during the opening.

American Airlines remains the only airline in service at Columbia Regional Airport, with flights to Chicago O’Hare International and Dallas-Fort Worth International.

American Airlines representative Dan Morris said Wednesday he was proud of the new terminal and praised the teamwork of those involved in its creation.

“Things like this don’t work without partnership,” he said, thanking former mayors Brian Treece and Bob McDavid, as well as current mayor Barbara Buffaloe, for their leadership.

The ceremony began with statements from Mitchell Fuemmeler of Nabholz Construction, thanking the men and women who spearheaded the project.

Fuemmeler noted that the terminal was built with Columbia’s growth in mind.

“The large entry way and open windows are the intuitive wayfinding tools that use views to guide passengers,” Fuemmeler said.

Inside the terminal, guests can expect to see several works of art by national, regional and local artists, including Columbia painter Jane Mudd.

Mudd is in the process of creating a mural of the Missouri River on the north wall next to the ticketing counter.

“Honored” was how Mudd described being chosen to paint the mural in the new terminal, and she said she hopes to complete her work in a month or two.

Tootie Burns, a 10-year member of the city’s Standing Committee on Public Art, pointed out that Mudd was on the scaffolding, working on the mural during the ceremony.

“It’s exciting to see the work come to fruition, and the new terminal will make a much better impression on visitors to Columbia,” Burns said.

As one of the largest capital projects for the city, University of Missouri System President Mun Choi said the new terminal will also help the university become a destination for health care in mid-Missouri.

Ray Beck, a former city manager and public works director who initiated the purchase of the airport land in 1960, said the terminal will be “wonderful for the city and region.”