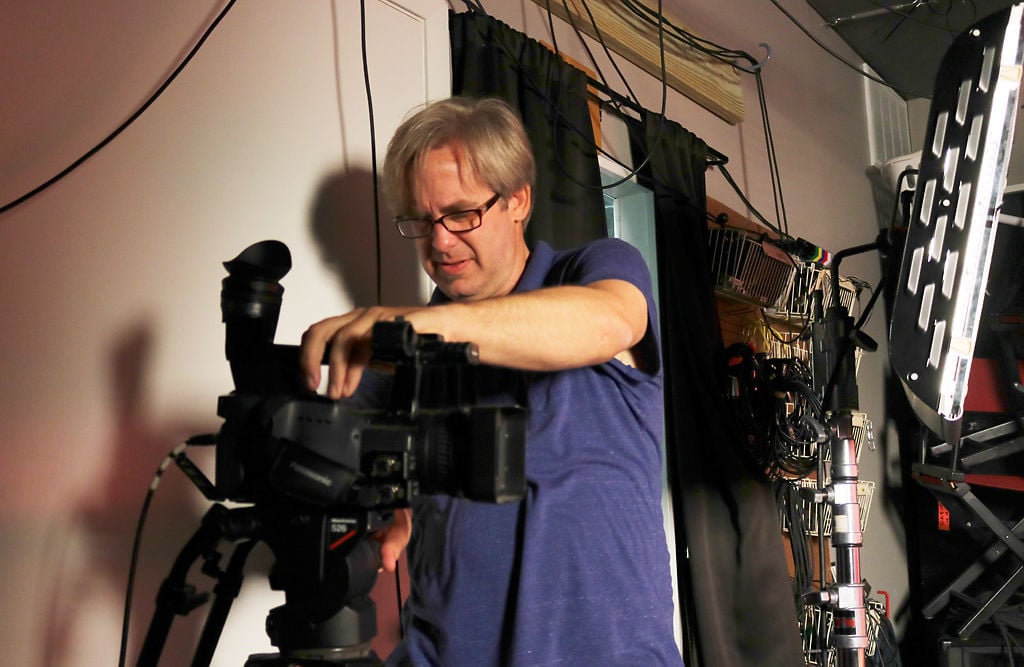 Sean Brown, managing director of Columbia Access Television, sets up a video camera Saturday in the CAT studio. CAT is a nonprofit that seeks to empower people to share their voice with the community. Members pay a monthly fee and are able to use the studio and software and rent equipment for free. 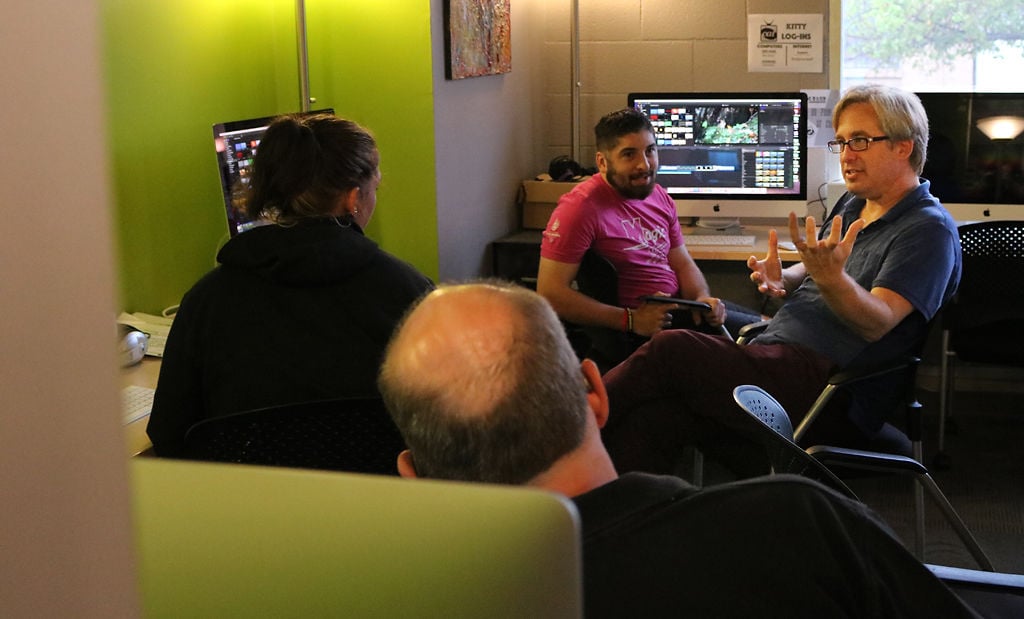 Sean Brown, managing director of Columbia Access Television, talks to Charlie Phillips, Shaquana Hobbs and Allen Tobin during a video editing class Saturday at CAT. Phillips, Hobbs and Tobin are part of Special Olympics Missouri, which has been collaborating with CAT since 2014. The group tries to be in the CAT studio quarterly to work on videos. 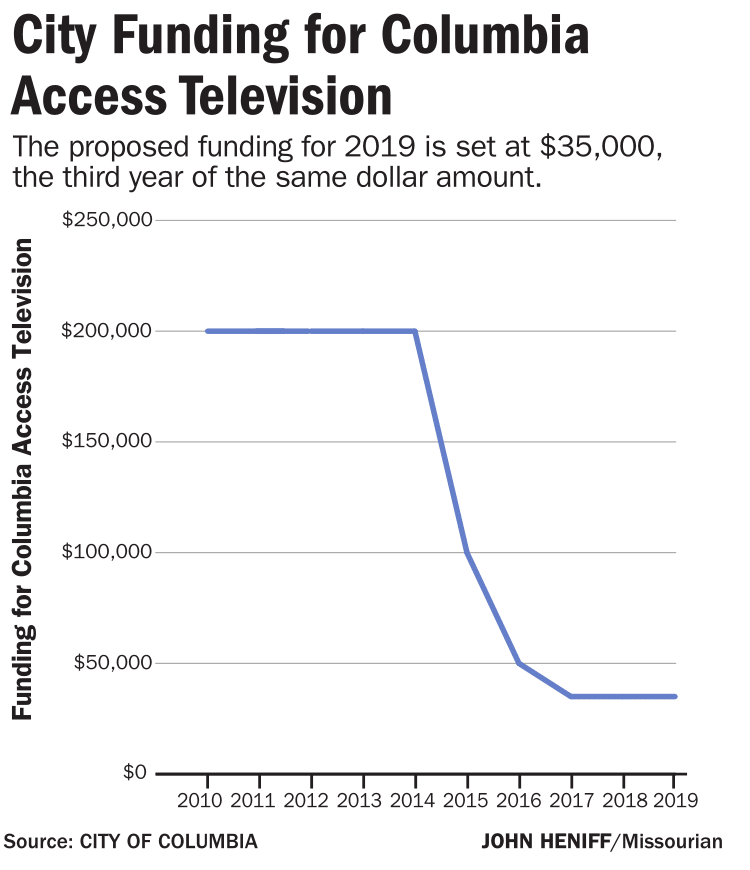 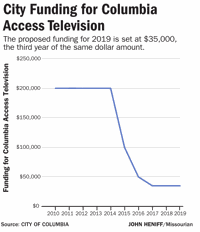 The proposed funding for Columbia Access Television in 2019 is set at $35,000, the third year of the same dollar amount.

Sean Brown, managing director of Columbia Access Television, sets up a video camera Saturday in the CAT studio. CAT is a nonprofit that seeks to empower people to share their voice with the community. Members pay a monthly fee and are able to use the studio and software and rent equipment for free.

Sean Brown, managing director of Columbia Access Television, talks to Charlie Phillips, Shaquana Hobbs and Allen Tobin during a video editing class Saturday at CAT. Phillips, Hobbs and Tobin are part of Special Olympics Missouri, which has been collaborating with CAT since 2014. The group tries to be in the CAT studio quarterly to work on videos.

The proposed funding for Columbia Access Television in 2019 is set at $35,000, the third year of the same dollar amount.

Situated quietly alongside South Providence Road, Columbia Access Television is distinguished only by the bright green CAT logo affixed to the outside of the building.

Behind the reflective door of CAT’s Suite A, which managing director Sean Brown calls “the heaviest door in town,” lime green walls frame a hub of six iMacs and a 56-inch television tuned to CAT, Columbia’s public access cable channel. On the screen is a video of hummingbirds drinking from a hummingbird feeder, which Brown says he filmed himself at a friend’s house in Rocheport.

Although both of CAT suites’ south-facing walls are made entirely of one-way reflective glass, Brown has effectively blocked out all the windows in Suite B where original CAT content is filmed. He spray-painted several foam panels in black then taped them to the inside of the windows. It’s nothing fancy, but it’s effective.

Two-by-fours hang from the dropped ceiling with wire and support Fresnal lights suspended over a makeshift stage. Black, quilted sound blankets hang over the foam and shield the studio from virtually all outside noises. The space can fit four people comfortably, Brown said, and it’s where the League of Women Voters’, “The League Presents,” is taped.

CAT moved to the suites at 20 N. Second St. last year from its Tenth Street location and studio at Stephens College as a way to save money. Although it has less space — 450 square feet rather than the 2,500 it had at Stephens — the new location saves the organization $400 a month.

Saving money is important for CAT. Funding has been a recurring problem for the station since a contract with the city that gave them $200,000 per year for five years expired.

As a consequence, CAT’s staff between 2014 and 2016 has been cut from four full-time employees — executive director, chief engineer, programming director and membership and equipment coordinator — to one full-time job, managing director.

Brown said CAT generates about $21,000 annually through things such as membership fees, class fees and media services, in addition to private donations, which amounted to $2,700 in fiscal 2017.

Those services include promotional material for Thumper Entertainment’s Roots N Blues N BBQ Festival as well as various talk shows, such as “The League Presents,” which the League of Women Voters pays $100 for 30 minutes of studio time, and Arts Focus by the city’s Office of Cultural Affairs, whose studio time is part of CAT’s contract with the city.

These media services also include hiring freelance videographers, many of whom received training at CAT, to produce videos for other local nonprofits.

Memberships are $30 for students, seniors and military personnel and veterans; $65 for individuals; $150 for up to five members of nonprofits; and $250 for up to five people from families or businesses. Brown thinks CAT might have to increase those fees.

Pat Holt, who became a CAT member in January 2013, uses CAT equipment to edit videos she makes. One of her first dabbles in filmmaking saw her dressed in a Winnie the Pooh costume with a GoPro strapped to her head while she walked around Columbia on Halloween.

“That’s kind of the way my film career has been,” Holt said. “I’ve just tried things to see how they happen, how they work. I’ve had a lot of fun with CAT.”

Holt’s videos range from autobiopics such as “Pat’s Life,” in which she describes her early life in New York, her time spent serving in the Marine Corps and her role in the chicken-picture calendar business, to political calls to action such as “Vote,” in which rotating portraits of Holt repeat the words “vote” and “register” into the camera. She also produces political folk music videos. Holt’s videos are almost entirely edited at CAT.

Holt placed third at the True/False Film Festival in 2017 for her film “Frank Bench,” a silent film about the first person to commercially sell sliced bread in Chillicothe, Missouri, which also ran on CAT, and was also accepted to the Citizen Jane Film Festival for her “experimental rap” film “Gonna Doit.”

Many of Holt’s contributions fit in well with other CAT content, which can range from a segment of people recounting near-death experiences called “Close Calls,” to short films, such as “Eating Lunch,” where a sped-up video shows two people dressed in all black and eating fast food, to footage of local events, such as the MO Jazz Festival.

Linda Green, who also uses CAT regularly, has been a member for five years and regularly checks out equipment to film events.

Most recently, she used CAT equipment to film several events during “Citizens University,” which she described as an event that teaches people how to become an effective activist. It included sessions such as “Difficult Conversations & Effective Listening,” “I Care, Now What?” and “Social Media for Advocacy.” Holt helped with editing.

“You’ve just got to have the truth out there, and people have to have access to the truth, so this is one big way you can do that, with CAT,” Green said, “I just think it’s of tremendous importance.”

Brown, who began his career in public television working at Columbia’s City Channel, said the value of CAT goes beyond being a television channel.

“We feel that it’s a social equity situation where we’re providing what many people cannot afford, and if you can’t afford that and you don’t have access to it, then it possibly means that you’re being silenced,” Brown said.

Last week, the Columbia City Council voted 5-2 against an amendment to the fiscal 2019 budget proposed by Fourth Ward Councilman Ian Thomas, which would have given CAT $30,000 on top of the $35,000 already allotted, using money from fiscal 2018 council reserves.

Thomas is also interested in eventually restoring CAT’s budget to $100,000 per year, but his council colleagues remain steadfast.

Fifth Ward Councilman Matt Pitzer said he empathized with the cause but couldn’t quite justify the amendment given the council’s struggle to find money for city employee pay raises.

“I’m not comfortable with the commitment that I think this extra grant implies of trying to find that $100,000 of annual funding,” he said at the Sept. 4 meeting.

Third Ward Councilman Karl Skala cited KOPN/89.5 FM, a public radio station, as an operation that’s been able to develop a self-sustaining source of income. Brown, however, doesn’t see that as a viable option for CAT as long as he is the only full-time employee.

Brown said any additional money CAT might receive from the city would be put toward hiring a new staff member. A part-time employee would cost around $14,000.

“I feel like we’ve become very efficient, streamlined and just kind of gotten to what we need to be doing,” Brown said. “So if I had another full-time employee with me — I mean I’m not going to say we could double that amount — but we could certainly achieve a great deal more, if you’re comparing percentages, to what we were when we had a staff of four.”