These are some of the incidents involving the Kappa Alpha Order fraternity reported to MU since Jan. 1, 2015, according to documents obtained by the Columbia Missourian.

The Missourian requested the documents under Missouri's Sunshine Law after Kappa Alpha Order was suspended for a vodka-chugging hazing incident that occurred in September. The chapter is under investigation by MU.

The 95 pages of documents include reports submitted to MU's Office for Civil Rights and Title IX and Office of Student Conduct involving the fraternity; correspondence between MU and chapter representatives; and correspondence between MU and national Kappa Alpha Order fraternity representatives. Police reports were requested to supplement information found in the documents.

The following are all the incidents Kappa Alpha Order, at 1301 University Ave., was involved with over a 22-month period.

When members of the Office of Student Conduct were emailed for responses or comments, they deferred to MU spokesman Christian Basi.

In a letter sent to Kappa Alpha Order dated Oct. 14, Julie Drury, senior coordinator of the Office of Student Conduct, said she had some information about the fraternity's possible involvement with an Aug. 28 incident at FarmHouse fraternity. The incident involved providing alcohol to minors.

Drury wrote that she would not pursue charges against Kappa Alpha Order. "However," she wrote, "I think it is most important that the members of your organization realize the possible consequences of their actions."

About 300 people were invited to a party on the first weekend of the semester, according to disciplinary hearing notes. Kappa Alpha did not card party attendees and said it was a "bring your own beer" party.

Drury wrote to Lisa Crader, executive assistant in the Department of Student Life, in a Sept. 7 email that Kappa Alpha Order served mixed drinks — even though the fraternity claimed to be checking for hard alcohol at the door — to minors at the party.

The fraternity was found responsible for providing alcohol to minors and was placed on disciplinary probation until Dec. 20 and charged a $250 judicial processing fee. Kappa Alpha was also required to attend a "Raising the Bar for Greek Students" alcohol education program by the Wellness Resource Center. Eighty percent of the chapter members were required to attend.

Handwritten notes dated March 23 document alleged hazing incidents reported by a Kappa Alpha Order pledge by phone. Basi confirmed the notes were taken in 2016. It is unclear who took the notes, but he said they would have been investigated and followed up on by the proper office. There is no evidence of actions taken.

The notes are scanty but state the pledge reported being kept up for 48 hours straight, smoking marijuana and using other drugs, his grades dropping, parties Wednesday through Friday, and people bragging about Quaaludes and Xanax in a car.

The notes also include a line about molasses and flour, but do not elaborate.

The caller is quoted as having "survived KA." The words "now in mental hospital" and "almost died?" appear together in the notes.

No other documents reference this phone call. 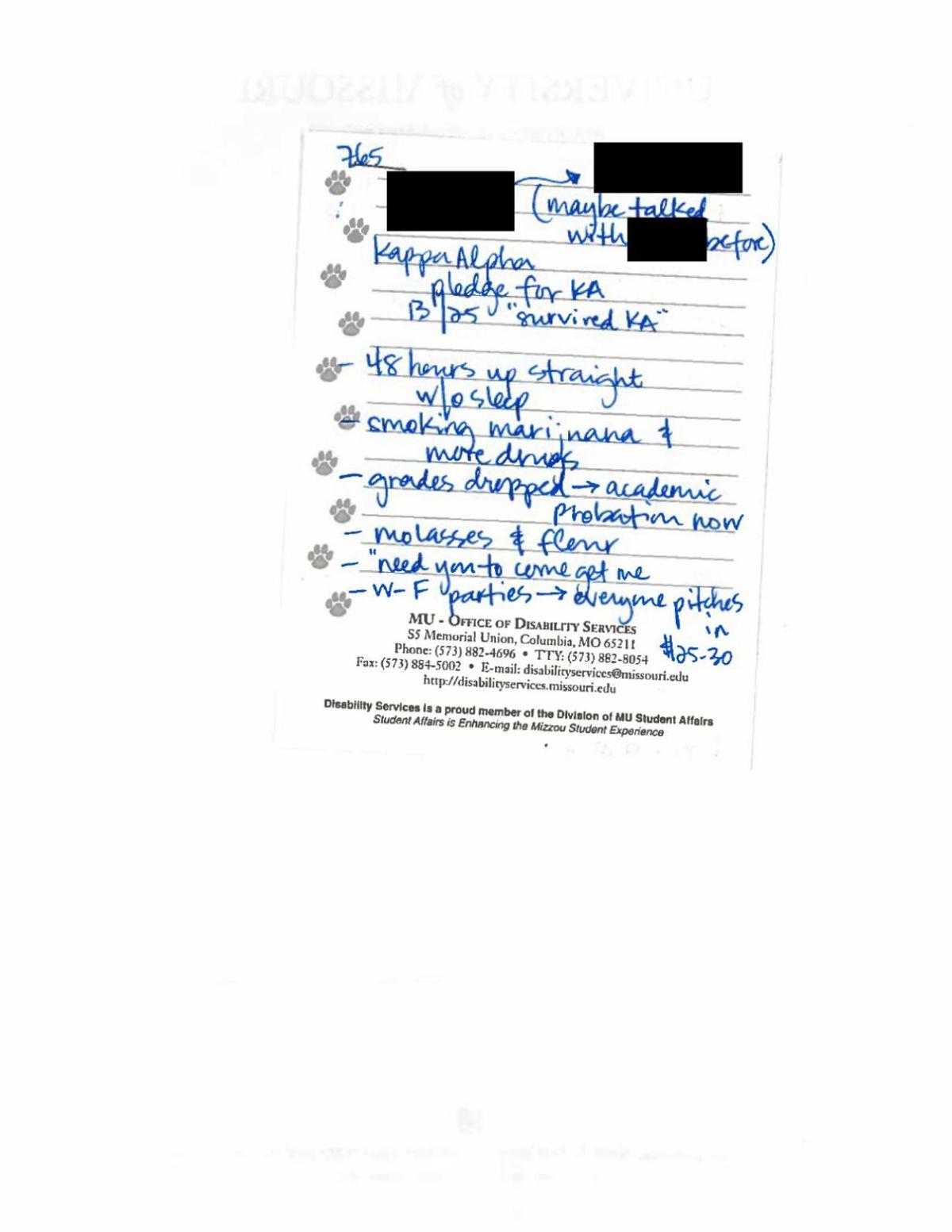 An MU police officer responded to a call around 2:26 a.m. at Dogwood Hall about an intoxicated female student in the lobby who didn't live there. Department of Residential Life staff member Katie Partridge made the report.

When the officer arrived, the female was sitting in a chair in the lobby, swaying. She could not respond to the officer's answers coherently, according to a police report. Her speech was slurred and she mumbled.

The female began to vomit red liquid and chunks of fruit as the officer asked her questions. The officer called for a medical response, and she was taken to University Hospital for treatment and evaluation.

While the pair waited for medics to respond, the female told the officer she had drunk a "couple beers, vodka and possibly some tequila" at Sigma Chi, Alpha Chi, Sigma Alpha and Galena Hall.

A handwritten note on the police report reads "handles of Burnetts (sic) at KA."

Kappa Alpha Order was investigated for providing alcohol to a minor, having handles of alcohol at the house and violating the Interfraternity Council's alcohol policy.

The fraternity was found not responsible.

Alcohol policies of the fraternity, included in the documents obtained by the Missourian, state "the possession or use of hard alcohol is not permitted in the chapter facilities (house and annex) or on the property, except for alumni events registered with Greek Life."

Only individually purchased beer — not kegs — are allowed in chapter facilities for members and guests 21 and older, according to IFC policies.

"I was just sitting in the car when I see what I assumed to be the entire Kappa Alpha fraternity running around, and I heard lots of yelling so I stepped out of the car, and I see my boyfriend being held in a headlock with over 20 people surrounding him and are just punching him in the face, ribs, head and would not stop," the student wrote.

The student started screaming for the group to stop. One man threw a cup full of alcohol at the student. Others recorded the beating with their phones.

The group of students continued to head-butt and punch the boyfriend despite the presence of a security guard. The other friend tried to run away but was chased down by four students. They took his wallet and all his money.

Both the boyfriend and friend ended up in the hospital with concussions, the student wrote.

"(The students) were acting like animals it was the most insane thing I have ever seen," the student wrote. "Please get back to me ASAP."

In an email chain in response to the student's story Crader called for the security guard at the scene to be fired. "This is totally inexcusable," she wrote.

Firing the security guard would be a personnel issue in the security firm, Basi said, so the Office of Student Conduct did not know the outcome of the situation. 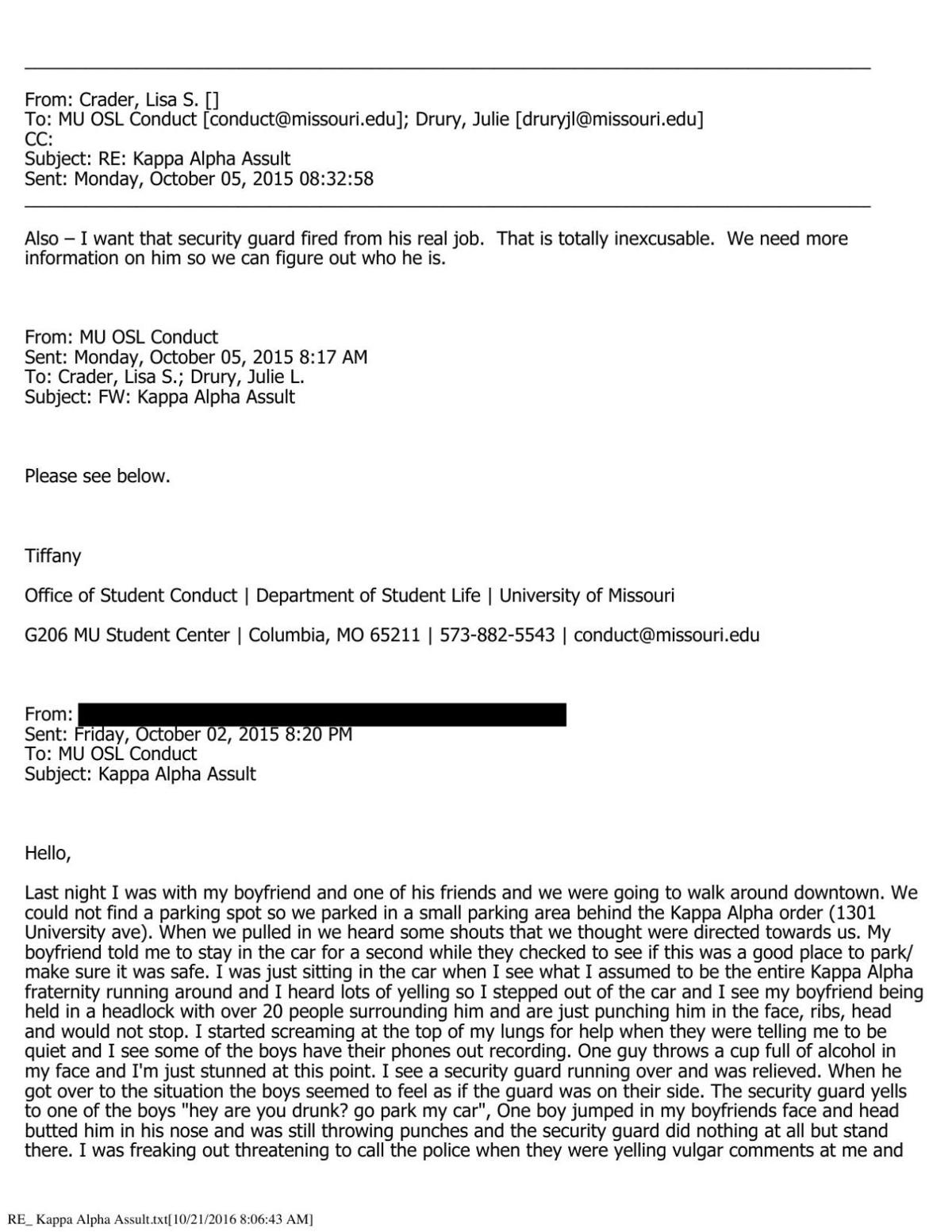 Two MU police officers responded to a call at 12:54 a.m. in parking lot WG-6 at 1009 Tiger Ave. When they arrived at the scene, another officer and two security officers were standing next to a black 2010 Hyundai Genesis, which smelled strongly of marijuana. Two students, a male and a female, were standing outside the car while another female was passed out in the passenger seat. She is described in the police report as not wearing underwear, but the report doesn't state whether she was naked from the waist down.

Paramedics removed the woman from the vehicle and took her to University Hospital. One of the two people with her was arrested for possession of less than 35 grams of marijuana, drug paraphernalia and a fake ID. The other person was allowed to leave the scene.

The man arrested told the officers that the female subject was "just a friend of one of my friends."

The officer then asked him how she ended up in the car: "She just needed; they were like 'Hey, this girl's really drunk, she needs a ride home.'" All three students were at party at Kappa Alpha Order, he told police. The other person had seen the woman vomiting and had wanted to help her.

The woman remained unconscious until about seven hours later, so officers couldn't speak to her, according to an email chain between MU Police Chief Doug Schwandt, Vice Chancellor for Student Affairs Cathy Scroggs and Mark Lucas, dean of students and director of student life.

"(Schwandt)'s very concerned this may not turn out well," Scroggs wrote in an email to Lucas.

On April 27, a detective followed up with the woman. She stated she'd been drinking at Kappa Alpha but had not been assaulted.

Kappa Alpha Order was found responsible for failing to comply with university policies, state and local laws and condoning the use or possession of alcoholic beverages or controlled substances. The fraternity was ordered to participate in a bystander presentation from the Wellness Resource Center. According to the charge letter, only 75 percent of the total number of fraternity members were required to attend. The fraternity was also fined $450 for "judicial processing." 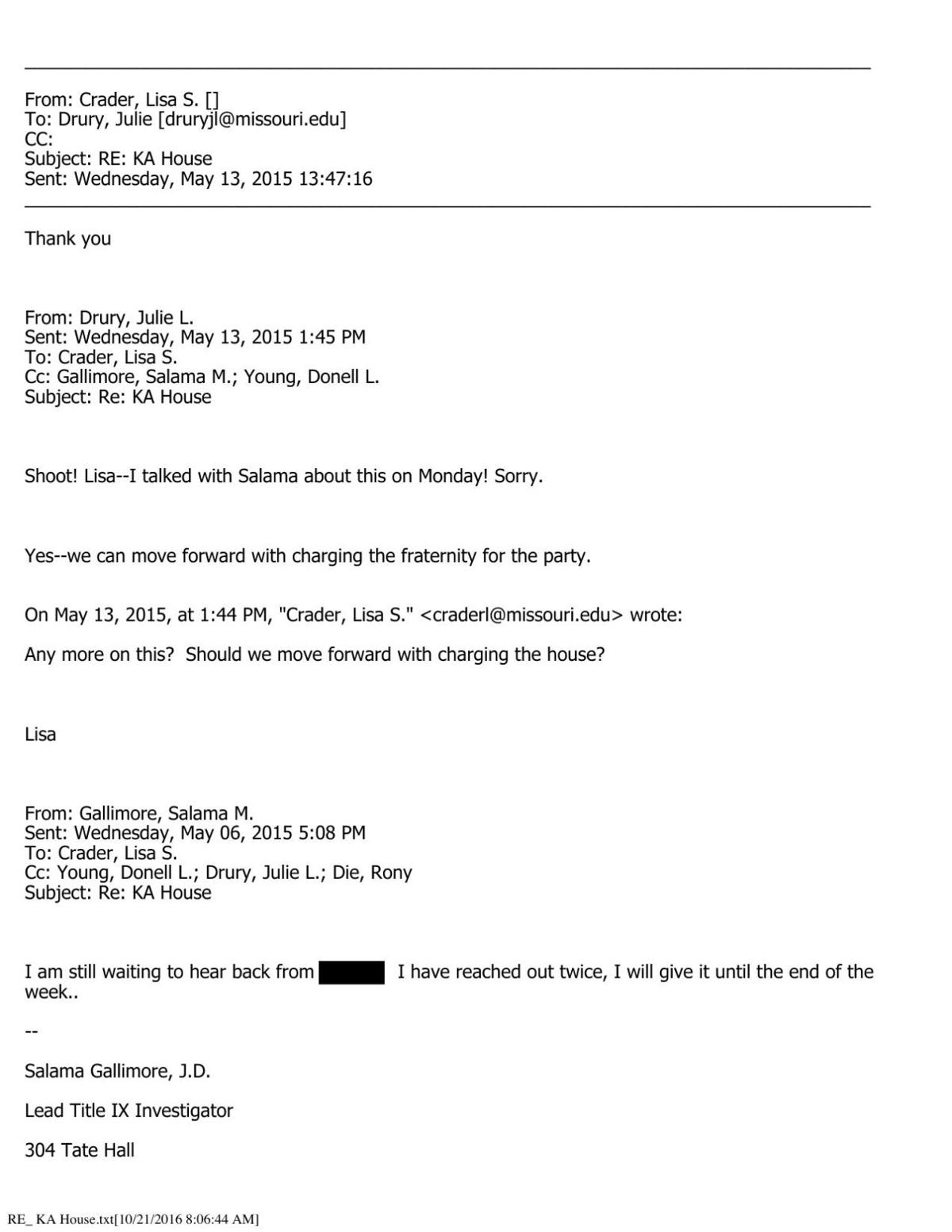 Further correspondence between Lucas and a chapter member reveal some bargaining between the university and the fraternity.

"I ruled on the case in the way that I did because you assured me that you would take certain action against the individual student" who was arrested for possession of marijuana, drug paraphernalia and a fake ID, Lucas wrote on June 4, 2015. "I'm just following up with you to determine what you did."

"You're welcome, and thank you for ruling on the case the way you did. My executive board and myself are committed to making sure KA remains a safe experience for students moving forward, so your decision will not go without caution toward this upcoming fall semester."

The email later stated the arrested Kappa Alpha Order member would be expelled if he returned to MU for the next semester. There was some question as to whether he would.

That student is now listed in the online directory as a University of Missouri-Kansas City student. 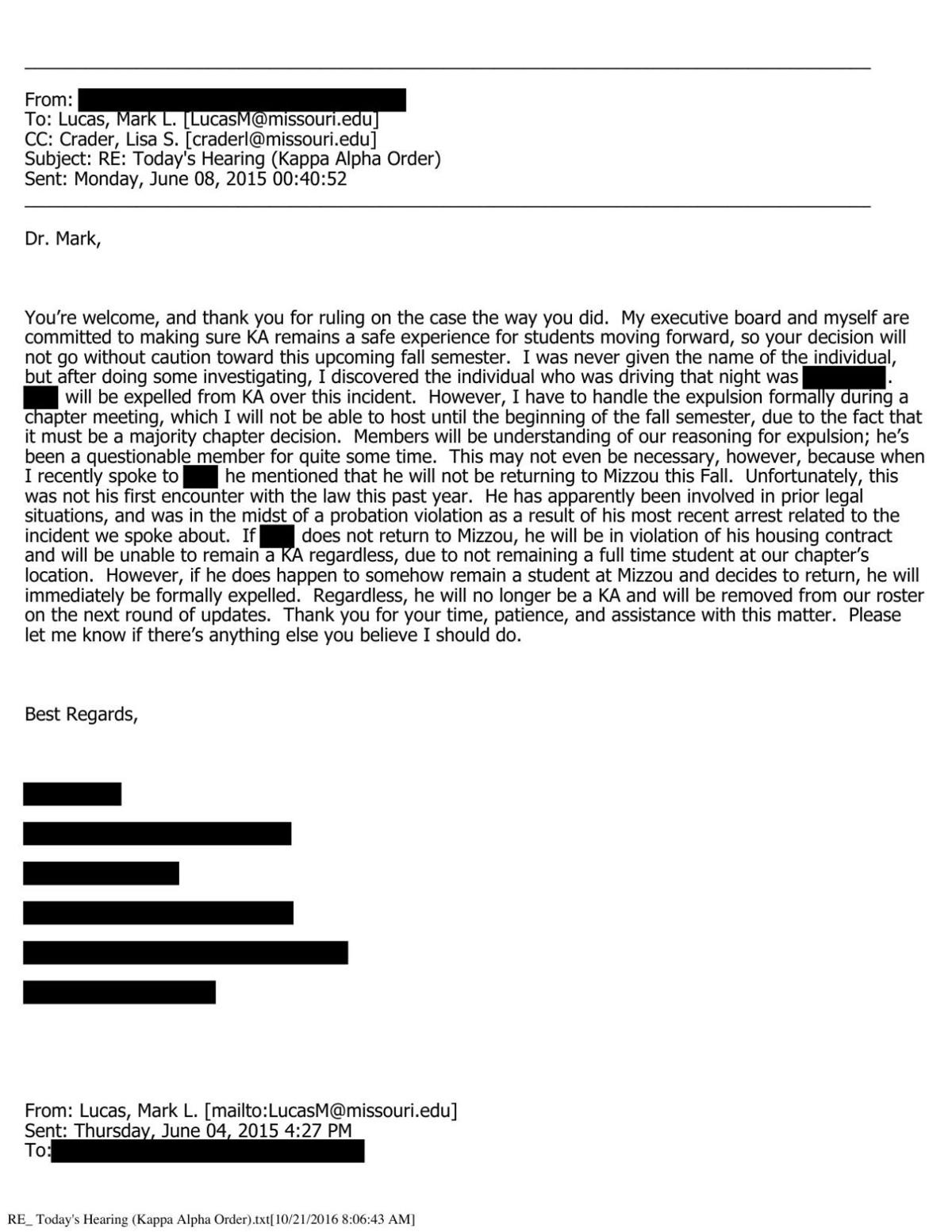 An 18-year-old had been "drinking to the point of being transported by ambulance to a local hospital," according to Columbia police.

Columbia Police have jurisdiction over fraternity houses, but not the streets in front of them, which MU police are in charge of. But many MU fraternities have hired security guards and bar police officers from entering their houses, Columbia Police Deputy Chief Jill Schlude said.