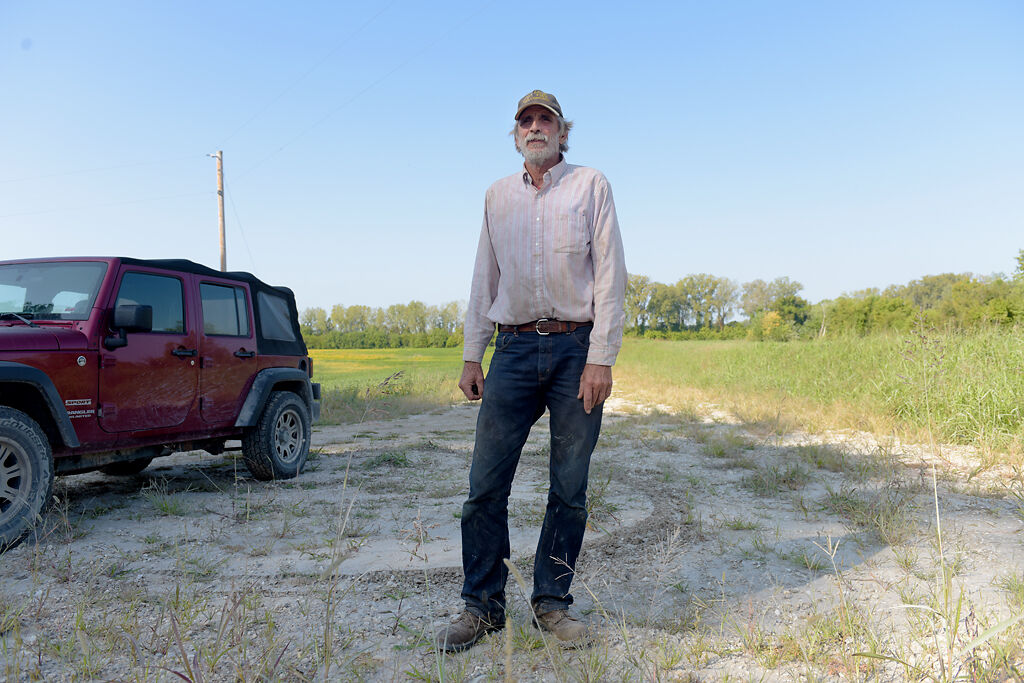 Stephen Diederich standsfor a portrait stands on a closed portion of Harold Cunningham Road in the Wilton bottoms near the Missouri River in southern Boone County. Diederich is president of a levee association whose members are upset that the road remains closed and that they haven’t been reimbursed by county government for emergency repairs they made in 2019. flooding.

Stephen Diedrich poses for a portrait 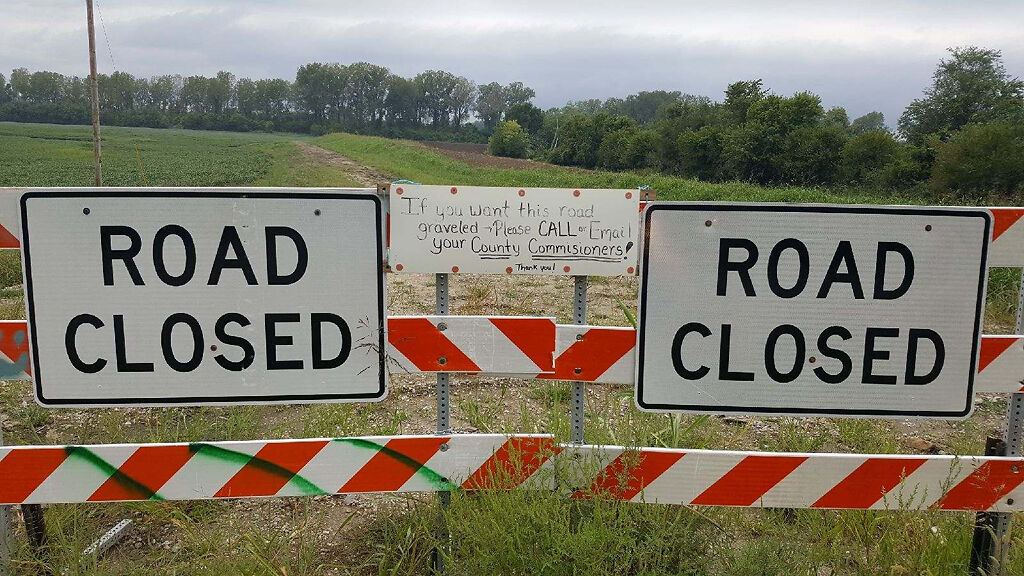 “Road Closed” barriers stop drivers where Harold Cunningham Road meets Rippeto Road in the Missouri River bottoms. A short section of Harold Cunningham Road that connects it with South River Road has been closed since last year’s flooding. A handmade sign encourages residents to contact the Boone County Commission if they want the county to put down gravel. 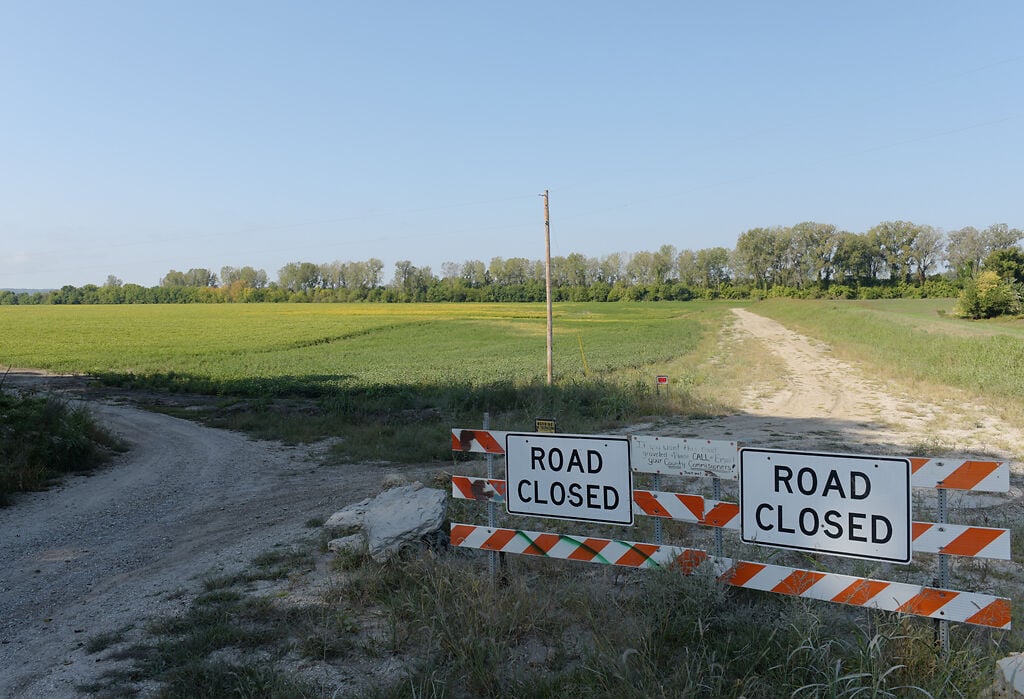 Road closed signs sit on a patch of private property Thursday at the Wilton river bottoms in Boone County. The road has been closed since flooding broke a nearby levy and a land dispute has stopped regraveling efforts. 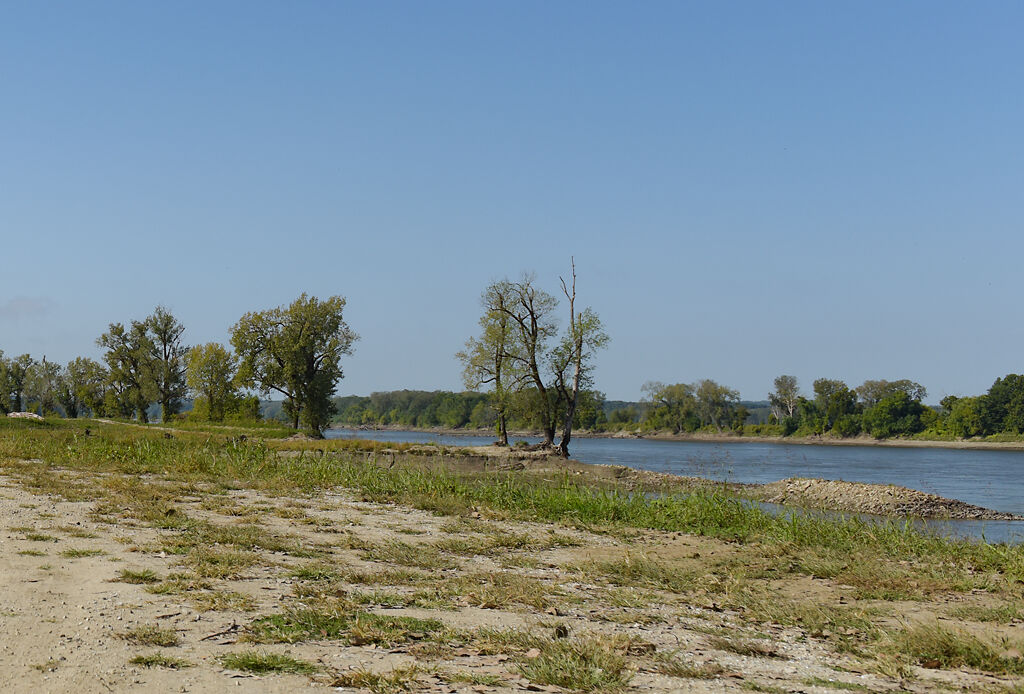 The Missouri River flows past a levee in the Wilton bottoms that was destroyed by flooding in 2019. The county has yet to restore a section of road that runs atop the levee because of a dispute with landowners in the Wilton area who want to be reimbursed for emergency repairs they made last year. 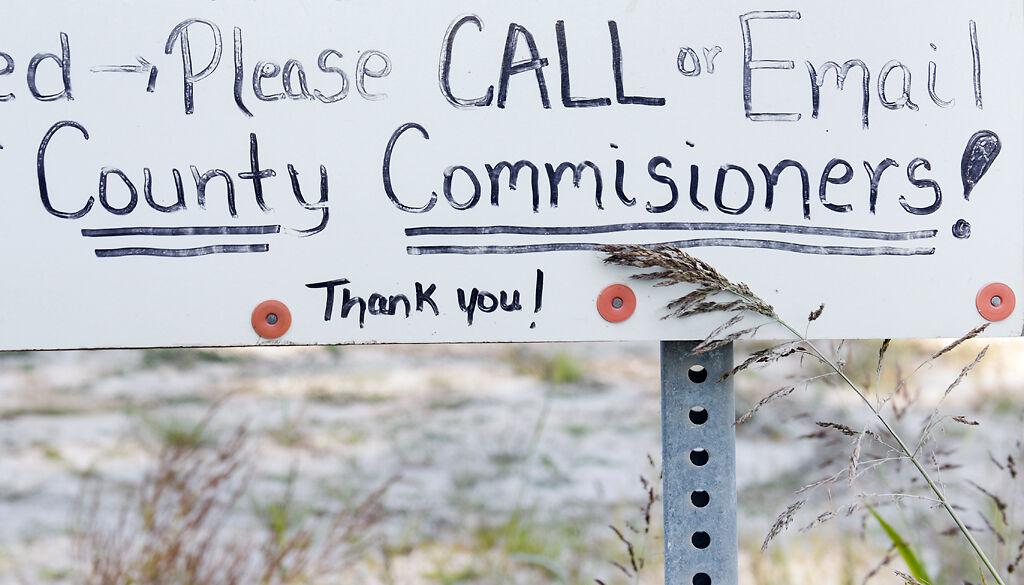 A sign encourages residents to call Boone County Commissioners if they want gravel applied to a closed section of Harold Cunningham Road near the Missouri River.

Thursday proved to be a watershed day in a long-standing dispute between the Boone County Commission and the Wilton Landowners Levee and Drainage Association, whose members have been asking the county for months to reimburse them for the cost of fixing roads in the Missouri River bottoms after prolonged flooding in 2019.

The association, whose members primarily are river bottom farmers, rushed in July 2019 to fix a 100 feet by 100 feet scour hole 21 feet deep near the Rippeto Road bridge over Bonne Femme Creek, immediately north of where Rippeto intersects with Harold Cunningham Road. They feared delaying the repair would put the bridge at risk of collapsing.

The association also had to rebuild a levee that, along with a 1,600-foot section of Harold Cunningham Road that connects with South River Road at the Katy Trail, was washed away by the flood.

It cost $37,973 to fill the scour hole, levee association president Stephen Diederich said. The association gave the county an invoice for that work in the summer of 2019, along with two more for work done later that summer to repair Harold Cunningham and Rippeto roads.

The association also realigned its levee according to the Boone County Road and Bridge specifications so the county could lay rock on top of it and restore the section of Harold Cunningham Road that got washed away. Those charges amounted to $10,495 and $28,045, respectively, according to the minutes of a Dec. 5 Boone County Commission meeting.

More than a year after those repairs were made, the county has made no reimbursement and has not put the gravel down, leaving sections of Harold Cunningham and River roads closed. The reasons why are complicated.

First, the county says it can’t lay the rock because it lacks the easements necessary to do so on the private land that the levee and the roadbed are on. The landowners have declined to provide those easements, both because of the reimbursement rift and because they believe the easements sought by the county are too restrictive.

The commission has told the landowners for months that they can’t reimburse them for the work they did unless and until the Federal Emergency Management Agency approves its request for disaster assistance.

On Thursday, more than a year after the flooding subsided, FEMA agreed to obligate an amount equal to 75% of the cost of fixing the scour hole. Plans call for that money to be forwarded to the levee association. Reimbursement for the other work remains in question.

“Road Closed” barricades block the closed section of Harold Cunningham Road on the east and west. Handwritten signs attached to the barricades ask residents to email commissioners if they want the gravel road restored.

Although River Road between Harold Cunningham and Higdon roads is also declared closed, its gravel surface is in good shape.

Stephen Diederich, who along with his family farms hundreds of acres of the bottomland near Wilton and Hartsburg, said the unfinished road is a hazard. He said people continue to cross it on motorcycles, bicycles and in pickups.

“You have to drive off the levee, along the base of it, and then up over the other side to get back on the road,” Diederich said, adding that a vehicle could easily roll over if its driver didn’t get the angle correct.

The Wilton Bottoms is a picturesque stretch of farmland along the Missouri River. Hundreds of acres of corn are drying after the summer growing season, while seas of soybeans and sunflowers continue to thrive. The fertile soil is a boon to crops, but the low-lying land is vulnerable to flooding.

“It was one of the worst floods we’ve seen in the history of the county,” Boone County Southern District Commissioner Fred Parry said. Extensive damage led to the county being included in a federal disaster declaration approved by President Donald Trump, according to a previous Missourian report.

Diederich said the damage caused by the flood created an emergency.

“We needed to do something because the river could come in real easy,” said Diederich, who is president of the Wilton Landowners Levee and Drainage Association. He said the roads were so badly damaged that one landowner, Jamie Morris, had to make a 20-minute ATV ride through the woods to access his driveway for more than six weeks. 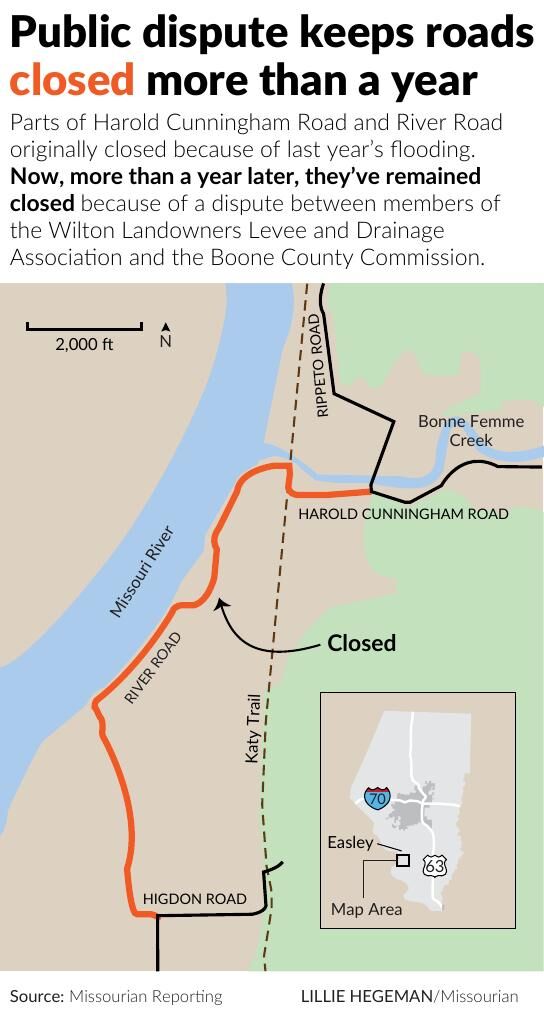 Diederich said Parry encouraged him in the summer of 2019 to attend a Boone County Commission meeting to discuss the potential role of the association in fixing the section of Harold Cunningham Road that ran on top of the levee before it was destroyed. Diederich did just that July 9, 2019.

That’s when the commission advised him to keep a record of the association’s time and money spent fixing the road, according to the minutes of the meeting.

“After I met with the county commission, they brought us dump trucks to haul fill material, and I figured things had been taken care of,” Diederich said. He recalled that the association worked under the supervision of the Road and Bridge department, including Superintendent Bryan Boyce and Director Greg Edington, to rebuild and realign the new levee to make it wide enough to restore the public road.

“Greg and Bryan were coming by, and I built the road to the dimensions they told me,” Diederich said.

Diederich said the association never expected the county to reimburse it for rebuilding the private levee, except for the additional work and expense it took to make it wide enough for the road.

“The county came in and graveled one small section of the road where they had an existing easement, but most of it wasn’t done because there weren’t easements in place,” Diederich said, explaining that the new levee was built over some landowners’ private property. That meant the county couldn’t restore the road without easements.

Several landowners attended the December commission meeting to inquire about the status of their reimbursement. They were told they needed to have submitted a bid to the commission before going ahead with the emergency repairs.

“All the commissioners know that anything over $6,000 has to be bid through the purchasing process,” Parry said.Diederich said that nearly three months after the repairs had been made, that was the first time the commission had mentioned anything about needing a bid.

Presiding Commissioner Dan Atwill at that meeting praised the association’s work as “amazing” and said it was an enormous job to undertake, according to the meeting minutes. When association member Joe Bullard asked why the county couldn’t reimburse them without ’s approval, Atwill said the county wasn’t in the position to reimburse the landowners from general revenue for personal expenses incurred after a natural disaster.

Parry called ’s decision Thursdayto help pay for the scour hole repair “a breakthrough.” He said is still reviewing whether to provide money for the levee/road project but is reluctant because rules say disaster aid can only be awarded after the road has been returned to “pre-disaster conditions.”

“One of the complications is that this land just floated down river and vanished into thin air,” Parry said.

Commissioners are working with 4th District U.S. Rep. Vicky Hartzler, R-Harrisonville. She has petitioned to initiate a congressional inquiry into the matter.

Parry met with representatives Friday on behalf of the association and argued that “it would have been impossible for the levee to be rebuilt on public property at the time because the original land had floated away.”

As for the cost of fixing the scour hole, Parry plans to ask his fellow commissioners to reimburse the association for the 25% the money won’t cover.

“I have a lot of empathy for the neighbors, and I’ve been working hard to get things moving,” Parry said, adding that although business in the county often is done with a handshake, county government has to use due process when public money is involved.After learning of Thursday’s decision, Diederich said Friday that once the county commission allocates the money to the association, he thinks property owners will grant the easements necessary to restore the closed road.

“I think all the other landowners will be very happy with the news.”