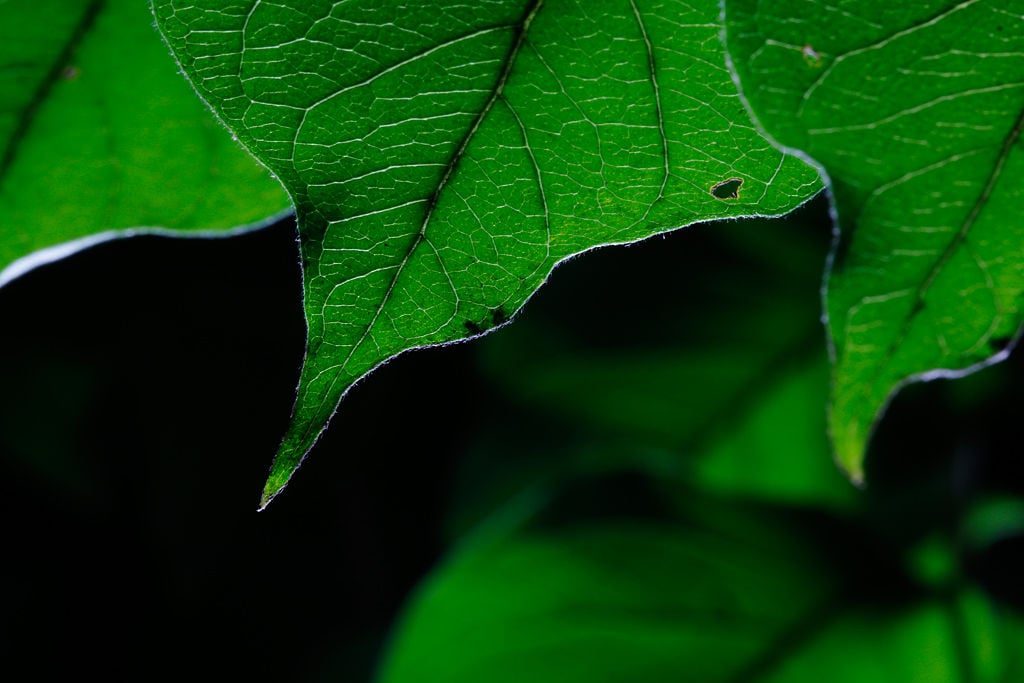 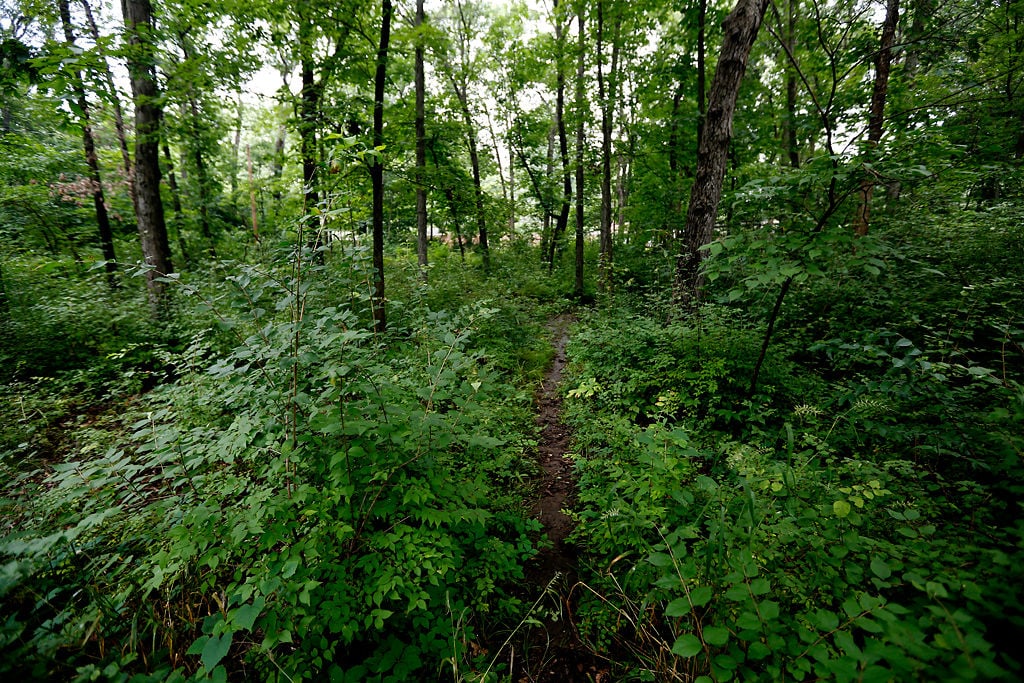 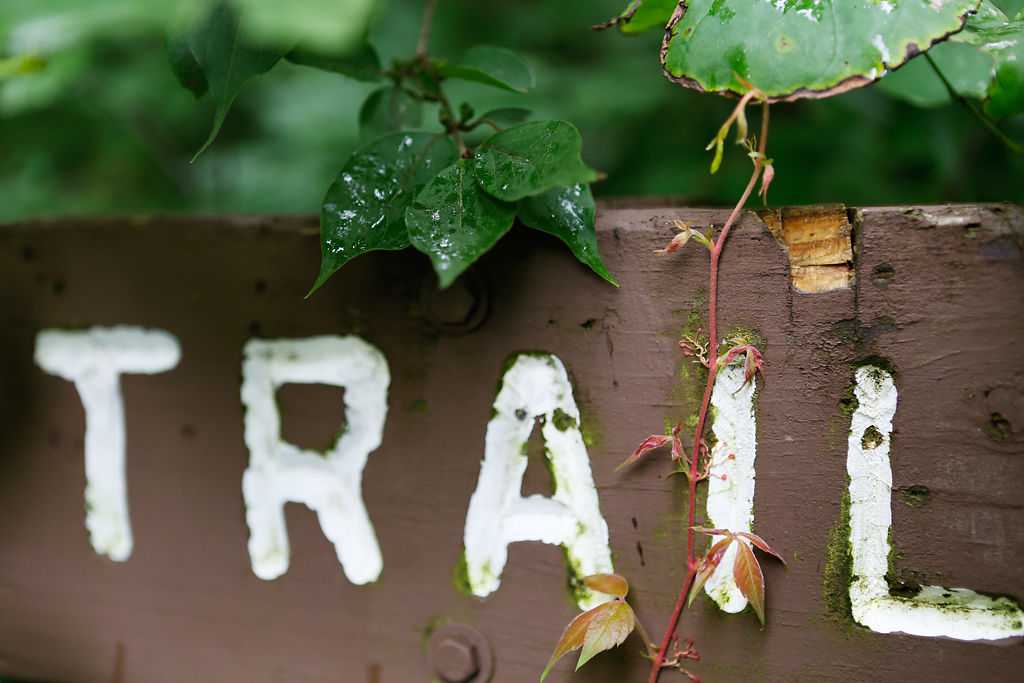 The leaves of a bush honeysuckle rest on top of a trail sign at Kiwanis Park on July 7, 2015. The bush honeysuckle is an invasive species in Missouri and competes with native plants for resources.

The leaves of a bush honeysuckle rest on top of a trail sign at Kiwanis Park on July 7, 2015. The bush honeysuckle is an invasive species in Missouri and competes with native plants for resources.

COLUMBIA — Thick, tangled and growing over 6 feet tall up fences, trees and along Columbia trails, bush honeysuckle is killing native fauna. The threat has inspired a push for the invasive species to be eradicated.

"It should be called 'devil-weed,'" Dan Burkhardt, founder of Katy Land Trust, Magnificent Missouri and StopHoneysuckle.org, said. "It's like a war. We've identified it as the enemy of the state, and that's really pretty apt."

Native to Asia, bush honeysuckle is spread primarily by more than 20 species of birds who eat the plant's red berries and drop the seeds elsewhere. Its yellow and white flowers, which grow in May and June, are rumored to be sweeter, stealing pollinators from native plants. The invasive species crowds out other native plants, growing a big, green, leafy canopy that blocks sunlight. It also emits an allelopathic chemical that kills off the surrounding vegetation.

Bush honeysuckle in Missouri was used upward of 50 years ago in landscaping as a screen between urban homes. Over the years, however, it has spread from a handful of plants to hundreds and thousands of them.

Locally, Hinkson Creek Trail and Rock Bridge Memorial State Park have experienced large amounts of bush honeysuckle growth. Efforts are being made to eradicate it at both locations. Bear Creek Trail, Rock Quarry Trail, Rock Quarry Road and Kiwanis Park are proving to be more difficult to access and control because of the plant's dense growth.

Rock Bridge has been identified as a seed source, O'Brien said. Volunteers have been working to remove as much of  the plant as possible. O'Brien described it as a sort of "sanitation" that will effectively reduce the amount of seeds in that area to shrink the population of bush honeysuckle as a whole.

Springtime is the best time to identify bush honeysuckle. There's no way to prepare for it. A green leafy canopy will start to form, towering anywhere from 6 to 20 feet above other native plants that sprout after the honeysuckle has been established, and stays until late fall. White and yellow flowers grow during May and June, with red berries growing along the leaf canopy in pairs near the fall. The best time to get rid of the rapidly reproductive plant is in October and November when most other plants have dropped their leaves, Burkhardt said.

Effectively ridding an area of  infestation requires uprooting the plant entirely or cutting it at the base and treating the roots with herbicides. Another approach is to mow the plants and till the ground.

A 25-mile stretch along the eastern edge of the Katy Trail west of St. Louis between Marthasville and McKittrick has a well-established population of the plant. A pilot project in this stretch is a first for the Katy Land Trust and Magnificent Missouri. Plants' locations were mapped definitively along that distance, Burkhardt said.

The next step is to organize teams of volunteers to go out between Oct. 15 and Nov. 15 to clear the individual plants by either uprooting them or cutting at the base and spraying chemicals on the roots.

"If you can identify where it is, you can manage it and get rid of it," Burkhardt said. "We're really trying to educate people on what they need to keep Missouri biodiverse."

Last year, the Columbia Parks and Recreation Department used about seven goats as a method of ridding bush honeysuckle from the area. The goats were owned by temporary employee Jeff Vogel and were kept in a corner of Cosmo Park by an electric fence, O'Brien said. The purely experimental project worked impressively well, and O'Brien said he hopes to use the method again in the future.

"It's got its upsides and the downsides," O'Brien said. "It's an interesting approach."

Although the goats help manage the growth of bush honeysuckle, they do not eradicate the plant entirely. Simply, the goats make it easier for volunteers to access the plant itself, cut it down and treat it so it will not grow back.

If Parks and Recreation were to use goats again, they would have to contract them and make sure someone could monitor them 24/7, O'Brien said. Additionally, the goats would have to be kept in more unpopulated areas, leaving places like the Katy Trail and Rock Quarry Road a dense and tangled mess of honeysuckle.

"It's a multi-faceted approach," O'Brien, said. "We do want community involvement. The urban ecology is our urban ecology."

Working area by area has been effective so far in efforts to get rid of the plant.

Informing communities of the bush honeysuckle risks is the priority, O'Brien said. Learning to identify the plant and take the proper steps to remove it for good helps to make bush honeysuckle's population more manageable.

Bush honeysuckle has become a nuisance in Columbia, U.S.

COLUMBIA — Scanning a dense thicket of bush honeysuckle, Bonnie Chasteen strolled along her driveway, stopped and pointed to tiny berries on t…