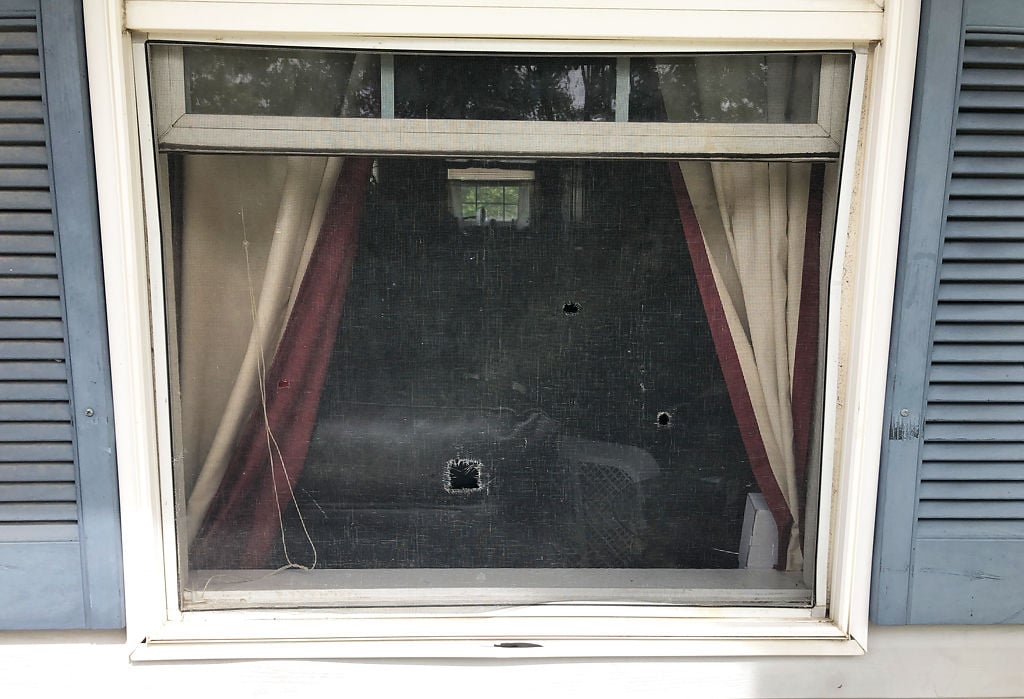 Three bullet holes can be seen Tuesday on the screen of a window of a house near Rice Road and McKee Street. Rice Road was closed after gunshots were fired in the area. 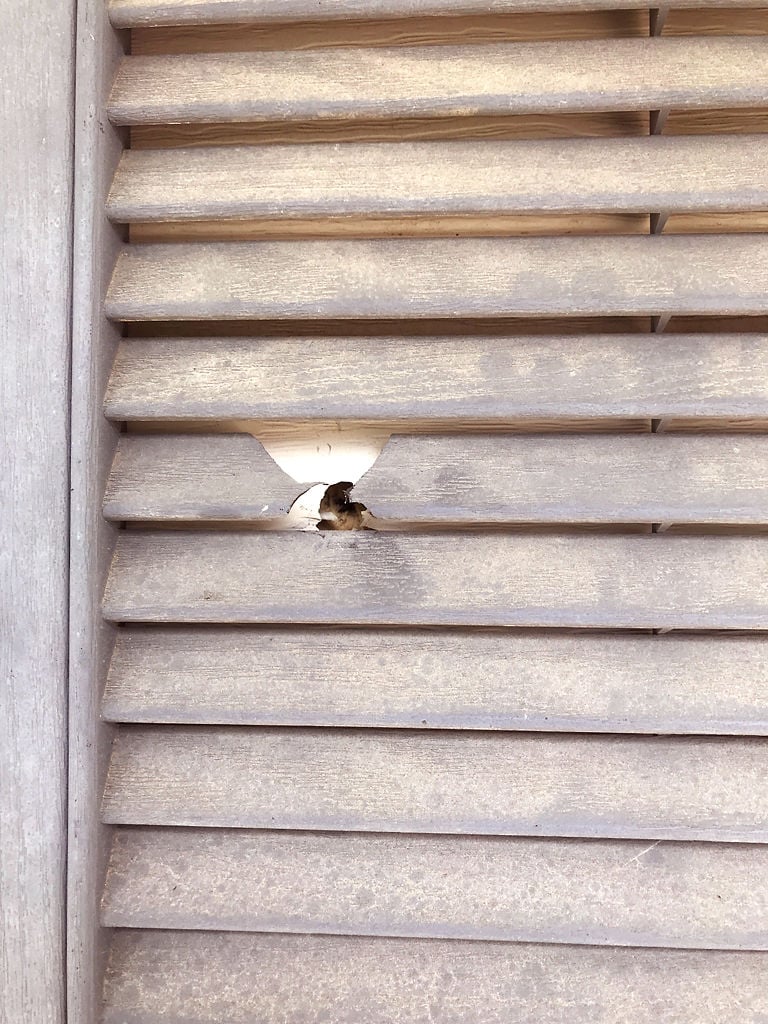 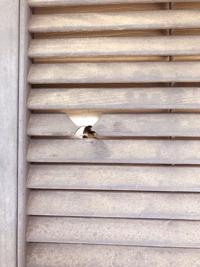 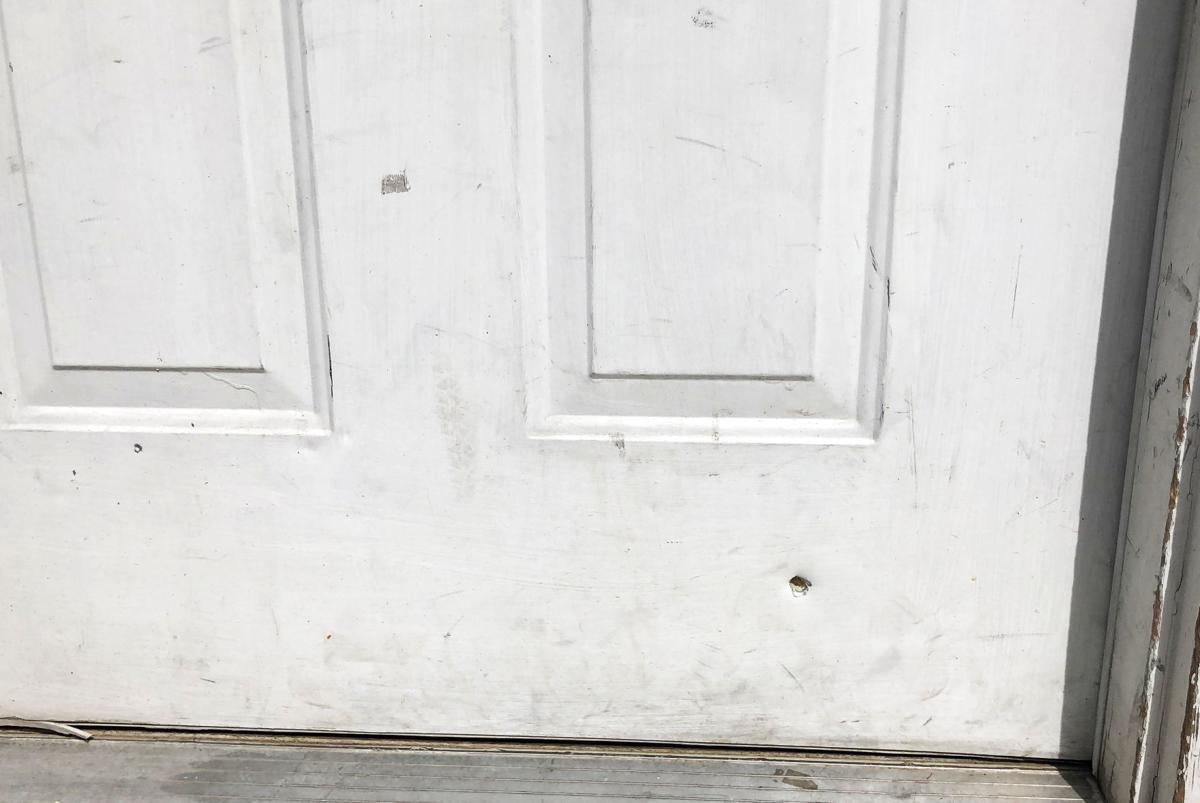 A bullet hole is seen on the front door of a house near Rice Road and McKee Street. A resident said a bullet almost hit him Monday.

Three bullet holes can be seen Tuesday on the screen of a window of a house near Rice Road and McKee Street. Rice Road was closed after gunshots were fired in the area.

A bullet hole is seen on the front door of a house near Rice Road and McKee Street. A resident said a bullet almost hit him Monday.

There’s a hole in Steve Mitchell’s front door from the bullet that almost killed him.

Around 9:30 p.m. Monday, two passing cars opened fire at the intersection in front of the house where he lives with his wife, Satina Shields, and their son, Kahree, according to residents. 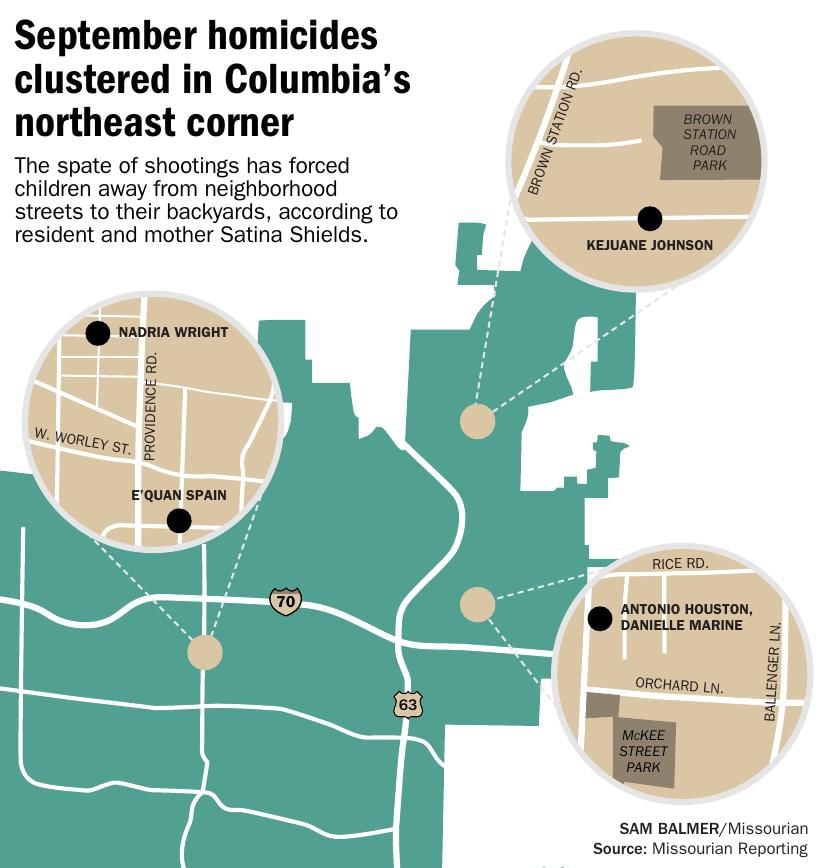 This is the reality that Columbia residents are reckoning with: a wave of gun violence that’s turning domestic scenes into life-and-death scenarios.

Five people have died in shootings this month — the same number that died in all of 2018.

It’s the highest number of homicides in Columbia in a single month since at least 2001, the earliest year for which crime data is accessible through the Missouri State Highway Patrol. 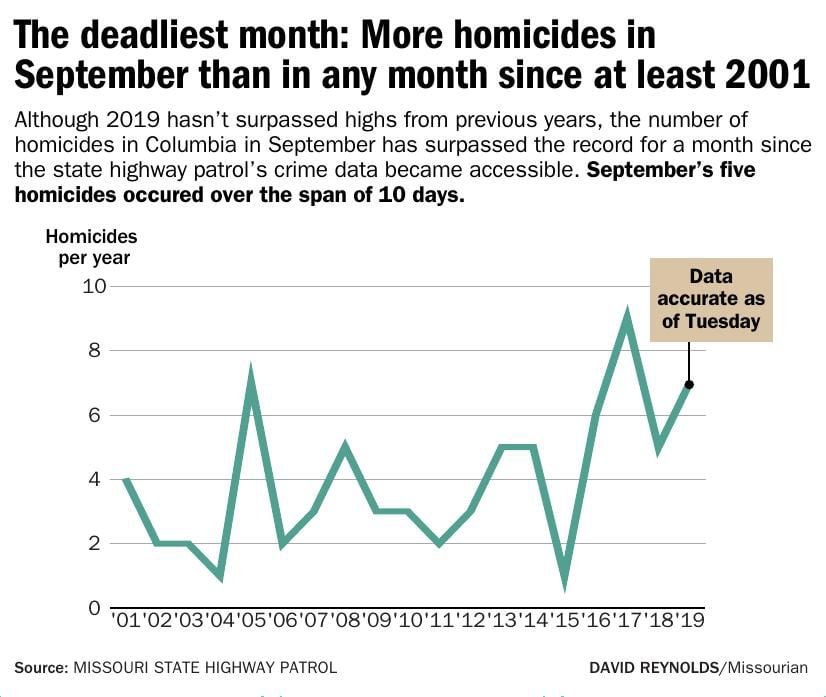 Mitchell and his cousin were walking outside to smoke a cigarette while Shields ran next door for a cup of rice. Kahree was standing in the doorway before Mitchell sent him upstairs to watch TV.

When gunfire broke out, Mitchell dropped to the floor, seeking cover. The bullet just missed his eye; had it passed an inch closer, it could have killed him, Mitchell said.

The bullet passed through the door where Kahree had been standing seconds before.

Outside, Shields hid behind a parked car and curled into a ball until the shooting stopped. They have lived in the neighborhood for a month and a half.

Two other neighbors offered similar stories Tuesday. Both had moved to the neighborhood just months earlier; their lives have been disturbed by multiple shootings they have no explanation for. They are ready to leave.

The 17 shots fired came on the heels of a double homicide that occurred at the same intersection early Sunday morning. Antonio Lasha Houston, 36, and Danielle Beverly-Mae Marine, 33, were found dead on the lawn of a home near Rice Road and McKee Street.

“I’m moving,” Shields said. The killings were “too close to home, when we watched them die over there.”

Residents are fearful for their children’s safety. The school bus stops every morning at the corner where the shooting occurred, Shields said. Many neighborhood kids play outside after school, but parents have started sending them to their backyards to keep them safe, she said.

This month’s spate of fatal gun violence began Sept. 13, just before midnight, when two people were found with gunshot wounds near Forest and Grand avenues: Sam Baldwin IV, 28, and Nadria Wright, 18, both of Columbia. Both had life-threatening injuries.

Just a few hours later, police responded to another report of shots fired near Fifth Street and Park Avenue, a half-mile away. Officers were told that E’quan Spain, 19, of Columbia had been shot and taken to a local hospital. Spain was later pronounced dead.

Columbia Police Officer Matt Gremore said Thursday at a vigil for Wright: “In my 11 years, I’ve never seen anything like this weekend. We need to come together.”

That was the plea in the police department’s response to questions Tuesday about the recent violence. In an emailed response to questions from the Missourian, city spokesman Steve Sapp said on behalf of Chief Geoff Jones that the problem is a community issue. “CPD cannot tackle this issue alone. Our community must work together to address this violence. I continually ask our community members to have the courage to speak up and help.”

Steve Sapp, spokesman for the city of Columbia, gave the following answers to questions from the Missourian. Sapp gave the answers "on behalf of" Police Chief Geoff Jones.

How the department is attacking this problem:

The Columbia Police Department has dedicated much of our resources towards identifying those who are preying on others and developing enough evidence to arrest them. But I want to be clear, this is also a community issue. CPD cannot tackle this issue alone. Our community must work together to address this violence. I continually ask our community members to have the courage to speak up and help. We can’t do it alone.

These are primarily targeted crimes, meaning both parties know or have knowledge of each other. Certainly drugs and to some extent gang affiliation are contributing causes.

It’s a cycle of crime and violence which requires something to interrupt the cycle. That may be intervention which leads those who are committing crimes down another path. Or it may be punishment of some form administered by the criminal justice system.

The impact of the recent large thefts of guns from Powderhorn and Tiger Pawn:

Certainly guns being stolen from businesses, residences and vehicles put illegal guns on the streets and often in the hands of those committing crimes. Those guns can be used in crimes or sold illegally for cash to support criminal activity.

We've long implemented crime-prevention programs and messages to encourage businesses and individuals to keep weapons in safe areas and out of plain sight in vehicles.

Again, this will take a community effort to break that cycle of violence. There are a number of local programs working to break this cycle. For example in2Action is a faith-based program that works with those being released from incarceration. They use researched and evidenced-based principles to provide life skills, job skills, etc.

Columbia/Boone County Health and Human Services works with at-risk youth in Columbia Schools through the Teen Outreach Program. This is another evidence and outcome based program shown to reduce risky behaviors teaching youth about respecting themselves, respecting others and respecting their community. Columbia Public Schools and the courts also have programs to help provide the skills and opportunities our youth need to succeed.

Police said 16 shots were fired Monday night at Rice Road and McKee Street. They said they do not believe anyone was injured.