This story was updated to reflect the correct name of the center, which is MU's Interdisciplinary Center for Food Security.

In 2016, about 1 million Missourians were food insecure. In the past three years, that number has dropped to 865,000, or approximately 15% of the population.

These numbers were reported in the Hunger Atlas produced by MU's Interdisciplinary Center for Food Security. This year’s atlas is the fifth since the first edition in 2008.

The atlas uses data from Feeding America and the U.S. Department of Agriculture to create its tables for each county.

Food security is defined by the U.S. Department of Agriculture as access by all people at all times to enough food for an active, healthy life.

The atlas measures the amount of Missouri’s population that experiences food insecurity. Then, it assesses how each county in the state addresses the needs of those who fall into the food insecure category.

A county’s level of need and its performance, or how well it addresses those needs, are rated from “very high” to “very low.”

Performance is assessed by participation in programs that exist to help those who are food insecure, as well as the number of people eligible to participate. 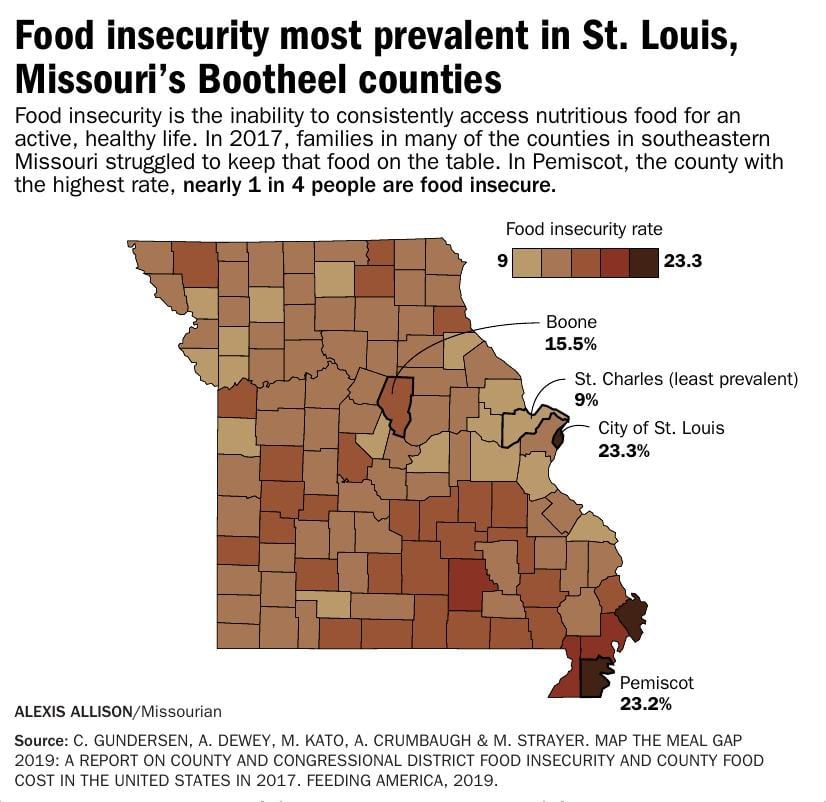 Sandy Rikoon, dean of the College of Human Environmental Sciences and co-director of the Interdisciplinary Center for Food Security, explained in an email that drops in participation in Boone County’s financial aid programs, such as free and reduced-price lunch and food stamps, caused the county’s very low performance rating.

“At the same time, if the state average for participation rises, and Boone County’s rate fell, then in comparison to other counties the relative performance is even lower,” Rikoon said.

The senator asked for an update on the food bank's programs and helped load boxes destined for veterans.

‘It truly can be any one of us’: Missourians are food insecure all over the state

In Missouri, the struggle to keep healthy food on the table day in and day out is hidden, often an invisible experience.