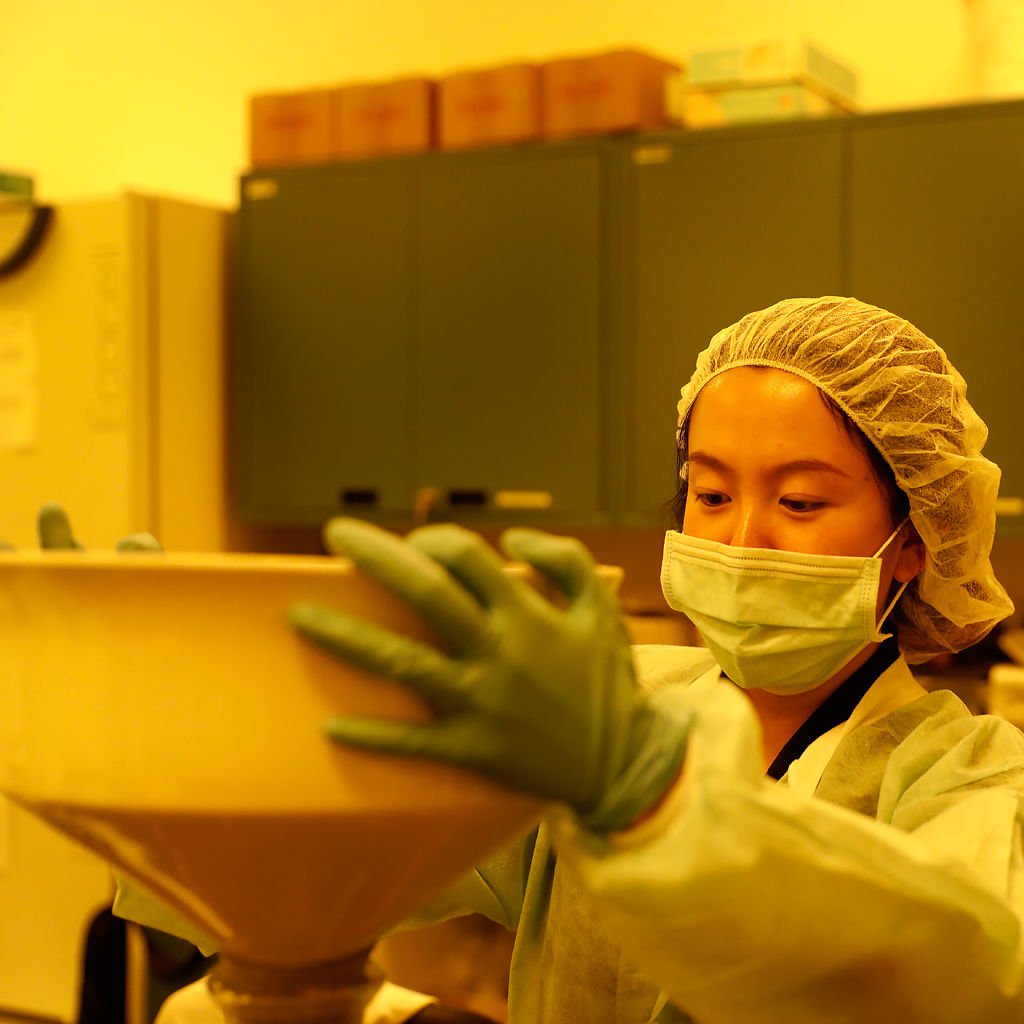 Mengqi Ji filters fiber out of a chemical solution using a flask and a powered pump in the Nanova manufacturing building on May 9. The materials must be manufactured under filtered orange light to keep them from hardening. 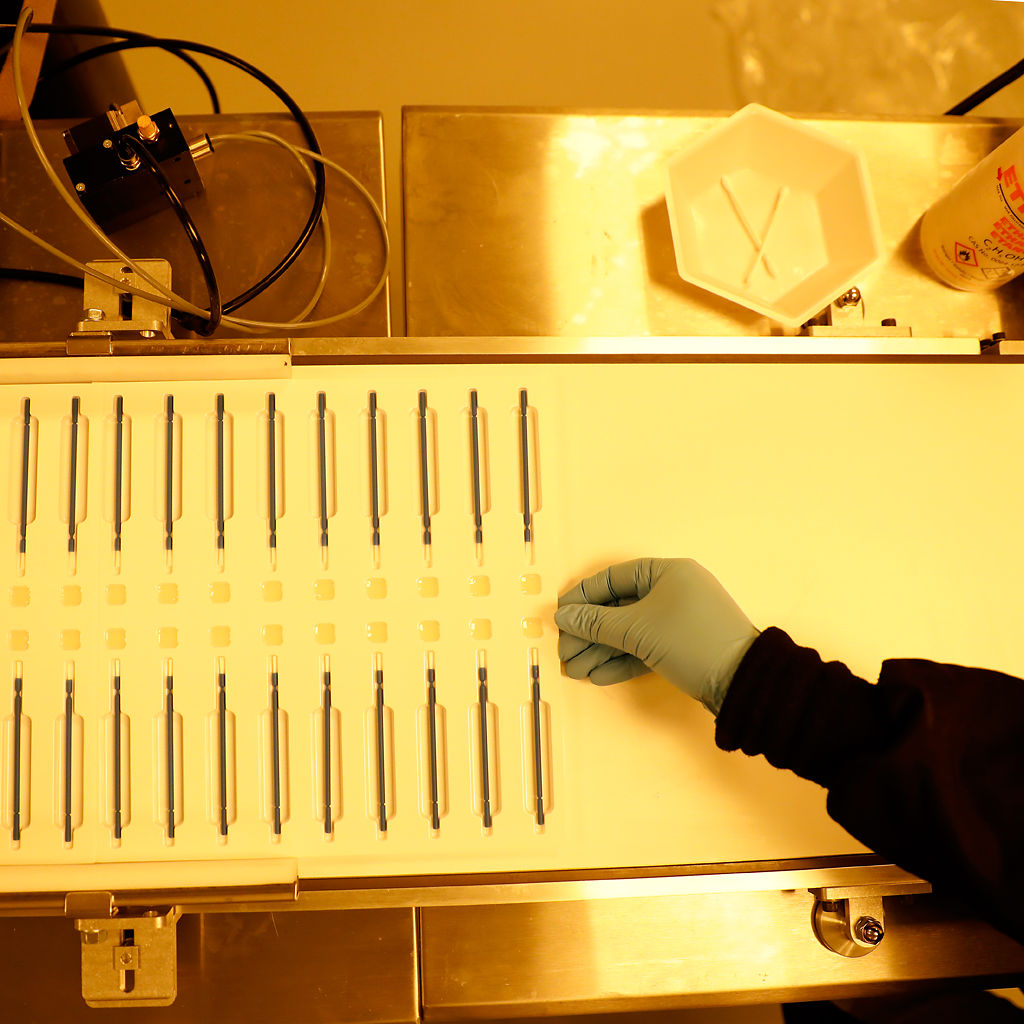 Josephine Gibson picks up a tray of brushes and dental composite for packaging in the Nanova manufacturing building. The packages are shipped to dentists and used as protective enamel on patients' teeth. 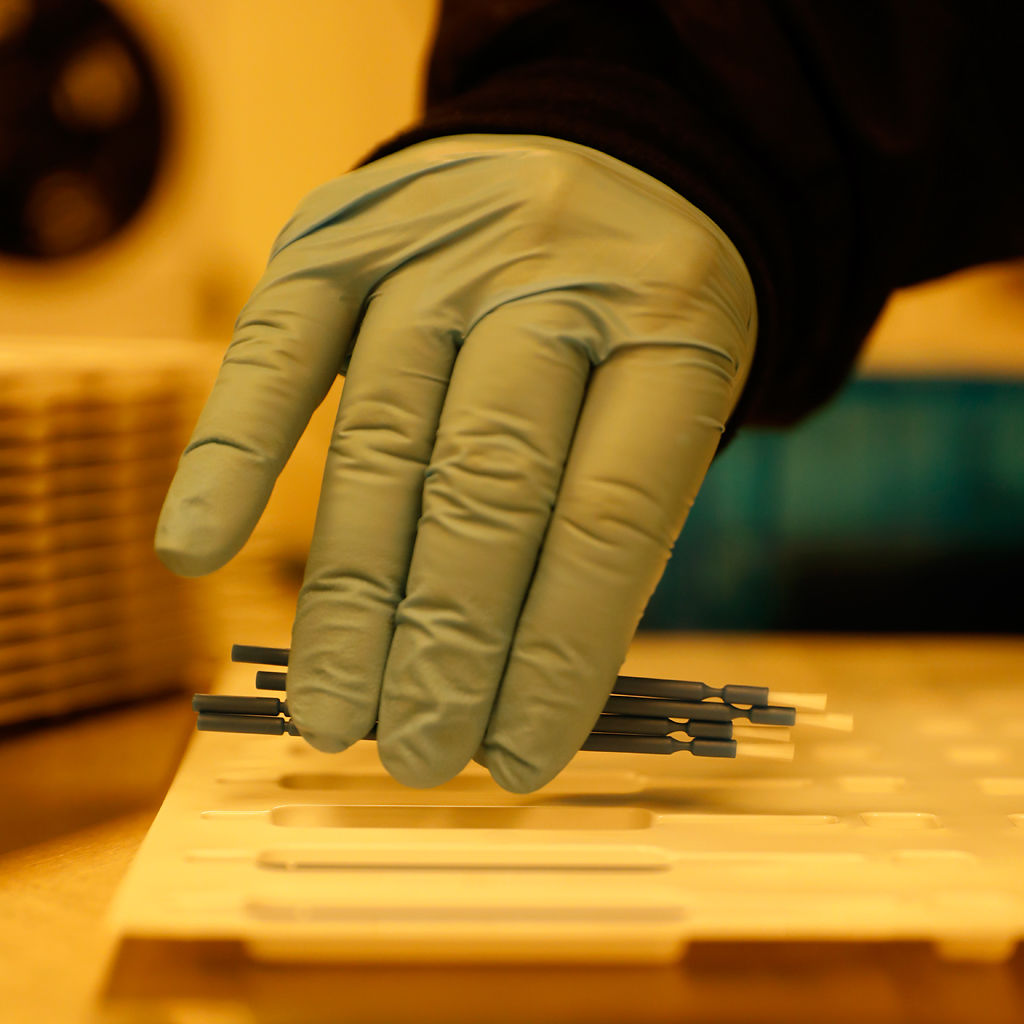 Tiffany Hughes places dental brushes in a tray in the Nanova manufacturing building. After loading the brushes, Hughes put each tray into a machine that injects a single-use serving of dental composite alongside each brush. 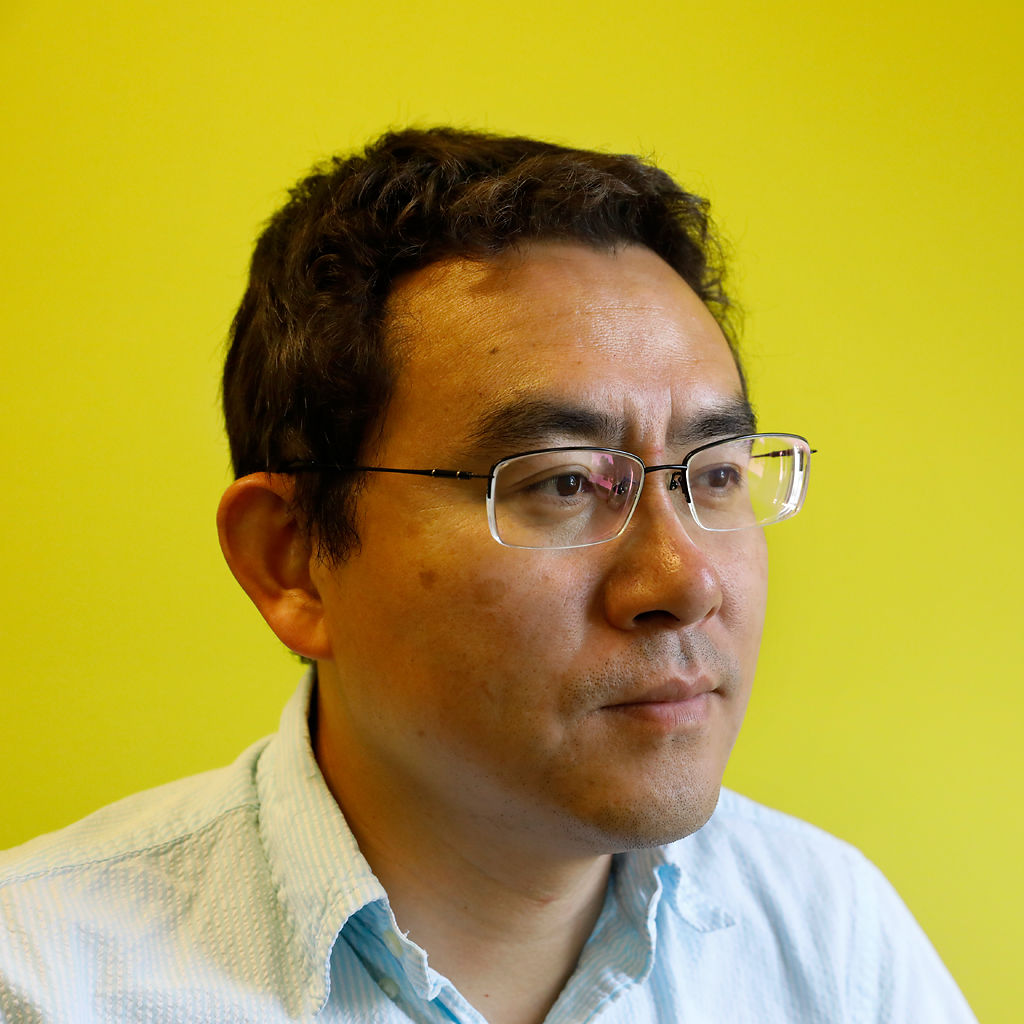 Hao Li is the CEO of Nanova Biomaterials. Li, a Chinese immigrant, built the business from the ground up.

Mengqi Ji filters fiber out of a chemical solution using a flask and a powered pump in the Nanova manufacturing building on May 9. The materials must be manufactured under filtered orange light to keep them from hardening.

Josephine Gibson picks up a tray of brushes and dental composite for packaging in the Nanova manufacturing building. The packages are shipped to dentists and used as protective enamel on patients' teeth.

Tiffany Hughes places dental brushes in a tray in the Nanova manufacturing building. After loading the brushes, Hughes put each tray into a machine that injects a single-use serving of dental composite alongside each brush.

COLUMBIA  — Sitting in his company's 6,000-square-foot facility in an industrial part of northeast Columbia, Hao Li, the chief executive officer of Nanova Biomaterials, recounted his journey to becoming an entrepreneur. Li, who grew up in China, said he always knew he wanted to start a business and make products to help people. But he had no idea that would bring him to mid-Missouri.

When Li moved to the United States in 1999 to enroll in a doctoral program in New Jersey, he was seeking the vast opportunities in science and technology that the U.S. offered.

Almost two decades later, Li is an engineering professor at MU and the co-founder of Nanova, which applies nanotechnology research to the manufacturing and distribution of dental and medical products.

However, for high-skilled foreign entrepreneurs like Li, the process surrounding visas and green cards is not always straightforward. Currently, the U.S. has only limited visas for immigrants looking to start businesses, and those usually require immigrants to make substantial capital investment or have past experience running companies.

The lack of visa options means foreign entrepreneurs often do not have a clear path to start their businesses in the U.S., according to Matthew La Corte of the Niskanen Center, a libertarian public policy think tank in Washington.

Previously, the Obama administration issued the International Entrepreneur Rule, which would allow foreign entrepreneurs whose companies meet minimum investment requirements to apply for “parole status.” That status would give the immigrants up to five years to start and grow a business in the country. The rule is set to take effect in July.

But the rule has come under scrutiny from the Trump administration, which has pledged to ensure that parole programs cannot be used to circumvent immigration law, according to a January draft order obtained by Bloomberg News.

From school to startup

Li is one of about 14,000 foreign-born entrepreneurs in Missouri, who own businesses that generate $258.2 million in income across the state, according to a report by New American Economy, a national coalition of business leaders and mayors advocating for comprehensive immigration reform.

Founded in 2007, Nanova now employs nearly 60 people, according to Li.

Although Li said the process of starting a business in this country was not too hard for him, he is aware of how difficult it can be for many others. “I was one of the lucky ones,” he said.

Li charted a path that many international students in the U.S. aspire to follow: study or pursue research at a university, then build a business based on their education and interests.

More than a million foreign students enrolled in U.S. institutions in 2015-16, according to the Institute of International Education.

According to the National Foundation for American Policy, an organization that researches trade and immigration, 44 of the 87 U.S. startups valued at $1 billion or more as of 2016 had at least one immigrant founder, and a quarter of them had a founder who first came to America as an international student. Some of the entrepreneurs who first entered the country as international students include Elon Musk, founder of SpaceX and co-founder of Tesla, and brothers John and Patrick Collison of Stripe Inc., an internet payments company valued at nearly $9 billion.

One international student who has seen his entrepreneurial dream deferred is Oluwatosin Oluwadare, a graduate student from Nigeria studying computer science. Oluwadare first came to the U.S. to study computer science in 2013, and he entered the Ph.D. program at MU in 2015.

As part of a personal project, he created an app called EyeCYou, which gives people who are visually impaired an audio description of people they meet, ideally making users more socially aware and independent.

But for Oluwadare, who is on an F1 student visa, the process of expanding his product into a company has been a difficult one, he said, because of his visa status. International students such as Oluwadare are, in general, not allowed to run businesses in the U.S., except under restricted conditions for one year immediately after they graduate. Currently, Oluwadare has not established a company around his app or made any revenue from it.

"I'm waiting for a dependable partner with a green card or citizenship to be the primary partner in the business before expanding," Oluwadare said.

He also said attracting investment has been a problem because of his student visa.

"Investors are wary of investing when you (say) you can't work full-time on the company," he said, pointing to regulations that prevent international students from dropping out of school to pursue entrepreneurship.

Twelve countries, including Canada, New Zealand, Italy, Korea, Germany and Singapore, use startup visas to encourage entrepreneurs to create jobs in their countries, according to La Corte from the Niskanen Center, but the U.S. lacks such a program. According to a 2013 report from the Ewing Marion Kauffman Foundation, a Kansas City foundation focused on entrepreneurship and education, a startup visa would create between 500,000 and 1.6 million new jobs in the U.S. over the span of 10 years.

A bipartisan Startup Act introduced in the U.S. Senate in 2015 would have allowed non-citizens already in the country to apply for a startup visa, provided they employ at least two non-family workers on a full-time basis and raise at least $100,000 in startup capital. Estimates by the Kauffman Foundation suggest that such a visa would add 1.6 percent to the U.S. gross domestic product.

For Oluwadare, though, prospects of contributing to the GDP as a startup founder are uncertain. Unless he finds a legal route to growing his company in the U.S., he said he would finish his Ph.D., gain some work experience and head back to Nigeria.

"An education from the U.S. and work experience would boost my resume a lot," he said. "But I still wish my company was not limited from expanding due to my status as an international student."

The executive order from President Trump and political rhetoric have contributed to a drop in international interest in U.S. universities, students and administrators say.