Under Missouri’s new sex offender registration law, certain offenders may petition the court to be removed from the list and the lifetime restrictions that prohibit them from living and being near places where children congregate.

One of the registrants who might benefit is related to the legislator who championed the changes.

Under the old law, Missouri was much more punitive than most states, treating all offenders as harshly as many states would treat only their highest-risk predators. Missouri was one of 17 states requiring all sex offenders to register for life, regardless of the severity of the crime, according to the Restoration of Rights Project.

The new law ended the state’s 24-year one-size-fits-all approach by introducing a system of three tiers that reflect the severity of the crimes, from least egregious, Tier I, to most, Tier III. The new rules, contained in Senate Bill 655, were championed by former Rep. Kurt Bahr, R-St. Charles. Bahr’s half-brother is now classified as a Tier I offender and will, in time and under certain conditions, be eligible to have his status as a sex offender removed.

Since August, local police departments across the state have classified 93 percent of offenders (14,973 of 16,134), according to Missouri State Highway Patrol Communications Officer Capt. John Hotz.

The new law also eases the quarterly requirement to check in with law enforcement, allowing Tier I offenders to report in person once a year and Tier II offenders every six months. Tier III offenders must still check in every 90 days.

A Missourian review of the sex offender registry on the highway patrol’s website found that at least 693 offenders on tiers I and II have been on the registry long enough that they may petition for removal now. Twenty-seven of them live in Boone County, but only one has petitioned for removal since the law took effect in late August. Assistant Prosecuting Attorney Merilee Crockett, who handles all sex offender registration cases for the county, said the first petition came in Tuesday. 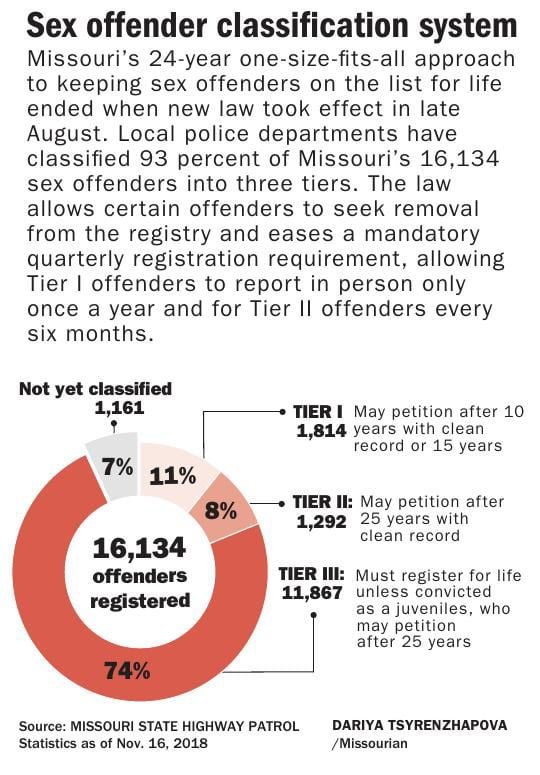 The story behind the law

Bahr told the Missourian in August that his keen interest in the matter was driven by sympathy for a constituent he knew personally. That constituent, he said, had committed “a relatively minor offense” but was destined to remain on the list for life.

A reader, upset about Bahr’s comments, wrote the newspaper alleging he was motivated to change the law because his half-brother is a registered sex offender.

An analysis of public records shows his half-brother, Kaleb McClaskey, lived near Bahr’s district but not in it. Bahr maintained otherwise.

“But my brother was at one point of time my constituent, if you need to know,” he said. “I’m well aware everything I’ve done was legal.”

McClaskey, 26, pleaded guilty in 2015 to first-degree invasion of privacy for secretly filming a naked teen relative coming out of the shower and changing in front of a mirror. The St. Charles man stood outside the house and recorded the 15-year-old victim through a basement window of her bedroom. She discovered McClaskey when she spotted his white phone case in the window. Several days later, she filed a police report. Upon investigating McClaskey’s iCloud account, police found several similar videos of the victim recorded over five months.

He was convicted of a Class D felony and sentenced to five days of shock detention in the St. Charles jail, followed by a five-year supervised probation to expire in 2020, court records show. McClaskey has now been classified as a Tier I offender.

His case is among the least common on the registry: Only 12 offenders convicted in Missouri for invasion of privacy are on the list, according to an analysis of the registry and records on Case.net. And only six of those offenders, including McClaskey, were convicted of a felony.

There’s a victim behind each offense on the registry. In nine out of 10 cases, the victim was not a stranger. McClaskey’s victim was an extended family member living under the same roof at the time of the incident.

It’s the Missourian’s policy to not identify victims of sexual assault unless they wish to be named. In this case, Hannah McNiff agreed to come forward.

Now 19, McNiff was a sophomore in high school at the time McClaskey was caught and prosecuted. It was difficult for her to cope with the crime.

“It’s something that I will remember vividly,” she said. “It got under my skin.”

The last time she saw McClaskey was almost three years ago, in court when he pleaded guilty in front of the judge. She’s had no interaction since.

McNiff, McClaskey and Bahr all live in and around St. Charles, a St. Louis suburb with a population of about 70,000. After eight years in the legislature, Bahr is prominent and well-known. Term limits ended his tenure as a representative this summer. This month he was elected director of elections for St. Charles County.

McNiff said she was shocked and surprised when the rewritten registration law passed.

“It’s a substantial change,” she said. “I guess I didn’t realize how big of a change it would make” until it passed.

Unaware of Bahr’s work on the law, McNiff assumed her offender would spend the rest of his life on the list, reporting his whereabouts to law enforcement every 90 days.

Even when McNiff’s mother showed her a news article about Bahr’s bill, she still hoped it would fall through.

In 2017, the bill died early. This year, it passed the House, but the Senate was not picking it up for a vote. As the legislative clock ticked, Bahr’s chance to change the law was coming to an end.

At the last minute, he parsed his lengthy bill into separate amendments and added them to Sen. Scott Sifton’s (D-South St. Louis County) Senate Bill 655, which increased Missouri’s minimum marriage age to 16.

The new law’s loosening of restrictions significantly departs from the persistent tightening of state sex offender laws that had been enacted in the past decade.

McNiff said she thinks Bahr’s personal motives for passing the law were selfish.

“He has been pushing for it ever since his brother has been a part of the list,” she said. “I understand that this law is helping several people more than it’s just helping his brother, but he pushed for it because of his brother.”

Bahr’s comments about McClaskey’s offense being “relatively minor” hit McNiff hard. Memories she had kept inside emerged and motivated her to speak out.

“It hurt me inside because I know that the pain did not feel minor to me,” she said, crying. “Although I was never physically hurt, I was very mentally hurt. I was not the same person for over a year.”

In the meantime, McClaskey is finishing his third year on the registry. If he continues to maintain a clean record, he may petition for removal in seven years. He did not respond to requests for comments for this story.

McNiff acknowledged having mixed emotions about the lifetime punishment her offender would face if he never left the registry. Her personal relationship with him is conflicted by the fact that he’s the father of her nephew. McNiff’s elder sister was married to McClaskey, but they divorced over the incident.

“Personally, I would prefer him on the list for life,” McNiff said. “Even though he was a first-time offender and that was the only time he’s offended anybody, it was still extremely offensive. And it still hurts me really badly.

“But he has a child,” she added. “I just don’t want this incident to jeopardize his relationship with his son,” if he is ever able to establish a relationship. “I want him to be able to pick him up from school one day.”