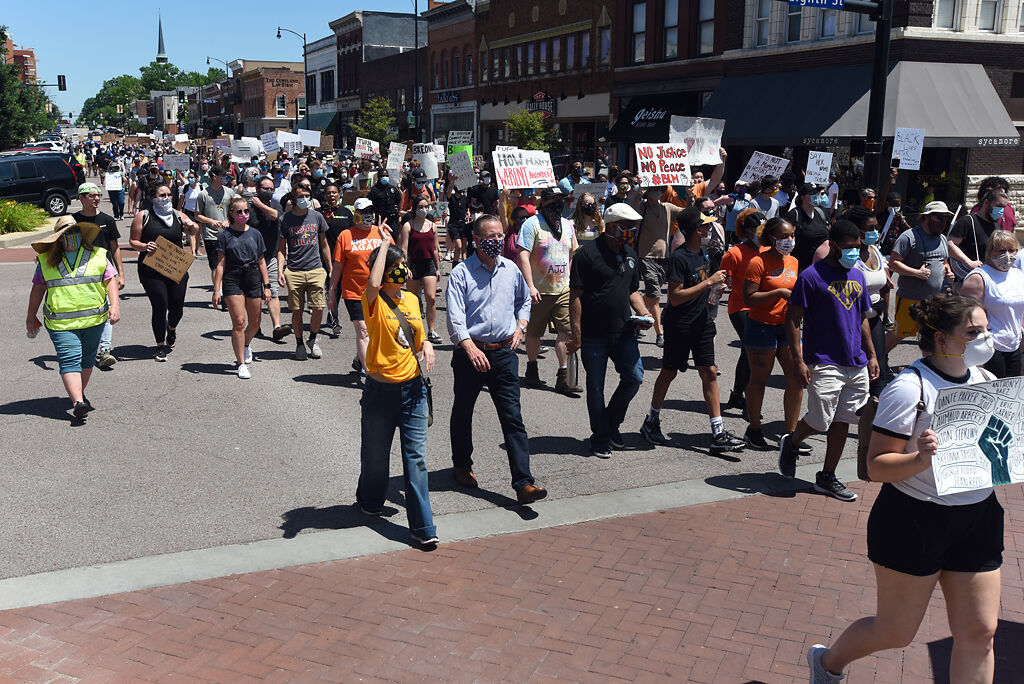 Protesters march down Broadway during the NAACP rally on Saturday. 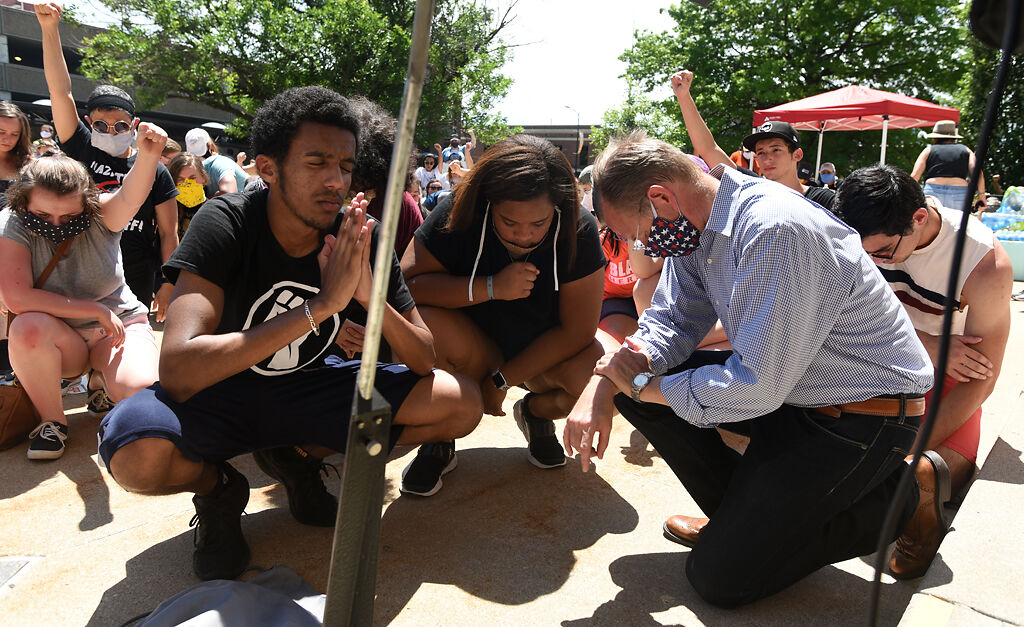 Mayor Brian Treece kneels with protesters during the NAACP rally Saturday at the Boone County Courthouse. 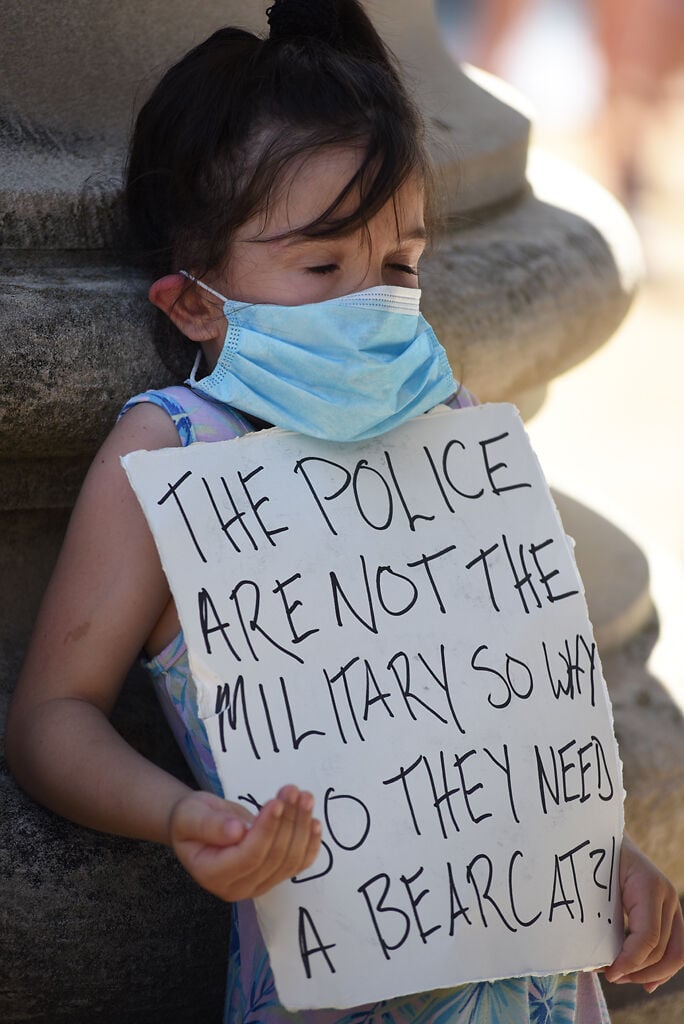 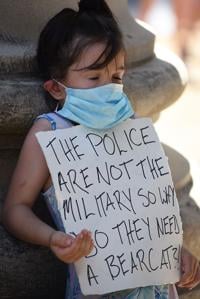 A young girl closes her eyes in rest during the NAACP rally Saturday. 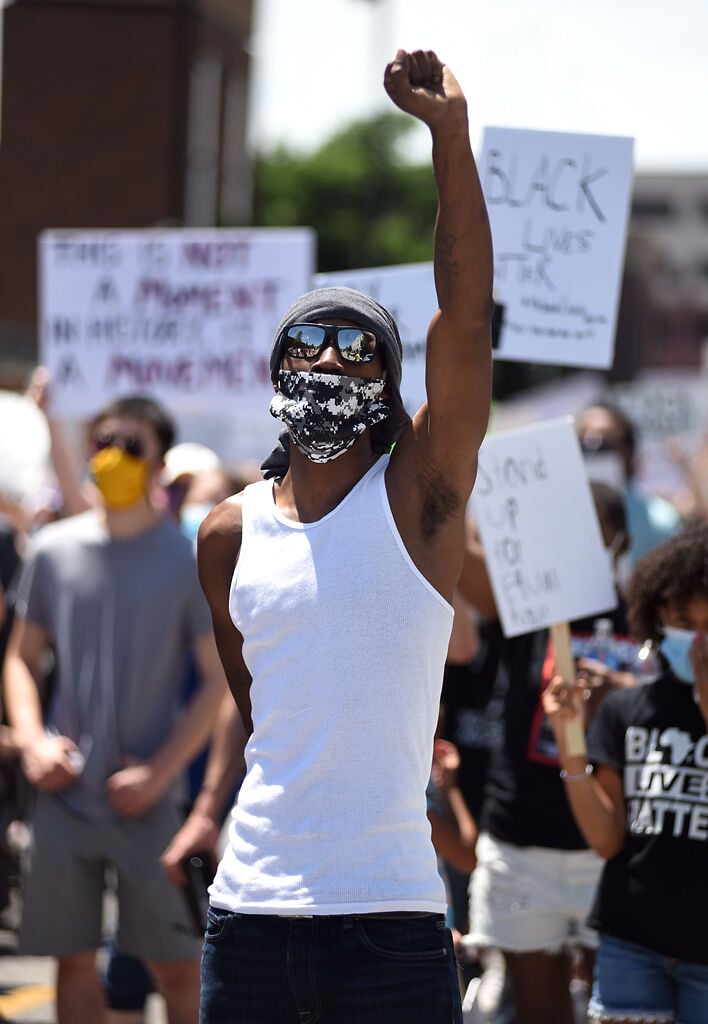 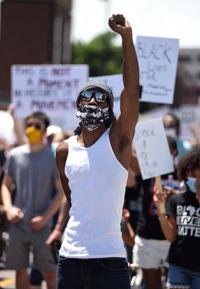 Dominicque Ellis raises a fist in protest during the NAACP rally Saturday in downtown Columbia. 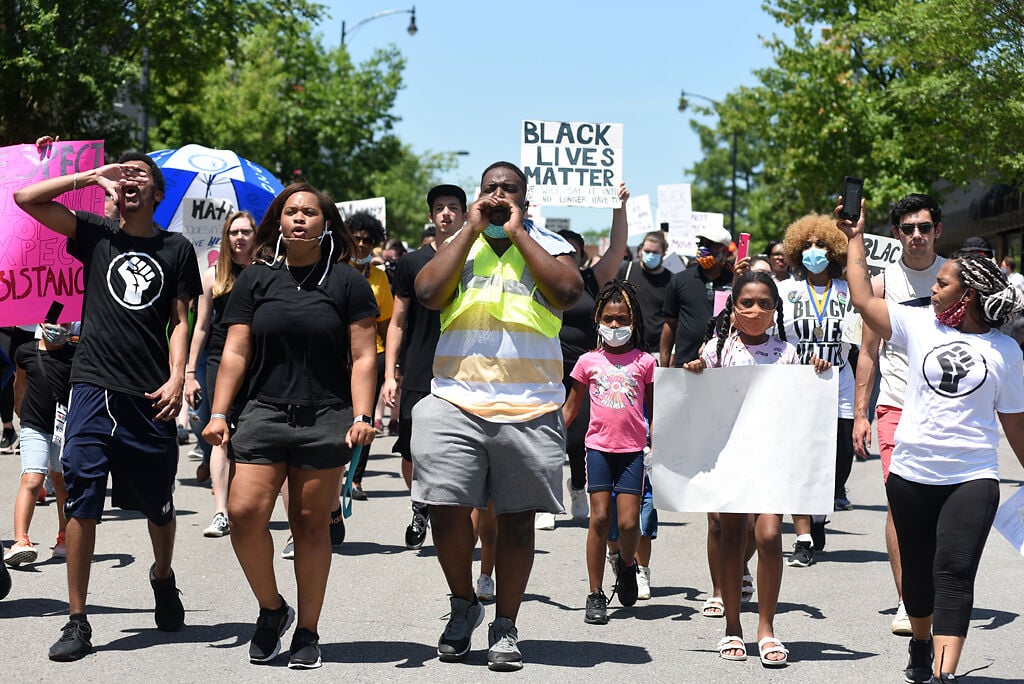 Protesters chant rally cries while marching down Broadway on Saturday in downtown Columbia.

Protesters chant rally cries while marching down Broadway in Downtown Columbia on Saturday.

Protesters march down Broadway during the NAACP rally on Saturday.

Mayor Brian Treece kneels with protesters during the NAACP rally Saturday at the Boone County Courthouse.

A young girl closes her eyes in rest during the NAACP rally Saturday.

Dominicque Ellis raises a fist in protest during the NAACP rally Saturday in downtown Columbia.

Protesters chant rally cries while marching down Broadway on Saturday in downtown Columbia.

Protesters chant rally cries while marching down Broadway in Downtown Columbia on Saturday.

Protests continued for a sixth straight day Saturday in Columbia with a rally against systematic racism in America, joining a nationwide effort spurred by the death of George Floyd, who died under police restraint in Minneapolis last Monday.

“This is not just a moment in history,” said Mary Ratliff, the president of the NAACP’s Columbia chapter and the event’s presiding speaker. “This is a movement.”

The rally, organized by the Columbia NAACP and Mid-Missouri Peaceworks, drew a crowd of hundreds and featured a number of speakers including several preachers, an MU law professor, a lawyer, Mayor Brian Treece and newly-elected First Ward City Councilperson Pat Fowler.

David Tyson Smith, a Columbia lawyer who established the Citizens Police Review Board, which reviews instances of excessive use of force by law enforcement in Columbia, was one of those speakers.

“The problems that are in Minnesota, they are here,” he said.

Smith pointed out new data recently released by the state Attorney General’s office that shows black drivers in Columbia and Boone County continue to be stopped by law enforcement at a rate far higher than white drivers.

He also spoke about the pushback some protests across the country have seen.

“Don’t let anyone make you feel bad about protesting,” he said. “This country was built on protests.”

He brought up examples like the Boston Tea Party where people used protest to enact social change.

“Yet when people turn on the TV, they are angry about your protests,” Smith said. “The status quo in America is never going to be happy when you protest.”

He said that he did not advocate for violence, but he said “that doesn’t mean you got to be passive.”

One of the preachers was the Rev. Marcus Richardson, who spoke about how black people don’t want special treatment, they just want an end to racial disparities.

“Get your knee off our neck,” he said in a rousing speech.

Another one of the preachers, the Rev. J.P. Patterson, talked about the ridiculous ways in which racism is talked about.

“We have Sesame Street characters telling our young people about racism,” he said.

Also speaking at the ceremony was Fowler, the newly-elected councilperson, who told people that if they want to see change, they need to vote.

“Are you tired of the horrifying messages, images of tear gas and prison guards about mobilizing the U.S. military on our own soil to stop your peaceful protests?” she asked the crowd. “Then vote. Can’t take another day of the mischaracterization of facts by this president, his cabinet, his press secretary about the virus of COVID and the virus of racism? Vote!”

At the rally, a booth was set up to register people to vote.

“It is our responsibility to break down the systems of institutional racism to undo damaging laws and stereotypes and learned behaviors,” Treece said.

Because of this, Treece said, he asked the city manager, the city attorney and the police chief to review their use of force policies to make sure that the events that happened in Minneapolis and elsewhere do not happen in Columbia.

He also commended the dedication of the protesters.

After the speeches, the protesters marched around downtown before returning to the courthouse where they took part in an 8-minute and 46-second moment of silence while kneeling and raising their fists, to honor the almost nine minutes a Minneapolis police officer had his knee on the neck of George Floyd.

Demarco Winston, one of the protesters who organized similar rallies earlier this week, talked about how he wanted the protests to remain peaceful.

“We don’t show hate, we only show love,” he told other protesters.

Another protester present, Raven Nichols, called the event very moving, particularly the speech by Smith. She was happy that protesters have remained peaceful and hopes the fact that people registered to vote will help promote change.

“A change has got to come,” Ratliff said as she closed the ceremony.

"This is a wonderful turnout," organizer Markiez Smith said. "We got major support out here, and I love it."