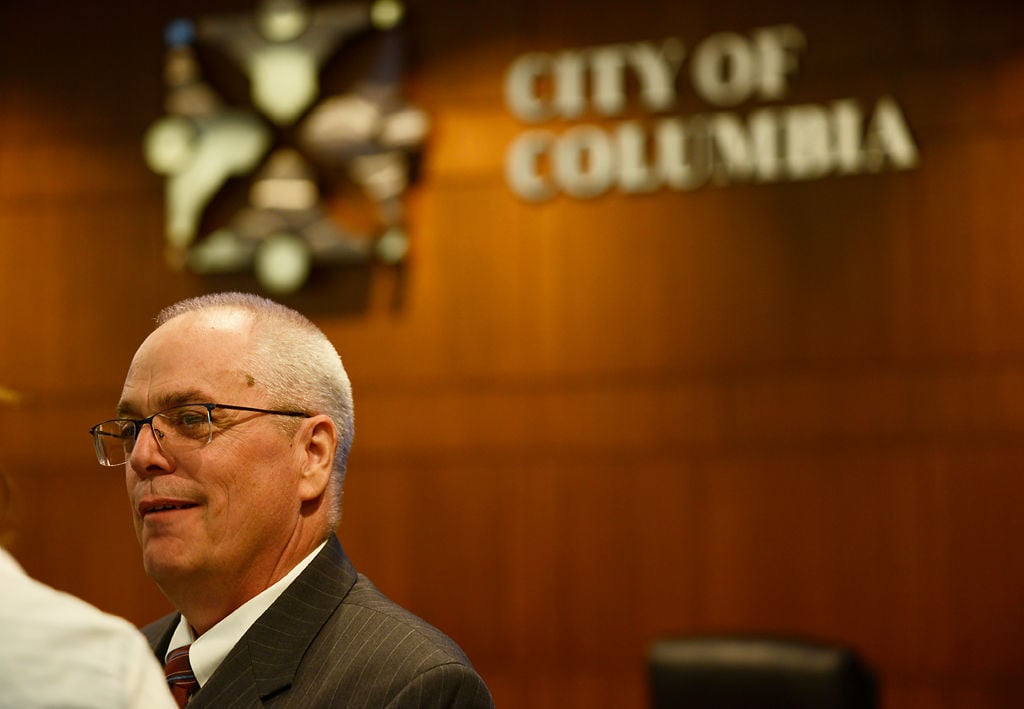 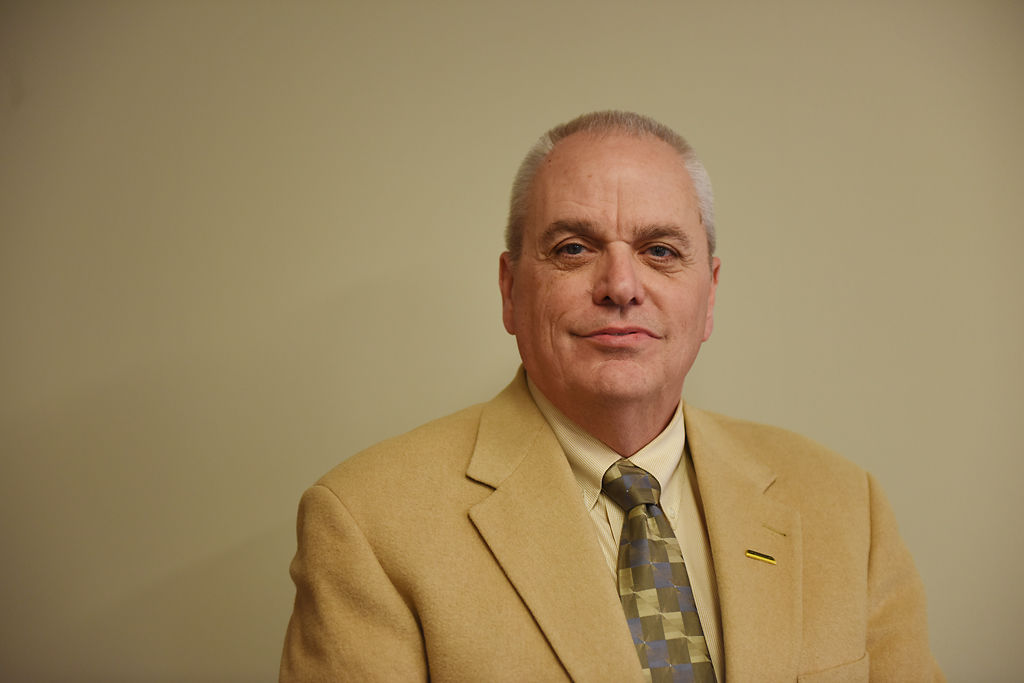 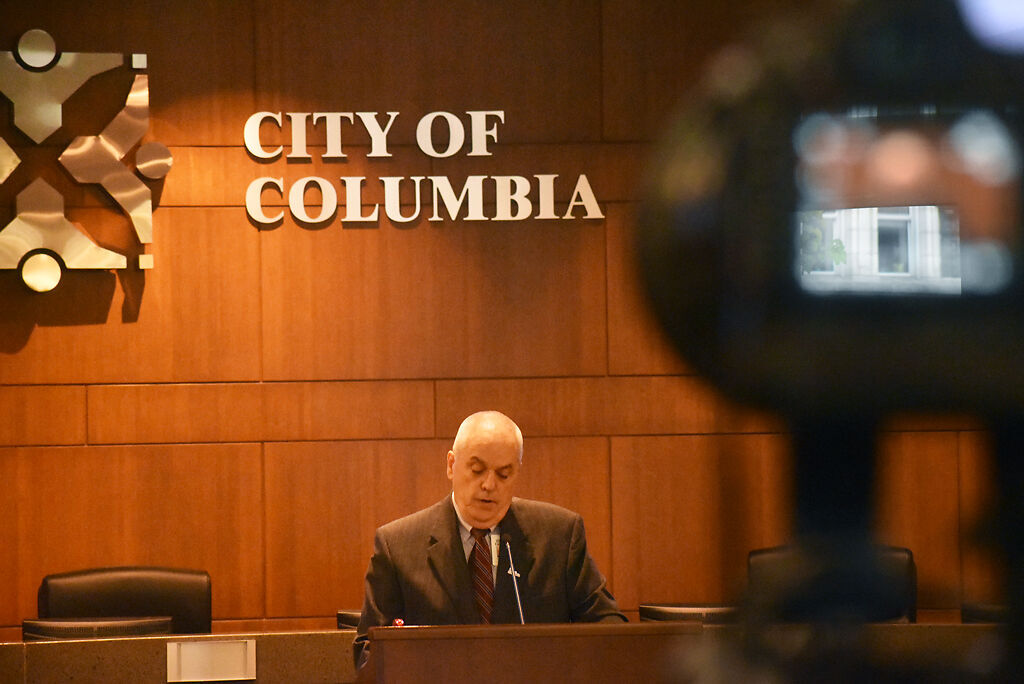 About 30 people gathered in the Columbia City Council chambers to hear City Manager John Glascock deliver his State of the City address May 25 in downtown Columbia.

About 30 people gathered in the Columbia City Council chambers to hear City Manager John Glascock deliver his State of the City address May 25 in downtown Columbia.

This story was updated at 4:05 p.m. to include more comments from Mayor Brian Treece and remarks from Second Ward Councilwoman Andrea Waner.

“To the Council, thank you for putting your trust in me and allowing me to have greater input into the direction of the city government. To all of my staff, it has been an honor to work with you and represent the City,” Glascock said in a news release. “And to the residents, thank you for allowing me to be a part of a great community that wants the best for everyone. Together, we have accomplished many great things and I am very proud of those accomplishments.”

Glascock started his career at the Missouri Department of Transportation as an operations engineer. He worked for MoDOT for 19 years before becoming the chief engineer for the Columbia Public Works Department in 2003. In two years’ time, he became the director of Public Works, and he served in that position for a decade.

Glascock initially said he had no plans to make a bid for the official city manager position. He cited his pending retirement, potential opposition from the community and a concern that he would not be able to align with the City Council’s goals as reasons for his reluctance.

After several months as interim city manager, Glascock changed his tune. He placed his bid for city manager and got the job over fellow finalist Jim Palenick, the city administrator for Racine, Wisconsin. The council appointed Glascock unanimously in July 2019, a decision that was met with positive support from the community.

As city manager, Glascock steered Columbia through the COVID-19 pandemic. He signed the City Council’s state of emergency resolution and worked with the Columbia/Boone County Public Health and Human Services Department to establish pandemic-related restrictions and orders.

Glascock officially rescinded the state of emergency May 29.

The last task of Glascock’s long career will be working with the City Council to finish the city budget for fiscal year 2022.

“I wish I could talk him out of it,” Treece said. “I am so grateful for his leadership not just during the pandemic but his entire portfolio with city government, culminating with his final job as city manager.”

Treece said Glascock first mentioned retiring to the council in December but believes he wanted to pull the city through the pandemic and leave the city on good financial footing.

Glascock and Treece did not always agree on issues when Glascock was the Public Works director.

“When I became mayor, I think when I asked him to sit in as interim city manager we began to see his true leadership skills,” the mayor said, adding that Glascock was key to leading the city through the COVID-19 crisis.

“Nobody knew two to three years ago that when we hired him we would have a historic pandemic, and his quick decision making and his leadership during this crisis has been exemplary,” Treece said. “But it’s not just during those challenges but when times were good as well. We challenged him as a City Council to diversify his cabinet, and he’s done that. We challenged him as incoming city manager to have two-deep leadership in each department, so if a director had to retire, there was someone ready to step in.”

Fifth Ward Councilman Matt Pitzer said he hates to see Glascock retire but is grateful for his 18 years of service to the city.

“He was the right city manager at the right time when we hired him, with his steady leadership proving invaluable throughout the pandemic,” Pitzer said. “He has helped restore confidence and trust in our government, and our community is better off because of him.”

Second Ward Councilwoman Andrea Waner said she met Glascock when she was working in the Health Department several years ago.

“He was a good leader who had the best interests of his staff in mind, and he took that leadership quality to the city manager’s office,” Waner said. “I appreciate his steadfast hand during COVID, and I’m glad that he gets a chance to retire and be with his family and relax a little bit.”

Waner said the city has “really competent and smart people” running its various departments who will be able to help Glascock’s successor.

“I’m grateful for the opportunity to be a part of the process and how we shift our perspective and hire somebody with a vision for the future of Columbia,” she said.

“He made sure the city was in good shape before he gave us notice, and giving us an additional seven months to look for his replacement is going to serve taxpayers and the citizens of our community pretty well.”

Treece said the council already has had preliminary talks about the search for Glascock’s replacement.

“We expect to finalize that plan maybe as early as the next City Council meeting and start that citizen engagement process.”

Treece said there will be a nationwide search, and the news release said the city will get help from a consultant. The hope is to hire someone this summer.