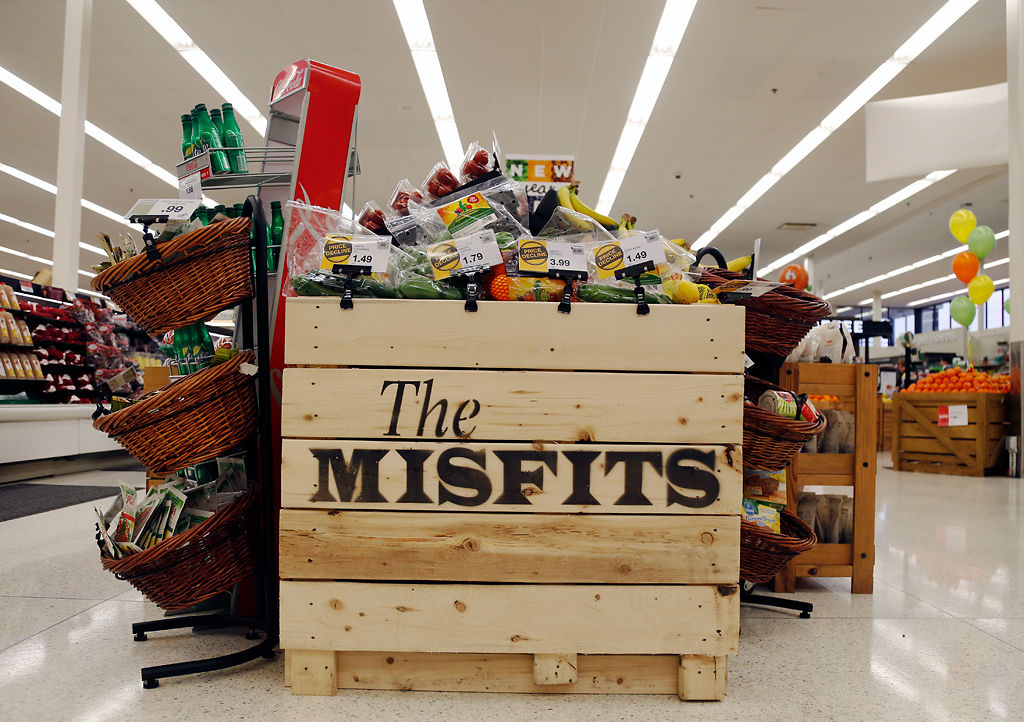 Discounted produce is displayed Thursday at the West Broadway Hy-Vee in Columbia. The grocery store is selling a small selection of produce that normally would be thrown away because of its appearance. 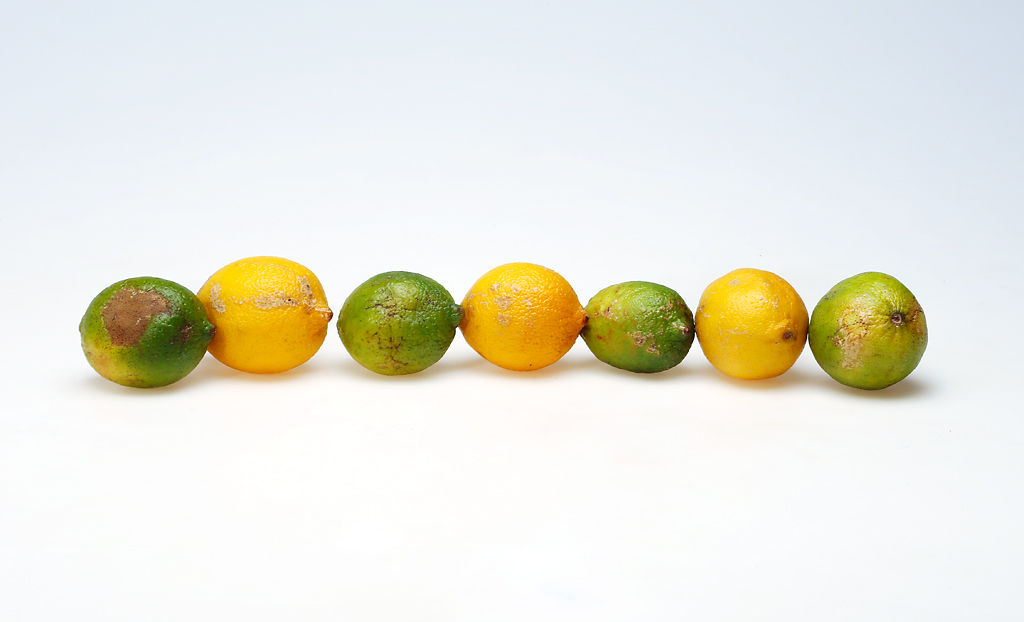 Lemons and limes that are too small and bruised to be sold at full price with the rest of the produce are sold by Hy-Vee as part of the Misfits produce line. 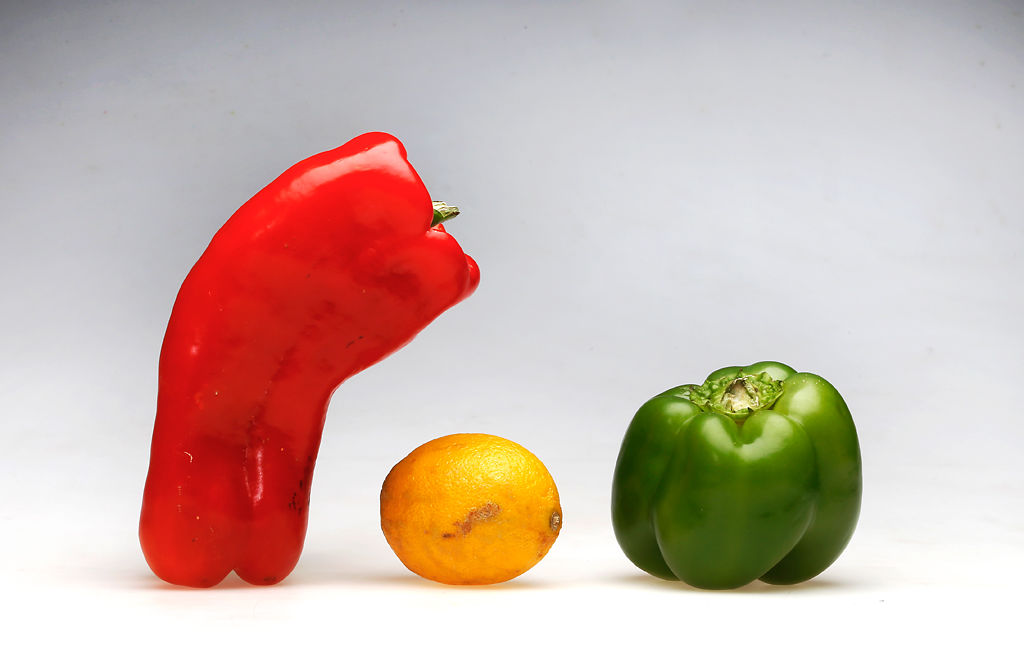 A misfit red bell pepper, a lemon and a green bell pepper come from a special selection of discounted produce that typically wouldn't be sold at Hy-Vee.

Discounted produce is displayed Thursday at the West Broadway Hy-Vee in Columbia. The grocery store is selling a small selection of produce that normally would be thrown away because of its appearance.

Lemons and limes that are too small and bruised to be sold at full price with the rest of the produce are sold by Hy-Vee as part of the Misfits produce line.

A misfit red bell pepper, a lemon and a green bell pepper come from a special selection of discounted produce that typically wouldn't be sold at Hy-Vee.

COLUMBIA — The produce in your local grocery store has a body image problem. Perfectly plump pears and arrow-straight carrots are setting unrealistic standards of beauty for the cockeyed potatoes, scruffy grapefruit and lopsided apples.

Farmers usually throw away the cosmetically challenged produce for not meeting industry size standards. The U.N. estimates that 20 to 40 percent of produce is thrown away for this reason alone, and the Department of Agriculture has set a goal to cut food waste in half by 2030.

Thanks to a recent movement to reduce food waste, "ugly" produce is getting a place in the starting lineup. Hy-Vee Inc. has partnered with produce company Robinson Fresh to launch Misfits, a product line of cosmetically challenged produce in its stores at average prices 30 percent lower than their more perfect counterparts.

Hy-Vee launched the product line in its Des Moines, Iowa, stores in October . During fall and into early winter, more stores across Hy-Vee’s eight-state region joined. By the beginning of the new year, nearly all 242 stores had Misfits produce in stock.

Hy-Vee is not the only large grocery store chain that has begun selling produce with a few bumps and bruises in the name of reducing food waste. In July , Walmart began selling imperfect Washington state apples under the “I’m Perfect” label in about 300 Florida stores, according to a Walmart Today blog post.

Startups like Imperfect Produce and Hungry Harvest are sourcing "ugly" produce from farms and delivering it to doorsteps around the country at a reduced cost. Hungry Harvest delivers only in Baltimore, Washington, D.C.,  and Philadelphia while Imperfect Produce limits deliveries to the San Francisco Bay area. Both groups have waiting lists on their websites for people wanting to buy the produce.

In the eye of the beholder

Since Hy-Vee launched Misfits, participating stores have been receiving four to six types of produce depending on what is seasonally available. Common produce items include peppers, cucumbers, lemons and limes. Although the produce may have a few cosmetic defects, it's just as safe and nutritious as its conventionally attractive counterparts.

Potthoff said customer response to the fruits and vegetables has been positive.

That could be partly because it doesn’t look much different.

"Sometimes it looks as good or better than what I have on the regular shelf, it just might be a little smaller. If I were to put it on a regular shelf with the rest of the stuff, the customer's not even going to notice," he said.

Elston said he would expect the people who gravitate toward Misfits produce to be more environmentally conscious and more concerned about reducing their carbon footprint and food waste.

But it could just be that customers are starting to care less about how their produce looks.

Clover's doesn't sell a special category of "ugly" produce. But it does sell only organic produce, which can sometimes be smaller and more irregular. The store has a discount area for the fruits and vegetables that are more blemished compared to the other organic produce. Pyatt emphasized that consumers learn appearance isn't the whole story when they take a risk and try foods they would normally skip over.

"It's buying a bruised apple and realizing that it's not terrible. Sometimes you'll buy a piece of fruit that is perfect, it looks perfect and it's terrible. You get home and it's just awful, so it's learning, it's trying," she said. "I think you learn by trial and error and I think a lot of that for us starts with the discount section for produce because you're getting something that you're not so sure about. You get home and it's delicious because it's actually kind of overripe and that's good for most fruits."

She also said that customers should consider how they'll use the fruits and veggies they purchase, especially if they plan on cooking them.

"If you're going to peel it and chop it up and cook it, why does it have to be beautiful? It's not going to look anything like that when you go home and cook it," she said.

Local farmers markets seem to be helping consumers get a better sense of where their food comes from and its natural imperfections, Pyatt said.

"You walk into a grocery store and everything seems so perfect. That's the idea behind supermarkets. Everything is in a row and in order and perfect, whereas when you go to a farmers market, you see the humanity of it," Pyatt said. "You see the mud on the farmers' pants. And maybe the sweet potatoes still have dirt on them. It becomes more real."

Potatoes are Greg Sellmeyer's specialty at the Columbia winter farmers market, where he sells dozens of varieties. The potatoes are dusted with dirt. Some are curved like boomerangs.

He sells varieties unique to Sellmeyer Farms and gives them names, once even trying to name one after his wife, Tammy, who wasn't flattered.

"There's basically two varieties you find at the supermarket. They're bred for shape, they're all the same size, uniform," Sellmeyer said. "You can see from our sweet potatoes they're every size and they're crooked and they're not pretty, but ours have a different taste than the ones in the stores do."

He said his customers aren't freaked out by the differences in his potatoes. In fact, he said, they're "tickled to death" that he offers so many varieties and are even willing to pay a little more for it.

Libby Gwynn, who has shopped at the farmers market for three years, said she doesn't look for perfection when shopping for produce.

"I probably tend to avoid things that look perfect because I imagine that they've been sprayed or otherwise modified instead of being able to just grow the way they should," she said.

Sellmeyer said that even though grocery stores are starting to sell "ugly" produce, he believes that the farmers market has the best variety and selection.

It could be a while before consumers get over their fixation with perfectly formed produce, but Pyatt said that families can shop more frequently and plan meals more consciously to stop produce from rotting in the fridge before someone can eat it. She also said that cooking together is another way for families and friends to show appreciation for food.

"I think it's important to share food too," she said. "If you realize that you bought way too many apples, invite a friend over to help you make apple pie."

How local grocers are taking a bite out of food waste

COLUMBIA — When produce passes its prime, it's often destined to spend the rest of its days rotting in a plastic garbage bag.

"When it gets thrown in a plastic bag and put in the landfill, it just sits there. It doesn't become anything," said Nikki Pyatt, the produce manager at Clover's Natural Market. "Anything organic that grows out of the ground can go back into the ground."

One-fifth of the United States' trash is food, according to the Environmental Protection Agency. Here's what your grocers are doing to waste less.

Clover's Natural Market on East Broadway has a section of blemished organic produce available at discounted prices. Pyatt said there was no difference in flavor compared to full-price produce. She said this section is great for families on a budget seeking to buy organic food.

In addition to food waste, Clover's seeks to limit general trash. Pyatt said the store has one bag of trash and a compost bin for any food scraps.

Employees are often sent home with unsellable or expired items. The store also donates leftovers to charities, like Food Not Bombs.

"Food waste, just like any other waste, needs to be lessened in order to protect what we know to be nature, to be earth, to be good for everybody," Pyatt said.

Lucky's Market doesn't sell "ugly" produce, but it does try to reduce food waste by culling the produce section for "distressed" produce. Store director Andy Weis said that the store donates everything still safe for consumption to local food banks. (Weis said it’s not just produce getting donated. Any items deemed unsellable at the end of the day go to food banks as well.)

The store also composts any fruits and vegetables that don't make the cut and leftover juicing scraps, like lemon peels and pulp.

In addition to its Misfits program, at least 220 of 242 Hy-Vee stores compost nationwide. Those stores kept 17.8 million pounds of food waste out of landfills in fiscal year 2016.

Schnucks gives away edible, unsellable produce to food pantries, said Paul Simon, a spokesman for the grocer. Each location partners with area food pantries and sends out a truck of donations daily.

Simon said produce makes up a large portion of donations, but it's not just fruit. The store also donates meat through Operation Food Search. The group ensures that food safety standards are upheld during the process.

Stores in the St. Louis area also compost through St. Louis Composting. The Columbia location does not compost.

Despite weather growing colder, Columbians have access to fresh produce 50 weeks a year, thanks to the Columbia Farmers' Market. Low-income families also have increased access to fresh and nutritious foods, thanks to a Sustainable Farms & Communities program.