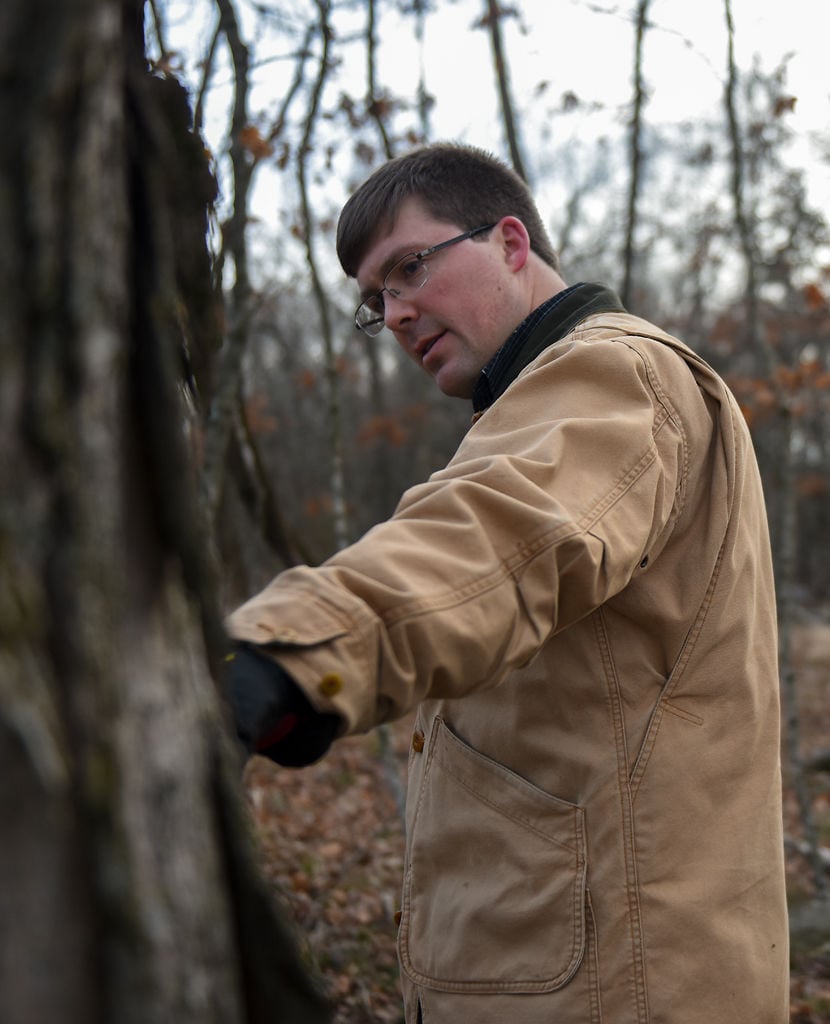 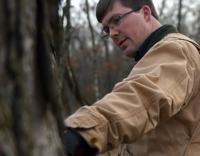 Benjamin Knapp points out holes from past tappings Thursday. Once a tree reaches 8 inches in diameter, it can be tapped for sap. 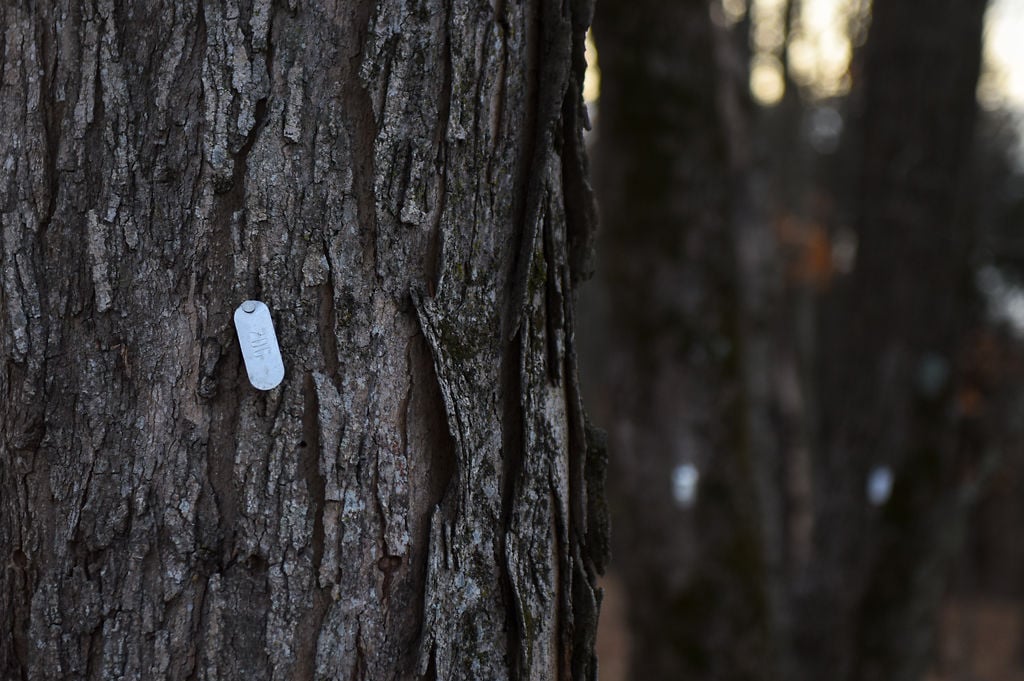 A tree tag glints in the setting sun on a maple tree Thursday in the MU Sugar Bush. There are many maple trees scattered across the Baskett Wildlife Research and Education Center, but the sugar bush has the highest concentration of maple trees, which makes tapping more efficient. 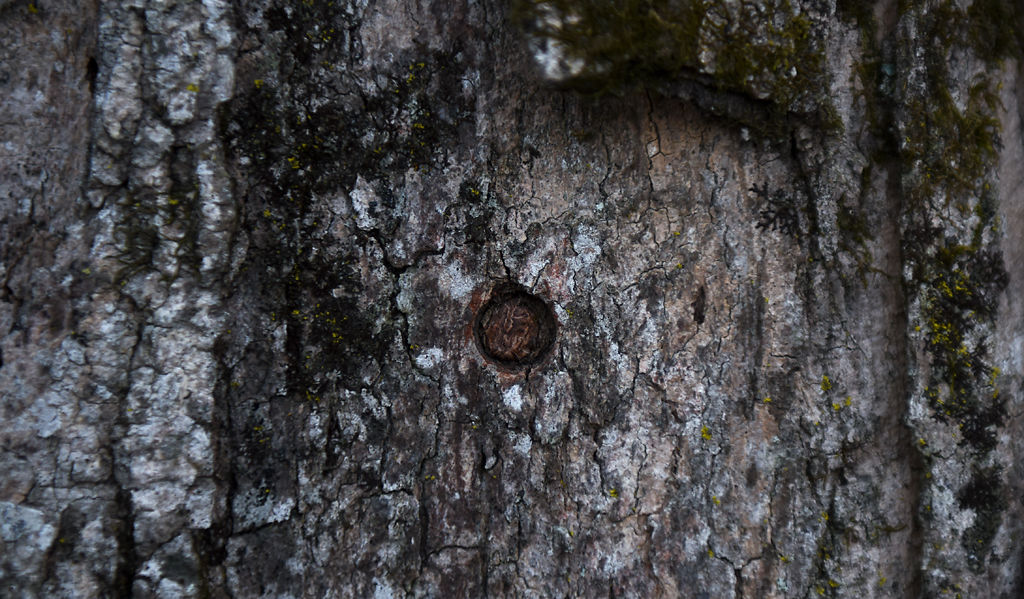 A hole is leftover from previous years of tapping Thursday in the MU Sugar Bush. Maple trees can be tapped each year, with the previous year’s hole being sealed over by the growth of the tree. 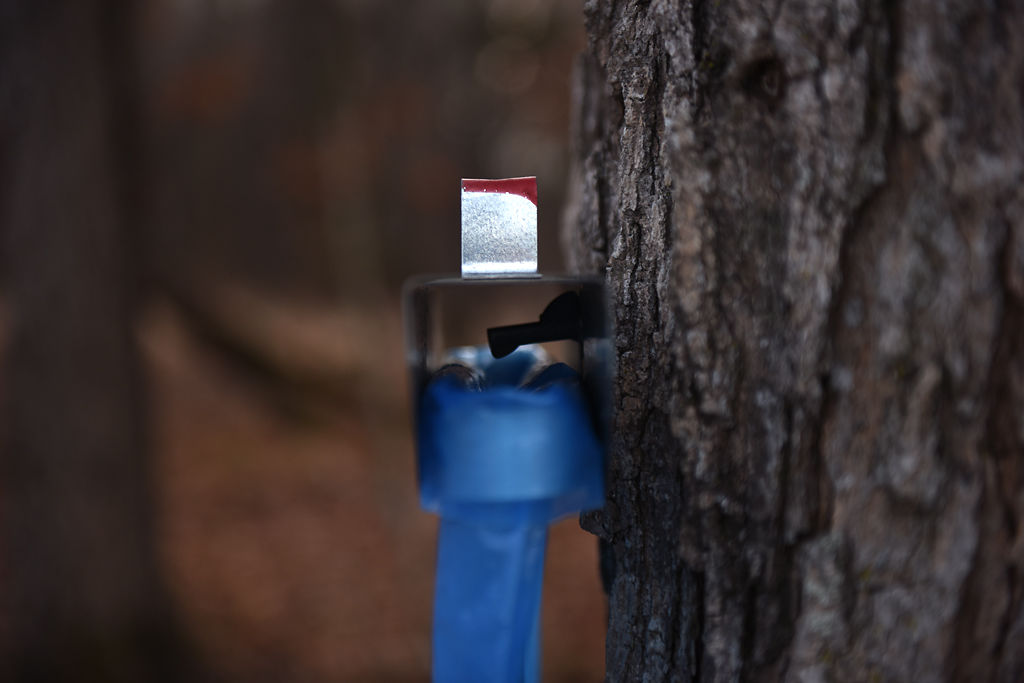 A 4-gallon bag hangs from a spigot tapped into a maple tree Thursday in the MU Sugar Bush. Sap is collected in 4-gallon bags or 5-gallon buckets, and it takes one tree a full day to fill it. 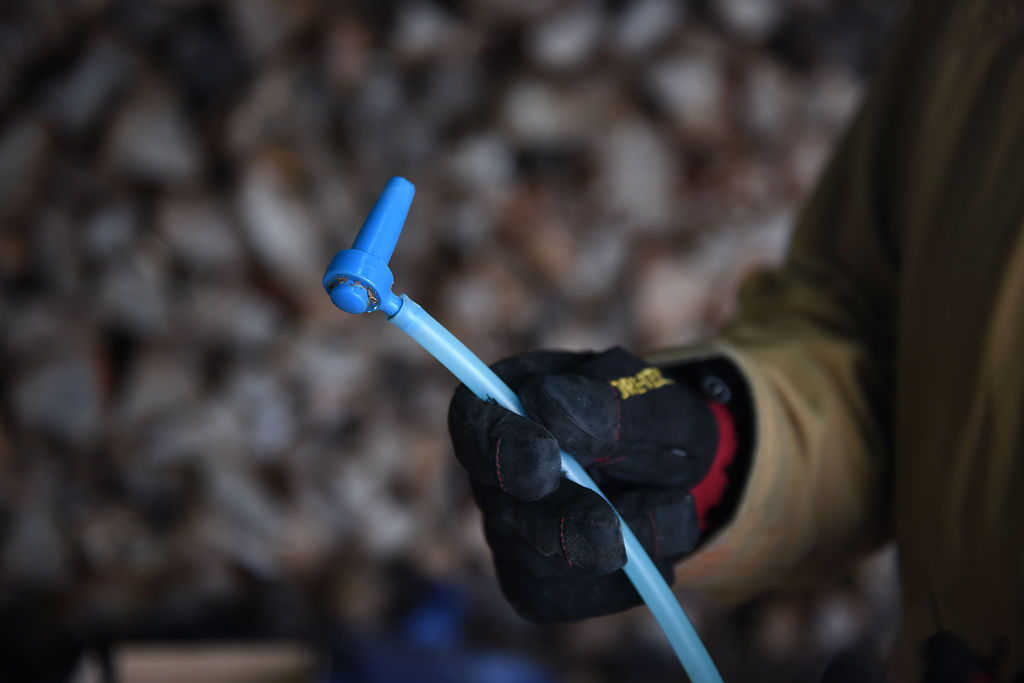 John Stolwyk, a retired engineer who lives in Columbia and has produced maple syrup for the past seven years, usually starts tapping trees in mid-January, but this time he prepared for the season much earlier.

In September, he launched the Missouri Maple Syrup Initiative website to encourage Missourians to make syrup.

“They can learn from my website how to do it and where to buy the supplies that they need,” he said. “And my website has helpful and instructive links for beginners who have never made it.”

He also uploads pictures and profiles of other maple syrup makers in Missouri.

“Most people think of maple syrup coming from other states, like Vermont, Maine, Massachusetts, New York or Canada,” he said.

But Stolwyk has spoken to about 20 syrup makers in the state — some of whom only do it as a hobby — and estimates actual production is closer to 1,500 gallons. He also has given talks at several libraries in eastern Missouri about making maple syrup.

Biggest cost is time and effort

With 220 trees on his in-laws’ farm in Cole County, Stolwyk’s family made 25 gallons in a recent year. To get 2.5 gallons of syrup, they need to boil 100 gallons of sap for 12 hours — 10 hours outdoors over a wood fire and two hours indoors on a kitchen stove, where the temperature can be better controlled.

Before collecting the sap, Stolwyk checks weather forecasts to decide when to tap and when to collect. When it’s tapping time, he drills holes in trees, inserts taps (called spiles), attaches bags, tubes or buckets to collect sap and waits for the flow, caused by the difference between winter night and day temperatures.

“It’s a lot of work and takes a lot of time and firewood,” he said. “You have to like being active, making things and getting out in the cold weather.”

James Brochtrup, who has produced maple syrup in Festus, 35 miles southwest of St. Louis, for four years, has tubing to connect trees and drain sap into totes. He then boils and concentrates sap with a reverse-osmosis machine that uses pressure to help the process.

“There’s no real rule about how to do it. People try to find the lowest cost or the most efficient way to do it,” Stolwyk said.

“When I created the group, there were five or six of us,” Brochtrup said. “Right now, we have 269 members.”

Old-fashioned approach can be done at no cost

There’s no extra cost to syrup making for Al Marrocco, who has been making and teaching about maple syrup for more than 35 years in Lonedell, southwest of St. Louis.

Marrocco said making syrup was nearly a lost art in Missouri, and he wants to reintroduce the process. Years ago, he sent samples to the Wisconsin State Fair and won a blue ribbon.

“I don’t buy anything,” Marrocco said. “I don’t use sap bags. I don’t use buckets bought from the dealers. I just use plastic jugs.”

After collecting sap, he puts it in a flat pan and cooks it over a wood fire. He doesn’t add anything or filter it.

“I make it the old-fashioned way,” Marrocco said. “When you use machines and de-foamers, ... it alters the taste. My syrup is 100% pure.”

“A lot of people … feel intimidated because they feel like they have to have a specialized pan, an osmosis machine and special taps. So, they never try to do it,” Marrocco said.

Even with only two trees, he said, it is possible to collect five gallons of sap and get half a pint of syrup each year.

“So, my goal is always teach families to make maple syrup and have a tradition in their life,” he added.

He has taught at least 30 families about his process, Marrocco said.

“And this is what I tell them: ‘If you make a mistake, so what? You’re learning from it, and it’s free,’” he said.

This is the fourth year that Patricia Straub, one of Marrocco’s “students,” has made maple syrup in New Jersey.

Ten years ago, a car accident took her nursing career away and left her with a traumatic brain injury.

She said she never thought about one day making maple syrup but has learned it can “make life much sweeter.”

Several years ago, Straub said, she did a DNA test and discovered Marrocco was her cousin.

After learning syrup making from him, every New Year’s Day she taps trees with her husband and two sons, and she hopes to keep it as a family tradition.

She said she hopes her sons will marry so “I will have grandchildren that I can show it to.”

“I just can’t sell it, because it’s so meaningful to me,” he said.

“That’s worth more than $$$,” he wrote in a Facebook message.

Stolwyk said he encourages people who have maple trees to make syrup because it’s good for people to get outside in the winter, get exercise and be with nature. And there is increasing demand for locally made, natural products, particularly at local farmers markets like the one in Columbia.

MU gets into maple syrup making

MU students and faculty will have chances to participate in maple syrup production in February. MU’s maple syrup producing program, run by the College of Agriculture, Food and Natural Resources’ Baskett Wildlife Research and Education Center near Ashland, allows students to make syrup.

“It’s not a course but more of an extracurricular learning opportunity,” said Benjamin Knapp, program leader and an MU natural resources professor. Students can earn internship credit, he added.

Knapp said the program has also provided opportunities to introduce syrup production to K-12 schools and the local community, with plans for a regular field day in the future.

He said the program’s scale is limited now partly because of students’ tight schedules and production procedures that are “very much weather-dependent.”

“You can’t say, ‘Next Wednesday, we’re gonna make syrup.’ We may say, ‘Hey, we need to do something out there today,’” he said. “And so that can make it difficult, because students have classes.”

Christal Gihring said her family in Cape Girardeau County produced 217 gallons of maple syrup in 2017 and sold it mostly in farmers markets. The financial proceeds help support her family to home-school four kids and prepare to send them to college, she said.

Stolwyk said he hopes his initiative can be a good start toward bringing local maple syrup production back to levels seen in the state years ago.

“I hope that getting publicity for this initiative will help people realize that maybe that tree in their yard,” he said, “they could make syrup.”

The MU Baskett Wildlife Research and Education Center taps trees every year and boils the sap to make maple syrup, but this winter's unseasonably warm temperatures have likely cut the season short.