New data released by the state Attorney General’s office shows black drivers in Columbia and Boone County continue to be stopped by law enforcement at a rate far exceeding that of white drivers.

The 2019 report shows that in both Columbia and Boone County, black drivers were stopped 4.3 times more frequently than white drivers. 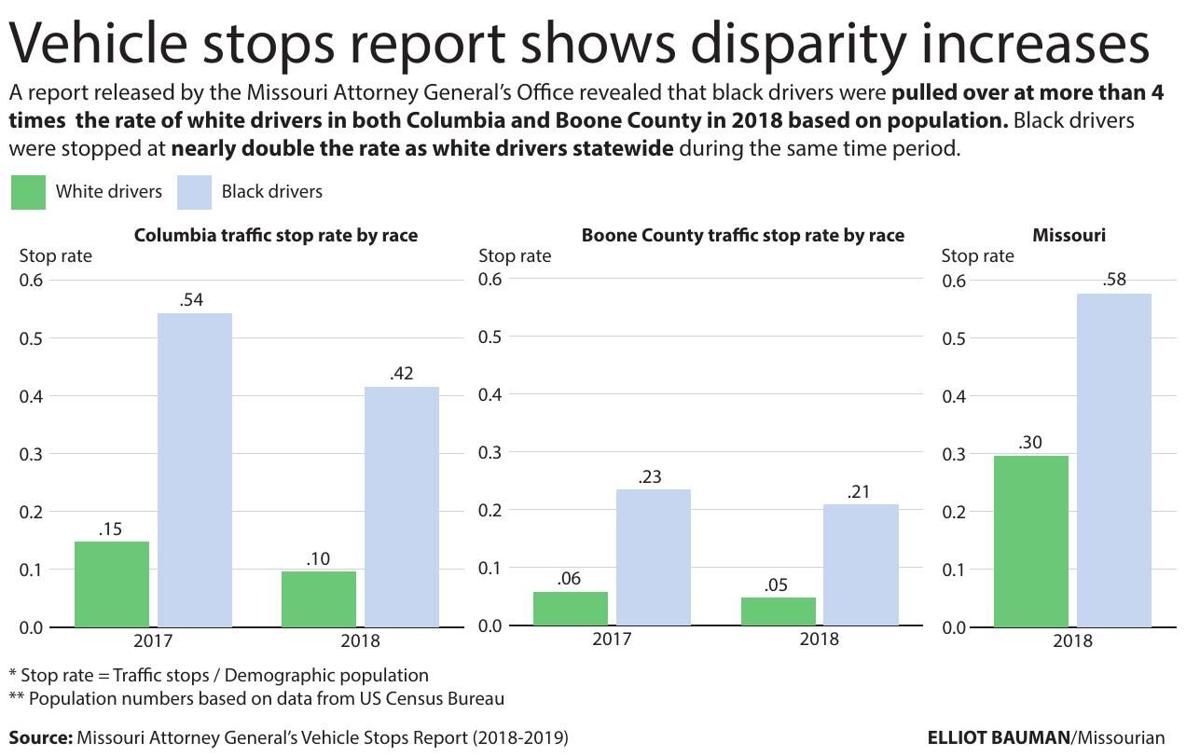 For example, the 2018 report noted black drivers were stopped at a rate 3.6 times greater than white drivers in Columbia and 4 times greater in Boone County.

The stop rates are determined by dividing the population of a specific demographic by the same demographic’s number of traffic stops. The Missourian used data from the local reports on stops and U.S. Census Bureau demographic numbers in creating these calculations.

The stop rates provide a more easily understood representation of the data than the disparity index that is used in the report.

The 2019 vehicle stops report was released by the Attorney General’s office Friday. The vehicle stops report is an annual collection of all vehicle stops by law enforcement agencies across Missouri. The data is then broken down by race, age, search rate, arrest rate and reason for stop, among other categories. It is based on 2010 census population data and uses data collected during 2018.

After a slight decline in 2018, racial disparity in traffic stops — the representation used in the report — has risen slightly, according to the report. The disparity index for black drivers grew from 2018, meaning black drivers are more likely to be pulled over than white drivers.

The disparity index compares the percentage of vehicle stops of a certain group to the percentage of a community’s individuals of that group who are of driving age, according to the Attorney General’s website.

It is unclear what concrete steps the Columbia Police Department has taken to address the disparity in the past year. In an email, police spokesperson Jeff Pitts said police officers are only required to take online training on “bias, racial profiling, racial disparity and other topics related to police treatment of our fellow citizens.”

“On an annual basis, our department has continued to receive training on bias and Fair and Impartial Policing and Missouri laws concerning the treatment of minority groups,” Pitts stated.

In April 2019, Police Chief Geoff Jones appointed the Columbia Vehicle Stop Committee to address the clear disparities in the city’s stop rates. Jones declined to comment on the new report until he hears from the Vehicle Stops Committee, which has temporarily halted meetings due to health concerns over COVID-19, according to Pitts.

The Sheriff’s Department declined a request for an interview about the latest traffic stop numbers.

The report shows that stop rates for Hispanics and Asians by both agencies was close to the rate for white drivers.

Both the Columbia Police Department and the Boone County Sheriff’s Department reported their traffic stop numbers to the state attorney general’s office earlier this year.