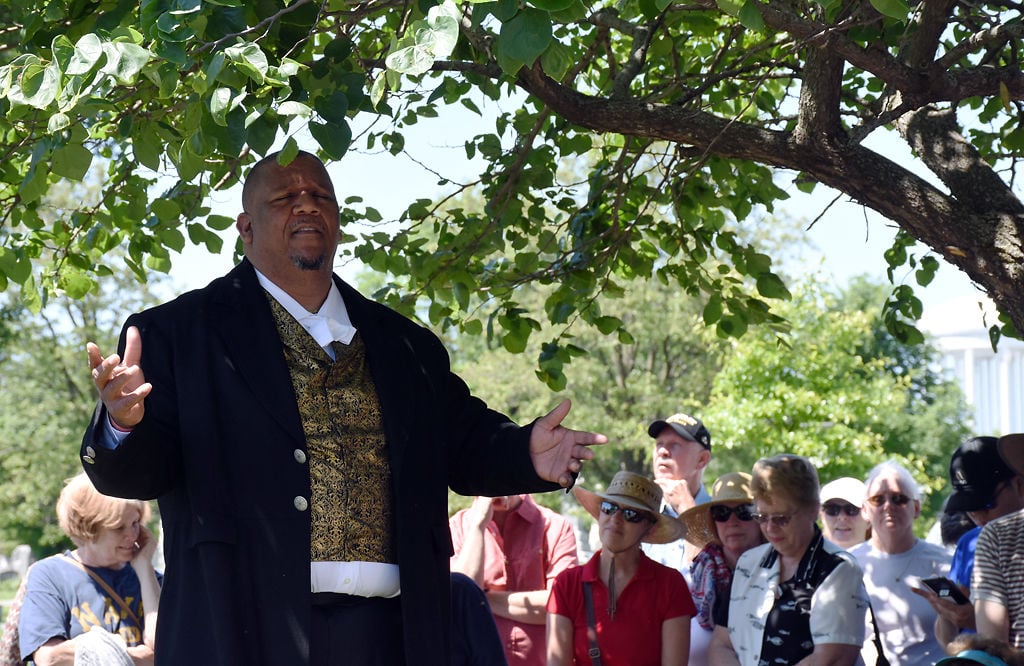 Lorne Jackman performs as John William "Blind" Boone on Monday at the Columbia Cemetery. When asked about Boone, Jackman said: "I would describe him as a boisterous guy. He's just one of those guys that is gifted and recognized his talent early on in age and was able to make himself very famous across the country." 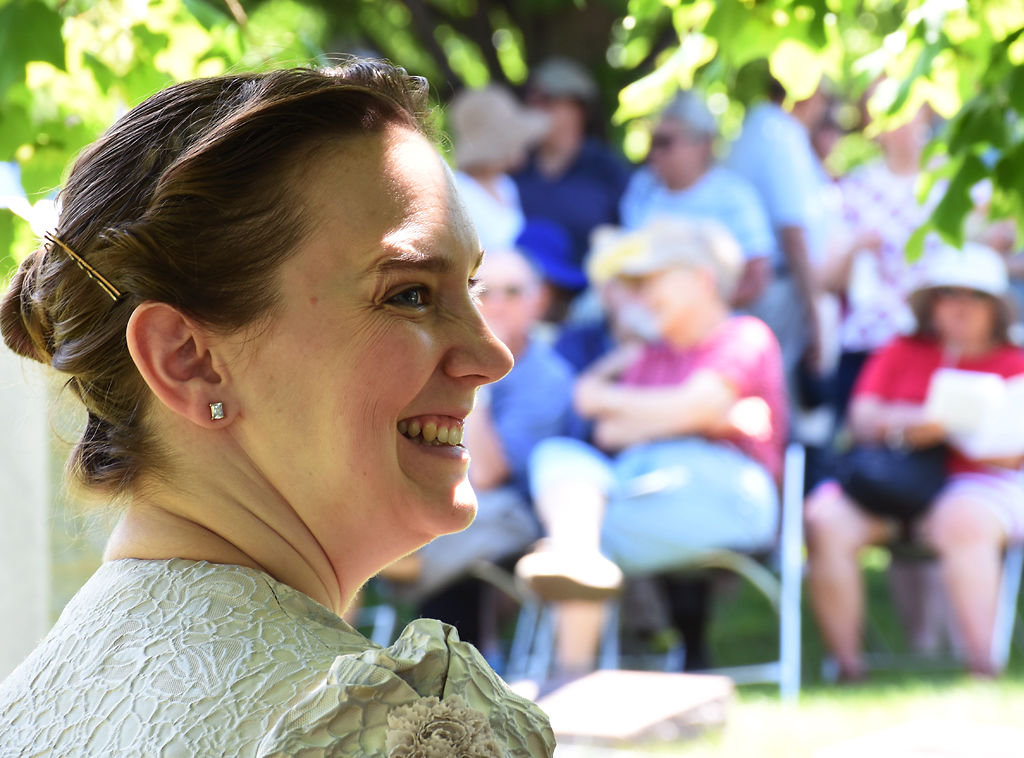 Mary Shaw waits between her performances as Luella St. Clair Moss on Monday at the Columbia Cemetery. Moss was the first female president of Christian College, which later became Columbia College, and the first president of the Missouri League of Women Voters. "She had a lot of firsts in her life and was a very determined, driven person," Shaw said. 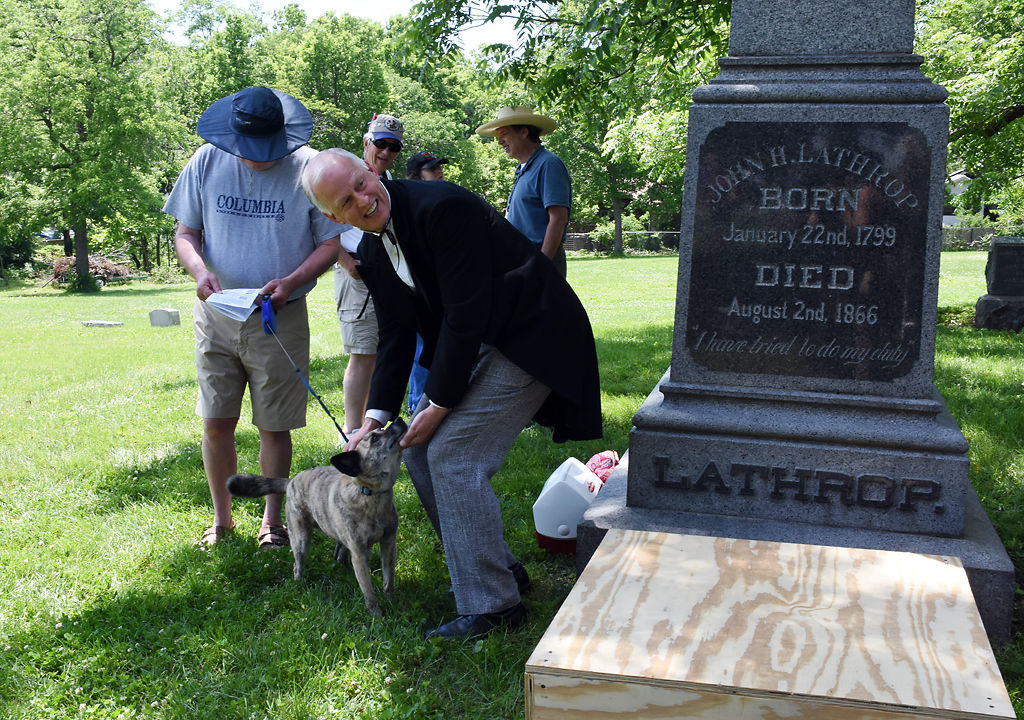 Ed Hanson laughs with his audience after performing a monologue to portray John Hiram Lathrop on Monday at the Columbia Cemetery. Hanson is the founder of Talking Horse Productions, a Columbia theater company.

COLUMBIA — As a cool breeze blew through the trees at the Columbia Cemetery, John “Blind” Boone stood at his grave with a deprecating smile for the crowd of roughly 20 that had gathered to hear him speak.

“I wish you guys could have heard me play,” he said. “I would have made you smile.”

The crowd did smile.

On Monday afternoon, eight historical figures were brought back to life by local actors at Columbia Cemetery. The actors each performed original monologues, written by Chris Campbell, JJ Musgrove and Kate Musgrove, at the grave sites of the characters they portrayed.

Lorne Jackman portrayed Blind Boone for the event, clad in black slacks, a white button-down, a gold and black patterned vest and a thick black overcoat in the 80-degree heat and bright sunshine.

Portraying the famous concert pianist, who lost his eyesight as a baby, proved to be enjoyable for the former high school actor turned deputy marshal.

“When people were laughing, I figured I wasn’t doing too bad,” said Jackman, who had to have his eyes closed for the entire monologue.

Jackman was surprised by the turnout for the event. As he watched a large crowd of audience members approaching the site of the musician’s grave, he joked with those already sitting there that he hoped the people were going to walk right past him.

“That was scary,” he said after his first of four performances. “I was hoping they would move on to another guy, but they decided to stay here.”

“I was really drawn to Lathrop because I was a teacher for 28 years,” he said. “I thought it was fascinating that he was sort of duped into coming to Columbia to be the president of a university that didn’t even exist (yet).”

“I try to project a guy that would (have been) difficult to handle from an administrative standpoint but was a good teacher,” Crane said. “It's fun. Of course I've worried about it, you know, you worry about screwing up or drawing a blank or something. But once you get going, it works out alright.”

Nollie Moore portrayed MU journalism school founder Walter Williams. He delivered his monologue with an assuredness he said he derived from Williams' personality.

"He, just to me, sort of embodies confidence," said Moore. "And for me it was more about telling his story and less about creating a character."

Beth and Gary Stangler, who both graduated from MU, said they learned a lot from the monologues.

“I know Swallow Hall. I know Hawkins Gentry School. I never give thoughts to why they were named after what they were,” Gary Stangler said. “It evokes a lot of connecting the dots.”

The Stanglers said they love coming to cemeteries and learning about what happened decades ago.

The Columbia Cemetery is the oldest continuous business in the city and is listed on the National Register of Historic Places. The Friends of the Historic Columbia Cemetery was founded in 2016 to support it. This marks the first year they have put on the monologues.

The organizers were surprised by the turnout — they had only printed 450 programs. They ran out before the event's conclusion and ended up recycling programs from attendees who were leaving for people arriving later. Organizers estimate over 800 people showed up for the event.

"We just wanted to show off Columbia and its roots," said Cindy Mustard, a cemetery board member and one of the event's organizers.

Ed Hanson thinks events like this are important for the community.

The Friends of the Historic Columbia Cemetery hopes to continue the monologues next year. More stories remain buried in the cemetery's 35 acres of land.

The historical figures (and the actors who portrayed them) were:

Historical figures to be brought to life at Memorial Day event

Organizer Chris Campbell said people can expect to "learn things they never knew before" about the nine historical figures who will be portrayed.