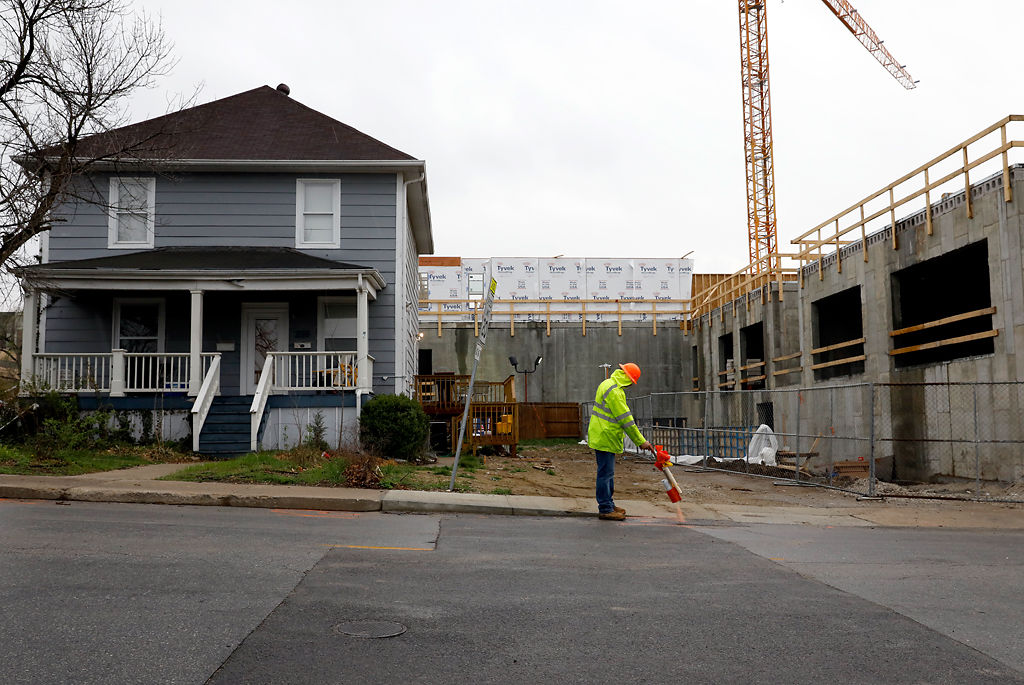 A United States Infrastructure Corporation employee spray paints orange construction markings on the asphalt on Friday in front of the Fifth Street house. Brookside, which is developing the housing, originally attempted to purchase and demolish the house, but said the starting price was too high. 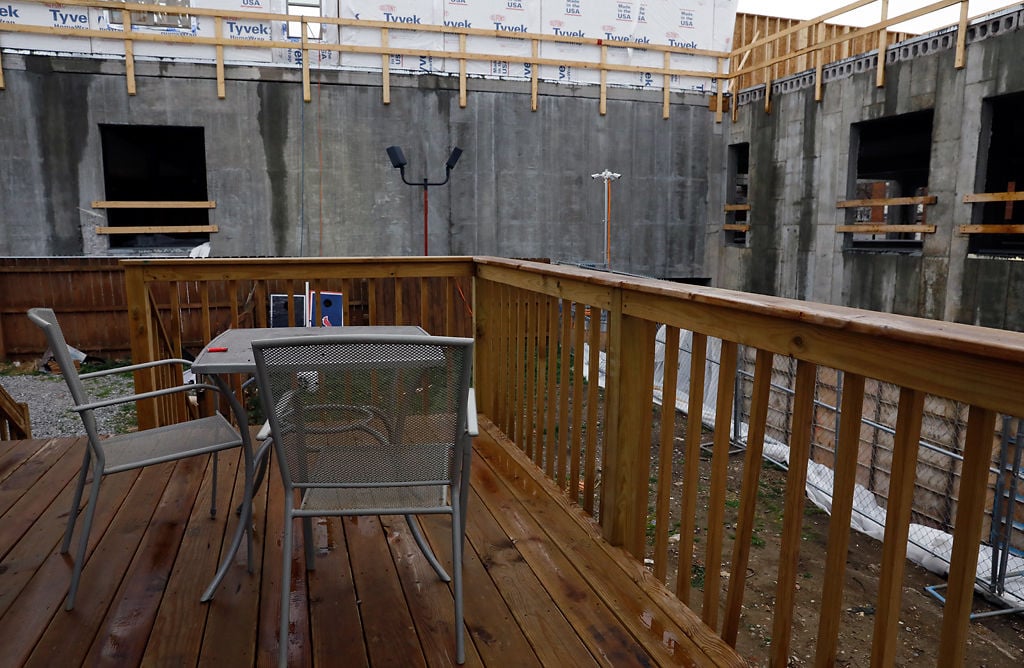 Metal deck chairs overlook a panorama of concrete on Friday. The student housing development is being built directly next door to the Fifth Street. The house is a rental property currently occupied by six college students.

A United States Infrastructure Corporation employee spray paints orange construction markings on the asphalt on Friday in front of the Fifth Street house. Brookside, which is developing the housing, originally attempted to purchase and demolish the house, but said the starting price was too high.

Metal deck chairs overlook a panorama of concrete on Friday. The student housing development is being built directly next door to the Fifth Street. The house is a rental property currently occupied by six college students.

COLUMBIA — The house that sits at 216 S. Fifth St. has been many things to many people: a café, a Mexican restaurant and a bookstore.

At the moment, it's a rental property. Six college students rent two apartments divided among the house's three floors, including the basement.

From 1946 to 1958, though, the property was a home to Columbia resident David Matney, his nine siblings and his parents.

"I was born, and this is the home I went home to," Matney said. "We rented it out to students when we went to Germany to see my father, who was in the service. My brother was born (in Germany), and he came back to this house."

Matney had a hankering to tour his boyhood home when he discovered a Brookside apartment building would be built on two sides of the house. He had assumed the house would be purchased and demolished as part of the Brookside project.

The Brookside developers had started negotiations with the owners of the property — Adam Dushoff, Jeremy Brown and Matt Jenne — but the starting price was too high, Brookside spokesman Jack Cardetti said.

The company that built the other Brookside buildings already owned the land surrounding the house under the name 6th and Elm, LLC, after the closures of Casablanca and Bengals Bar and Grill, according to previous Missourian reporting.

Construction on the new apartment building began in the fall, and when it's done this summer, it will form an L-shape wrapping around the east and south sides of the Fifth Street house. Dushoff said the development's impact on the house remains to be seen.

"Obviously, any change is going to potentially create either positives or negatives," Dushoff said. "We are not against somebody building something on their property, and as long as it doesn't create too much of a problem on our property, we're happy to work it out. And that's exactly what we did in this situation."

Matney has been tasked with relaying information about the house to his eight surviving siblings. The family moved when Matney was about 12 years old, into his grandmother's house after she died. Although he was young, he remembers much of his time there

Matney has been documenting the rise of the apartment complex with a friend. The pair take pictures in front of the house, from the side and from the top of a nearby parking garage, at least once a week.

"We started almost a year ago now, and we can make a flip board, and you'll be able to see it go down to the ground, below ground and then come back up," Matney said. "We've got markers so even if it will be a little off, it'll just look like an old-timey movie with a shutter."

Walk into the Matney house, which the Boone County Assessor's Office estimates was built in 1935, and it's immediately apparent that college students are renting it. A dartboard hangs in the entryway. Coolers are stacked by the stairs. A small, plastic basketball hoop hangs above the door to the living room. Neon beer signs adorn the wall next to a deer head decked out in sports apparel. Downstairs, there's an Missouri basketball-themed beer-pong table next to the kitchen.

The students who live there agreed to let Matney come in and take a look around. Despite the changes in decor, Matney recognized many of the house's features, such as the sliding pocket doors and the metal vent grates in the floor. He mentioned differences when he saw them. Dushoff chimed in when he could.

"There's a lot of respect for the property," Matney said. "I can see that."

Dushoff and his partners, who also own Addison's and Sophia's restaurant, have owned the house since 2000 or 2001. Matney knows what the house used to look like, and Dushoff knows the renovations his group has made. Neither, though, knows exactly what happened during the 42 years between the time Matney moved out and the new owners took over.

Matney pointed out in the entryway where he and his siblings would practice playing piano, or where they'd lie on the floor and listen to the radio in the living room. The basement was partially finished when the house came into the hands of Dushoff and his partners' hands, but Matney saw something familiar in the unique grain of the floor.

"It looks like something my grandfather would do," Matney said. "He loved wood."

A broken leg forced Matney, who was born in 1946, to take the stairs slowly. The stairs, which Dushoff believes are original, creaked as Matney placed his weight on them. His cane smacked against the wood with each step.

Once he got to the top, though, Matney recalled the living arrangements he and his siblings had. The three boys shared one bedroom, and the seven girls were split among the remaining three. All 10 shared a single bathroom.

Looking around his old bedroom, Matney envisioned the bed he shared with his two brothers, which was placed lengthwise so the boys would have plenty of lateral room. Whoever made it to the bed first each night got to pick his position.

Matney pointed out the step-up closet where he once took a nap and frightened his family. He laughed at the memory.

"They couldn't find me anywhere, and it got dark," Matney said. "They called the police and everything. When I woke up and came out, I was in big trouble."

The outside of the house has changed radically. The yard is mostly dirt from the construction next door. Broken plastic spoons litter the grass where Matney and his siblings used to sell newspapers to cars in the traffic jams coming and going to Missouri football games. There are a few less trees.

When Matney lived in the neighborhood, there was an auto repair place down the block, in addition to a Catholic old folk's home, run by nuns.

Dushoff asked Matney about a cement circle in the ground on the north side of the house. The edge of the circle was barely visible through the soil.

"It was a koi pond," Matney said. "We had goldfish yearround and lily pads."

Dushoff said he and his partners bought the property more for its downtown zoning than for the house.

"We thought we had something that was definitely going to increase in value more dramatically than just a house out in the subdivision somewhere," Dushoff said. "The C-2 value of the property, which is the zoning of the underlying ground, had a greater value for us than the house itself."

The space is unlikely to remain a rental property, though there are no plans to change it just yet, especially with the city's pending zoning overhaul and the downtown building moratorium that remains in the works, Dushoff said.

"Wouldn't you believe that would be a great spot for a 5,000-square-foot restaurant?" Dushoff said. "That's exactly the space we have in that area. We have batted things around, but it's one of those issues where there's nothing more than pie in the sky at the moment."

Matney understands that the house has changed and its future is uncertain. But he's just happy he got to take a look inside — one more time.

Origin Constructors will close sections of Fifth, Sixth and Elm streets, as well as nearby sidewalks, while it builds new apartments over the next year. Mayor Brian Treece is frustrated the company will escape closure fees the council is considering.