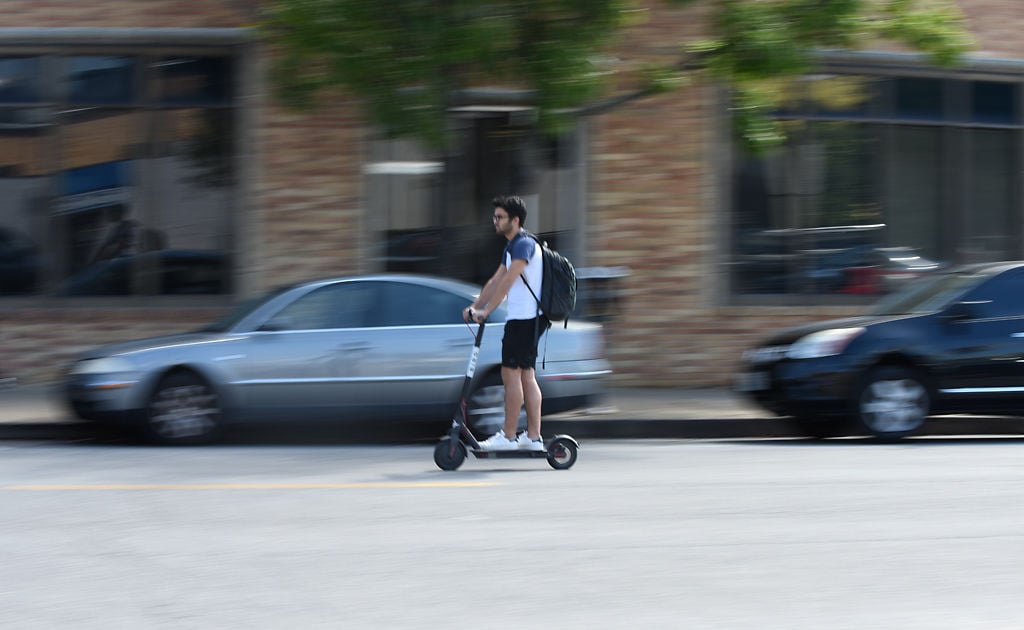 Jack Bizar goes to Lucky's Market on a Bird scooter on Thursday, Sept. 13, 2018 in downtown Columbia. Bizar gets on the scooter every once in a while when he doesn't feel like walking. "I think it's awesome," Bizar said. 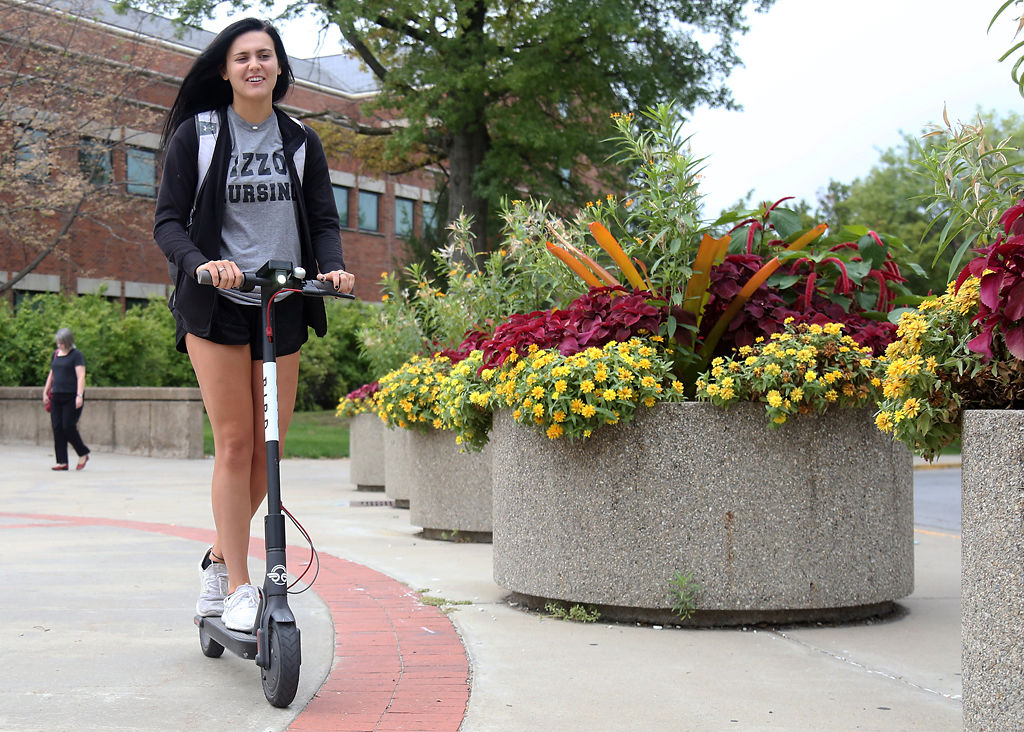 Allie Mabley, an MU student, rides a Bird scooter through Speakers Circle on her way to class last month. The scooters are currently operating in Columbia without a business license, but the company is working with the city to create a one-year contract.

Jack Bizar goes to Lucky's Market on a Bird scooter on Thursday, Sept. 13, 2018 in downtown Columbia. Bizar gets on the scooter every once in a while when he doesn't feel like walking. "I think it's awesome," Bizar said.

Allie Mabley, an MU student, rides a Bird scooter through Speakers Circle on her way to class last month. The scooters are currently operating in Columbia without a business license, but the company is working with the city to create a one-year contract.

After arriving just over a month ago, Bird’s electric scooters are already a Columbia staple, but the company isn’t officially welcome.

City officials are in the process of drafting a one-year agreement to address safety and regulation concerns, and the company has yet to acquire a business license to operate.

Bird may be new to Columbia, but none of this is new to Bird.

City officials across the country have been waking up to find their sidewalks cluttered by electric scooters from various companies with hip-sounding, monosyllabic names, and Bird is one of the most high- profile. The company regularly drops off scooters in cities without warning, forcing local governments to scramble.

Some cities have passed ordinances requiring scooter companies to pay for the ability to operate, to limit the number of scooters, to share data with the city, or to educate riders on safety and regulations. Some cities have banned the scooters outright temporarily while regulations are decided upon, and others have created temporary “pilot programs” during which they monitor the scooter programs to see how best they should be regulated. 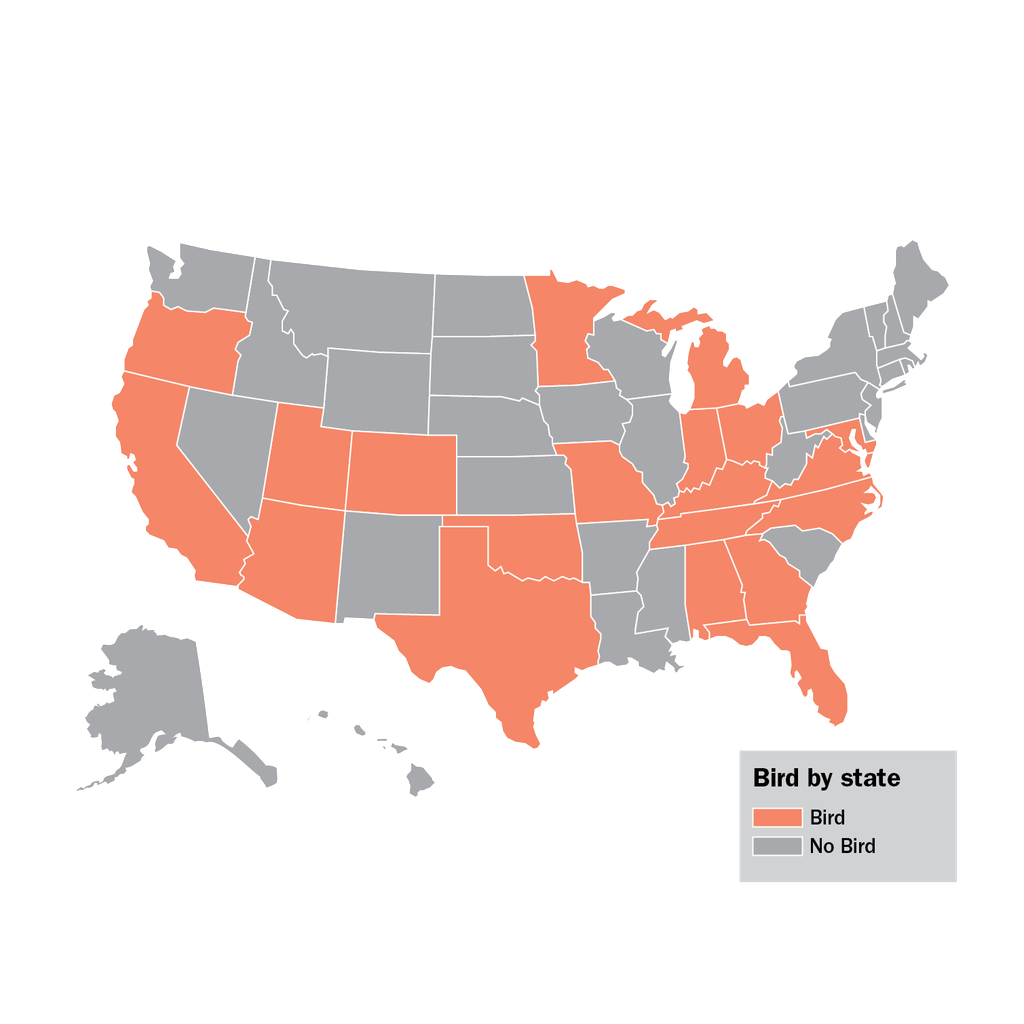 Twenty universities have chosen to partner with Bird, according to the company’s website. The company made no attempt to contact MU officials before arriving in Columbia, however, and the university is concerned about the scooters’ impact on campus safety, according to previous Missourian reporting.

“It could be seen either as a solution or a problem,” said Ben Jose, a spokesperson for the San Francisco Municipal Transportation Agency. “On one hand, they provide people with a convenient option to get around the city without contributing to congestion, and they could possibly increase access to public transit. On the other hand ... scooters scattered across our sidewalks were really raised as a concern.”

Bird — along with Lime and Spin, other companies with scooter sharing programs — dropped off electric scooters in San Francisco in March. According to Jose, the city received more than 2,000 public complaints about obstructed sidewalks and sidewalk riding, illegal for motorized scooters in California. In response, the San Francisco Board of Supervisors met in April to create a new law requiring shared scooter programs to obtain a permit from the city in order to park scooters on sidewalks and other public areas, and the SMFTA created a process for companies seeking a permit to apply. When the law took effect in early June, the companies pulled their scooters from the streets and began sending in applications.

The application requirements were open-ended prompts like “Please describe your strategies for ensuring your riders are wearing helmets,” Jose said, in the hopes that companies would take initiative and propose innovative solutions to safety and legal issues. In a graphic grading the 12 applicants on 12 assessment parameters, the city graded Bird “poor” in all categories but two, an assessment tied with Razor for worst of all the applicants. Jose said Bird didn’t provide detail on how it would listen and respond to community feedback or how it would balance the distribution of its scooters across the city.

Of the 12 applicants, only companies Scoot and Skip were approved. The city aims to issue the first permit to operate in the city on Oct. 15.

In approaching regulations, San Francisco had one big advantage: Having already dealt with new bike sharing and ride hailing programs, San Francisco officials had already created a set of “guiding principles for emerging mobility services and technologies,” which provided the city with a framework for figuring out how the scooters could fit into its transportation network. Not all cities are so prepared, but the National Association of City Transportation Officials has published a set of guidelines on its website that it says are the minimum that “all cities should require for managing this new industry on city streets.”

Sometimes, though, pre-established regulations can be a hindrance for cities tackling the scooter issue.

In Denver, electric scooters are considered “toy vehicles” and are therefore not allowed in streets or bike lanes, according to Denver Public Works. This means they can only be ridden on sidewalks — the exact thing many cities are trying to avoid.

“Currently, Denver Public Works is navigating through local and state law to see if we can find a way to allow the electric scooters in bike lanes,” said Heather Burke, a public information specialist with Denver Public Works, “but we’re not there yet. In the meantime, we’re asking riders to watch their speed on the sidewalk and yield to pedestrians at all times.”

Although not all cases are as extreme as Denver’s, many cities find themselves struggling to find fitting regulations for the scooters under existing law. Terry Floyd, development coordinator for the City of Norman, Oklahoma, said the city doesn’t have regulations that quite match the new technology.

“Do you treat them just like a bicycle?” Floyd asked. “It just wasn’t something that was conceived when some our ordinances were written back in the ’60s and ’70s.”

Norman law prevents the scooters from being located in public right-of-ways, so the city is impounding scooters found on public land — where Floyd said Birds were often dropped off in “nests” to be picked up by riders — until city officials can issue a permit that allows this. Once that’s completed, Floyd said, the city can begin to develop operational agreements for the company via new ordinances.

On its website, Bird states that it works closely with cities to help make transportation better. However, some cities have reported that the process doesn’t always go smoothly.

In St. Paul, Minnesota — where Bird arrived in July, according to the Pioneer Press — city officials established a limit of 150 scooters for each scooter company operating there during a pilot program running through November. The contract also specifies the companies will pay the city $1 per day, per scooter, according to St. Paul Public Works, and requires that they provide monthly data reports with the city, including information on the number of rides each month, the number of scooters in service and safety reports for any scooter-involved crashes.

But the agreement doesn’t specify what these reports are supposed to look like. Lime gives city officials access to a “dashboard” with some basic statistics, according to Reuben Collins, a transportation engineer with St. Paul Public Works, but as of Saturday, neither company had met the city’s Sept. 10 deadline to provide the full data reports.

Collins has some advice for Columbia and other cities wrestling with the scooters’ arrival.

“My general recommendations would be to be very explicit in the contract about exactly what information and what tools you expect the vendors to provide to you to help you manage the program,” Collins said.

As Columbia officials work to figure out what to do with Bird’s scooters, another company is eyeing the market: Lime.

In an email, a Lime representative asked Columbia leadership to provide information on what the city plans to do with Bird’s scooters, criticizing Bird’s aggressive business model.

The statement says Lime “cannot ignore the competitive challenge that Bird’s continued deployment in Columbia is to our core business model of providing dock-free mobility to solve urban transportation challenges. As such, we are considering our next steps as a company if Bird is allowed to continue to operate.”

It remains to be seen if Columbia is big enough for the two scooter companies. If other cities are any indication, though, the city might not have much of a say.Supervising editor is Mark Horvit: horvitm@missouri.edu.

At city commission meeting, community opinions on scooters are split

The main concerns people had were regarding making sidewalks safe, especially for people with disabilities. Others said Columbia should give Bird a chance.