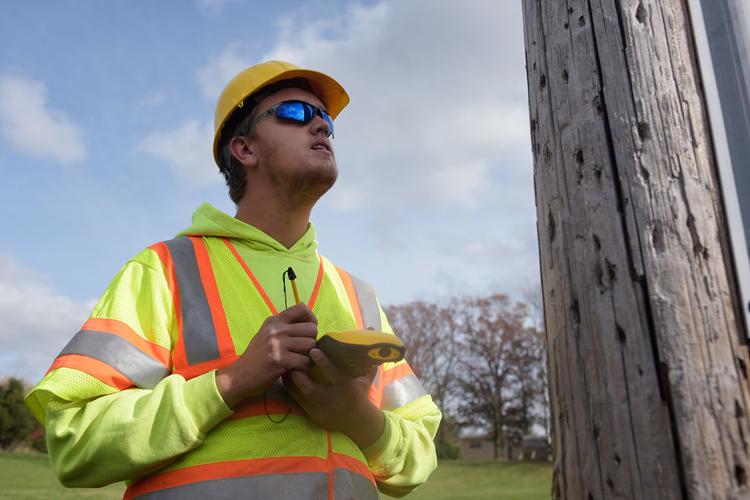 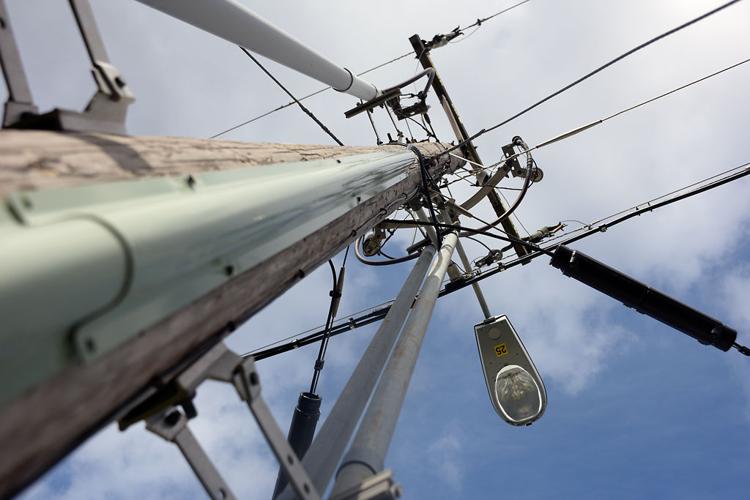 A utility pole towers over a parking lot on Nov. 18. Utility poles are typically made of wood from Douglas fir or southern yellow pine trees because they are more receptive to the protective coating that workers use to prevent the poles from rotting. 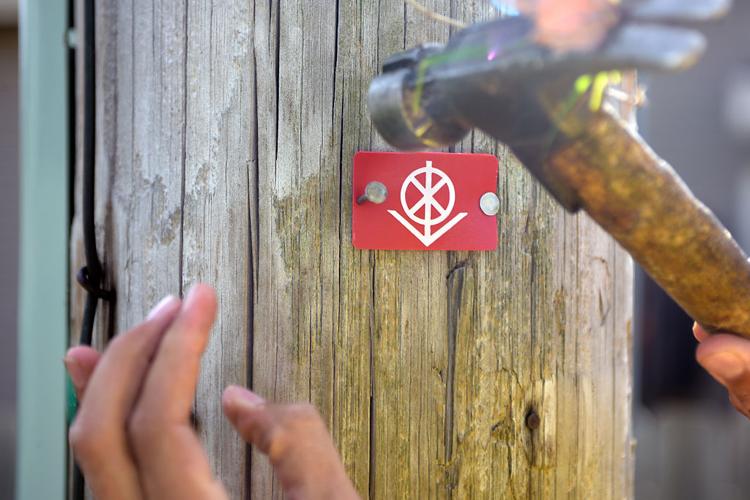 Ben Lee hammers a tag into a utility pole in Columbia on Nov. 18. The tag signifies that the pole is damaged and is need of replacement.

A utility pole towers over a parking lot on Nov. 18. Utility poles are typically made of wood from Douglas fir or southern yellow pine trees because they are more receptive to the protective coating that workers use to prevent the poles from rotting.

Ben Lee hammers a tag into a utility pole in Columbia on Nov. 18. The tag signifies that the pole is damaged and is need of replacement.

COLUMBIA — The metal slab attached to the top of a utility pole is called a squirrel guard.

Its purpose is unambiguous — it keeps squirrels away from power lines by interfering with their grip while they scurry around the pole below.

Ben Lee isn't quite convinced of the effectiveness of squirrel guards, and hints that there is a reason they're only stuck to some poles. And he knows best, at least on issues regarding utility pole protection.

Lee is a utility inspector from Joplin whose family company, Lee Inspection, was hired by the city to survey the approximately 16,000 utility poles installed before the 1980s. In Columbia, the ones left to be tested are concentrated near the center of the city.

The inspection includes a test of the pole's durability, a notation of which companies are running services through the wires and a precise GPS location for each pole.

Lee started inspecting Columbia's utility poles in August and plans to be done by January. In the meantime, he works linearly, moving from pole to pole and highlighting completed areas on his map.

The first step in his inspection is a physical test: Lee circles a pole with his hammer, whacking at different angles in order to hear if the wood has become too hollow. Hollowness indicates termites or natural decay.

Most poles pass this test. Lee described the satisfactory sound like the dull thud of a baseball bat.

If a utility pole fails the test, its contact with Lee's hammer will yield an empty smack. This indicates hollowness, prompting Lee to conduct a resistance test by boring into the wood with a power drill. If his drill slips right in, the pole is deemed faulty.

Unsatisfactory poles get marked with a red metal tag and the year '16. Conversely, utility poles that pass Lee's inspection get a green mark.

"Once I put that tag on, I take responsibility for that pole for the next 10 years," Lee said.

Although the average inspection interval for utility poles is 10 years, how frequently poles are checked depends on their type. The ones Lee is inspecting are lower-voltage poles that serve houses and were last checked in 2003, Columbia Water and Light spokeswoman Connie Kacprowicz said.

Most utility poles in Missouri are made from southern yellow pine or Douglas firtrees that are less susceptible to decay and take the transformation into utility poles well, Lee said.  Utility poles have a lifespan of about 20-60 years.

In addition to the physical test, Lee gets an exact GPS location of each pole. Kacprowicz said the city requests data of companies with telecommunication cables attached to the poles.

Lee said it's important to know exactly where all the poles stand so that in the case of an emergency, the city can send out its workers to fix a fallen line or damaged pole.

If he records a pole as a danger, the city will usually be out to fix it within a few hours, Lee said. Less urgent issues should be fixed within the year.

As of Nov. 30, the city had replaced 12 of the 8,088 poles inspected so far. If a pole needs to be swapped out entirely, it costs the city approximately $4,000 for equipment and labor.

Lee estimates about 10 percent of utility poles will need to be fixed by the time he's finished.

The job of inspecting utility poles gives him a sense of accomplishment, Lee said. Whether or not he's working alongside a partner, which is usually the case, he likes moving from A to Z across the landscape.

"We follow the line," Lee said.  "We get to see some beautiful places."