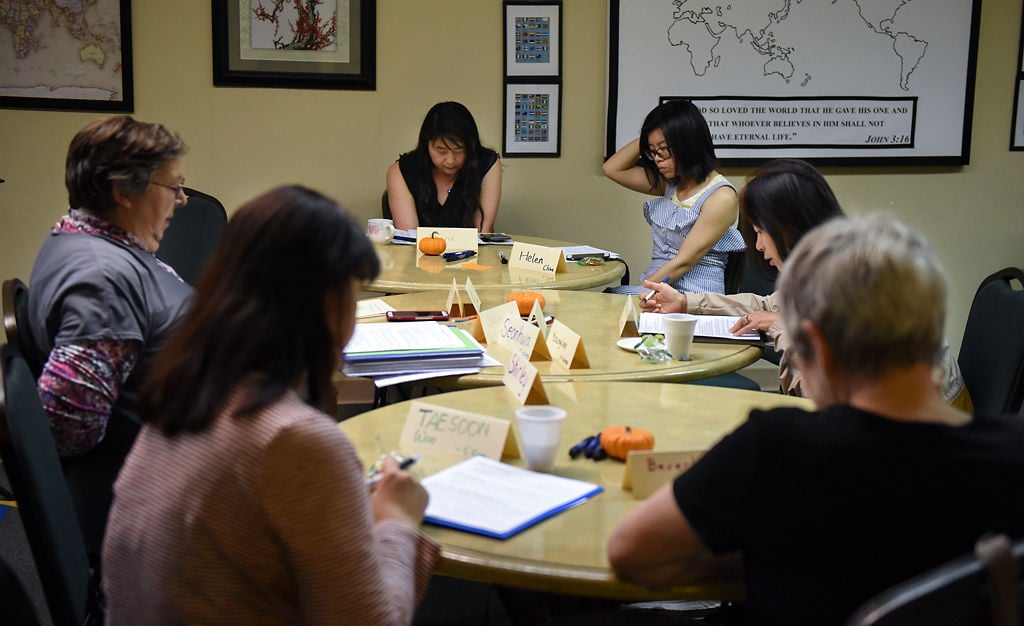 Shirley Colbert, the director of the International Friends Center, holds a weekly meeting Oct. 9 at the center. The meeting gathered women from different cultures and backgrounds, including South Korea, China and Vietnam to improve English and learn American culture. 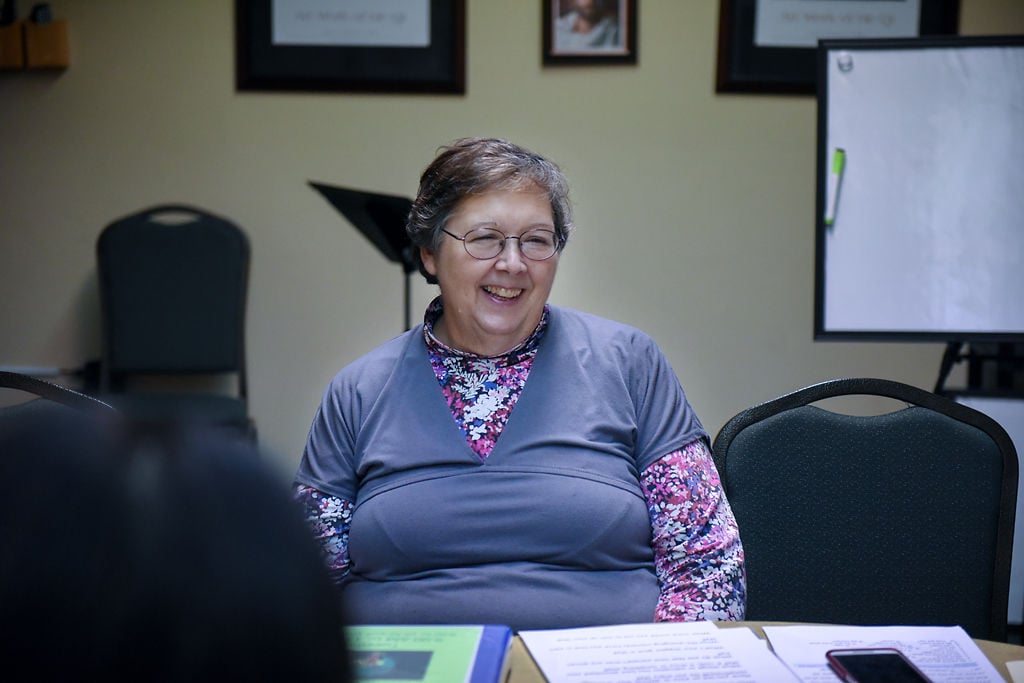 Shirley Colbert smiles during a discussion about the topic “life” among her students on Oct. 9 at International Friends Center. “Their husbands are students, and they have a greater felt need for more interaction, and this is a place where they can practice English and learn culture,” Colbert said. 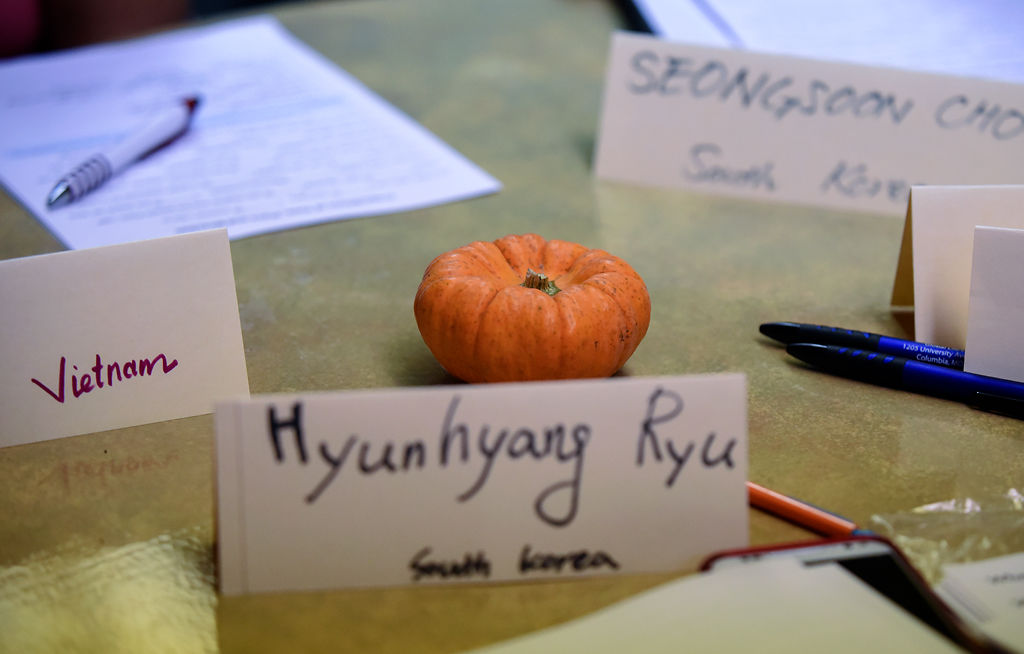 Name cards, class handouts and pens are fully prepared before women arrive for a meeting Oct. 9 at International Friends Center. The weekly English class started in 2016 and has served over 40 women from different countries, Shirley Colbert said. 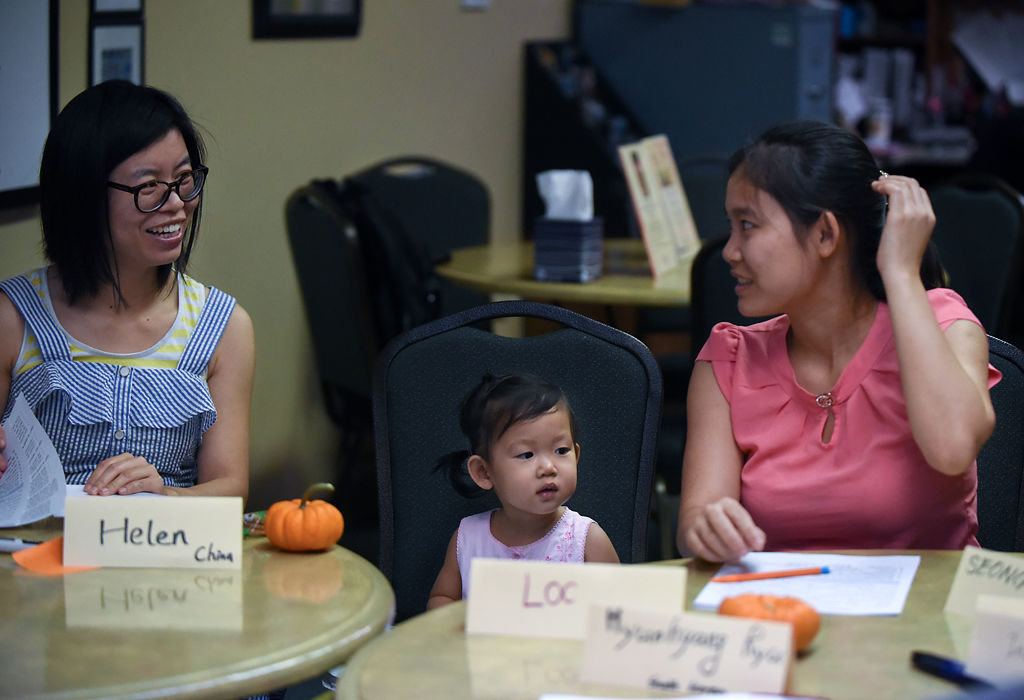 From left, Xinxiu Fang, Anna Tran, 1, and Anna’s mother, Loc Tran, discuss the class assignment during the English meeting Oct. 9 at the International Friends Center. Fang came to Columbia two years ago. She said that as a housewife and mother, she feels lonely sometimes. The organization helps her not only learn English but also make friends. “When we have problems in life, they help us to deal with it,” Fang said.

On a recent Tuesday morning, Shirley Colbert walked into a room full of international women and asked them, “What’s your temperature today?”

Colbert wanted them to rank their day. Not doing so well gets a one. Having an excellent day hits a five.

“My temperature is a four today,” one woman reported, indicating that her day wasn’t going perfectly, but she was glad to be in the room.

Colbert’s audience, all non-English speakers from China, Korea, Saudi Arabia and Brazil, belong to a weekly ministry called World of Women, or as members call it, WOW. It meets every Tuesday morning in a room on University Avenue.

Founded in 2016 as part of the International Friends Center, WOW has served as many as 70 women from 10 countries during the last two years.

The Friends Center is sponsored by interFACE Ministries, a national organization, as well as local churches. The center aims to welcome anyone new to America in an atmosphere of mutual respect and acceptance.

Many of the women in WOW have difficulty expressing themselves in English, so conversation has become a crucial way to learn the language. But the meetings also offer a free, intimate space to explore the difficulties that come with moving to a new country, such as feelings of isolation, financial matters and cultural differences.Meetings even cover cooking and American holidays.

The meetings not only provide needed interaction, the women say, but also comfort and support between everyone involved — three hours of talking and learning every week often show the women that they have much in common.

They might have different habits, languages and backgrounds, but one thing makes them equal: They are all integrating into a new culture.

In 2013, women represented 51 percent of the foreign-born population in the United States, or 21.2 million out of a total immigrant population of 41.3 million, according to the Migration Policy Institute.

The largest numbers were from Mexico, the Philippines, China and India. According to the Migration Policy Institute, immigrants were more likely to be married than their U.S.-born counterparts, but fewer had a high-school education than their American peers.

Yet education varied from country to country. For instance, female immigrants from Asian countries were more likely to have a bachelor’s degree or higher than women from Latin America.

Colbert’s interest in the international community began when she worked for the Asian Affairs Center at MU in 2010. She taught a program limited to spouses of scholars from Asia.

After six years, she decided she wanted to expand the program and be more inclusive. Her husband, Craig, encouraged her to start World of Women.

The Colberts had founded a Christian organization called the International Friends Center in 1986.

By 2016, Colbert said, it seemed particularly appropriate to start a program for women, who tend to stay at home all day with little communication and socialization and have less contact with English speakers.

“A lot of (these) women are isolated,” her husband said. “While their husbands are out learning English, going to classes, meeting people, having friends ... their wives are stuck at home, and they don’t do anything.”

Charlette Heyer, a volunteer for WOW, describes Shirley Colbert as warm, friendly and hospitable. Heyer said she likes the way the meetings bring together multicultural women and help build a familiar, confident vibe.

It allows women to meet and interact with Americans to practice their English and learn more about the culture of the U.S., she said.

The Colberts have lived in other countries, Heyer said, “so they kind of know how is to be ... an international.”

“Without WOW class, maybe we all (be) sitting at home watching television,” said Taesoon Woo, who attends World of Women meetings.

Woo joined the group in October 2017, two months after she came to Columbia from South Korea with her husband and two children. Her husband decided to take a Global Leadership Program at the Asian Affairs Center for two years.

She said she was alone and feeling depressed while her children and husband were in school. She said she found the WOW meetings as a good way to learn more English and interact with others.

She said she likes the activities they do at these meetings, especially cooking classes, and the discussions have helped her build better relationships with her family and feel more comfortable living in the U.S.

“(Shirley) is so helpful to international women who came to America (for) the first time,” Woo said. “I can’t imagine WOW without Shirley.”

The Colberts’ international experience began just after they were married. They spent two years in Morocco where Craig Colbert was working with an agency to provide clean drinking water to rural communities.

Going to Morocco was included in his marriage proposal when they were still in Bible college in Columbia, South Carolina.

“He wanted to go to Morocco and find out what was needed and then come back and do his studies in community development,” Shirley Colbert said.

After the two years in Morocco, he wanted to pursue a degree in community development at MU. The initial plan was to return to Morocco after he earned his degree, but an American agency asked them to stay in Columbia and lead a Christian ministry.

They accepted on the condition that they would work only with international families.

“We have always believed God has called us to cross-cultural ministry,” Colbert said. “An agency asked us if we would do campus ministry and we said, ‘well if we could do international students, yes.’”

Colbert discovered the deep love for helping the international community after her own exposure to a new language and culture in Morocco.

“Those two years in Morocco changed me drastically,” she said. “I’m different today in international student ministry than I was before we went because I hadn’t struggled with any of that.”

International people do not need to change the essence of who they are in America, she said. Instead they should be vivid representatives of their cultures and just make small adjustments to live within the American culture.

“You can learn to accept people of different cultures because you realize we’re just different, we’re not right or wrong,” she said.

Colbert said she hopes to continue helping internationals understand the new and the strange by blending distinct cultures and being a loyal representative of God’s love.