The 125th anniversary of Labor Day dawns Monday on a Columbia and Boone County whose labor forces are at record highs and whose unemployment rates are at historic lows.

Columbia workers numbered 66,402 in July; Boone County’s total was 97,185 in July, according to the Bureau of Labor Statistics. Both the county and the city enjoyed an unemployment rate of 2.9%, below the 3.3% rate for the state of Missouri and the national rate of 3.7%. As of 2017, however, the unemployment rate for black residents in Columbia was higher, at 7.5%, according to the U.S. Census Bureau. 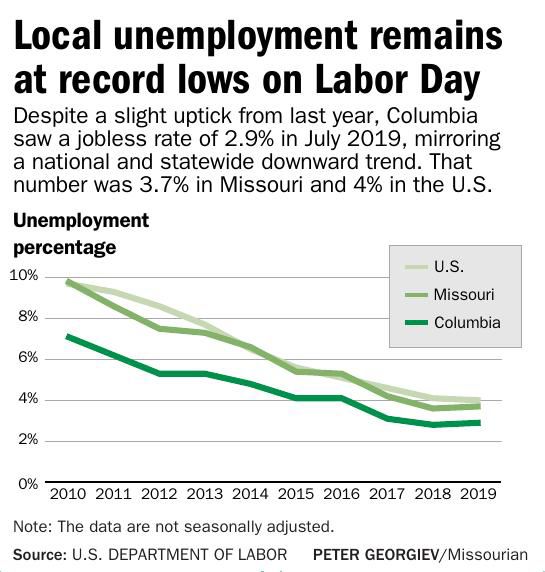 “One of the reasons we have almost the lowest unemployment rate in the state is that we’ve got the university, but we also have a growing community and a growing business community,” said Matt McCormick, president of the Columbia Chamber of Commerce.

He emphasized diversity in the type, size and services provided by the area’s numerous businesses, as well as a growing business community and a resulting increase in job creation as explanations for the robust job environment. Columbia and Boone County’s consistently low unemployment rates have proven resistant to economic downturns.

McCormick also noted that the growing healthcare, higher education and insurance resources, combined with other local amenities like a rich arts culture and a broad range of recreational activities, distinguish Columbia and Boone County from other parts of the state.

The University of Missouri remains the largest employer in Boone County by far, with 8,706 full-time benefited employees, according to a release by Regional Economic Development Inc. for 2017-18. Next came University Hospital and Clinics with 4,600 employees, Columbia Public Schools with 2,517 employees, Veterans United Home Loans with 1,742 employees and the city of Columbia with 1,487 employees.

An uptick in union membership

The percentage of Missouri workers represented by unions grew from 10.1% in 2017 to 10.6% in 2018, according to the Bureau of Labor Statistiics. The bureau distinguishes between individuals who are members of a labor union and workers who do not report a union affiliation but are covered by a union because of their job. Nationally, South Carolina has the lowest percentage of workers represented by unions at 3.6% in 2018, while Hawaii has the highest at 24.3%.

Last year, Missouri voters soundly rejected Proposition A, blocking legislation that would have prohibited unions from forcing workers to pay membership dues. The ballot measure was defeated by a vote of 939,973 to 453,283, or about 67%, according to the Missouri Secretary of State.

Recently, the University of Missouri’s Coalition of Graduate Workers, an organization advocating for the unionization of the university’s graduate student workers, has been in a legal battle against university lawyers to be recognized under a union. Michael Vierling, co-chair of the coalition, estimates there to be 200 members of CGW currently and around 2,500 graduate student workers at the University of Missouri. Vierling said that CGW has tried to get a complete list of current graduate student workers from the university but has been denied. Vierling emphasized that this year, CGW is focusing on organizing and boosting membership, citing their recent triumphs in Missouri courts.

“We’ve been pretty optimistic this whole time that we would be recognized as workers, and we have been continually upheld in this belief,” Vierling said.

An appeals court ruled last month that graduate student workers are employees and are therefore entitled to collective bargaining rights. The Western District Court of Appeals ruled Tuesday that it will not allow the university’s appeal to be reheard or transferred to the Missouri Supreme Court, said Christian Basi, a UM System spokesperson. The refusals allow the university to file a request directly with the Missouri Supreme Court asking it to hear the case, Basi said.

As of July 2019, Missouri’s unemployment rate was 3.3%. Dunklin and Pemiscot counties had the highest unemployment rate (not seasonally adjusted) at 6.7%, and Livingston County had the lowest at 2.6%, according to the Bureau of Labor Statistics.

Black and jobless: The distressing unemployment gap in Columbia

In Columbia, the gap in unemployment rates for the black and white populations is a concerning part of a the cycle of poverty and class inequality. Breaking that cycle starts with education, but for some, finding the window of opportunity from education has come later in life.