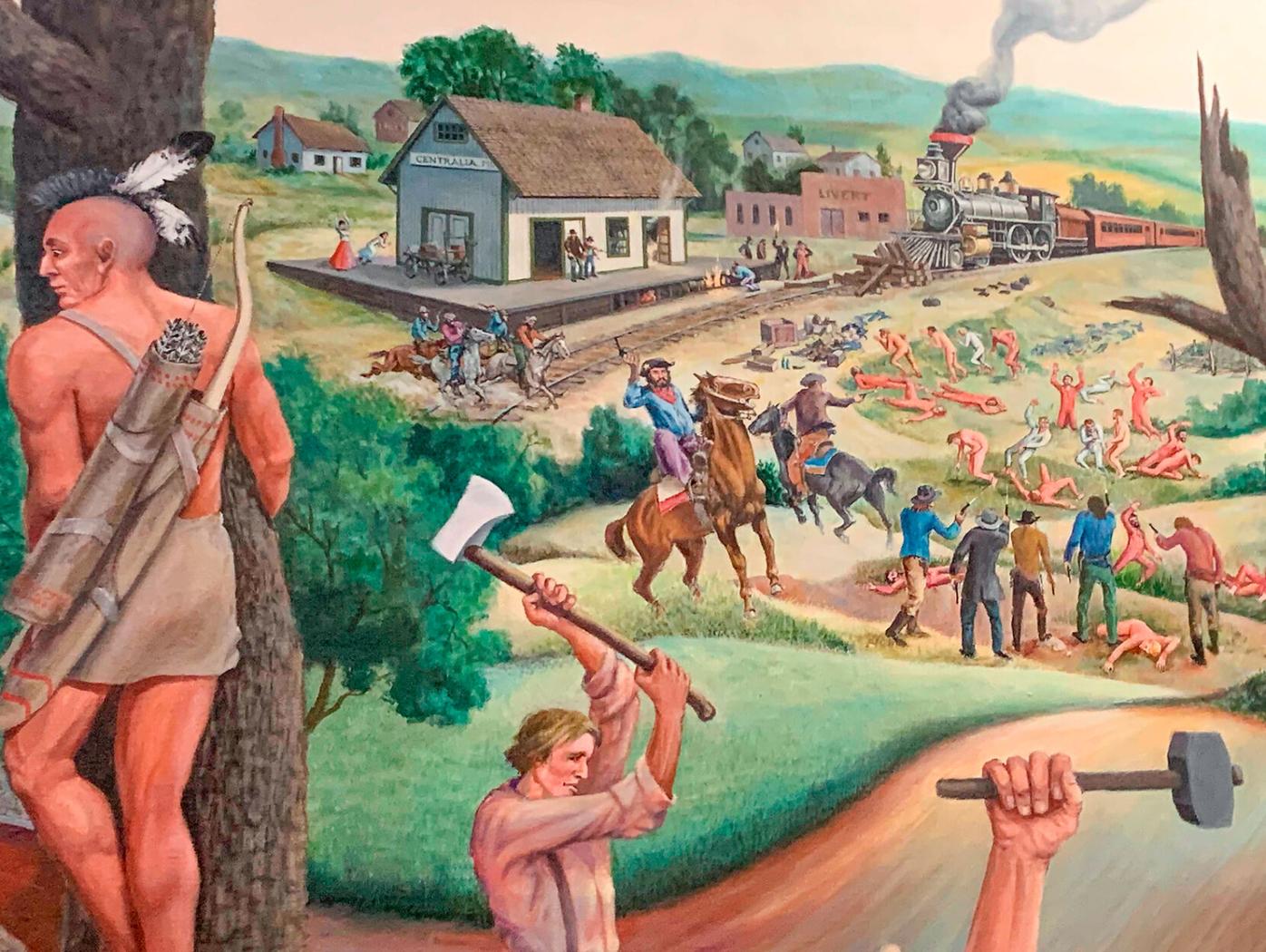 Details of a mural in the stairwell of the Boone County Courthouse on Tuesday in Columbia.

A variety of scenes are depicted in a mural hanging in the stairwell of the Boone County Courthouse.

A mural sits in the stairwell of the Boone County Courthouse on Tuesday in Columbia. 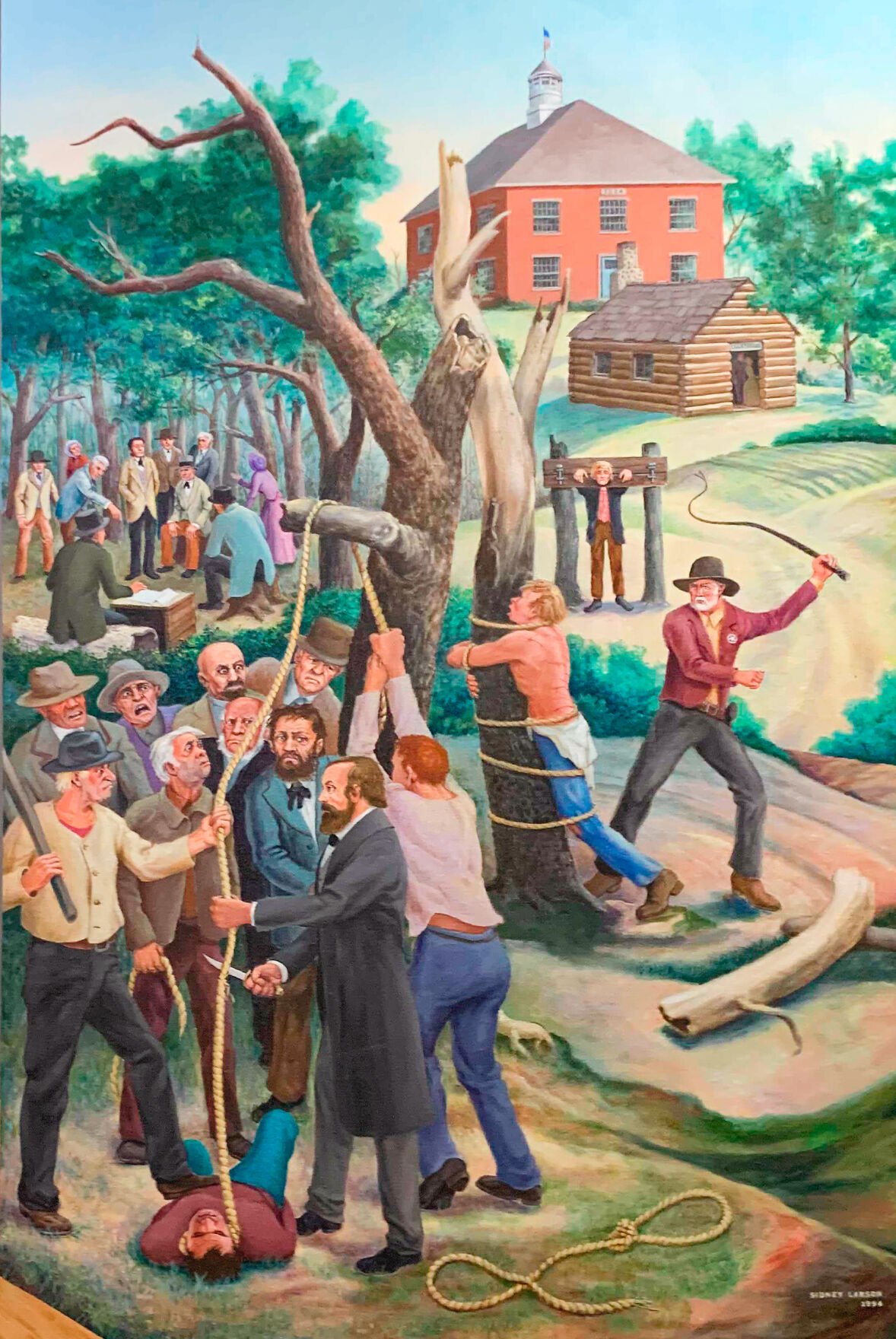 An angry crowd gathers in a scene from a mural hanging in the stairwell of the Boone County Courthouse on Tuesday in Columbia.

Details of a mural in the stairwell of the Boone County Courthouse on Tuesday in Columbia.

A variety of scenes are depicted in a mural hanging in the stairwell of the Boone County Courthouse.

A mural sits in the stairwell of the Boone County Courthouse on Tuesday in Columbia.

An angry crowd gathers in a scene from a mural hanging in the stairwell of the Boone County Courthouse on Tuesday in Columbia.

Boone County commissioners are seeking public input on whether to remove two murals that hang in the stairwell of the Boone County Courthouse.

Depicting numerous scenes from the county’s history, the murals were designed and painted by Sidney Larson in 1994.

Gary Oxenhandler and Rusty Antel, two members of the Boone County Bar Association, have requested the artwork be removed. The two lawyers say the paintings have been “personally and professionally upsetting” — citing their depictions of a hanging and the whipping of an individual by a law enforcement officer.

A plaque hanging in the courthouse next to the mural describes that scene as “1825 — Early justice: Walter Maxey is punished for stealing a heifer. He received 39 strokes, plus time in the pillory and a $12 fine.”

The request comes as communities large and small across the nation are evaluating historical statues and murals in the context of present day values.

Presiding Boone County Commissioner Dan Atwill said the details of the potential removal are being evaluated.

In a letter shared with Boone County Bar members and the commissioners, Oxenhandler and Antel say the painting doesn’t have a place in “Boone County’s home of justice, in our courthouse.”

The murals depict multiple scenes from Columbia’s history, including when in 1864, Southern guerrillas burned property and terrorized and murdered Union loyalists, according to a plaque that accompanies the paintings. The same painting shows how “Bloody Bill Anderson led the Centralia Massacre in which guerrillas robbed and terrorized citizens and killed unarmed Union soldiers.”

In the mural that hangs in the first floor stairwell, straight back from the main entrance, a Native American man stands up in a tree while Bill Callahan, hunter and “Indian fighter,” points a gun up at the man.

In the same mural, three shirtless Black men chained by their ankles carry a plank. The plaque adjacent to the mural reads, “Freed slave John B. Lange became a successful entrepreneur. A plank road to Providence is constructed.”

The second floor Larson mural depicts Dr. William Jewell welcoming his inscribed marble plaque and the courthouse bell in 1847. The marble is being carried by two shirtless Black men and reads, “Oh! Justice, when expelled from other habitations, make thy dwelling place.”

Antel is an attorney practicing at Walther, Antel & Stamper in Columbia. He says the murals depict extrajudicial punishment that is not allowed today and can intimidate people who visit the courthouse and may already be afraid of the court system.

“For people who are there in criminal cases, who typically are people of color and have public defenders, (when) there’s just a whole mistrust of the entire system, this just makes it worse — it just amplifies it. We’ve heard a lot from the public defenders, that, indeed, their clients are really bothered by it,” said Antel.

Antel said he and Oxenhandler received about 70 responses from fellow Boone County lawyers who support removing the murals.

“I think they are tremendously valuable in many ways, both as art and as history, and their continued display in the courthouse is likely to improve, not damage, how the legal system shapes our civilization into the future,” Powell said.

Powell is an attorney practicing at Smith Lewis in Columbia. He says the murals are valuable for those who work in the administration of justice.

“If people in the courthouse fail in their job to produce justice, things can go terribly, terribly wrong. That’s what I believe Sid Larson was portraying, by choosing to include the images that are being objected to,” Powell said.

Powell said he objects to art being politicized: “Having artwork being pressed into service for any political purpose, I think, is wrong. Across the board.”

State statute designates the county commissioners as custodians of all county property. Therefore, the fate of the murals lies solely in the hands of the three Boone County Commissioners: Atwill, Justin Aldred and Janet Thompson.

“We would welcome public input on the issue,” Atwill said.

Aldred said the commission hopes to hold public comment on the topic in late September.

In a lengthy description of his work on the murals included in the commission’s March 30, 1995, minutes, Larson included these comments about the murals:

“Symbolically represented are the first 75 years in the life of this area. As a social history painter, I can include only a few subjects and vignettes (from the early 1800’s to 1892). However, I did paint over 200 figures, including, 11 horses, 2 dogs, 40 plus buildings, 3 seasons, both day and night, a boat, a steamboat, horse and buggy, a train with steam engine, the first resident homes for Stephens College and Christian College (now Columbia College), a tavern/post office, a bank and the bank robber, a merchant, a church, stores, 4 homes, a courthouse, a schoolhouse, an outhouse, a stockade and an Indian, also a hunter, slaves, a teacher, a preacher, a pioneer, kids, a woodcutter, a political convention with plenty of politicians and four actual portraits (Senator Thomas Hart Benton, James Sidney Rollins, Dr. William Jewell, and Bloody Bill Anderson). I added a blacksmith, a bloody massacre, and the county’s first wedding.”

The city and the county have enough serious issues to deal with without wasting time on trivia like this.