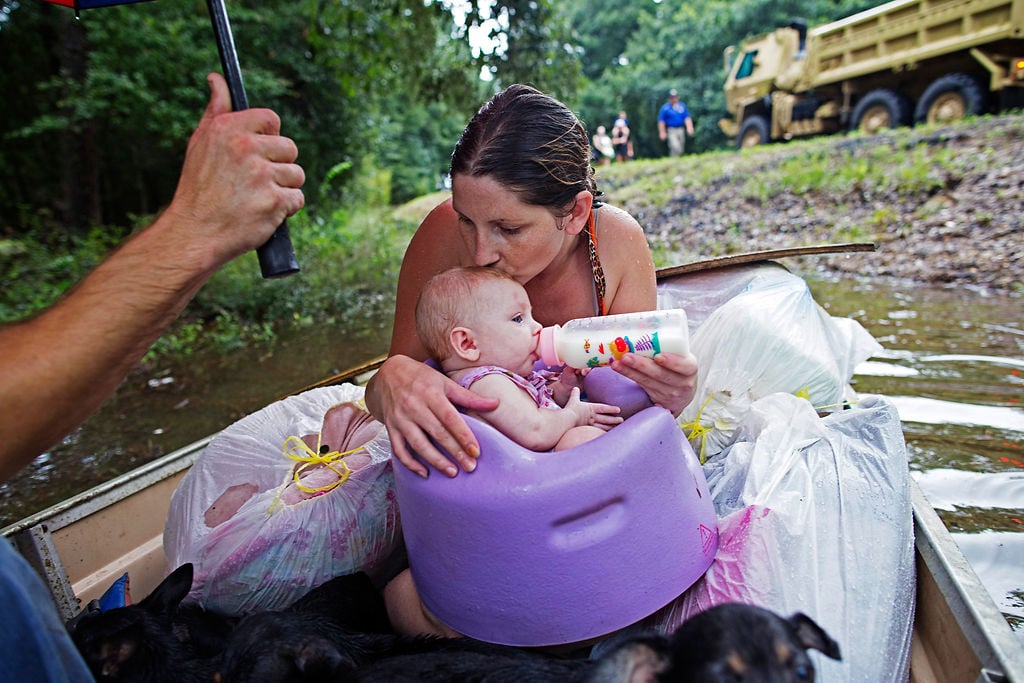 Danielle Blount kisses her 3-month-old baby Ember as she feeds her while they wait to be evacuated near Walker, Louisiana, after heavy rains inundated the region, Sunday. 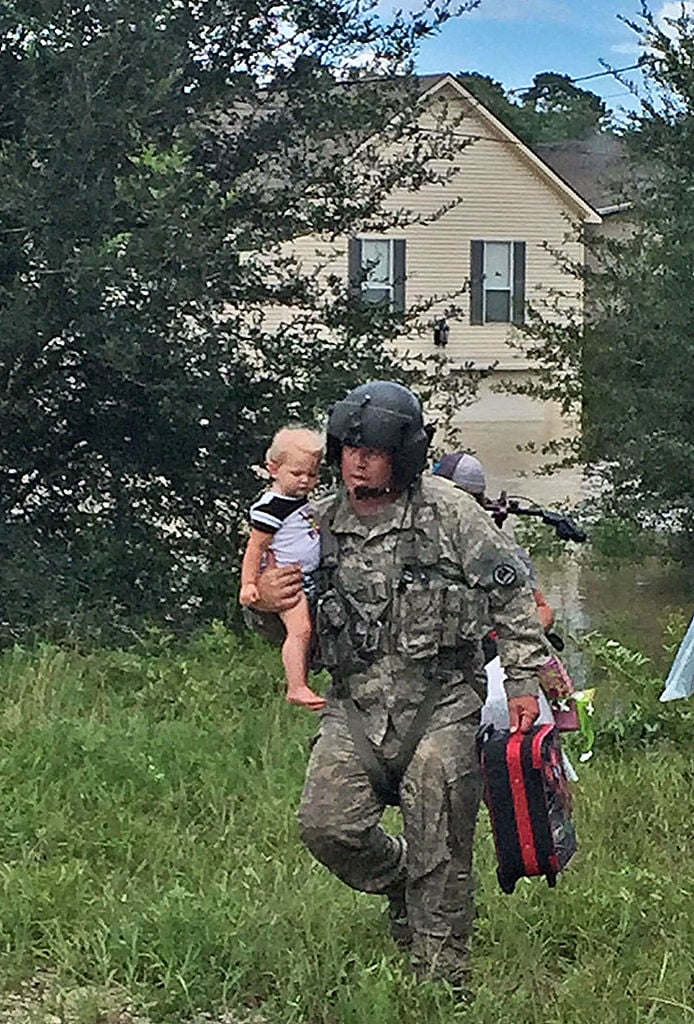 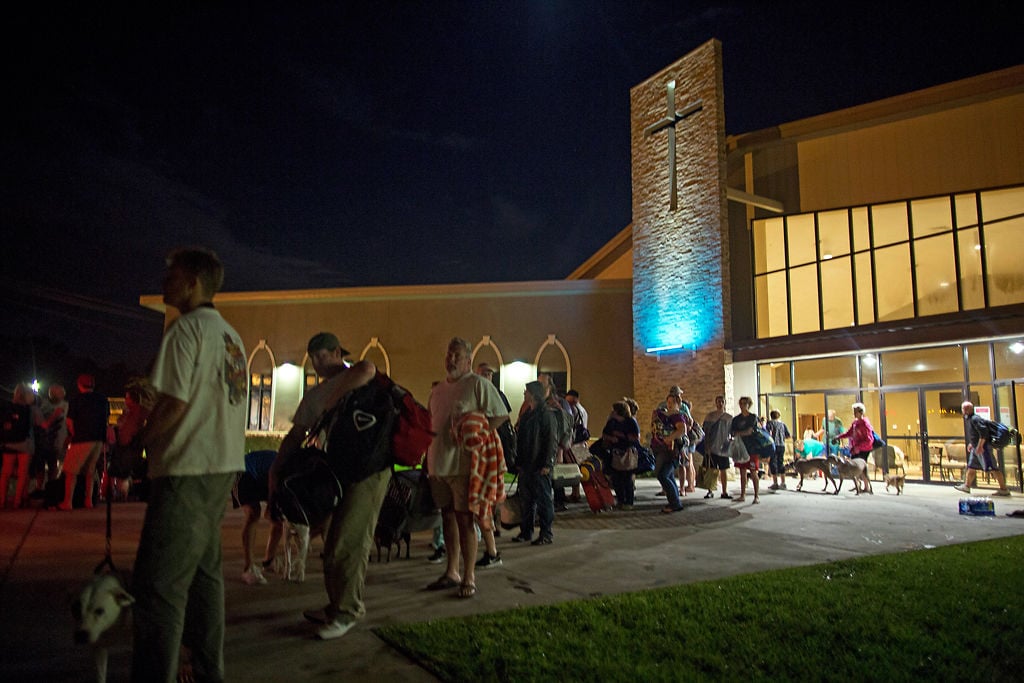 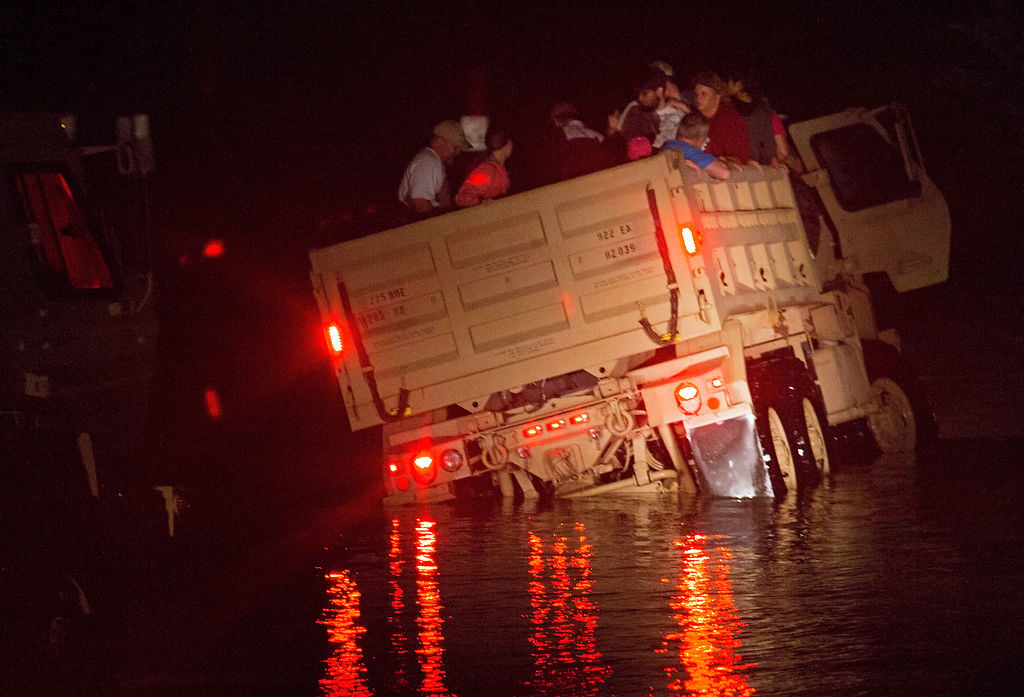 A Louisiana Army National Guard dump truck loaded with flood victims rescued from the Hebron Baptist Church in Denham Springs, Louisiana, tilts after driving slightly off the road on Sunday. The truck was able to back up and continue to safety. About 200 people had been taken to the church by the fire department, then became stranded as flood waters continued to rise.

Danielle Blount kisses her 3-month-old baby Ember as she feeds her while they wait to be evacuated near Walker, Louisiana, after heavy rains inundated the region, Sunday.

A Louisiana Army National Guard dump truck loaded with flood victims rescued from the Hebron Baptist Church in Denham Springs, Louisiana, tilts after driving slightly off the road on Sunday. The truck was able to back up and continue to safety. About 200 people had been taken to the church by the fire department, then became stranded as flood waters continued to rise.

*An earlier version of this article misspelled the name of the church volunteers are staying in.

COLUMBIA — Floodwaters had receded in Walker, Louisiana, but signs of disaster remained. Residents piled picture frames, furniture and the damaged contents of their homes and businesses on their front lawns for trash pick-up. Abandoned vehicles cluttered roadways, and some cars stood on end.

In a world turned upside down, John Mathews and his team of Red Cross volunteers delivered the normal: hot meals and clean-up kits.

Mathews, of Mexico, Missouri, along with Ted Barlag of Columbia and two other Red Cross volunteers from the area, left Monday morning to help with flood relief in southern Louisiana.

They arrived in Baton Rouge on Tuesday afternoon with two emergency response vehicles. These red-and-white vehicles resemble ambulances with a window on the side, much like a food truck.

The volunteers delivered meals and clean-up kits that consist of a mop, bucket, bleachand sponge.

The American Red Cross called the Louisiana flooding the largest U.S. disaster since Hurricane Sandy. Several more local volunteers are on standby, and more than 1,000 Red Cross volunteers nationwide were on the ground in Louisiana on Friday.

At least 13 people have died and an estimated 40,000 homes have been damaged since flooding began. The Federal Emergency Management Agency on Aug. 14 released a Major Disaster Declaration for 20 parishes, including Livingston Parish where Walker and some of the hardest hit communities are located.

The local volunteers were staying at the *Broadmoor Methodist Church in Baton Rouge, where the Red Cross has set up one of three staff shelters with 150 to 200 cots each, all for volunteers. Mathews and his team travel to Walker each day.

"We can drive 30 to 40 minutes in steady traffic, and never see anything that's normal," Mathews said. "It breaks your heart to see someone's entire life has been thrown out on the front yard.”

Communities in the area lacked electricity, gas and water, and telephone service was spotty.

Although the job of Mathews and his team is to hand out meals, finding food for themselves has proved difficult. The local McDonald's, along with most restaurants and grocery stores, flooded and had to close its doors. The volunteers have to drive five to six miles to find a meal. Residents of Walker face the same problem.

"They have to leave the area to eat or rely on us to bring the food in to them," Mathews said. Home-bound residents need the meals the most. Many lost their cars in the flooding or fear looting and are staying home to guard their property.

On Friday, the volunteers began serving two meals a day instead of one, thanks to a partnership with a local Louisiana organization that prepared the food and the volunteers distributed it.

They served about 275 meals and gave out over 500 quarts of water on Thursday.

"If there are 15 trucks that are serving that many people, then we’re really making an impact,” Mathews said.

Mathews has served with the American Red Cross for over 35 years. He has responded to four other natural disasters, including flooding in Louisiana, St. Louis and Houston, and forest fires in California. He described the flood response as "bordering on Hurricane Sandy; well above Hurricane Katrina levels."

Both Mathews and David Griffith, executive director of the Central & Northern Missouri Red Cross Chapter, said the best way to help is to make a financial donation to the Red Cross. The organization has no way to transport or store clothing or food donations.

You can donate to the Louisiana flood relief by visiting redcross.org, calling 1-800-RED Cross or texting the word LAFLOODS to 90999 to make a $10 donation.

Chrissy Edwards, who attended high school in Ashland, lost her home, her car, and most of her possessions in the Louisiana flooding. A benefit will be held Sunday at Rose Music Hall to help her and her two children recover.