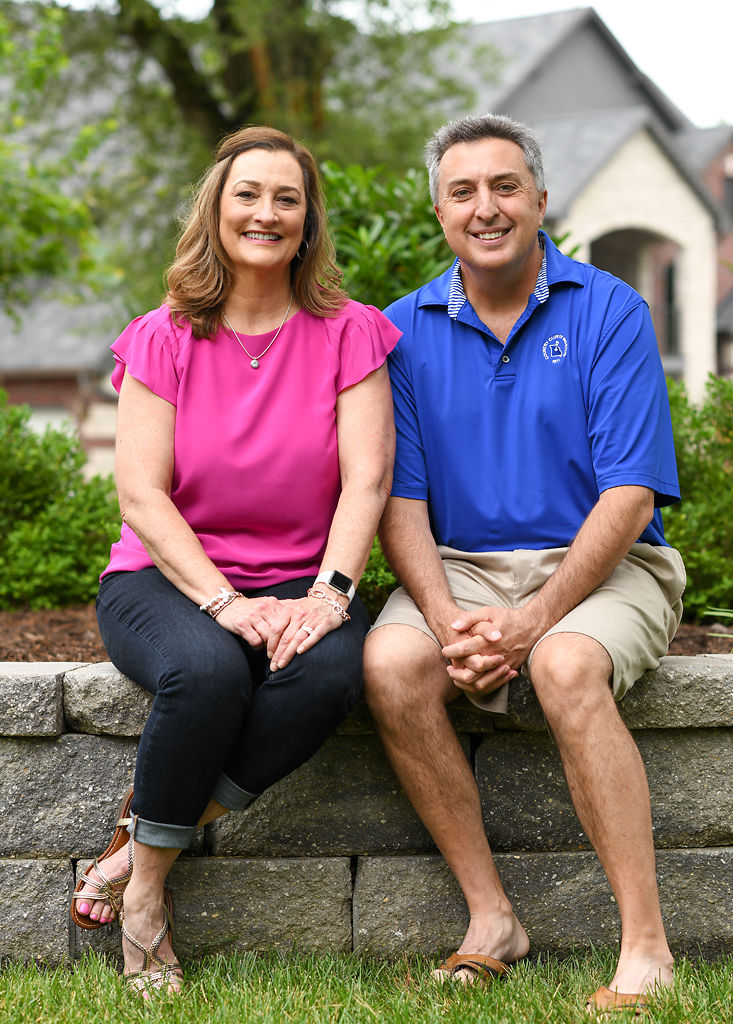 Chris Gervino, right, and Gina Gervino pose for a portrait at their home in Columbia on Monday. Chris Gervino is retiring after 20 years with KOMU/NBC. 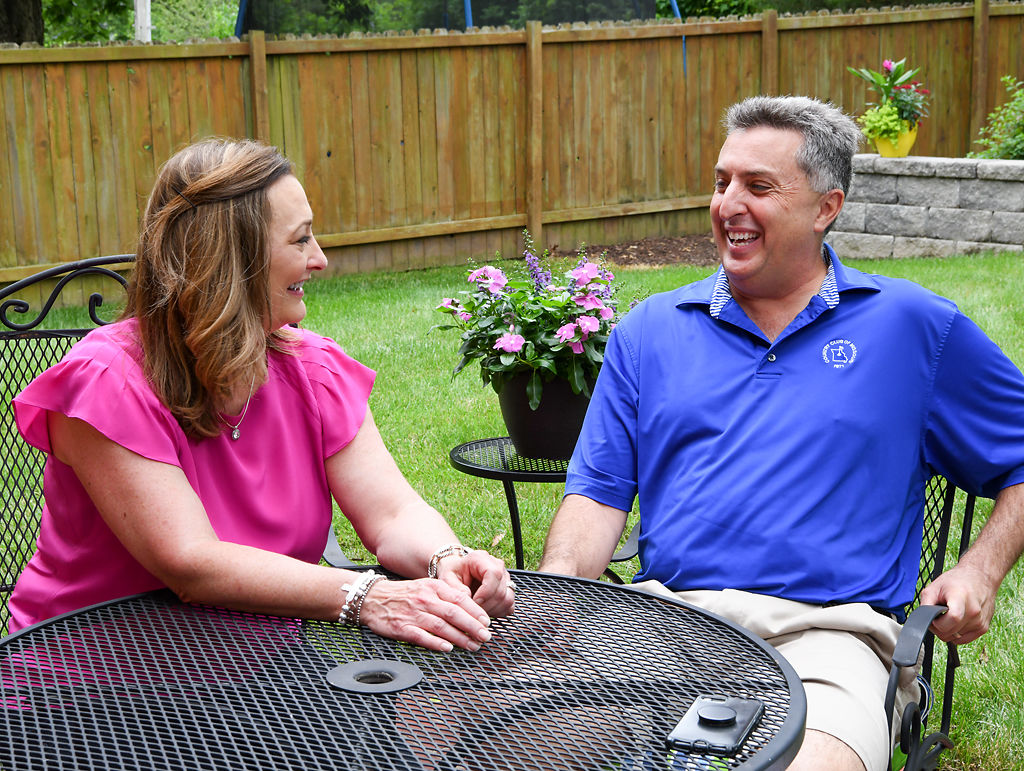 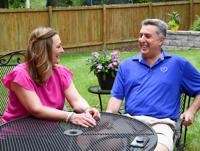 Chris Gervino, right, and Gina Gervino reflect on their marriage and careers at their home in Columbia. The couple have been married for six years and look forward to spending more time together after Chris retires from KOMU on Thursday. 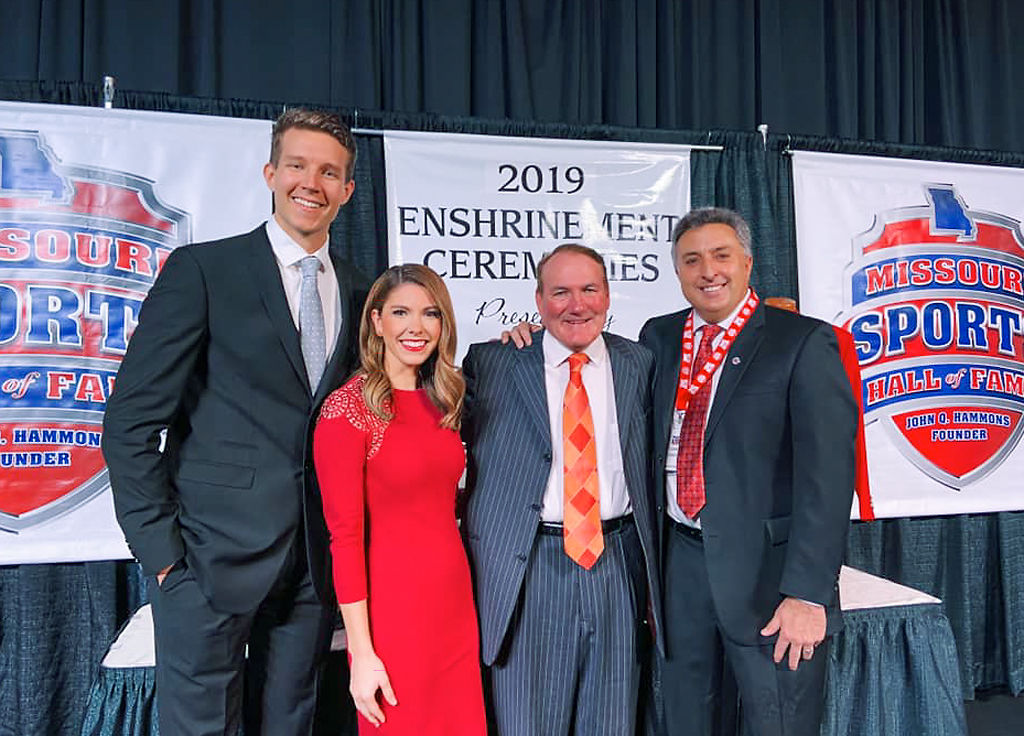 From left, Kenton Gewecke, Emily Spain, Jim Riek and Chris Gervino were together in November for the Missouri Sports Hall of Fame induction ceremony. 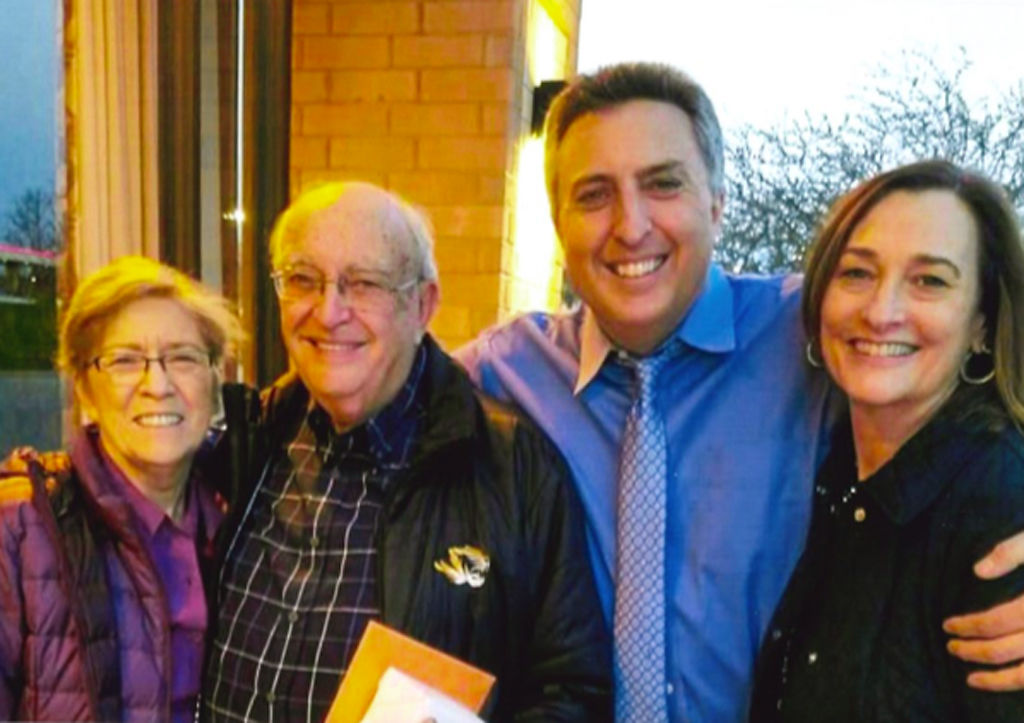 Chris Gervino with his wife and parents. After retiring he said he hopes to spend more time with family. 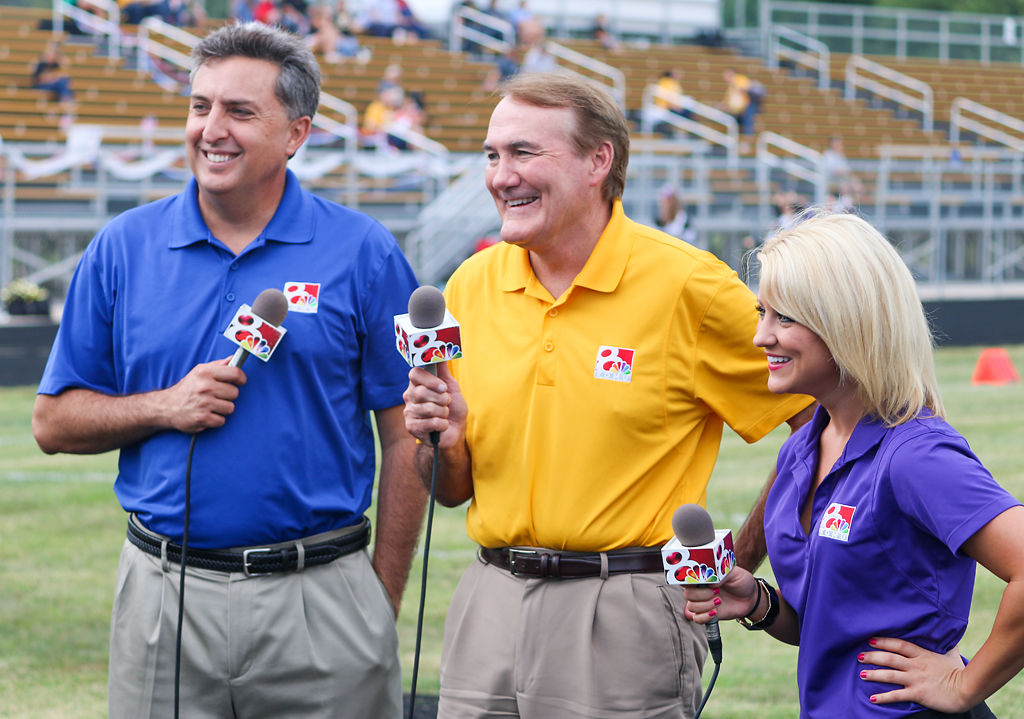 An earlier version of this story stated that Gervino has anchored his Sunday night Sports Xtra shows from home during the pandemic. All of the shows have been produced in the KOMU studio.

During his 20 years with KOMU/NBC, Chris Gervino has followed three head coaches, two Cotton Bowl victories, a No. 1 ranking and a change in conference while covering Missouri Tiger football.

In basketball, he has watched two runs to the Elite Eight, two conference tournament championships and five head coaches.

As KOMU sports director since 2000 and a radio-TV sportscaster for at least another decade, Gervino has had a front row seat for most of Missouri’s athletic achievements.

That career is now coming to a close. Gervino, 54, will officially retire Thursday after the sportscast on KOMU News at Ten. His last “Sports Xtra with Chris Gervino” for the station aired Sunday.

He will continue to work with the Tiger Radio Network, serving as color analyst for Missouri Tiger basketball and sideline reporter for football. But Gervino says he is most looking forward to spending time with his wife, Gina.

“We’re lucky that we get to retire together because she will also be retiring from her job this year,” he said. “We’re looking forward to getting a lot more time with each other.”

Gervino’s dedication to sports has made him not only a household name in Columbia but one of the major voices of Missouri Tiger athletics.

He says he got his start when Missouri’s former athletic director, Joe Castiglione, hired him to fill a position as public address announcer for Missouri Tiger basketball.

Gervino and Castiglione, athletic director from 1994 to 1998 before joining the University of Oklahoma, have known each other since Gervino was an MU student in the School of Journalism, where he graduated in 1988.

“He was an Energizer bunny,” Castiglione said. “I don’t know where he got all his energy.”

At KOMU, Gervino has been sports director, anchored weeknight sportcasts and hosted “Sports Xtra with Chris Gervino” at 10:30 every Sunday night.

He has been football sideline reporter for the Tiger Radio Network since 1992 and served as the play-by-play commentator for the Missouri Tiger basketball team from 2000 to 2014 before filling in as color analyst since 2017.

Before heading to KOMU, he was sports director at KMIZ/ABC and KFRU/1400 Columbia. Last year, he was inducted into the Missouri Sports Hall of Fame.

“This is a guy who truly loves his job,” Reeves said. “You know he’s gonna be great every single time he puts on a headset. It will be a big loss for us.”

Gervino’s impact on students who have worked at KOMU over the years is another defining aspect of his character, Reeves said.

“You have a completely new set of students every year, and you hope to make a difference in their lives,” he said. “Chris has made a difference for a lot of our students over the last 20 years.”

During their time together, Reeves and Gervino shared a number of highlights in Missouri Tiger football. Among Reeves’ favorite memories is hosting a two-hour pregame show prior to the 2007 Border War against Kansas in Kansas City, as well as covering two Cotton Bowls.

“I’m disappointed that he’s leaving because of how great he has been for us,” Reeves said. “But I know him well enough that I understand why he’s retiring. He deserves it.”

According to News Director Steve Ackermann, KOMU is sorting through several dozen applicants to replace Gervino as sports director. Meanwhile, news anchor Jim Riek will pinch-hit on the Sunday night “Sports Xtra” show after this week and MU students will fill in with sports on weeknights.

Gervino said his favorite moment while covering basketball was in 2002 when No. 12-seeded Missouri, led by players such as Kareem Rush and Clarence Gilbert, went to the Elite Eight in the NCAA tournament.

The Tigers’ biggest victory was an 83-67 win against No. 4-seeded Ohio State in the second round, despite being the underdogs.

But the standout memory for Gervino, having grown up in Oklahoma, was when the Sooners and Tigers, both Big 12 schools at the time, played in the Sweet 16 on the same night against Arizona and UCLA, two Pac-10 (later Pac-12) schools in a Pac-10 city: San Jose, California.

Missouri later lost to Oklahoma in the Elite Eight 81-75. The team is still the only No. 12 seed to advance to the Elite Eight in NCAA men’s basketball tournament history.

“Didn’t have a great free-throw shooting night,” Gervino said with a laugh. “But had they beaten Oklahoma, of all teams, they would have gone to the Final Four, something that has eluded them to this day.”

Although he was just a fill-in for the broadcast team at the time, another highlight was the 1994 season where Missouri went undefeated in conference play to win the then-Big Eight regular season title.

“That was under Norm Stewart before I did the TV play-by-play,” Gervino said.

During 29 seasons with the football program, he observed plenty of highs, such as the 2007 season where Missouri was ranked No. 1 for the first time since 1960 and won the Cotton Bowl over Arkansas.

There were also plenty of lows, including the “fifth-down” game against Colorado in 1990 and the “flea kicker” game against Nebraska in 1997.

“Those teams all barely beat Missouri on the most miraculous of plays, and all of them went on to win the national title,” Gervino said. “They obviously don’t do that if they don’t have those crazy wins over Missouri.”

From 2006 to 2008, Gervino was the radio play-by-play announcer for the Kansas City Brigade of the Arena Football League before the team folded after the 2008 season.

“Back then, that was the height of the Arena Football League,” Gervino said. “The games were televised nationally, and they were playing in a lot of the big arenas throughout the country. The games were quick, fast-paced and a lot of scoring. It was a nice complement to all the TV work I was doing.”

One of the notable players for the Brigade was former Dallas Cowboys quarterback Quincy Carter, who became the starting quarterback after Troy Aikman retired following the 2000 season.

“It just got too big, too fast,” Gervino said. “They tried to do a lot maybe too quickly, but those three years were really fun.”

It is already a sunny, humid Thursday afternoon in early June when Gervino rolls into Panera Bread on Providence Road at 1:28 p.m. in his white Subaru Legacy.

Around the restaurant are reminders of the pandemic. Signs on the floor remind customers to stand 6 feet apart, employees wear masks and cashiers stand behind panes of plexiglass.

Gervino orders a Pepsi and sits down at one of the few tables still designated for customers in compliance with social distancing rules. Like everyone else, Gervino is adapting to the shifting situation.

“It’s been a bit different so far, but I’ve kind of enjoyed it,” he said. “It is the safest thing to do right now, so just have to do what you can since everyone is going through that.”

About an hour into the interview at Panera, a familiar face appears. Gervino’s eyes light up as he shakes hands with a man wearing a mask and a neck brace.

Freddie DeMarco, a self-proclaimed “superfan” of Missouri Tiger football and the former owner of Deja Vu comedy club, has been a fixture on the Faurot Field sidelines, but a bit longer than Gervino — 42 years.

DeMarco and Gervino have known each other for more than 30 years, and it shows. They start chatting about the possible impact of the virus crisis and the George Floyd protests on football recruiting. Comparisons to 2015, the year of the Concerned Student 1950 unrest, are tossed around.

After a few minutes of animated conversation, they say goodbye and part. Gervino needs to get back to work, so he climbs back into his Legacy to drive to the studio.

Soon, it will be for the last time.

Gervino started laying the foundation for life after sports broadcasting when he married for the first time at the age of 48.

“I had never even been engaged before,” he noted.

A mutual friend from the Country Club of Missouri introduced Gina and Chris to each other on the golf course. One thing led to another, and they wed in 2014.

“She has the looks and the brains in the family,” Gervino cracked.

Gervino grew up in Tulsa, Oklahoma, and went to MU. His wife grew up in Brownwood, Texas, and went to Texas A&M. The two schools have been major rivals for years — both teams played in the Big 12 and moved to the Southeastern Conference at the same time in 2013.

“Whenever they would play and we’d go to the game, I would wear a black shirt and put a Missouri pin on one side, and then a Texas A&M pin on the other,” Gina said. “That way I’m supporting both teams.”

She moved to Missouri in 2008 after living in Dallas for 15 years and plans to retire this year from her job as senior vice president of Columbia Insurance Group.

Getting the chance to spend more time together is one thing they are looking forward to.

“We’re lucky to be retiring together, getting the chance to slow down a bit and free up our schedules,” he said. “Her mother lives up here and my parents are here, so that allows us the chance to be there for them a little more.”

He’s also eager to play more golf, which he is still trying to get the hang of, bike and go for walks with his wife.

After 32 years, he said he’s surprised to find himself still living in Columbia but feels fortunate to have remained in one place.

“I’ve gotten to do what I love to do for 32 years and counting since I’m not done on the radio,” Gervino said. “It’s been a blessing.”

DARKOW: Sports retires, and so does Gervino