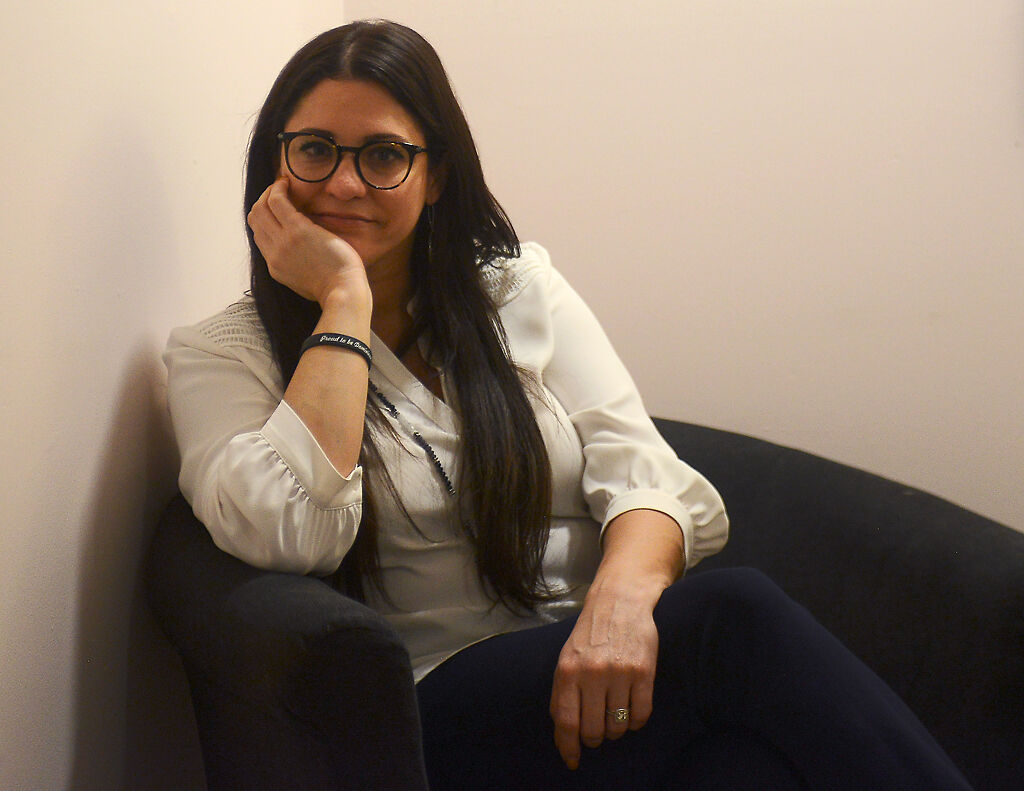 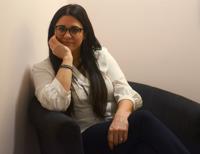 Elizabeth Herrera Eichenberger is the executive director of True North of Columbia. True North is the only emergency shelter service for victims and survivors of intimate partner and sexual violence in Boone County. Eichenberger hopes to change that by gaining community support to spread awareness of these services and eventually add more shelters around the county. 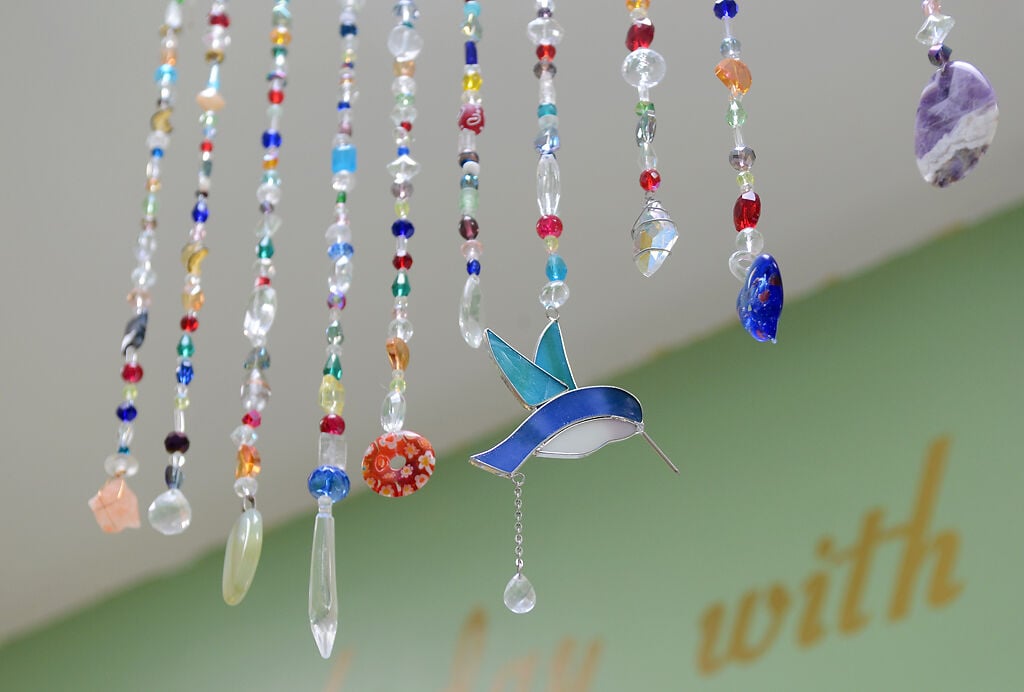 Colorful beads dangle from the ceiling inside the True North serenity room Thursday in Columbia. The room contains art from previous residents, acting as an inspiration and comfort for current residents who share similar experiences. 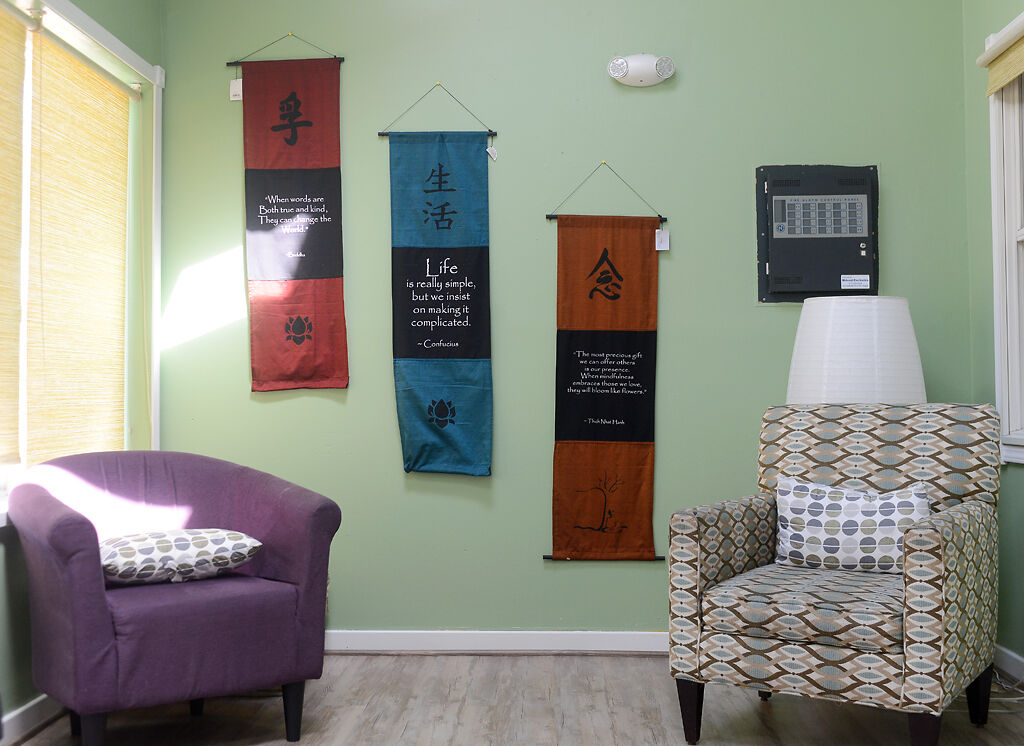 A quiet room sits empty inside the True North shelter Thursday in Columbia. The spiritual serenity room provides comfort to the residents of the shelter by allowing them to have a peaceful space to pray, meditate and worship.

Editor’s note: This is the second of two stories about intimate-partner violence and guns in Missouri. Read the first story here.

Janice Thompson, a domestic violence survivor and victim’s advocate in Springfield, wasn’t physically assaulted by her husband until they’d been married for seven years. Then he punched her in the face.

“It happens everywhere, and it’s not just a fist to the face,” Thompson said.

But the danger doesn’t necessarily make itself known abruptly.

Elizabeth Herrera Eichenberger, executive director of True North, said that’s why the public needs to understand the dynamics of abuse.

“We need to understand that these abusers develop throughout time this mechanism of power and control because they feel out of control themselves,” she said. “It’s a consistent pattern of behavior.”

Often, that looks like telling victims not to work or forcing them to cut off family and friends.

The reasons women stay — and women are disproportionately the victims, though anyone can be a victim — are extremely layered and complex and often rooted in the reality that abusers often do follow through on threats of violence that keep women trapped.

Whether it’s financial dependency, fear of losing custody of their children, fear of death, religious beliefs or having nowhere to go, the barriers faced by women trying to leave a violent relationship are many and often exist at the systemic level.

“Systems aren’t built to help survivors, unfortunately,” said Matthew Huffman, Public Affairs director for the Missouri Coalition Against Domestic and Sexual Violence. “There’s such a high burden of proof put on survivors to prove the violence and trauma that they experience to be able to actually get the safety and support and resources that they need.”

Research shows women are at the highest risk of being killed when they leave, and an abuser’s access to guns only increases that danger.

In Missouri, firearms are the most common weapon used by men to murder their current or former partner, according to the Violence Policy Center’s most recent report.

But the argument against restricting access to firearms in Missouri is always that they’ll get the gun anyway, Thompson said.

In recent years, Missouri lawmakers have continued to loosen the state’s gun restrictions, despite increases in gun death rates. Missouri has no state law on intimate partner violence and firearms that parallels federal law.

“There is no absolute. We’re never going to be able to legislate a stop to violence, but my point has always been this: Why are we making it easier?” Thompson said. “We need those roadblocks, and that’s just to give us a little more distance between our abuser and our escape.”

Experts across the nation have been making the same point for decades.

David Adams is the co-founder of Emerge —the nation’s first batterer intervention program.

In his testimony before the Joint Committee on Public Safety and Homeland Security in 2013, Adams said he interviewed 14 men who killed their intimate partners in Massachusetts to see if access to firearms played a role.

“Eleven of the 14 men who used a gun said that they would not have killed if the gun were not available,” Adams said. “Many serious abusers already have the motive to kill their intimate partner or ex-partner; let’s stop making it so easy for them to have the means to do so.”

Advocates across the state say there are potential solutions for minimizing the risk to victims, but first the narratives about guns and intimate partner violence have to change.

Where to find resources

“It really isn’t a conversation about gun rights and ownership,” Huffman said. “It’s people who have already been deemed dangerous, and so they shouldn’t have access to dangerous weapons.”

Research shows disrupting an abuser’s access to guns can save lives.

In states that kept guns away from people under active emergency protection orders — or ex parte orders — firearm intimate partner homicides declined 16%, according to a 2018 study by the American Journal of Epidemiology.

Though the laws vary by state, 22 states including Illinois, Texas and Wisconsin restrict access to firearms for people under active ex parte orders. Missouri does not prohibit people under active protection orders from possessing or purchasing firearms.

Abusers don’t come out of nowhere. There are certain predictive behaviors — or risk factors — associated with a greater likelihood of severe violence or death for victims.

For example, an abuser threatening to kill himself or someone else is a “big red flag,” Thompson said.

“The first incident of violence is not somebody pulling a gun out and going on a mass shooting spree,” she said. “There’s a history there, and it’s always there when we look back. ... There’s always those tell-tale signs.”

Springfield Police Chief Paul Williams said a red flag law “would add some teeth” and give law enforcement another tool when responding to domestic violence calls.

While the procedures and requirements vary across the country, 19 states and Washington, D.C., have enacted such laws to help prevent violence.

Intimate partner violence and gun violence are often related, which is why Huffman said prevention efforts need to address both.

“When we look specifically at gun violence, we aren’t able to get that same traction of seeing people make that connection that gun violence prevention is intimate partner homicide prevention,” Huffman said. “And largely in this state, we’re in a public health crisis of gun violence, and that’s not being recognized by a lot of policy makers.”

That’s why Rep. Tracy McCreery, D-St. Louis, would like to see the state adopt the federal standard on domestic violence and firearms — an effort McCreery has been involved in since 2016, she said.

In the past, McCreery proposed legislation similar to House Bill 473, which Ron Hicks, R-Dardenne Prairie, introduced this session. The bill mirrors federal law in prohibiting those convicted of domestic violence misdemeanors and those subject to protection orders from possessing a firearm. It awaits approval in the House, but its chances don’t look good with just two weeks left in the legislative session.

McCreery said supporters are still looking for ways to get it across the finish line.

Meanwhile, providing comprehensive services and resources for victims of intimate partner violence is crucial, and True North works to do just that, Herrera said.

Sometimes it’s hard for people to realize how dangerous their relationship might be, and apps like myPlan can help.

Tina Bloom, an associate professor of nursing at MU, and her team turned a computer-based program into a mobile app that helps victims assess the danger they’re in and provides resources and personalized safety-planning information.

“The thing about relationship violence is that there’s so much shame and fear and stigma and difficulty talking about it that the vast majority of women never call a hotline or a shelter,” Bloom previously told the Missourian.

The app provides victims with a more private route to get the help, resources and information they need.

For Thompson, more education on the intricacies of domestic violence in family courts, which victims often tell her is worse than criminal court, would go a long way.

“I would like to see a standard protocol when domestic violence is present that would require supervisors educated on the subject watching the situation,” she said.

“Whether it be access to our child, access to a gun, repeated trips to court, we’re making it harder for victims to escape and we’re making it easier for abusers to continue, and that has to change. That’s where we change this.”

Lost in the fight: As gun rights expand in Mo., domestic violence victims pay the price

Victims of intimate partner violence are being overlooked in the argument over gun rights, advocates say.

Across the state, Missouri also has a number of batterer intervention programs, including Hope Connections in Waynesville and Rolla, TMT Consulting in Columbia, RAVEN in St. Louis and Synergy Services in Parksville.

The programs teach abusers to take responsibility for perpetrating violence by helping them recognize destructive behaviors, understand the harm they’ve caused and find ways to stop being violent.

In a 2002 paper on abuse intervention, Adams wrote that battering is deliberate behavior abusers use to maintain control.

“Many batterers conduct some, if not most, of their nonfamilial relationships in a respectful manner, which indicates that they already know how to practice respectful treatment of others when they decide to,” he wrote.