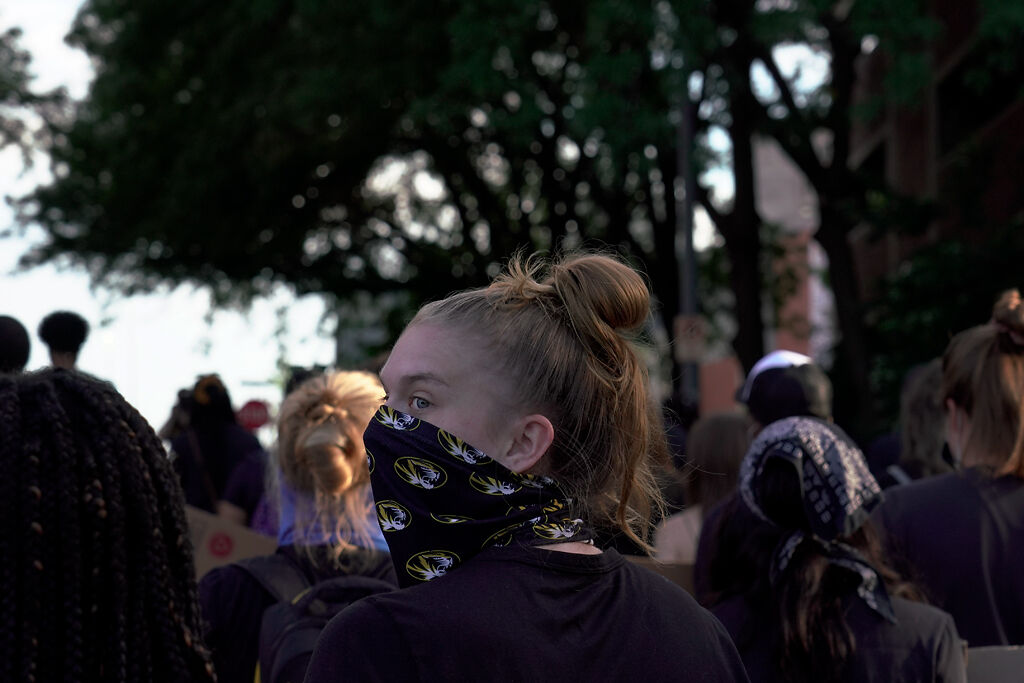 A marcher looks back down Tiger Avenue during the March with Mizzou protest Wednesday in Columbia. The protest comes amid racial tension brewing around the country ever since the killing of George Floyd in Minneapolis. 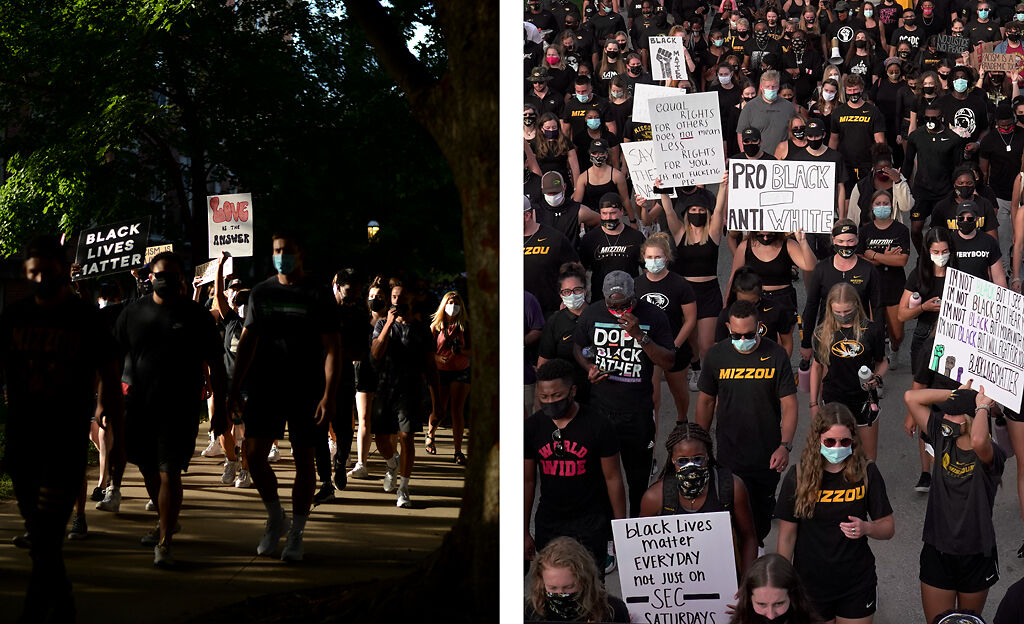 LEFT: Protesters march by Jesse Hall on MU’s campus Wednesday in Columbia. Many marchers were holding signs and screaming chants like “Black Lives Matter” and “No Justice, No Peace!” RIGHT: Protesters walk with their signs toward Memorial Stadium on Wednesday in Columbia. The marchers traveled through the tunnel underneath East Stadium Boulevard to reach the stadium. 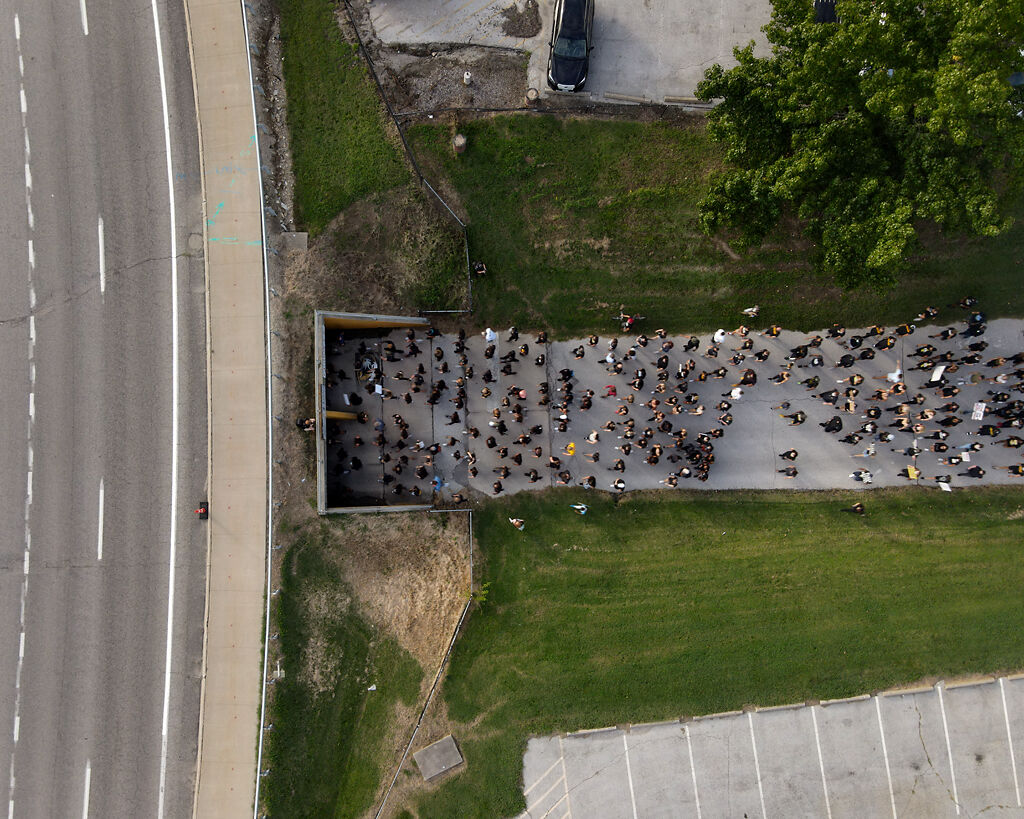 People march through the tunnel under East Stadium Boulevard toward Memorial Stadium during March with Mizzou on Wednesday in Columbia. March with Mizzou, a social justice march created by an group of Missouri athletes, began at MU's columns and ended at the football stadium. 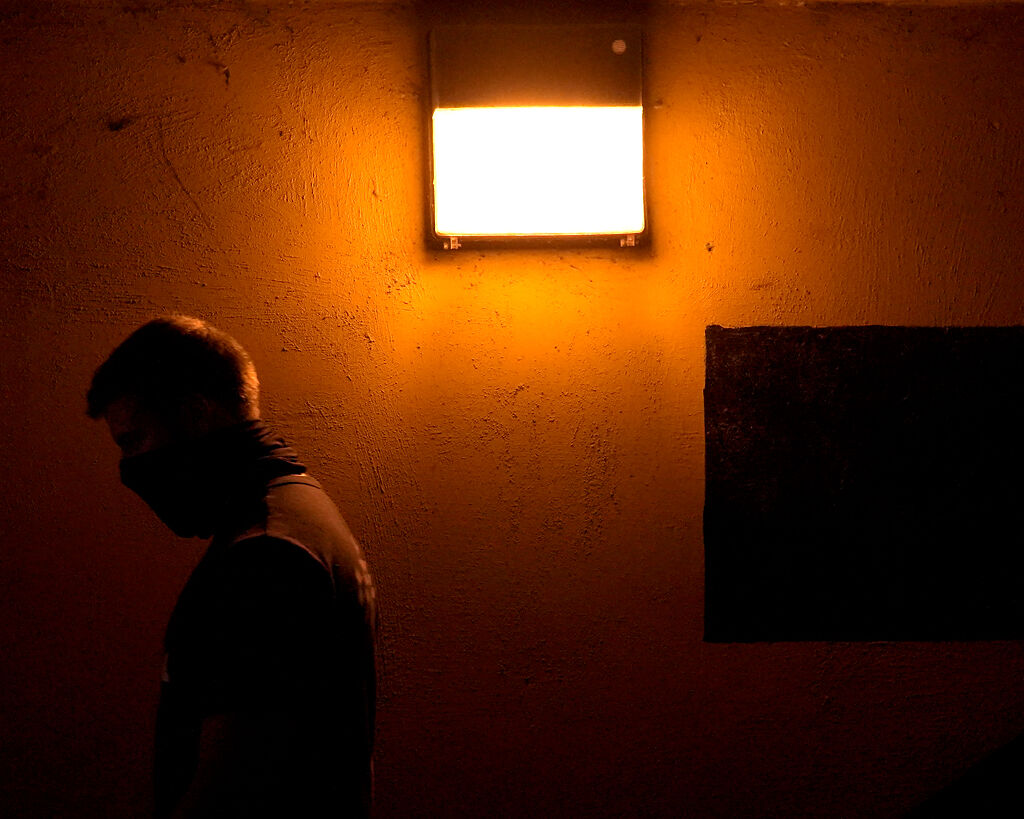 A protester walks through the tunnel under Stadium Boulevard towards Memorial Stadium during March with Mizzou on Wednesday in Columbia. MU's Black Student-Athlete Association hosted the march against racial injustice. 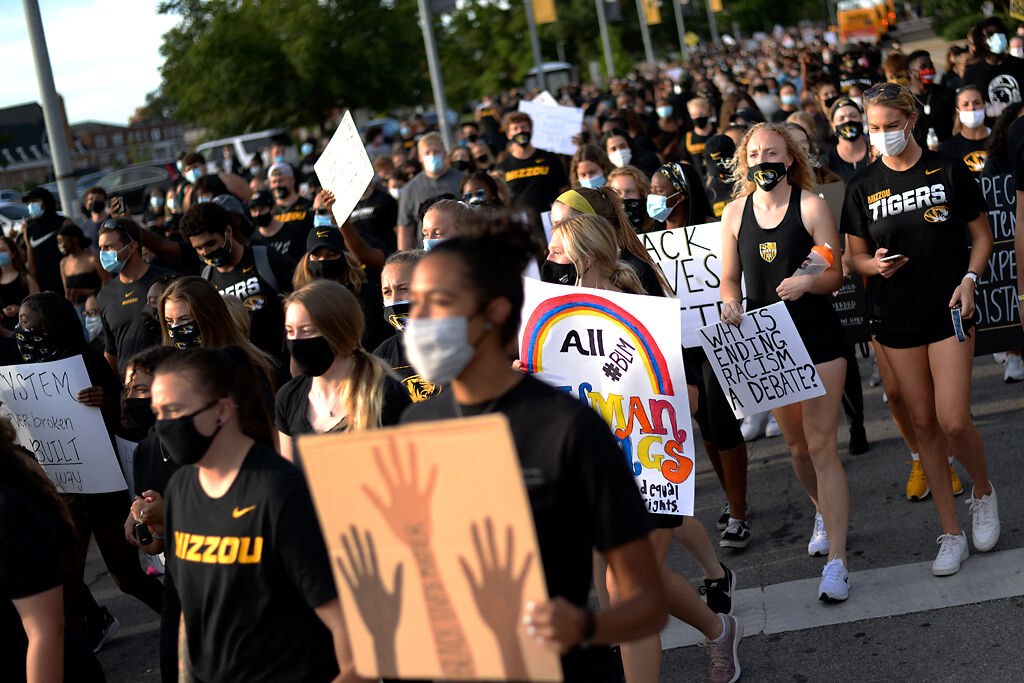 The March with Mizzou crowd walks toward Memorial Stadium on Wednesday in Columbia. The protest was in response to police brutality. 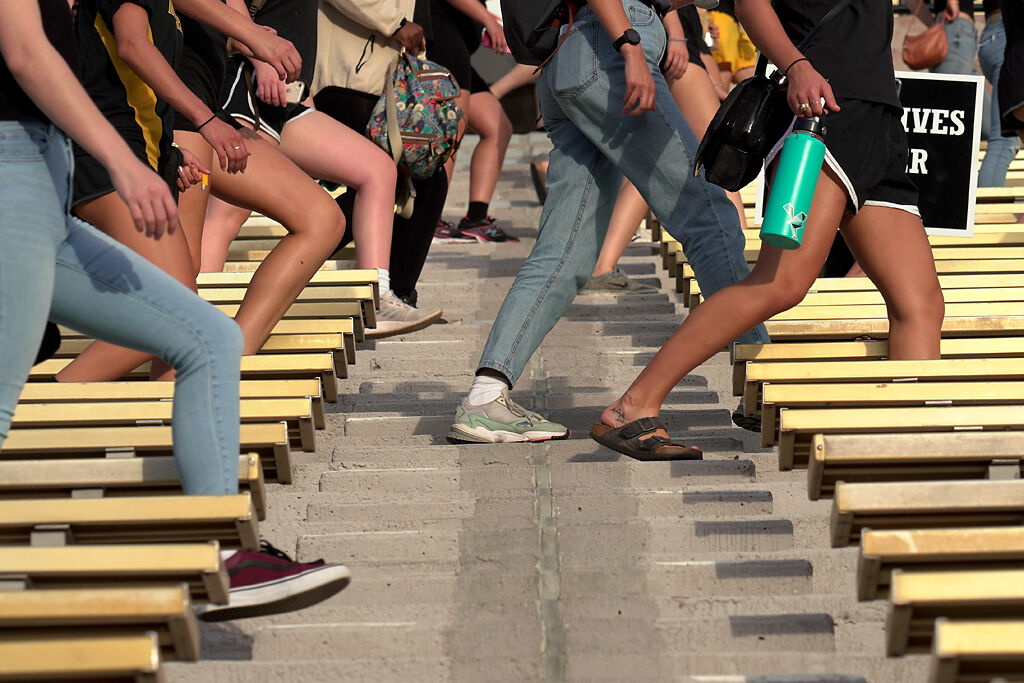 Protestors make their way to their seats in Memorial Stadium after the march Wednesday in Columbia. Protestors were seated according to social distancing standards. 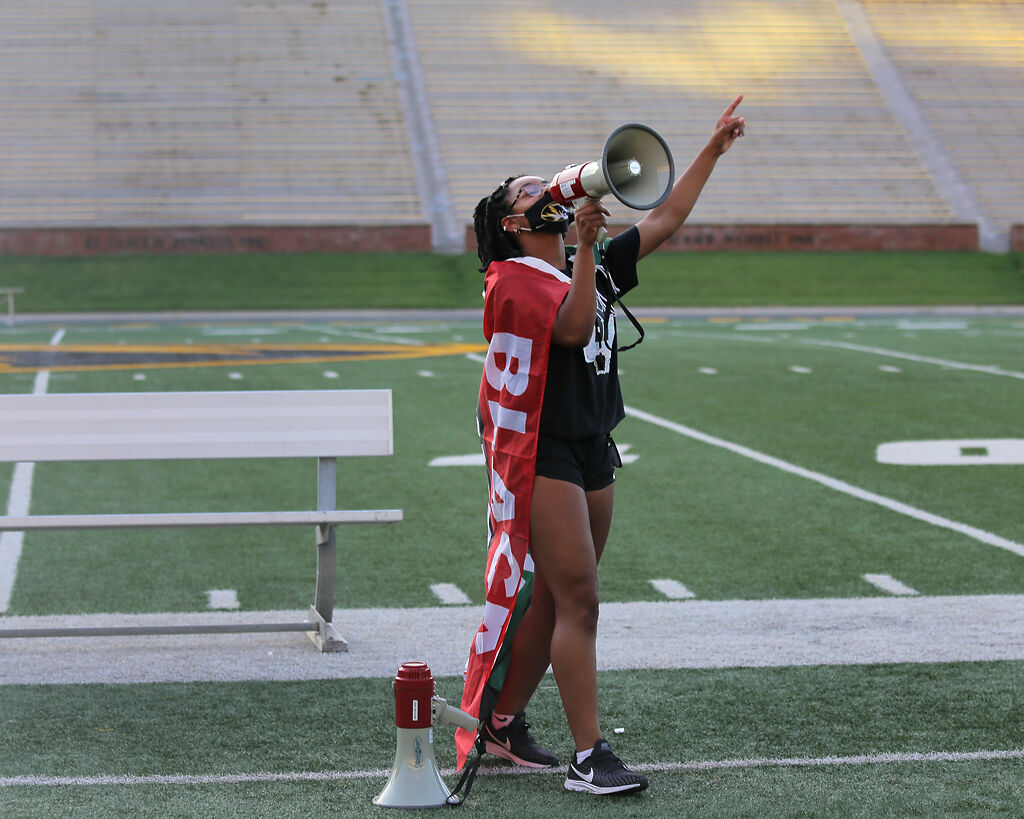 Missouri sophomore soccer player Eryka McIntyre addresses the crowd inside Memorial Stadium at the end of the March with Mizzou protest Wednesday in Columbia. McIntyre studies business and textile and apparel management at Missouri. 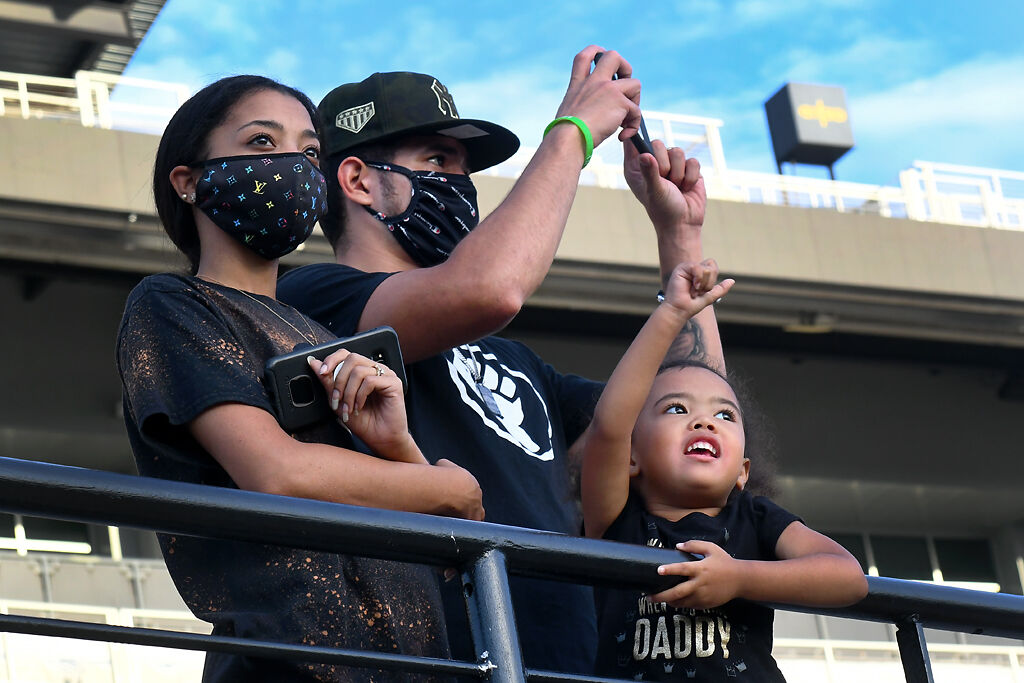 From left, Imari Perrigo, Dominic Perrigo and their daughter Darielle, 4, take a picture of event speakers Wednesday at March with Mizzou in Columbia. The family had never been to a walk like this. “This is such an important event for the community,” Imari said. 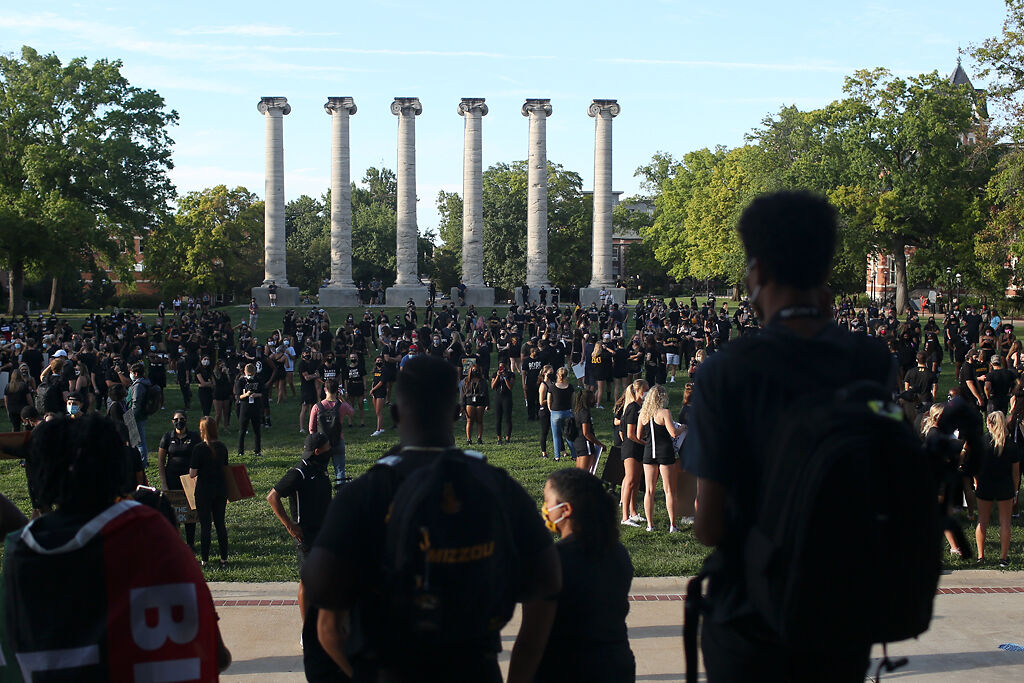 Leaders with MU’s Black Student Athletic Association stand on the steps of Jesse Hall as students gather for the March with Mizzou protest Wednesday on Francis Quadrangle in Columbia. The BSAA called for the march on Twitter on Aug. 31. 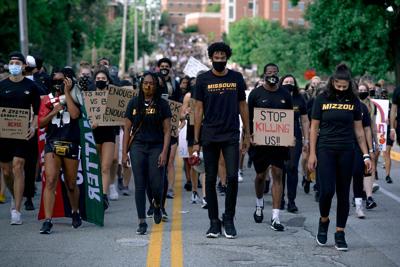 As hundreds crammed onto the south end of Francis Quadrangle on Wednesday evening, Cason Suggs was expressing his gratitude to the growing crowd of marchers.

“Thank you,” the Mizzou Black Student Athlete Association president, Suggs, said through a bullhorn. “It already means a lot.”

Suggs, a junior sprinter on MU’s track and field team, along with five other MBSAA officers, led a march from the MU Columns to Memorial Stadium, in an event tabbed as “March with Mizzou.” The organization announced the event Monday.

“We, as student-athletes at the University of Missouri feel that nobody at Mizzou has been vocal about the displays of social injustices, police brutality or systemic oppression Black Americans have fallen victim to all summer,” the group’s original statement said.

Multiple changes were made in the days leading up to the event. The march was rerouted, and the organization amended its initial statement to clarify the goal of Wednesday’s march: to “promote unity against the injustices which continue in our nation.”

Despite the changes, Olivia Evans, MBSAA public relations chair, told a crowd of marchers who filled half of Memorial Stadium's lower bowl that it was a “great night to make some change.”

The march itself — about a 20-minute walk from Jesse Hall to the stadium — saw its fair share of familiar faces.

Athletic director Jim Sterk was in attendance, as was men’s basketball head coach Cuonzo Martin, who’s been vocal about the racist injustices that have taken place in this country all summer.

Head football coach Eli Drinkwitz could be seen carrying a sign that read “Preach and Teach ANTI-RACISM.” Several members of his staff were also in attendance.

But support didn’t end there. It appeared that all 18 of MU’s sports programs had a representative on hand, if not multiple.

The coaches, student-athletes and hundreds of various other protesters overtook the route — faces masked — as they marched down Tiger Avenue, chanting “Black lives matter,” “No justice, no peace” and “Hey hey, ho ho, racism has got to go,” among other calls and responses.

At one point, the crowd of marchers flooded Tiger Avenue for what looked to be an entire two blocks, a swell of people shoulder-to-shoulder and sidewalk-to-sidewalk.

After the march, people dispersed throughout the east half of Memorial Stadium’s lower bowl for a sit-in. It began with a five-minute moment of silence, and then Suggs and MBSAA vice president Keiarra Slack addressed the crowd as Evans, treasurer Atina Kamasi, outreach coordinator Arielle Mack and ambassador Kobie Whiteside stood behind them.

Suggs, who said he’d practiced his speech thousands of times, was still unsure of where to begin. So, he began with the memory of seeing a young Black man on television for the first time — a memory “clear as day,” he said; a young Black man who looked just like him.

That young man was 17-year-old Trayvon Martin, who died Feb. 26, 2012, after being shot and killed by George Zimmerman in Sanford, Florida. Martin was unarmed, carrying nothing but an Arizona Iced Tea and a bag of Skittles.

After Martin, Suggs said, he continued to look for others — on TV and elsewhere — who looked like him. But between people like Martin and Black figures he’d read about in history books who were assassinated, he found that the people who looked like him who were most celebrated were in sports.

“It created this weird slip, because it’s like, when I looked in the media, I saw Black athletes and dead Black people,” he said.

Suggs had always made it his plan to become like the athletes he saw, he said, but he noted that, if he became famous for his athleticism, it likely meant fame and financial status.

But if he used that platform to discuss Black issues? “Who knows?”

“When they fire the gun, I know exactly what to do to get to the finish line,” Suggs said. “But when I take my spikes off, when I go into the street, I’m nervous. Sometimes I’m paranoid.

“And I’m doing anything I can to not look suspicious, because I’ve been traumatized, because too many times, I’ve had people call the police on me for walking in a neighborhood that I guess they figured I didn’t belong in.”

Suggs also said discussions he’s had with people about creating change far too often hit on “Band-Aid moments.” Instead, he said, people need to see fighting racism like a stint in physical therapy.

“Therapy is long, and it is difficult,” Suggs said. “But a good trainer will come up to you and say, ‘Listen, it’s going to be a difficult task. It’s not going to be anything simple ... . But our goal is that when you leave here, you’re better than you were when you came in.”

Slack noted Martin’s death in her speech, too, and the unfortunate reality that injustices of that caliber haven’t ceased to exist, by any means.

“Sadly, this is a society that was created many years before Trayvon Martin and has tragically continued to live on since his death,” Slack said. “Fast forward into life.

“We have grown up in an era where we have seen the tragic murders of other Black brothers and sisters, like Mike Brown, Sandra Bland, George Floyd, Breonna Taylor and many other beautiful lives lost at the hands of injustice.”

The junior soccer player, who spoke for about 10 minutes Wednesday, aptly summed up her feelings in three words: “I am tired.”

“I am exhausted of seeing my brothers and sisters killed senselessly,” Slack said. “I want society to recognize that this is a human rights issue. It is not political. This is about respect. This is about inclusion.”

After Slack addressed the crowd, the night concluded for the masses, and one question remained: What comes next?

After the event, Suggs noted that a lot of what MBSAA is doing is “in-house.” He also said that the group was created this summer and that it has yet to connect with any other groups or student organizations.

“I think we didn’t even need to connect with different groups,” he said. “It was almost as if the suffering itself connected all of us.”

Both Drinkwitz and running back Larry Rountree used the same “in-house” phrase Saturday to describe the football program’s efforts to develop community outreach initiatives, which will presumably combat racist injustice and police brutality.

Whiteside mentioned Wednesday that the football program planned “on doing a lot of major things,” including a back-to-school book drive for students. The defensive lineman even noted a potential collaboration between the fledgling organization and his teammates.

“It just set a step,” Whiteside said of both Friday's football practice cancellation and the events of Wednesday evening. “Just step by step; set a brick here, a brick there to help build a foundation to something.”

Missouri student-athletes and fans marched from MU's columns into Memorial Stadium on Wednesday for March with Mizzou. The march, organized by…