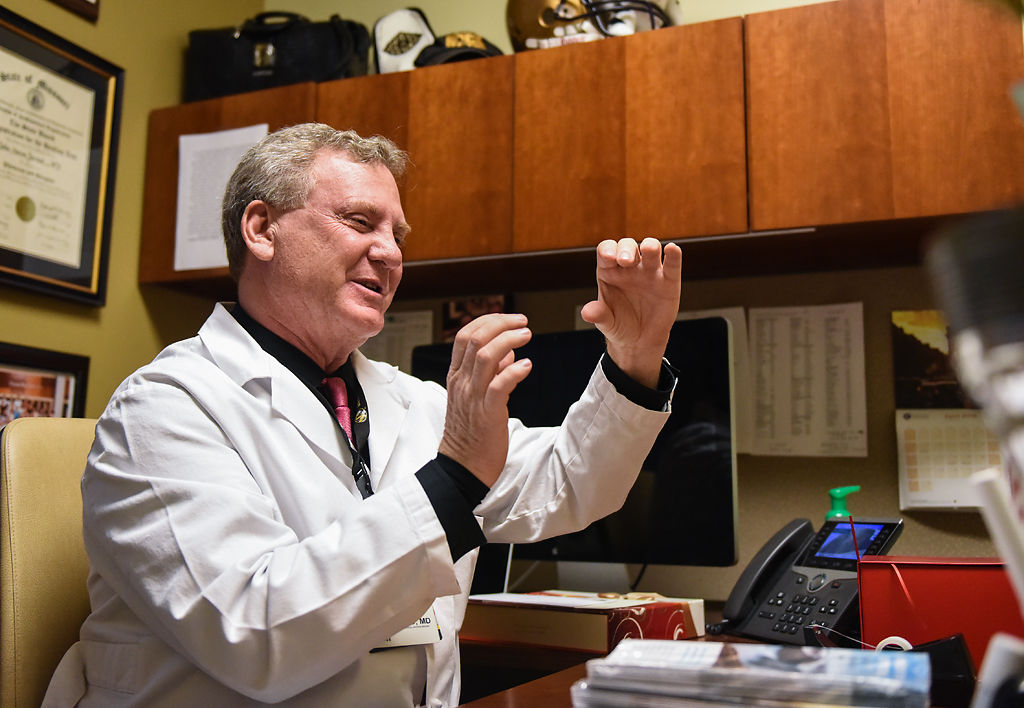 Dr. John Jarstad, an MU Health Care ophthalmologist, tells the story of his trip to Ecuador on Dec. 20 at MU Health Care’s University Eye Institute East. Before the ship he was on crossed the Panama Canal, a storm knocked a microscope out of position, and Jarstad’s team improvised a way to fix it. 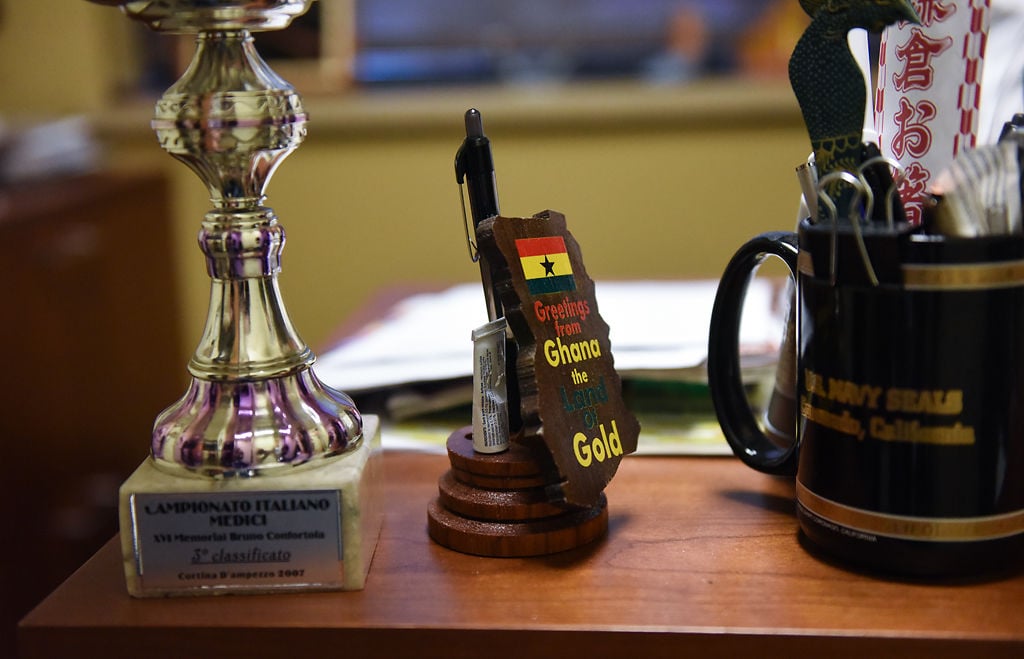 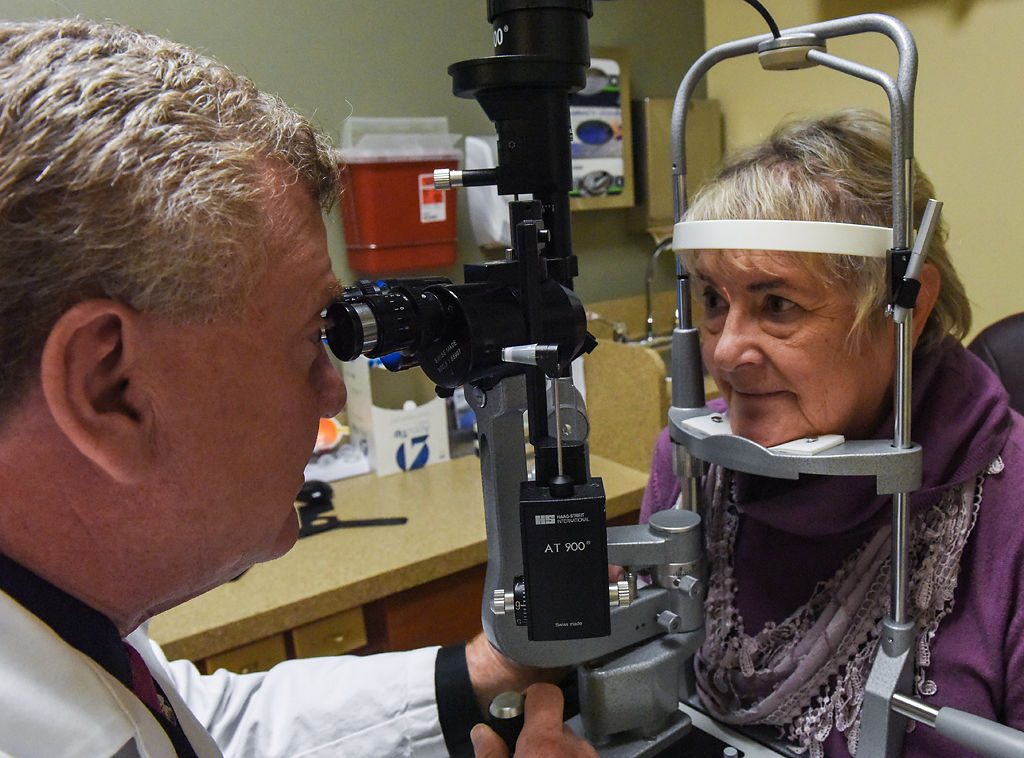 Dr. John Jarstad, an MU Health Care ophthalmologist, performs a check on patient Sharon Smith on Dec. 20 at MU Health Care’s University Eye Institute East. Jarstad performed cataract surgery on both of Smith’s eyes. Smith’s vision is now 20/20, and she does not need glasses for either driving or reading, Jarstad said.

Dr. John Jarstad, an MU Health Care ophthalmologist, tells the story of his trip to Ecuador on Dec. 20 at MU Health Care’s University Eye Institute East. Before the ship he was on crossed the Panama Canal, a storm knocked a microscope out of position, and Jarstad’s team improvised a way to fix it.

Dr. John Jarstad, an MU Health Care ophthalmologist, performs a check on patient Sharon Smith on Dec. 20 at MU Health Care’s University Eye Institute East. Jarstad performed cataract surgery on both of Smith’s eyes. Smith’s vision is now 20/20, and she does not need glasses for either driving or reading, Jarstad said.

After living in the dark for seven years, an Ecuadoran patient is able to see again thanks to cataract surgery performed by John Jarstad, an ophthalmologist with MU Health Care.

The patient's story left the biggest impression on Jarstad during his November humanitarian mission to Ecuador, where he served aboard the USNS Comfort, one of the U.S. Navy’s biggest hospital ships.

Jarstad, 63, recalled how the patient told him he’d been driven seven hours to get to the port of Esmeraldas, where the Comfort was anchored, then took a 30-minute boat ride to get to the ship.

During the journey, the patient “could only see the light and dark,” Jarstad said. “The next day, when the patch came off, it was almost perfect 20/20 vision.”

The Ecuadorian trip is one of more than 40 overseas missions Jarstad has made. His commitment to humanitarian missions was nurtured by a lesson from his dad, a TV sports announcer who also owned a sporting goods shop.

“My dad would take me with him when he would donate sporting equipment to orphan boys,” he said. “He taught me that ‘Once you have done well in life, you really have an obligation to help other people.’”

Working on a hospital ship

Most of the Navy personnel who participated in the trip to Ecuador boarded the Comfort in Norfolk, Virginia, its home port. The medical team flew from Columbia to Chicago then to Miami and Quito, Ecuador’s capital, before arriving in Esmeraldas. The team members slept there overnight and boarded the Comfort, about 5 miles offshore from Esmeraldas, the next day.

The Comfort had 12 operating rooms and was well-equipped, similar to the Missouri Center for Outpatient Surgery at MU, Jarstad said. The ship had an operating microscope and all the equipment necessary for modern cataract surgery.

But in a storm that struck the ship as it went through the Panama Canal, the microscope slammed against the wall, jarring the oculars out of position.

“We had to engineer a treatment for that by using the ‘prism lenses’” to move images back together and allow them to operate, Jarstad remembered.

Jarstad was involved in about a dozen operations while aboard the Comfort, either performing the entire operation or doing part of one while instructing eye surgeons from Ecuador, Peru and Mexico.

On a typical mission, usually lasting 10 days, the teams perform about 100 surgeries.

A four-month trip in 2012 aboard the USNS Mercy was an exception.

“We broke the record for U.S. Navy operations,” he said. “We did over 600 operations in Southeast Asia, including Indonesia, the Philippines, Vietnam and Cambodia.”

One thing the countries have in common is that patients there have more severe cataracts than in the U.S. Many of the patients Jarstad and his team operated on overseas were “literately blind.”

‘Blind the rest of his life’

Jarstad cannot remember exactly how many countries he has visited.

“I have been to Indonesia, the Philippines, Vietnam, Cambodia, North Korea, South Korea, Austria, Switzerland, Angola, Zimbabwe, Madagascar, Egypt and a few other places,” he said.

Even before The Associated Press opened its first bureau in Pyongyang in January 2012 to shed more light on the hermit kingdom, Jarstad had visited North Korea twice — once in 2011 and again in 2012. He said he even had a brief interaction with Kim Jong Un and played billiards with him.

Jarstad was fully aware at the time that the relationship between North Korea and the United States was “not very good.” The first trip began with a phone call from Manna Mission in Houston, Texas, in early 2011.

“They just called me up, and they said, ‘We hear you do medical missions. Would you come to North Korea with us?’”

But he had heard correctly the first time.

Initially, Jarstad feared the trip could not include Americans, but the organization assured him that he could go as part of a medical mission. The visa application process lasted around five months.

“(The North Korean government) had to have all of my grades from high school, through college and medical school and all my licenses, everything. They finally gave approval,” Jarstad recalled.

In September 2011, the team of seven doctors and 11 nurses and technicians flew to China then took a five-hour bus trip across the Han River and into North Korea. They stayed there for two weeks in the port of Rajin in Rason, a city near the border with Russia.

In North Korea, Jarstad saw an elderly man who had been told he had an incurable disease.

The patient couldn’t hide his excitement and tried to convey his gratitude to the doctor.

“I said to the interpreter: ‘What did he just say?’” Jarstad said.

The interpreter told him the man was thrilled because he had been told he would be blind the rest of his life. The patient concluded he could no longer believe anything his country told him. Jarstad said some of the most challenging cataracts he has seen were in North Korean patients because they had no previous treatment.

The medical situation is very different in each country the doctor visits.

His first overseas trip was to Zimbabwe in 1993. That was relatively early in his career, when he was teaching at the University of Washington in Seattle. During the trip, he found that doctors were using instruments and medical equipment from Cuba dating back to the 1950s.

He decided to help the doctors find people to donate modern equipment. He ended up taking more than 27 boxes of medical supplies to Zimbabwe.

“It was like Christmas for them” when the Zimbabweans opened the boxes, he said. “When we got into their hospital, they had nothing, not even eyedrops. So, it was great to stock their shelves.”

Vietnam also surprised Jarstad. When he visited Vinh in the northern part of Vietnam in 2012, he found that doctors had the latest microscopes, “even better than what we have at the university.”

“I was expecting like a Third World experience, and he had the latest microscope and the very latest artificial lens,” Jarstad said.

Angola, which he visited in 2014, occupied another place on the spectrum. It seemed to him to be one of the wealthiest African countries because it had gold, diamonds and oil. Doctors had all the latest equipment, but they didn’t know how to use most of it.

“So they wanted me to come over and teach,” Jarstad said.

All the doctors he met in Angola were women, as most of the men had been killed during a civil war.

Jarstad said he learns something new during every mission trip. When he went to the Philippines in 2001, he met Miguel Sarabia, whom he described as one of the world’s experts on manual small incision cataract surgery. Sabaria taught Jarstad the technique.

Teguh Susilo is a retina specialist whom Jarstad helped train during a mission seven years ago Indonesia. Susilo is now practicing in the port city of Surabaya.

“It all began in 2012 when I was a resident, and there was a program called Pacific Partnership from the U.S. Navy with its USNS Mercy coming to Manado City. It was the first time I met Professor Jarstad,” Susilo recalled in an email.

“It was a very exciting and wonderful moment for me, in which, under his close supervision, I attained the most important skill as an ophthalmologist, phaco surgery,” Susilo said. “By the end of the program, when the ship landed us back to the city, I was able to perform phaco surgery independently!”

One “closest and most respected” friend Jarstad has made overseas is Tjahjono Gondhowiardjo, former chairman of the Indonesian Ophthalmology Association. They met in 1994, when Jarstad and his wife were performing cataract surgeries on a small Indonesian island. Jarstad has been a frequent visitor to Indonesia since, participating in scientific meetings and giving lectures in the Department of Ophthalmology at the University of Indonesia, Jakarta.

“In every visit, Jarstad always donated many instruments, textbooks, and doing his charity work distributing glasses to the non-affordable persons,” Gondhowiardjo said in an email.

“I do believe that a man like John can always inspire and trigger younger colleagues to reach their best potential capacity,” Gondhowiardjo said.

Next spring, Jarstad will teach cataract surgery in India and Argentina. He wants to travel as much as possible before he grows too old. He’s aware that there is always a sacrifice for joining a humanitarian trip.

It’s more important to him, however, to get the feeling that “you’re not selfish, not only just out for yourself.” Many doctors he has met have become best friends even though they’re thousands of miles away.

And it’s all made him a better doctor, he said.

“It has been really rewarding to work with them and feel like you’re making a difference in the world and helping other people,” Jarstad said. “You just never know where your influence could end, because you teach one doctor, and then he takes care of thousands of patients at a higher level, maybe.”