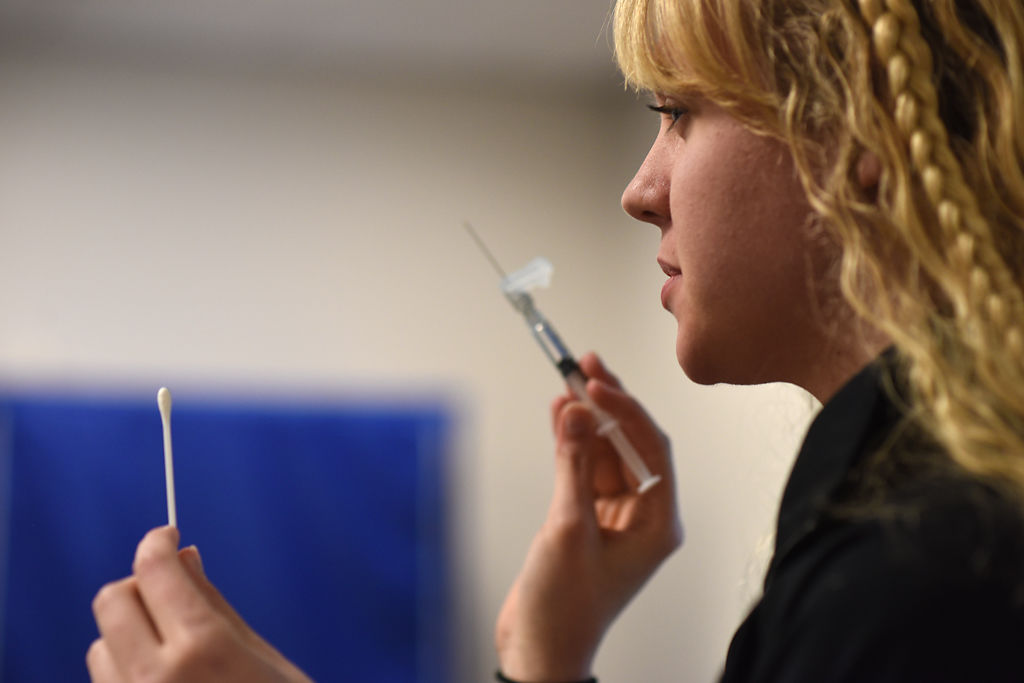 Victoria Ross demonstrates how to wet a swab with a syringe of sterile water Dec. 8, 2017, at Cox Medical Center South in Springfield, Missouri. 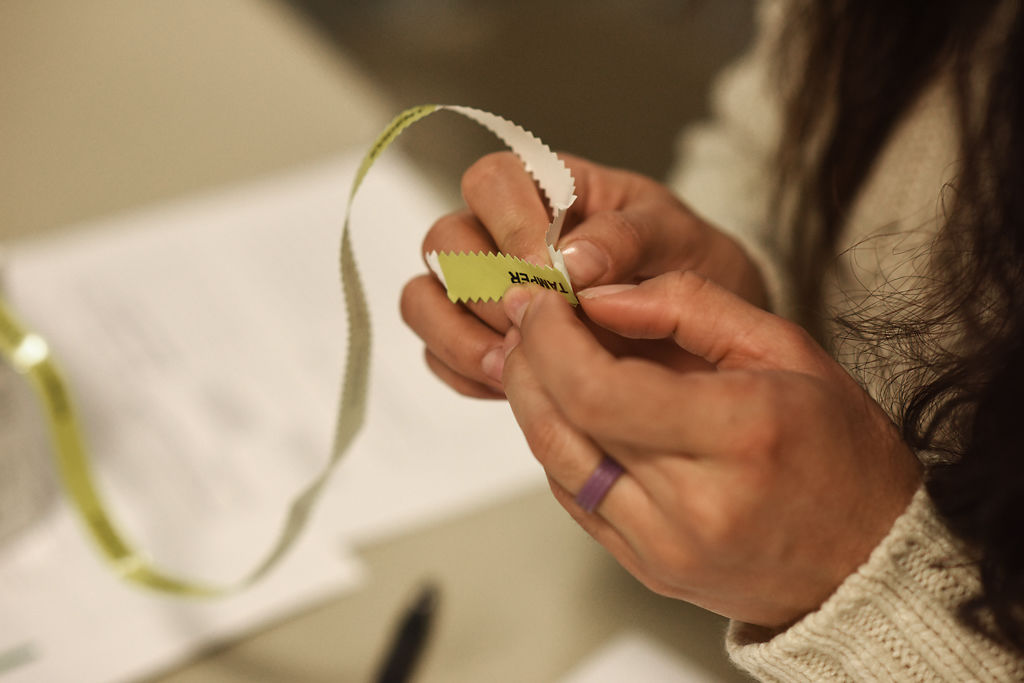 An ER nurse pulls off a piece of evidence tape to see how easily it tears Dec. 8, 2017, at Cox Medical Center South in Springfield, Missouri. The tape is used to seal forensic evidence so if it is tampered with it will immediately be obvious. 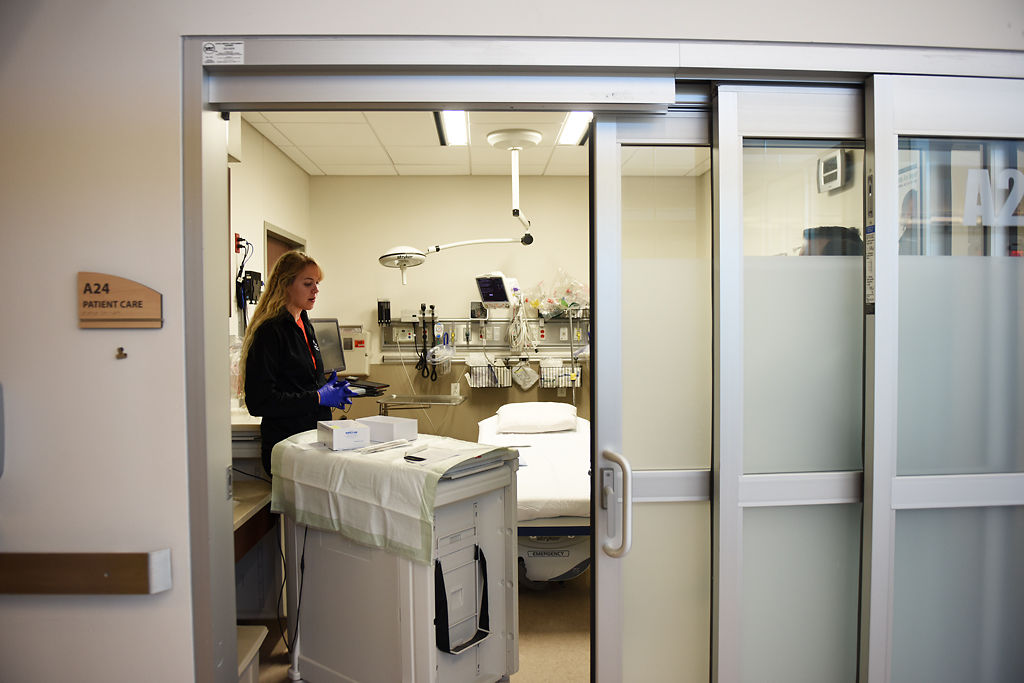 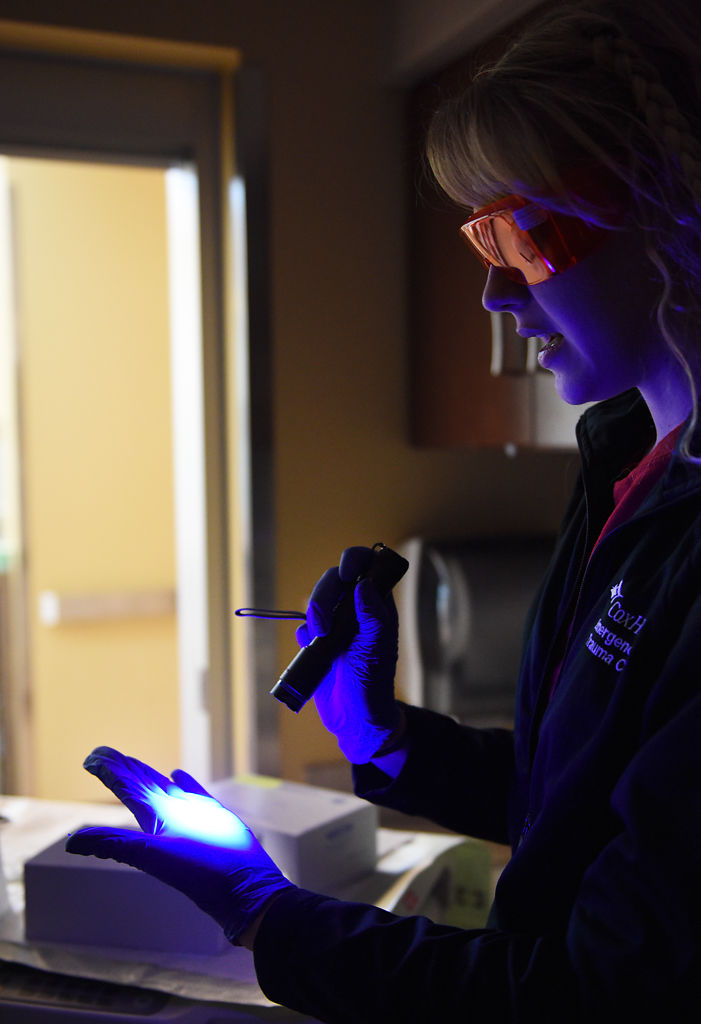 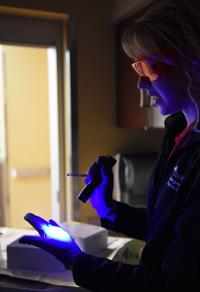 Victoria Ross demonstrates how to wet a swab with a syringe of sterile water Dec. 8, 2017, at Cox Medical Center South in Springfield, Missouri.

An ER nurse pulls off a piece of evidence tape to see how easily it tears Dec. 8, 2017, at Cox Medical Center South in Springfield, Missouri. The tape is used to seal forensic evidence so if it is tampered with it will immediately be obvious.

Legislation was passed establishing a time requirement for delivering kits to a crime lab, an electronic evidence tracking system and a sexual assault task force.

Two years ago, the Department of Public Safety was given the power to create mandatory procedures telling law enforcement and health care providers how to collect and store sexual assault evidence, but it declined to exercise that authority. Instead of creating rules, the public safety department created recommendations.

That leaves questions about how Missouri has gone about building a strong, statewide infrastructure for tracking and processing sexual assault evidence.

A 2017 Missourian investigation, which prompted the attorney general’s action, found that Missouri was one of 18 states that had never conducted a statewide audit of untested kits.

Since then, the attorney general’s office has received a $2.8 million federal grant from the Sexual Assault Kit Initiative funded by the U.S. Department of Justice to fund the inventory and testing of the backlogged evidence.

In response to the preliminary results of the audit, the Missouri legislature passed a bill in May 2018 to improve evidence transmitting, tracking and storage.

The bill also requires the attorney general to create an electronic evidence tracking system for the kits and the public safety department to develop forms and procedures for gathering, transmitting and storing the evidence.

The attorney general’s office announced the completion of its audit in November 2019, finding 6,987 untested kits with the oldest kit dating back to 1980.

Jennifer Carter Dochler, the public policy director for the Missouri Coalition Against Domestic and Sexual Violence, said though big legislative changes have happened, Missouri is not done yet.

They are designed to provide “patients, medical providers, law enforcement professionals, laboratory employees, attorneys and advocates with consistent information on the collection and processing of sexual assault kits in Missouri.”

But they’re just recommendations. Only the provisions written into statute are required by law.

This could lead to inconsistencies with how they are implemented across the state.

“They are guidelines so there is nothing that says, ‘You must follow this or this will happen,’” Carter Dochler said.

For example, the guidelines say health care providers shall send “unreported” kits — those involving a person who has chosen not to report a sexual assault to law enforcement — to the Missouri State Highway Patrol Crime Laboratory for storage. But that is not required by statute.

Nationwide it is estimated that 75% of sexual assaults go unreported to police, according to the Rape, Abuse & Incest National Network.

Before the guidelines were released, hospitals were acting as de facto evidence storage facilities since the national best practice is to not test unreported kits.

Whether a survivor wants to prosecute an assault or not, it is important to test all sexual assault evidence to identify repeat offenders and match unknown DNA to what is already on file, according to the 2017 Missourian investigation.

“They shouldn’t be continuing to stay in the hospitals,” Carter Dochler said. “Hospitals aren’t meant to be an evidence storage facility.”

The coalition was expecting the public safety department to come out with rules and regulations, which act as an extension of the law and are required to be followed, Carter Dochler said.

The statute also requires that the public safety department develop rules and regulations for the reimbursement of health care providers for administering the sexual assault forensic exam so survivors do not have to pay for it.

Carter Dochler said the department’s legal counsel interpreted the statute to mean it was only required to create rules and regulations for reimbursement.

“We have thought it was going to be rules and regs,” she said. “But sometimes you can have different legal opinions, and I can see their interpretation of the guidelines.”

However, the statute states “the department shall have authority to promulgate rules and regulations necessary to implement the provisions of this section.”

The guidelines on the department’s website offer no further guidance or information for health care providers about how to implement them.

Carter Dochler said she was not aware of any plan the public safety department has for educating providers about the guidelines.

Dr. Jeanise Butterfield, the medical director of sexual assault nurse examiners at MU Health Care, said the hospital had not received any guidance from the public safety department.

Butterfield said that MU Health Care is working as a system to develop new processes while also collaborating with law enforcement and the crime lab to begin implementing them.

When asked how the public safety department was helping law enforcement and health care providers implement the guidelines, O’Connell reiterated that the department lacks the jurisdiction or responsibility to do so.

Carter Dochler said the coalition was included in an initial working group to create the guidelines back in 2018 but had not seen them before they were released in February. She said she expected the guidelines to be taken down and revised to further clarify details and reduce confusion.

“My understanding is that their current plan … is that they are going to be pulling the current guidelines down and updating it and then actually asking for comments on the next draft,” she said.

O’Connell wrote: “As appropriate, DPS is open to continued improvements to the guidelines, within the parameters established by the statutes.”

One backlog for another?

Attorney General Eric Schmitt announced in January that the first batch of untested kits from the 2018 inventory was collected at the Springfield Police Department and sent for private lab testing.

In March, the fourth batch of untested kits was delivered for testing from the Columbia Police Department. The department acted as a host agency, collecting 160 backlogged untested kits from 18 mid-Missouri law enforcement agencies, according to a news release from the attorney general.

A total of 596 kits from the backlogged inventory had been sent for testing as of April 30.

While the federal grant funds the testing of the kits found in the attorney general’s inventory, it includes only kits collected before April 30, 2018.

The 2018 statutory revisions require law enforcement to send kits to a crime lab within 14 days of picking them up from health care providers.

That has caused a backlog of kits awaiting testing.

As of May 1, there were 960 kits waiting to be tested, according to the Highway Patrol’s website.

When the statute changed in 2018, no one knew how many kits would be sent to the crime labs or what resources would be needed to test them all, Carter Dochler said.

“We now know that it was a large number, more than what the crime labs have been able to process within 30 days,” she said.

Gov. Mike Parson recommended the Highway Patrol Crime Lab get $1 million in federal funds as part of the fiscal year 2021 budget to eliminate the backlog.

Legislation working to expand survivors’ rights and improve evidence tracking and storage passed the Missouri legislature by a vote of 150-3 May 12.

SB 569, proposed by Sen. Andrew Koenig, R-Manchester, gives the public safety department the authority to establish a central repository for the storage of unreported kits.

It also requires all entities that have custody of a kit or are involved with its destruction to participate in the electronic evidence tracking system.

Survivors will have access to the system to stay updated on the status of their kit, and the law establishes a Sexual Assault Survivors’ Bill of Rights.

Carter Dochler said there is a lot in motion, though waiting for change can be frustrating.

“I think that there’s a lot of strong support and wanting to do better,” she said. “So I feel very hopeful.”

Opponents argue the legislation could cause conflicts of interest.

It would let survivors track evidence, require hospitals to offer examinations and create a survivors’ Bill of Rights.