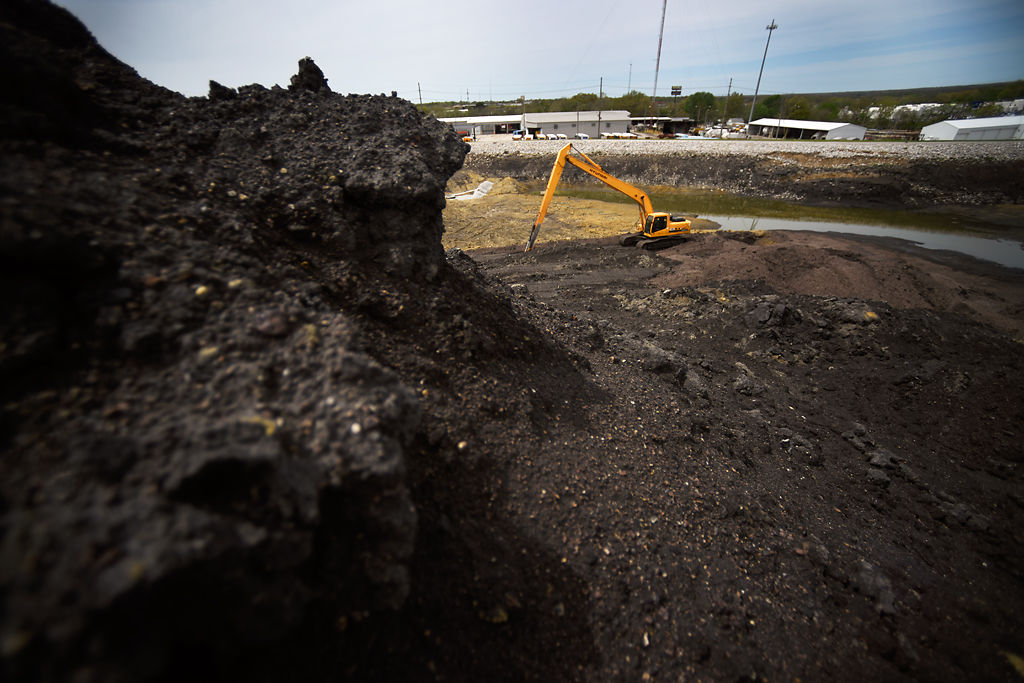 More’s Lake sits hidden behind mounds of coal ash on April 17 at the Columbia Municipal Power Plant. Coal ash is being removed from the body of water in hopes of making a lake a recreational spot again. 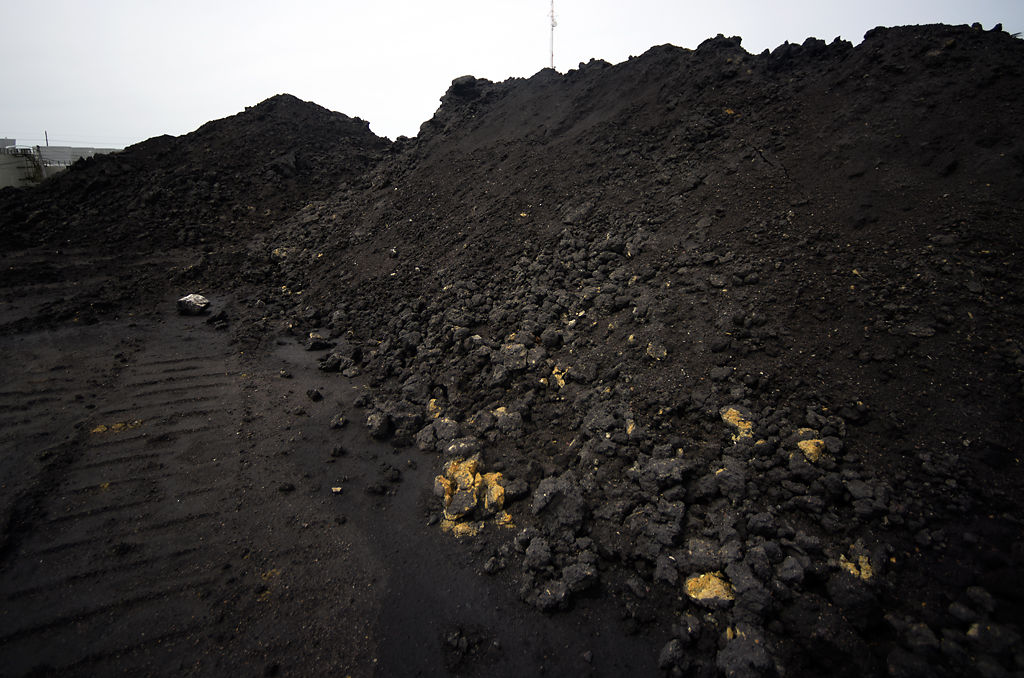 The effects of the years of coal burning at the Columbia Municipal Power Plant can be seen in the mounds of coal ash that surround More’s Lake. The ash is a byproduct of the coal burning process and can potentially contain hazardous contaminants like mercury, according to the Environmental Protection Agency. 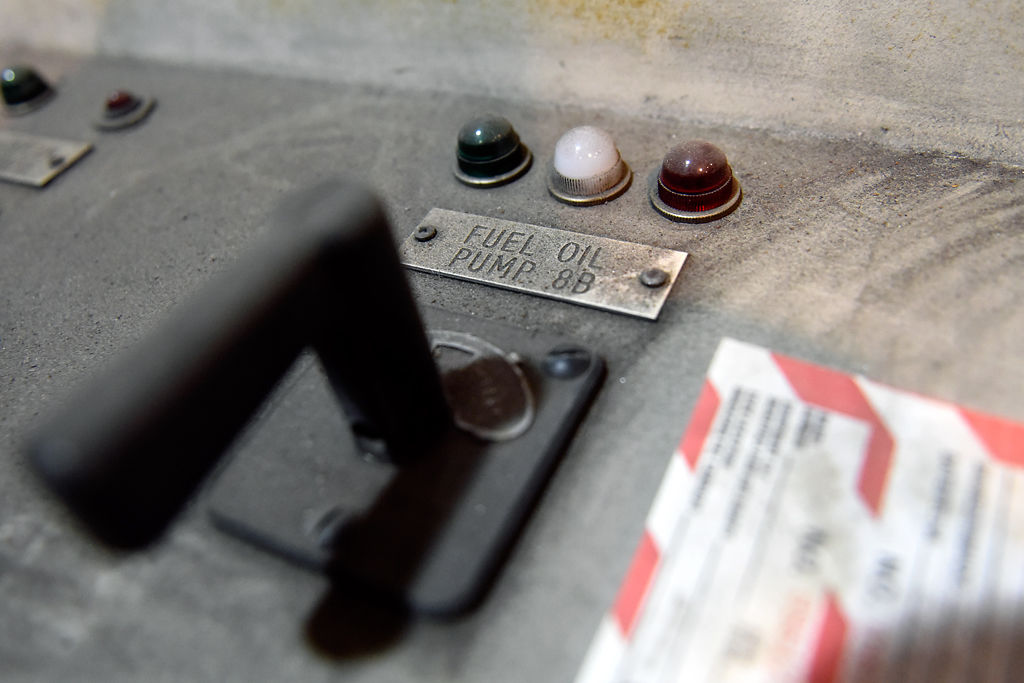 Along with danger tags, fuel gauges and levers, an old fuel pump switch collects dust with other coal burning machinery. The Columbia Municipal Power Plant burned coal fuel for 100 years before it was converted to other fuel sources. 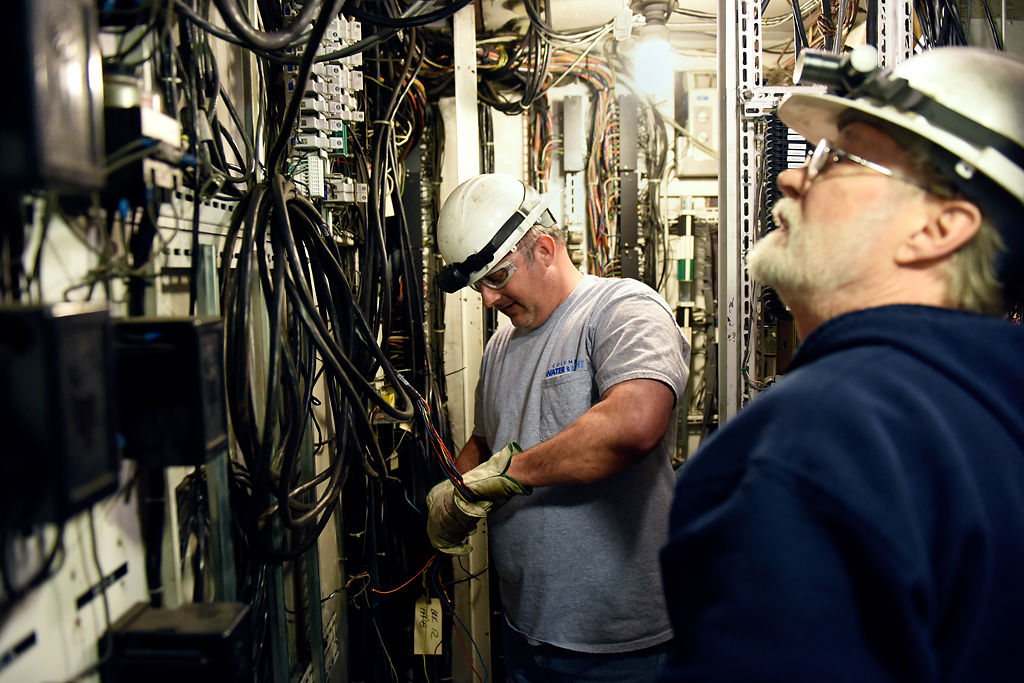 Behind an old control panel in a jungle of wires, Frank DiCarlo, left, and Robert Redmond run new wires April 17 through the halls of Columbia Municipal Power Plant that encase the obsolete coal burners. The boilers were shut off in 2015 when new regulations made coal fuel unviable. 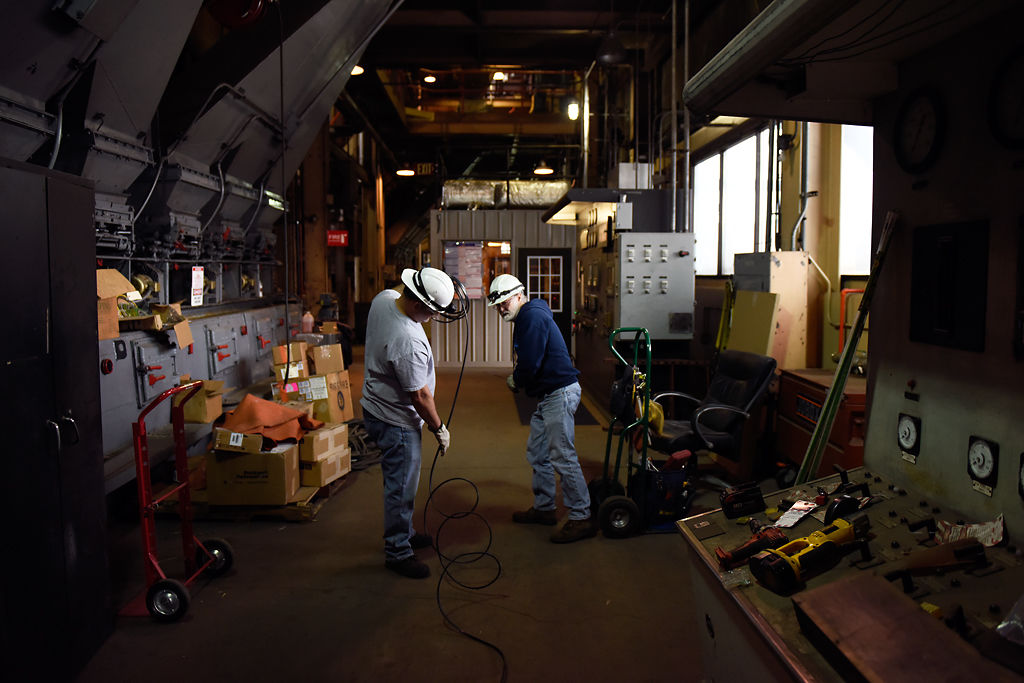 A coal-burning boiler that was once essential to the power plant that provided energy to all of Columbia sits derelict and covered in dust as Robert Redmond, left, and Frank DiCarlo modernize the control systems on April 17. The power plant switched from burning coal to natural gas two years ago as part of a transition to more viable fuels. 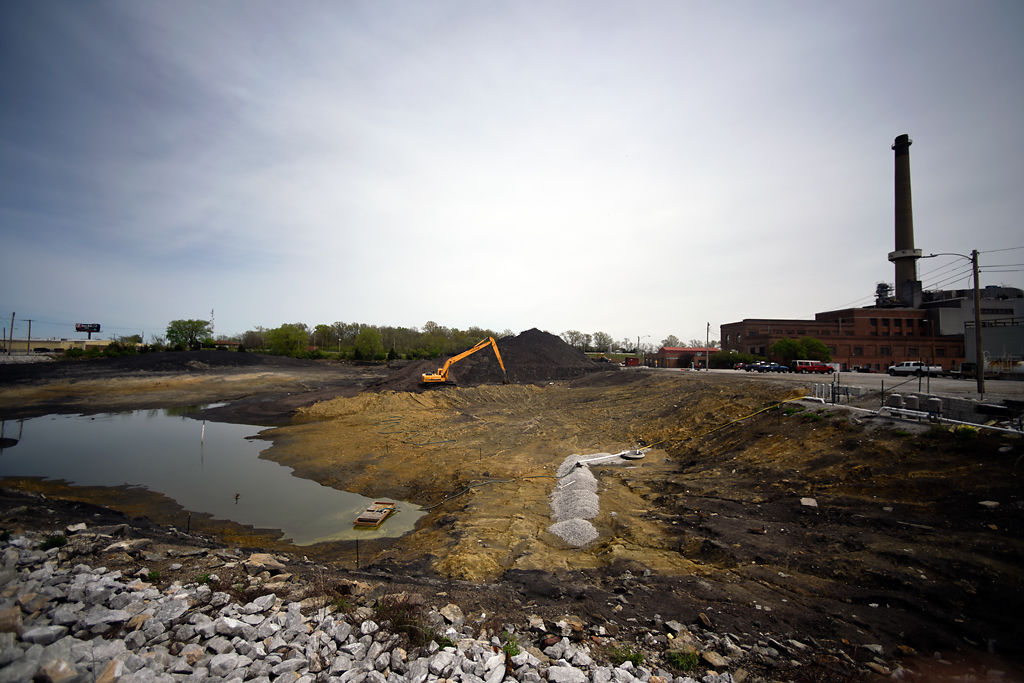 More than a half-million cubic feet of coal ash remains between More’s Lake and the Columbia Municipal Power Plant on April 17. The ash, a byproduct of the coal burning process, is being excavated as the first part of an effort to make More’s Lake available to the public.

Undated aerial photographs show not just the growth of the Columbia Municipal Power Plant, but also growth of ash pollution in nearby More's Lake. Water and Light superintendent Christian Johanningmeier says he thinks the photographs were probably taken by aerial photographers and sold to the power plant for novel purposes.

More’s Lake sits hidden behind mounds of coal ash on April 17 at the Columbia Municipal Power Plant. Coal ash is being removed from the body of water in hopes of making a lake a recreational spot again.

The effects of the years of coal burning at the Columbia Municipal Power Plant can be seen in the mounds of coal ash that surround More’s Lake. The ash is a byproduct of the coal burning process and can potentially contain hazardous contaminants like mercury, according to the Environmental Protection Agency.

Along with danger tags, fuel gauges and levers, an old fuel pump switch collects dust with other coal burning machinery. The Columbia Municipal Power Plant burned coal fuel for 100 years before it was converted to other fuel sources.

On hot summer days, families held picnics and swam along its eastern shore. Anglers cast their lines into the shallow waters in hopes of hooking a catfish or bass. At night, teenagers danced across a concrete island just above the lake's placid surface.

Today, a mountain of ash sits next to a crater where the lake used to be.

For more than a century, the Columbia Municipal Power Plant burned coal to meet the city's growing demand for electricity. However, stringent  Environmental Protection Agency regulations compelled the power plant to abandon its main source of energy in 2015.

The coal-filled train cars stopped coming, but the 90,000 cubic yards of ash that sat at the bottom of More's Lake remained.

Paying for the past

Back in the 1960s, when the plant was no longer able to satisfy Columbia's hunger for power, the plant expanded its coal-burning capacity. Presented with the new problem of where to discard the resulting ash, the Columbia Water and Light Department elected to unload it into More's Lake, which had served as a popular spot for recreational fishing and swimming.

The end of coal combustion in 2015 triggered another EPA regulation, which states that the city must restore the lake to its "original condition" by April 2020. The project entails excavating the ash from the lake, dumping it in Columbia's landfill and rehabilitating the lake's dam and shoreline, according to a staff memo to the Columbia City Council. The cost of the undertaking has been estimated at $7.8 million, but Water and Light officials think they can make it cheaper.

The council appropriated another $1 million to the project during its meeting last week, on top of the $1.3 million that's already been allocated. Several members of the council expressed tentative interest in returning the lake to recreational use, but that cost is not included in the current estimate.

"I'm looking forward to seeing More's Lake come back as some type of resource," Second Ward Councilman Michael Trapp said. "It would be nice to see something going from an environmental hazard to some type of community asset."

Elawson Carry More, better known as E.C. More, created the artificial lake in the late 1800s on his spacious estate along what was then the northern border of Columbia.

Born in Little Rock, Arkansas, in 1837, More became well-versed in classical literature and European languages from a young age, studying at colleges in Paris; Cadiz, Spain; and Hanover, Germany, before his 18th birthday. After graduating from Yale, he attended law school and practiced in St. Louis and Helena, Montana, before settling in Columbia, according to the "History of Boone County" compiled by Col. William F. Switzler.

Switzler offered a sketch of More's life. Several years after arriving in Columbia, More decided to give up law in favor of farming and quickly become one of the wealthiest men in the city of less than 3,000, Switzler wrote. On the side, he sold Columbia residents fresh water and ice from two wells next to the lake.

An outspoken Democrat and avid participant in public life, More served as president of the State Board of Agriculture and briefly as the U.S. consul general in Mexico City. As a presidential elector, he participated in the Democratic presidential nominations of Samuel Tilden and Grover Cleveland.

The Missourian described the late E.C. More as a "liberal entertainer" with the charm of a Southern gentleman in a 1920 article preserved on microfilm by the State Historical Society of Missouri.

From picnicking spot to ash pit

The lake remained in the More family's estate until the city's electric utility bought it shortly after More died in 1902.

Initially, water from the lake was used to cool power plant equipment during the hot process of burning coal to produce electricity. During this time, the lake became a favored fishing and picnicking spot of Columbia residents on pleasant summer days, according to a 2004 history of Columbia Water and Light issued by the department.

The plant was forced to expand its capabilities after World War II to meet the electrical demands of Columbia's rapidly growing population. By the mid-1960s, the lake could no longer supply the massive amounts of water needed to cool the supplemental boilers.

The addition of cooling towers near the plant resolved this issue, but Water and Light officials determined another use for the lake. The ash created as a byproduct of burning coal — city and federal folks call it coal combustion residuals, or CCR — had to be discarded using a secure method. But instead of trucking it to the nearest landfill, it could be simply dumped in the lake.

The city permanently closed the lake for recreational use.

The project to restore More's Lake began in September 2015 after the plant burned its final load of coal.

First, the water in the lake was drained so the ash could be removed more easily. Next, two Water and Light employees dredged the lake using excavators and piled up most of the 90,000 cubic yards of ash along what used to be the southern shoreline.

With the lake drained and the ash removed, the next step will be loading the ash into dump trucks and taking it to the Columbia landfill.

City council members last week marveled at the magnitude of the project. Water and Light Director Tad Johnsen told them that a single dump truck holds about seven cubic yards of material. Mayor Brian Treece used his phone to calculate that about 13,000 dump truck trips will be needed to completely remove the piles of ash.

Johnsen conceded that this phase of the project will be tedious.

Of the $1.3 million previously allocated to the project, the department has spent about $700,000 for engineering and the development of a groundwater monitoring system, which the EPA requires.

The $1 million in new money the council chipped in will be used to transport some of the ash from the shores of the lake to the landfill over the next few years. The council will need to allocate more money in the coming years to transport the remaining ash and restore the lake, Johnsen said.

Water and Light hired engineering firm Burns & McDonnell in 2016 to help with the project.

It's been nearly 50 years since anyone has caught a fish in More's Lake. Still, some Columbia residents recall with fondness the days when catfish and bass darted through its muddy waters.

Donald Wobbe, 59, now of Harrisburg, used to sit among cattails and fish after completing his early morning paper route in the 1960s. He remembers catching bluegill, bass and 15-pound catfish with his brother and father.

"It used to be a real good place for people to bring their families," Wobbe said. "It was a good lake, and it had some good fishing. I lived just about four blocks from it, and I used to ride my bicycle up there and fish all the time."

Maribeth Jackson, 80, of Columbia thinks the lake was one of the first public parks in Columbia. As a teenager in the late 1940s, she used to dance with friends on the concrete island after sunset.

Although Jackson said the city has more pressing priorities, she would like to see the lake returned to its former state some day. She envisions a welcoming public park complete with swing sets, teeter-totters and picnic tables.

After the lake is restored, the council will have several options to consider, Water and Light Superintendent Christian Johanningmeier said. Converting the lakeshore into a park and returning it to recreational use would likely be among them.

Water and Light will continue to use the lake for the foreseeable future to discharge water from the plant's cooling towers and comply with the city's stormwater regulations, Johanningmeier said.

At last week's meeting, several council members bemoaned the cost of the project but recognized the city's responsibility to return the lake to its previous form.

"From a historic perspective, More's Lake exists on one of the earliest hand-drawn plat maps of the city of Columbia I've ever seen," Treece said. "I think it's good stewardship to remediate it back to its original condition."

Get up to speed with the Missourian's City Roundup on what's happening in local government.