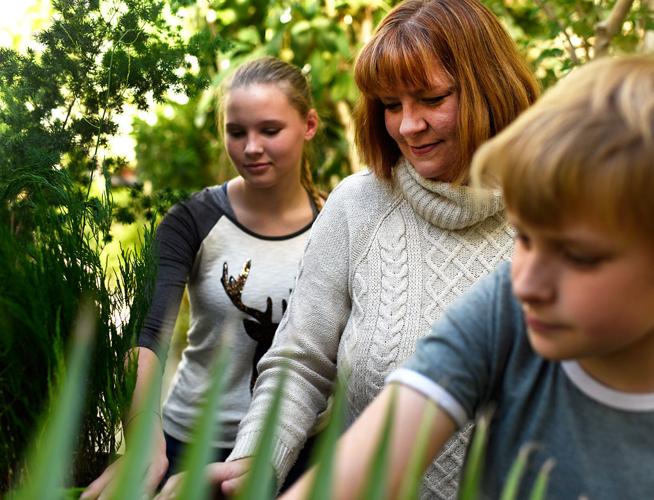 From left to right: Liberty Stone, Bethany Stone and Archer Stone inspect plants on Oct. 29 at the Tucker Greenhouse in Columbia. Stone, an MU botany professor, and her family frequently spend their free time checking on their favorite plants in the greenhouse. “It’s probably our favorite place in Columbia,” Stone said. 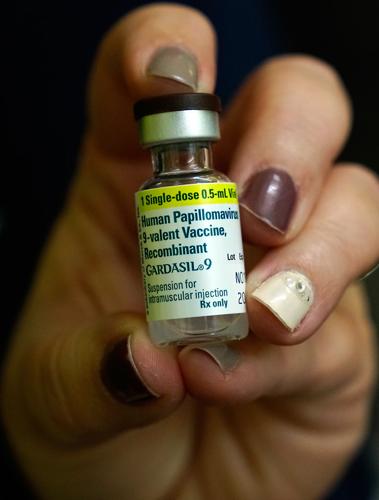 A public health nurse holds a vial of HPV vaccine on Oct. 17 at the Columbia/Boone County Public Health and Human Services Department. HPV is a protective vaccine to prevent various types of cancer. It is administered to young adults.

From left to right: Liberty Stone, Bethany Stone and Archer Stone inspect plants on Oct. 29 at the Tucker Greenhouse in Columbia. Stone, an MU botany professor, and her family frequently spend their free time checking on their favorite plants in the greenhouse. “It’s probably our favorite place in Columbia,” Stone said.

A public health nurse holds a vial of HPV vaccine on Oct. 17 at the Columbia/Boone County Public Health and Human Services Department. HPV is a protective vaccine to prevent various types of cancer. It is administered to young adults.

The date of the launch of the Moon Shots program was incorrect in an earlier version of this story.

One hundred percent. Total success. That’s the goal of a new program aimed at increasing the number of children, teens and young adults who receive the human papillomavirus (HPV) vaccination.

MU’s Ellis Fischel Cancer Center is one of four health care hospitals nationwide working with Texas-based MD Anderson Cancer Center on the Moon Shots program. The program was launched in 2012 in Texas with the ambition to improve cancer prevention, early detection and treatment across the country. August was the official kickoff for MU’s part in the project.

“Our goal is to get 100 percent of the population to be vaccinated,” said Eric Kimchi, who is heading the program at MU. “One hundred percent is always an unrealistic goal, but that’s what we would like to set as our goal.”

Short term, the goal is to increase the HPV vaccination rate in Missouri by 10 percent in one year, he said.

In general, about 90 to 95 percent of the population needs to be vaccinated to create herd immunity, which is necessary to protect people who are vulnerable such as those with an allergy to one of the ingredients of the vaccine.

Mark Hunter has seen the results of the low vaccination rate as a gynecologic oncologist at Ellis Fischel Cancer Center. “I treat the real-world consequences of the HPV-related infections,” he said, “and cancers are what they cause.” Hunter is an advocate for the center’s HPV vaccination initiative.

“I have patients who are in their early 20s with HPV-related cervical cancer, and I have patients in their 80s with HPV-related cervical and oral cancer,” he said. “People in their 20s, 30s and 40s have died from cancers that could have been prevented. That’s my motivation for being involved with the program.” The vaccine also prevents some precancerous conditions that require extensive treatment and sometimes result in lifelong disabilities like fibrosis, scarring and neuropathy, Hunter said.

A challenge to raising the HPV vaccination rate has been getting parents to take an action early in their children’s lives that acknowledges that someday, and maybe sooner than they think, their child will become sexually active, said Trina Teacutter, nursing supervisor for Columbia/Boone County Department of Public Health and Human Services.

Because their children are not yet sexually active, parents don’t think it’s important to get their children vaccinated, she said. So they delay. “However, it’s important to offer that vaccine and get that series completed before a child becomes sexually active,” Teacutter said. “It helps protect them better if we can get the doses administered to them before they’re exposed to that virus.”

Although children are not usually sexually active at the age of vaccination, they need it to prevent future illnesses.

“We’re talking about vaccinating for a problem that happens a decade or decades after you get the infection,” said Kimchi, who is medical director at Ellis Fischel Cancer Center and chief of oncological and general surgery. “It’s not like somebody who gets measles or something like that (where) you have an immediate problem.”

People sometimes think there are other forms of protection from the virus, but that’s an illusion, said Bethany Stone, an MU teaching professor in the division of biological sciences, who teaches a class on infectious diseases.

For example, people think condoms provide protection from HPV. But the virus can be transmitted via contact with parts of the body that are not protected by condoms, Stone explained.

Stone says one of her colleagues puts it this way: “’At some point, our children have to have unprotected sex, if we want future generations, right?’ So even if condoms do work, there will still be vulnerable times.” She said abstinence doesn’t work, either, because people can be exposed once they are involved in a committed sexual relationship.

About 14 million Americans, including teens, become infected with HPV every year, according to the Centers for Disease Control and Prevention. Eighty percent of people will get an HPV infection in their lifetime.

Some parents are acting on bad information in deciding not to vaccinate their children for HPV, and Stone sees the situation getting worse as people rely on whatever kinds of information they find on the internet.

As a mother of a 13-year-old girl and an 11-year-old boy, she had to make a decision about the HPV vaccine. Stone said she researched the question by reading many large peer-reviewed studies, and many of the concerns she’d seen raised on social media proved groundless.

The World Health Organization’s Global Advisory Committee on Vaccine Safety has been monitoring the HPV vaccine around the world and has not found any problems with it, she said.

Over 270 million doses of the HPV vaccine have been distributed since 2006, according to the committee’s latest weekly epidemiological record. The risk of serious allergic reaction has been characterized as approximately 1.7 per million doses.

The Global Advisory Committee on Vaccine Safety considers the HPV vaccine to be extremely safe, according to a weekly newsletter for the World Health Organization.

Stone said she doesn’t have any lingering concerns about complications, either as a professional or a mother. She said her daughter received the shot sequence two years ago and her son will get it this year.

Many 12-year-olds might not fully understand the connection between sex and STDs, Stone said — so the HPV vaccine is also a great opener for parents to start that conversation. “I’m gonna protect you against this (virus) that causes cancer,” she said to her daughter, “There a whole bunch more out there, and this is what you need to do.”

The HPV program isn’t the only effort underway in Missouri to increase the vaccination rate. Campus health professionals are also trying to make students aware of the vaccine.

Scott Schmidt, a nurse working at the MU Student Health Center, routinely reviews immunization records and administers vaccines. He said he always talks to students age 26 or younger about the vaccine during visits and advises them to consider getting it “not only for your personal safety and health but also because your health insurance will pay for it.”

One shot alone can range from $130 to $150, and for the whole series, prices rocket to $390 to $450, according to Association of Reproductive Health Professionals.

This does not include a possible fee from providers to give the shot. When parents are present, however, deciding whether to talk about the vaccine depends on the atmosphere in the room, he said.

“If I’m feeling that it’s real comfortable, then I’ll feel comfortable discussing it in front of the parents,” he said. “If not, then I would probably just wait until the student’s next appointment.”

Schmidt said many students have heard about HPV before their visit, but occasionally, a lack of awareness can make the conversation very difficult.

“Sometimes parents don’t believe in the vaccine, and of course, they communicate that to their children,” Schmidt said. “Some students just don’t feel comfortable doing something their parents don’t want them to do, even though they’re 18 years or older.”

The Student Health Center also tries to promote the vaccine by encouraging students to talk to their friends about it. In that sense, the campus community can serve as an extension of the health center, he said.

Beyond campus, pediatricians will play a major role in boosting the vaccination rate in the state. “Pediatrics in general practice are sort of a front line of how to get people vaccinated,” Hunter said.

Ellis Fischel’s piece of the Moon Shots program entails working directly with pediatricians to devise a plan of action.

Lawson, the director of the pediatric and adolescent specialty clinic, has been practicing for 18 years and is the project leader for the adolescent medicine clinic. The clinic’s plan is to educate not only primary health care providers and pediatricians but also nurses and other staff members about vaccine recommendations, if a parent or patient has questions, she said.

Finally, the project plans to educate parents and patients about all the vaccines that are recommended. “The hope is that if enough people get vaccinated against HPV, or polio, or any of these things that we can now prevent, then eventually, these diseases will just cease to exist in the nature,” Stone said, “and that would be incredible.”

How does vaccination work with a child’s immune system?

The vaccine activates the immune system’s response, producing a long-lasting memory so that the system can seize and destroy the virus when the body is rechallenged.

There is a chance for side effects for any medication. Common side effects include a headache and swelling or pain at the vaccination site and sometimes fainting. Symptoms are usually mild and go away on their own.

After each shot, people are required to remain seated for 15 minutes. This common practice can prevent fainting and related injuries.

How do the benefits compare to the risks?

The prevention of cancer far outweighs the risks of possible side effects.

Given that the HPV vaccine prevents serious cancers and other diseases in both males and females, choosing not to vaccinate is not a risk-free choice.

Why should people get vaccinated for HPV at a younger age?

Children respond better to the vaccine than young adults.

It’s important to get the protection before exposure.

What about the claims about vaccination and autism?

There is no link between vaccination and autism.

Can people get the vaccination but still be infected?

Yes. The HPV vaccine targets the most common cancer-causing strains of the virus but not every one of them. Although the vaccine lowers the risks significantly, it isn't a substitute for cervical cancer screening through a Pap smear.

Patients at Fulton Family Health Associates will now have the option to receive inpatient and outpatient care at MU Health Care facilities.