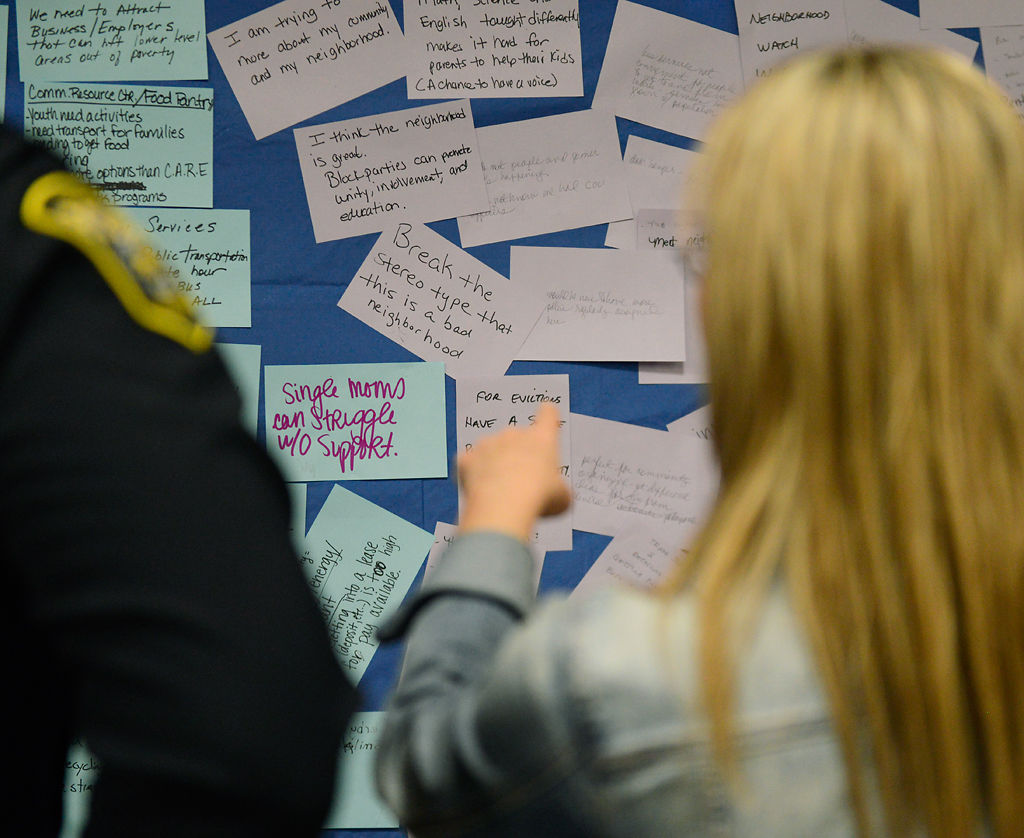 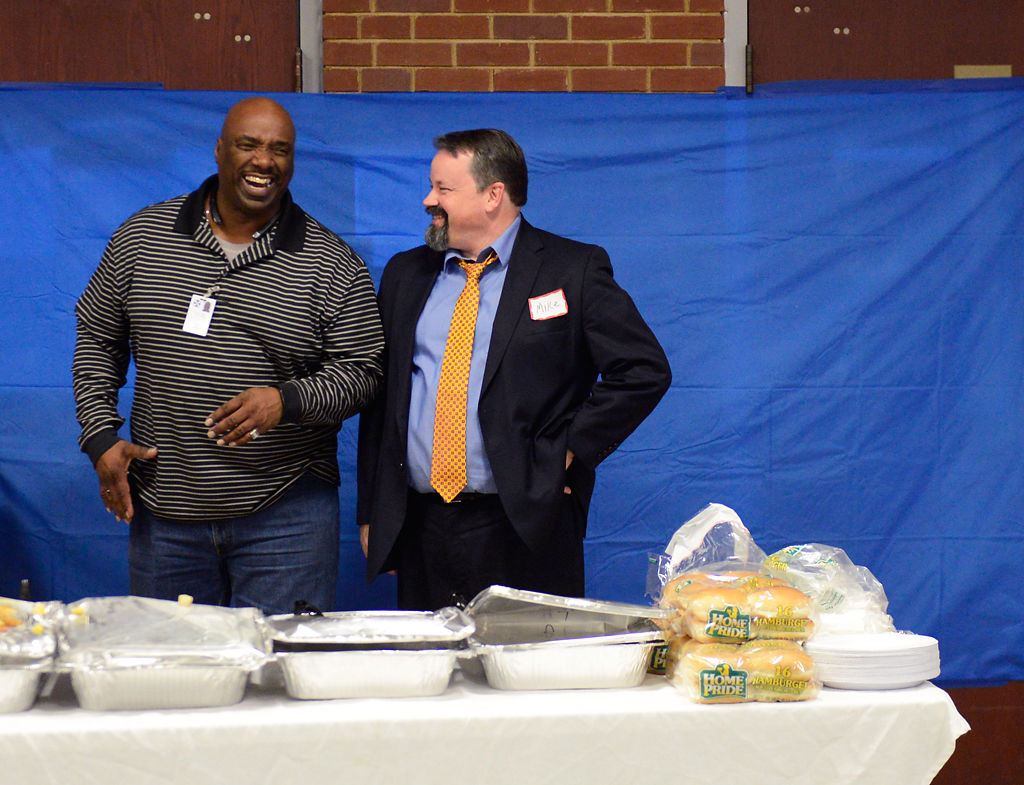 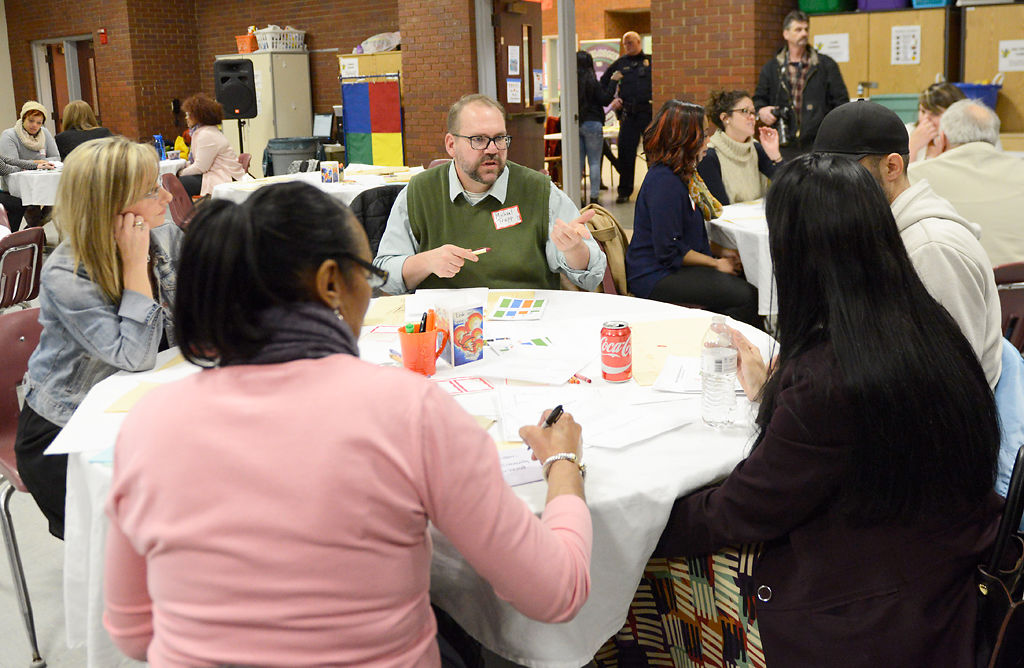 Scott Lenger's name was misspelled in the original story.

COLUMBIA — Five months ago, a driver traveling down Edenton Boulevard in north Columbia would have encountered an unlit dead end.

Today, that dead end is lit up with new streetlights, and it features a pole that will soon become a basketball hoop.

This is the kind of progress that motivated Ahmonta Harris to attend the second north neighborhood community meeting on Thursday evening at Derby Ridge Elementary School.

"It takes action to get things done and for progress to be made," Harris said.

Thursday's was the second of three meetings the city of Columbia will host with the north neighborhood as a part of its 2016-2019 strategic plan to address social, economic and racial disparities in the north, central and east neighborhoods.

The city identified the three neighborhoods as areas that have disproportional crime, unemployment and poverty rates compared with the rest of Columbia. The strategic plan was drafted with the intention of talking to residents in the neighborhoods and using those conversations to implement the plan.

"The key thing that we didn't want to do was to have an idea and say, 'Let's do this everywhere,'" said City Manager Mike Matthes. "We wanted to learn what the community wanted to see changed. ... We learn more when we connect with people."

Nikki McGruder, a consultant on the plan with Diversity Awareness Partnership, said progress started when the city found disparities in 2013 unemployment rates between white and black residents. About 4.4 percent of white residents were unemployed, compared with 15.7 percent of black residents, according to previous Missourian reporting.

"They have to admit that there is a challenge and begin reaching out to the community," McGruder said. "Starting a dialogue seeks out action."

The city hired five people to help implement parts of the plan. McGruder, Carolyn Sullivan and Elisa Glick from New Chapter Coaching are consultants on the plan and are in charge of running the community meetings. Glenn Cobbins Sr. and Judy Hubbard were brought on as neighborhood outreach specialists, which means they go door-to-door throughout the community to hear directly from the residents.

The approximately 40 residents who attended Thursday's meeting split into eight groups, each with a moderator, to discuss three questions drafted by the consultants. The groups talked about one question for 15 minutes before moving to a different table to answer another question.

McGruder explained that this format is effective in getting people to talk openly about problems in the north neighborhood, which will eventually lead to action.

The first question asked what motivated people to come to the meeting. Many responded that they wanted to learn about the city's progress on the strategic plan, and some wanted to talk about their experience living in the neighborhood. The second question asked which of the issues from the last meeting on Sept. 20, such as affordable housing, community resources, public safety and city services such as the bus system, deserved more attention.

Residents said they hoped the plan could prompt a decrease in violence and boost specialized job training. Some noted that trash collection days have been skipped and that there's a paucity of parks and community resource centers in the neighborhood.

For the final question, residents pondered: "How can we successfully move from talk to action to get results from our neighborhood?"

"You gotta put things into action and just do it," Harris said.

The city brought on two police officers, Tony Parker and Scott Lenger*, to help implement the plan, and both attended the meeting. The officers visit the north neighborhood's schools and walk the streets, visiting with people and listening to them.

"I've always gotten outside of my car and walked around to hear people's stories," Parker said. "Building relationships with people is a type of policing that helps to solve problems."

Harris also commended the work of Cobbins and Hubbard. Cobbins doesn't do his work for attention, Harris said.

"He does it because he cares and does it for authenticity and love," he said.

Glenn Cobbins and Judy Hubbard, hired by the city of Columbia to learn what residents need to thrive, are cultivating relationships by knocking on one door at a time.