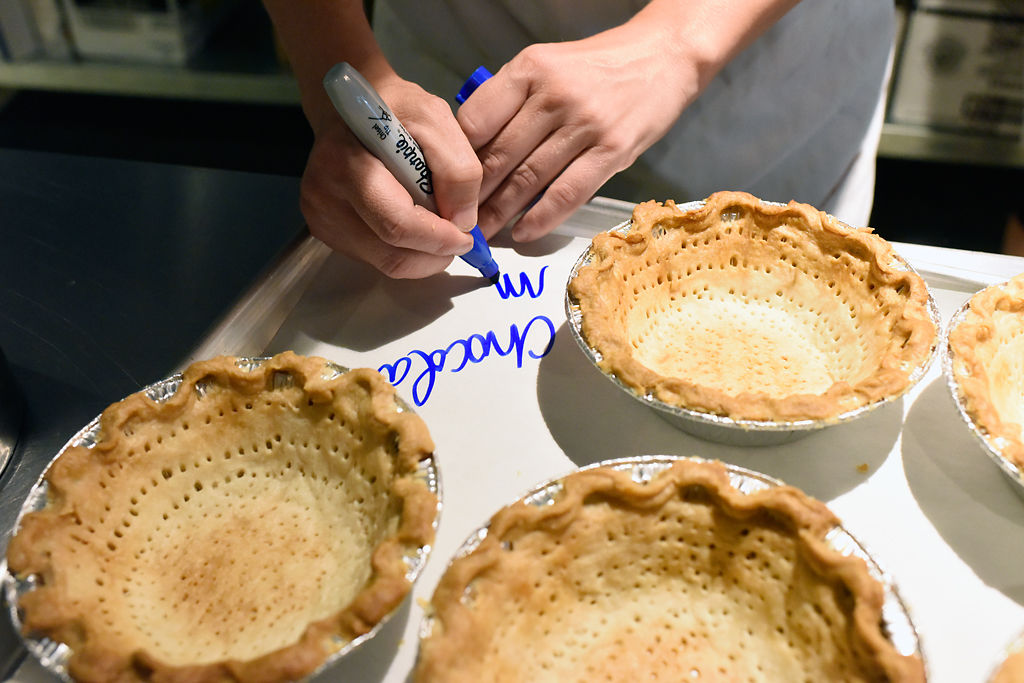 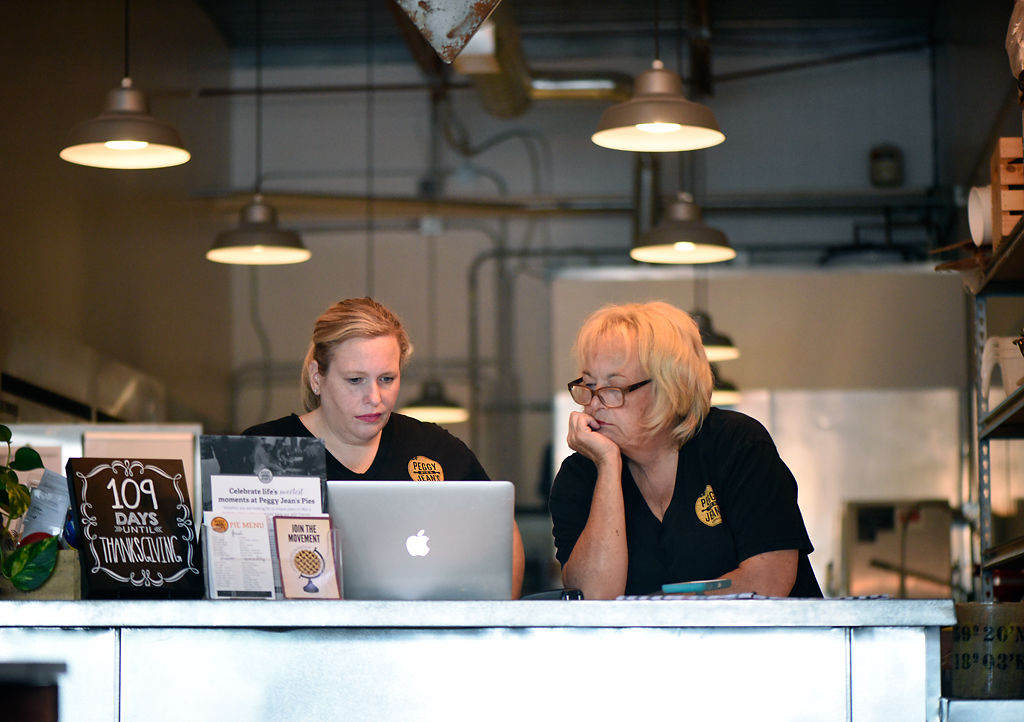 Co-owners Rebecca Miller, left, and Jeanne Plumley make plans for the day's baking schedule before the store opens on Thursday at Peggy Jean's Pies. Miller and Plumley are mother and daughter. 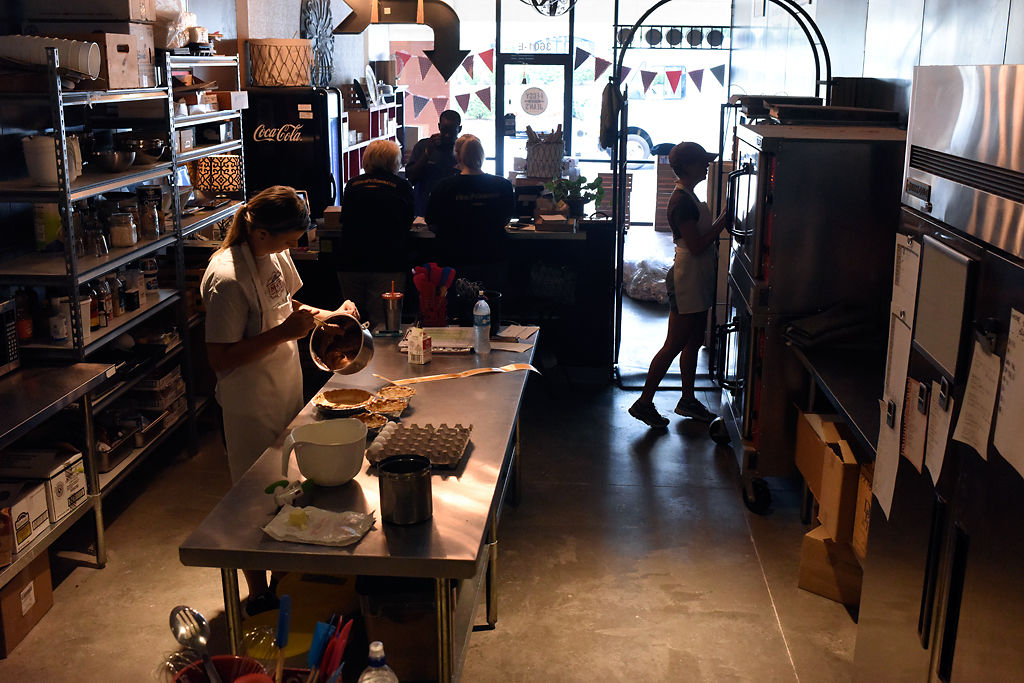 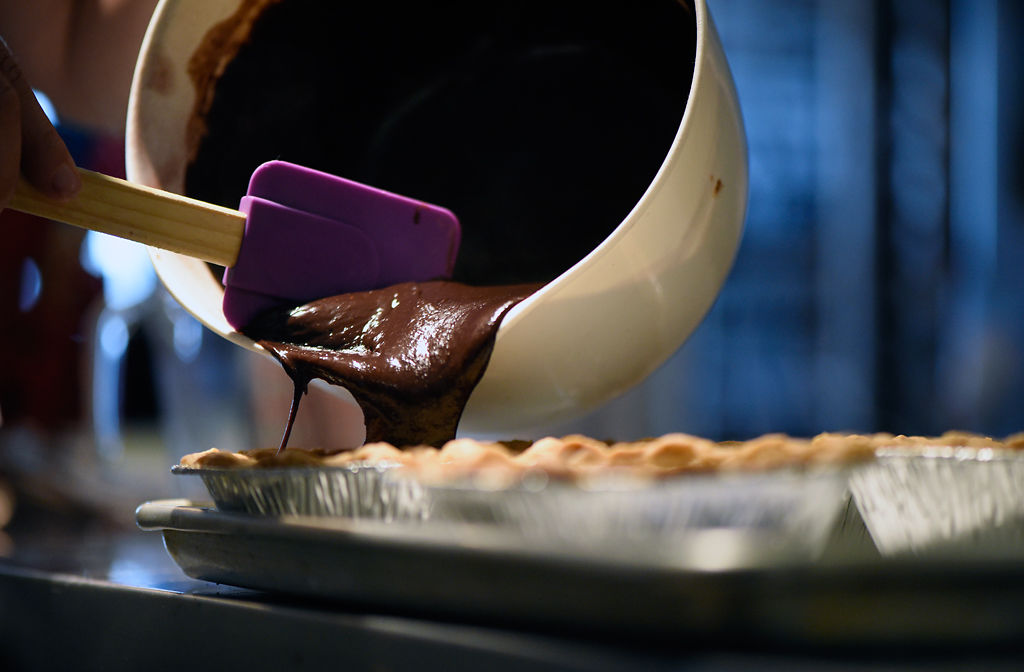 Bakery worker Emily Hansum scrapes chocolate filling into a pie before the store opens on Thursday at Peggy Jean's Pies. The team is planning for large orders of "moon pies" for the eclipse – pies with gram cracker, chocolate and marshmallow. 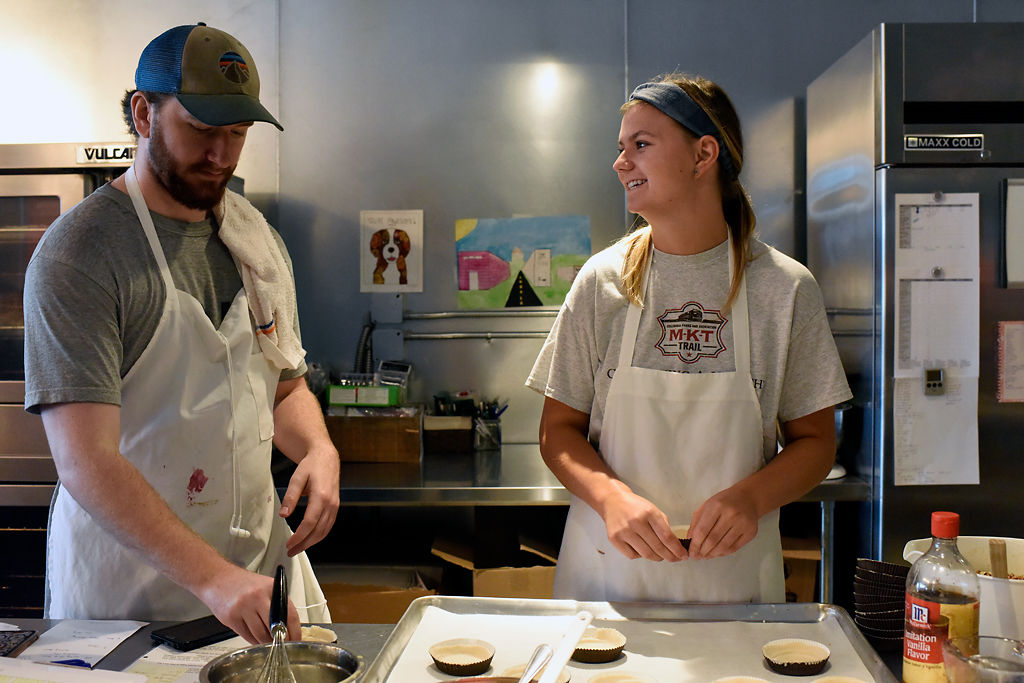 Bakery workers Mac Stubbs, left, and Katie Horton chat while pressing pie crusts on Thursday at Peggy Jean's Pies. The bakery uses only fresh ingredients that are never frozen or canned, according to the shop's website. 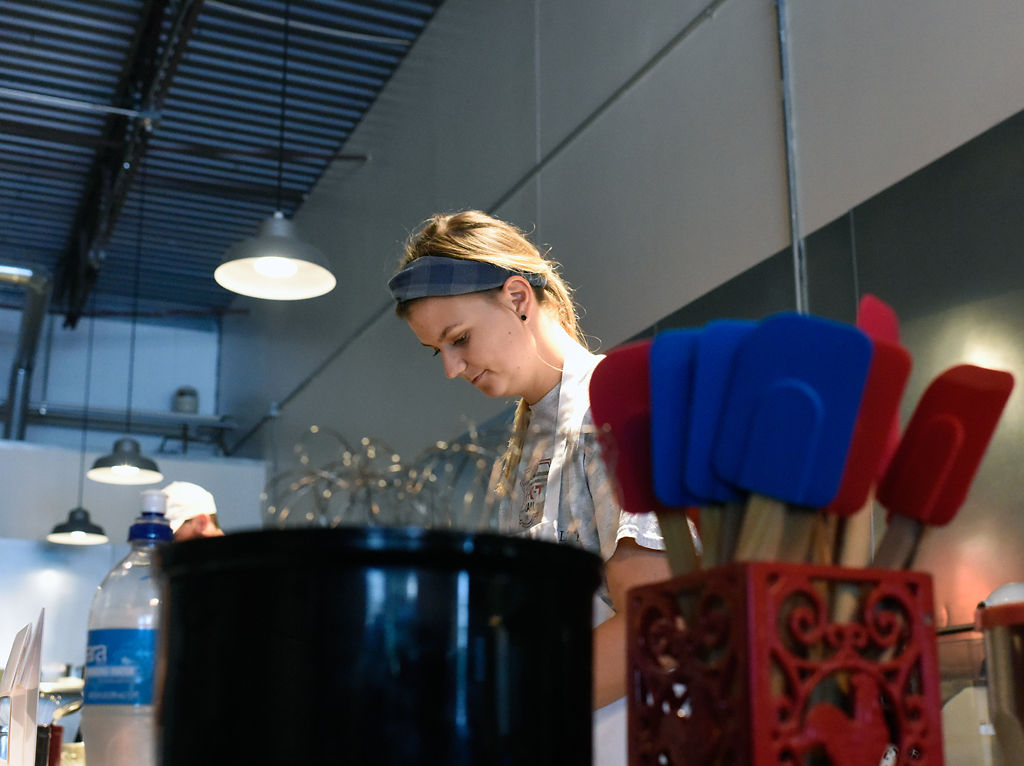 Bakery worker Katie Horton swirls the top of a pie on Thursday at Peggy Jean's Pies. 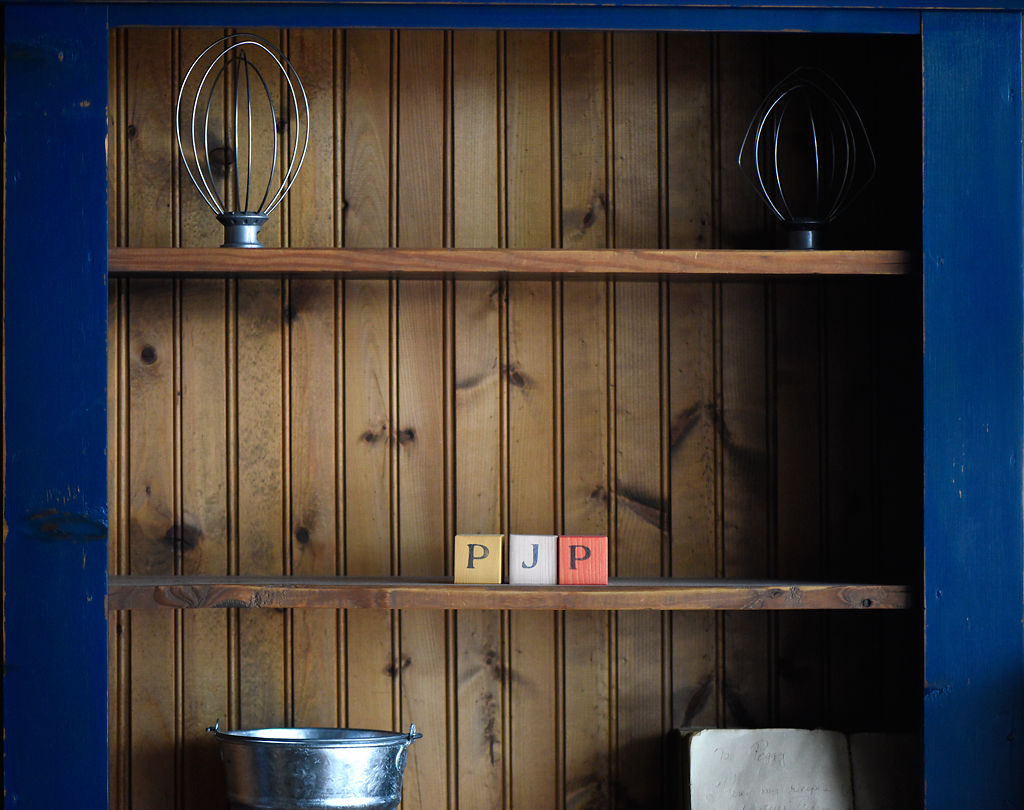 Blocks with the store's initials – PJP for Peggy Jean's Pies – sit on a display shelf in the storefront on Thursday.

Co-owners Rebecca Miller, left, and Jeanne Plumley make plans for the day's baking schedule before the store opens on Thursday at Peggy Jean's Pies. Miller and Plumley are mother and daughter.

Bakery worker Emily Hansum scrapes chocolate filling into a pie before the store opens on Thursday at Peggy Jean's Pies. The team is planning for large orders of "moon pies" for the eclipse – pies with gram cracker, chocolate and marshmallow.

Bakery workers Mac Stubbs, left, and Katie Horton chat while pressing pie crusts on Thursday at Peggy Jean's Pies. The bakery uses only fresh ingredients that are never frozen or canned, according to the shop's website.

Bakery worker Katie Horton swirls the top of a pie on Thursday at Peggy Jean's Pies.

Blocks with the store's initials – PJP for Peggy Jean's Pies – sit on a display shelf in the storefront on Thursday.

Rebecca Miller, co-owner of Peggy Jean's Pies, stood at the counter and pointed out the details of a package design on her laptop. The kitchen was bustling as the staff slid pies out of the ovens and shoved them onto cooling racks.

Meanwhile, Miller traced the lettering on the screen with her finger and patted a 9-inch pizza box sitting in front of her, explaining where each part of the design would fit.

"When people open the box and see the instructions, they'll know exactly what they're doing with the pie crusts," she said.

Peggy Jean's Pies, a Columbia pie company at 3601 Buttonwood Drive run by Miller and her mother, Jeanne Plumley, is set to sell its pie crusts in select Walmart stores. If all goes according to plan, Miller said, they're hoping the crusts will be ready to hit the shelves later in the year when everyone is baking for the holidays.

However, Walmart representatives haven't been able to tell them if the test store will be in Columbia or if the crusts will premiere in another city. Additionally, it's too early in the process to know how much money the crusts will cost, Miller said.

Peggy Jean's Pies originally opened in 1994, co-owned by Plumley and Peggy Day. However, after Day's death, Plumley closed the bakery. Ten years later, Plumley reopened the shop with her daughter. They did it by setting up a Kickstarter campaign in 2013 and raised $10,246 of their $10,000 goal.

This May, Miller read in the Columbia Daily Tribune that there was going to be an "Investing in American Jobs" open call event, where businesses could apply for the opportunity to meet with a product buyer from Walmart or Sam’s Club.

Out of the thousands of companies that applied, Peggy Jean’s was one of a small group chosen to attend a two-day meeting at Walmart headquarters in Bentonville, Arkansas, at the end of June.

They had exactly 20 minutes to explain to Walmart representatives that their pie dough was worth the investment.

"We were the very first people to go, so we got a little nervous," Miller said. "The whole thing goes so fast because there’s someone literally right outside the room waiting for their turn next. Literally, we were in the parking lot before either Mom or I realized what happened."

"It was a blessing we went first," Plumley added. "Man, we were pumped."

For their presentation, they came prepared with examples of what their package would look like, how they would package the crusts and how much each unit would cost. They even baked little tarts in their hotel room that morning for the representatives to sample, Miller said.

Usually, pie dough is sold rolled up into a log, but Peggy Jean’s is opting to package its two pre-made crusts in the pizza boxes. Initially, Miller said she and her mom were nervous because the packaging would take up more shelf space, but a Walmart senior buyer told them he loved the concept.

"The guy was like, 'We know you’re going for a certain kind of customer, one that’s sort of recognizing the quality of (the dough),'” Miller said. “There’s not a thing added to it, and it’s vegan-friendly.”

Miller sees their dough as the crown jewel of Peggy Jean’s products. Beyond being made with fresh, non-canned ingredients, their pie fillings are relatively standard, Miller said. Their dough, made with four basic ingredients, is what people come back for.

"This was exactly my grandmother’s recipe,” Miller said. "This is exactly how she made dough in, like, the 1930s. They lived in Broseley, Missouri, so these were things that were accessible to her and what she could use when they didn’t have hardly anything.”

“It’s not so much trying to corner the vegan market or anything,” Miller continued. “We thought, hey, we make this, people seem to really like this, and it has four things in it. Why not?”

Those four things are flour, water, salt and shortening. Even though it’s a simple recipe, Peggy Jean’s employees will not divulge how they turn those four ingredients into their popular dough.

Initially, there was concern about how they could keep the recipe under wraps if they had to expand production outside their kitchen, but Miller said it wouldn’t be a problem.

“I practiced law for 12 years, so I can still hammer out a confidentiality agreement,” Miller said, leaning over the counter. “One day, my mom just asked, 'Do you want to bake pies with me?' and I was like, 'That’ll be fun. I can do both.’”

Baking pies with her mom, however, turned into much more than a hobby.

“My husband and I were sitting in the car, and I’m crying because I’m trying to do this, I have clients, we have two kids, and even the dog is mad at me,” Miller recalled.

Her eyes crinkled up as she smiled at the pie tin she was holding. “I looked at him, and I said, ‘You know that law school debt we have? I’m totally gonna have to quit and bake pies with mom.’”

One morning, manning the counter at Peggy Jean's, she had been struck with the realization that this feeling in her chest was happiness, she said. There was just something about Peggy Jean's.

Last week, Miller and Walmart representatives worked out the kinks of the packaging process, and now Miller and Plumley are working on getting 12 samples sent out this week. They hope their test market will be near or in Columbia.

"I wouldn't mind flying out to California, though," Plumley added.

If the test market goes well, Peggy Jean's pie crusts will be introduced to more stores, and more crusts will have to be produced. A team of about a dozen people, including Miller and Plumley, will make and package the crusts at their bakery.

On Thursday afternoon, Miller and her mom stood behind the counter together, giggling and discussing the movie "My Big Fat Greek Wedding" between serving customers. They treasure the warm familiarity of the environment they've created at the bakery.

"It's important to me that this stays true to what it is," Miller said. "My goal is that, short of the name, people will not know that that is also going on. I don’t care if I’m selling 10 million a year, I don’t want any of this to change."

"In business, it's like growing up," Plumley explained, nudging Miller's shoulder. "You can't stand still."

The new location on Nifong is double the size of their current space, measuring 2,100 square feet.

Jeanne Plumley, the co-owner of Peggy Jean's Pies, said she's recovering nicely from a serious health issue and is grateful for the outpouring of love from the community.