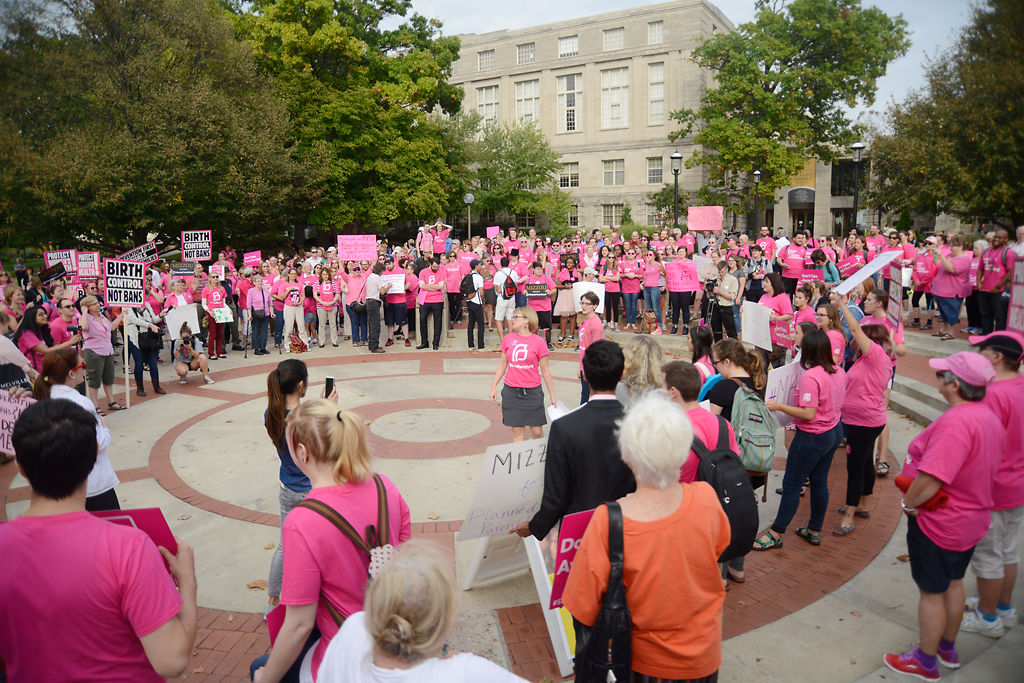 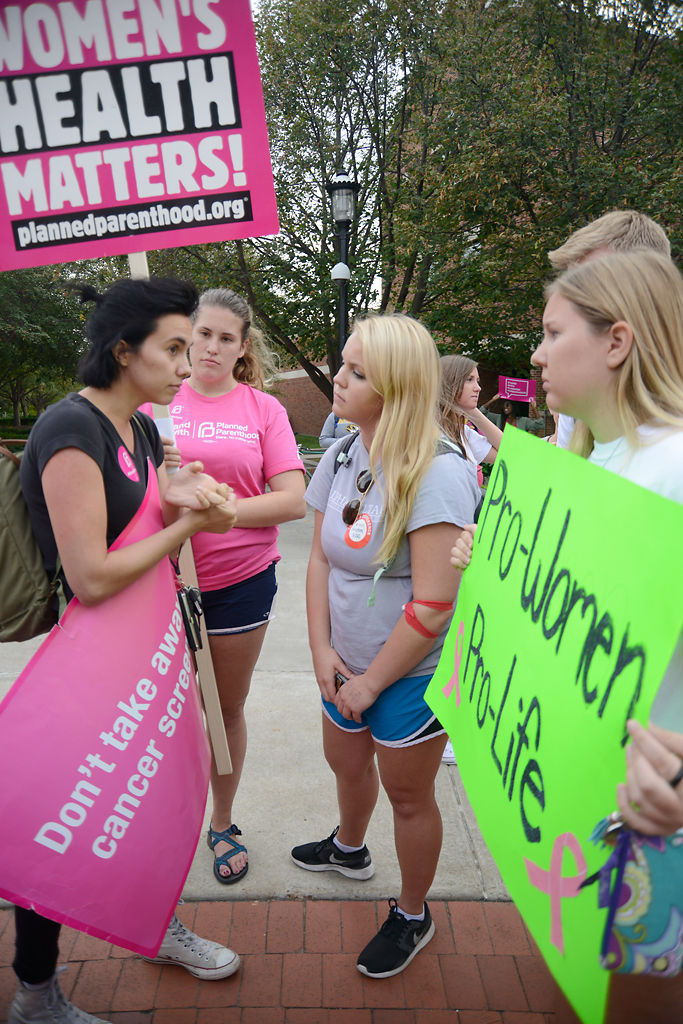 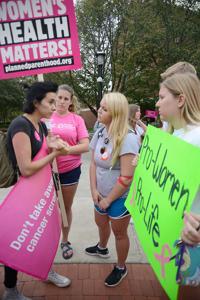 Carrie Davis, left, a sophomore at MU, shares her reasons for supporting Planned Parenthood while Bri McIntyre, Kristen Wood and Megan Huether listen to her explanation on Tuesday. 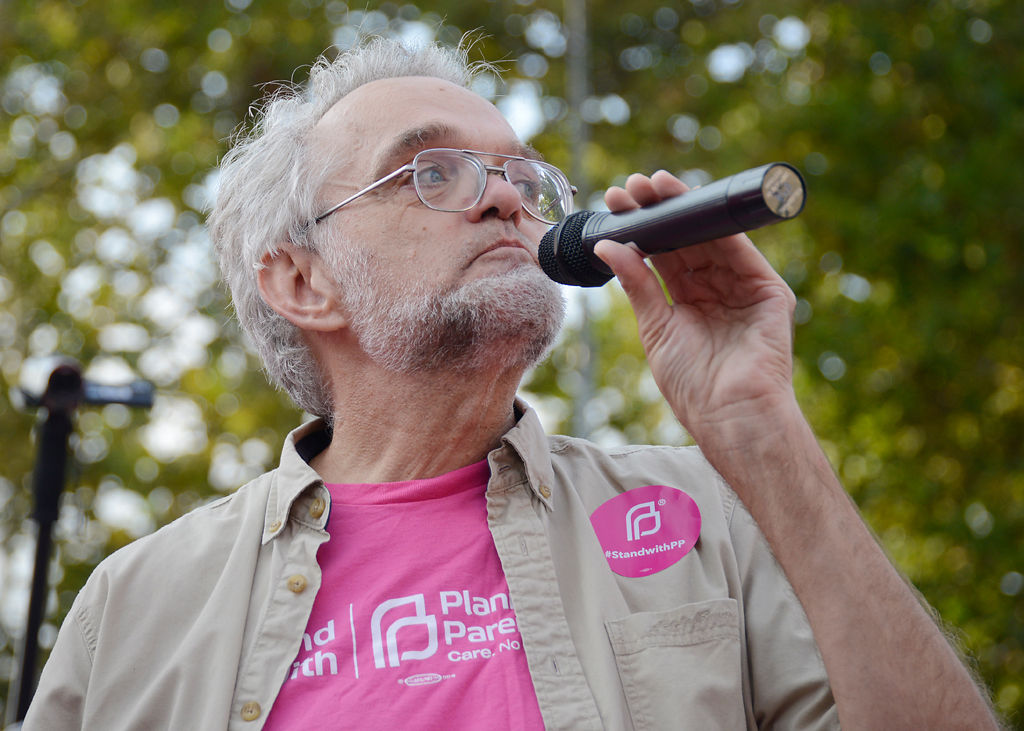 Phillip Wood, a psychology professor at MU, speaks during the Pink Out Day at Speakers Circle on Tuesday. He shared a personal story about how Planned Parenthood was able to help him and his wife during a complicated pregnancy when they were trying to have children.

Carrie Davis, left, a sophomore at MU, shares her reasons for supporting Planned Parenthood while Bri McIntyre, Kristen Wood and Megan Huether listen to her explanation on Tuesday.

Phillip Wood, a psychology professor at MU, speaks during the Pink Out Day at Speakers Circle on Tuesday. He shared a personal story about how Planned Parenthood was able to help him and his wife during a complicated pregnancy when they were trying to have children.

COLUMBIA — Protesters in pink T-shirts packed Speakers Circle on Tuesday evening during a rally and called on MU to reinstate its recently severed relationships with Planned Parenthood.

“Not Mizzou, not the state, women must decide their fate,” the crowd chanted.

The gathering was part of “Pink Out Day,” a national demonstration organized by Planned Parenthood, which stemmed from recent controversy surrounding the health care provider that has been debated in Congress, in the Missouri legislature and in public opinion. The organization has recently been investigated in connection with its abortion procedures and handling of fetal tissue.

Supporters of the organization traveled from St. Louis and Kansas City to join residents in Columbia, which was one of 15 anchor sites in the nation for Planned Parenthood’s Pink Out Day. Ten speakers, including Missouri state Reps. Stacey Newman and Stephen Webber, criticized legislative efforts to investigate Planned Parenthood and cut the organization’s ties to MU.

“I am done with the misogyny in the state capitol,” Newman said.

• To restore hospital privileges for the only Planned Parenthood doctor legally allowed to perform abortions in Columbia;

• To reinstate contracts between Planned Parenthood and MU’s medical and nursing schools;

• To stop investigations into Planned Parenthood.

Protesters spoke out against state Sen. Kurt Schaefer, R-Columbia, who is leading the Missouri legislature’s Senate Interim Committee on the Sanctity of Life. According to previous Missourian reporting, MU Chancellor R. Bowen Loftin asked MU Health Care to review its privileging policies at the request of the state committee and members of the public.

Laura McQuade, president and CEO of Planned Parenthood of Kansas and Mid-Missouri, attended the event and criticized Schaefer and the committee for urging the university to stop its relationships with Planned Parenthood.

“Sen. Schaefer has been pretending to serve the people of Missouri,” McQuade said.

McQuade also criticized Loftin, saying that he caved to “political pressure” to cut ties between the university and Planned Parenthood.

“You (Loftin) made the wrong decision,” she said. “We are going to turn up the heat on you so far you’re not even going to know what hit you.”

Michelle Hall, a Columbia resident who attended the rally, said Planned Parenthood has provided life-saving procedures, like cancer screenings, for members of her family.

“Without Planned Parenthood, I’d have lost half my family," Hall said.

She said she was disappointed that MU had ended its relationship with the Columbia Planned Parenthood clinic.

“I’m not happy with Mizzou’s decisions — the fact that they’re siding with politicians,” she said, adding that Missouri legislators are "destroying a safety net that a lot of people still depend on."

“People didn’t want to even hear what we had to say, and it just kind of makes me sad because we’re just out here arguing for life,” said Skyler Roundtree, an MU student who protested the rally.

Planned Parenthood does not have the ability to take legal action against the university at this time, McQuade said. But the organization may file a federal complaint with the Department of Health and Senior Services against MU Health Care.

McQuade said Planned Parenthood will seek other options for hospital privileges, including privileges at Boone Hospital Center, for Colleen McNicholas, an obstetrician-gynecologist who started providing medical abortions at the Columbia Planned Parenthood clinic on Aug. 3.

The Sanctity of Life Committee was formed in July after a sting video allegedly showed a Planned Parenthood representative selling aborted tissue. The video has since been widely discredited for having been edited to distort the representative’s conversation.

The Missouri attorney general’s office found that Planned Parenthood offices in St. Louis, the only offices that provided abortions in the state at the time the video was released, did not violate any laws in its disposal of fetal tissue, according to a report released on Monday.

The Sanctity of Life Committee will continue its separate investigation despite the attorney general's findings, Schaefer told the St. Louis Post-Dispatch.

2005: Planned Parenthood of Kansas and Mid-Missouri and the MU School of Medicine agree to allow MU medical residents to learn how to perform abortions.

2011: The agreement between Planned Parenthood and MU expires. It had not been used since 2010.

Aug. 25: The Senate committee alleges that Kristin Metcalf-Wilson, a nursing professor at MU and the lead clinician at Planned Parenthood of Kansas and Mid-Missouri, recruited McNicholas to perform abortions at the Columbia Planned Parenthood clinic.

Sept. 15, 2015: The Senate committee claims that McNicholas' "refer and follow" privileges are not valid.

Sept. 24, 2015: MU Health Care announces McNicholas will lose her hospital privileges by the end of the year.

Sept. 24, 2015: Planned Parenthood announces it will file a claim with the Missouri Department of Health and Senior Services against MU Health Care for allegedly violating the Church Amendments.

Sept. 28, 2015: The Missouri attorney general's office announces Planned Parenthood did not break the law in its disposal of fetal tissues.

Dec. 1, 2015: McNicholas will lose her hospital privileges, preventing her from performing abortions.

Koster finds no illegal activity in investigation of Planned Parenthood

The attorney general's office tracked each tissue specimen from the 317 surgical abortions performed in June by Planned Parenthood of the St. Louis Region and Southwest Missouri clinic.