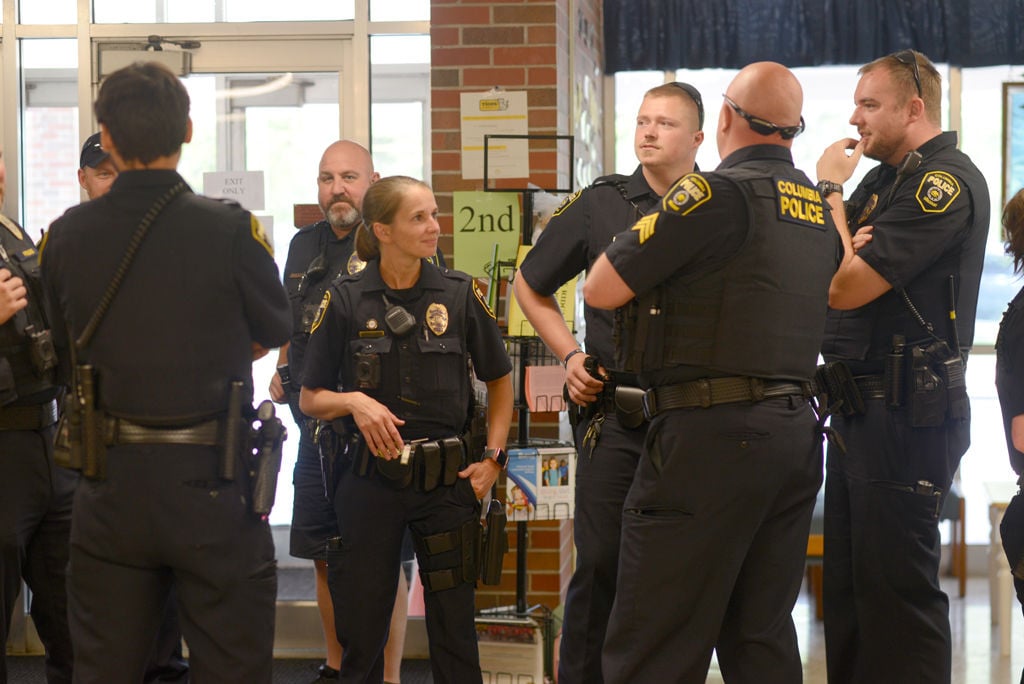 Columbia Police officers talk inside after finishing a visit during police week on May 16 at Blue Ridge Elementary School. 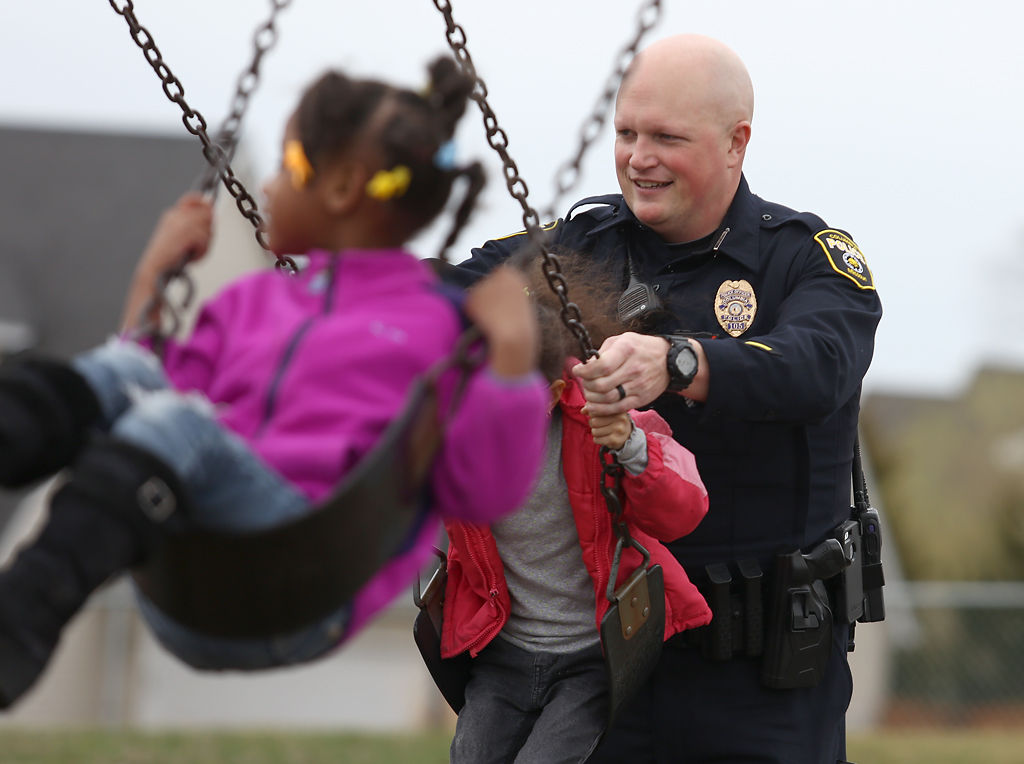 Columbia Police Officer Scott Lenger gives a student a push on the swings on March 10, 2016, at Derby Ridge Elementary School. Lenger and his partner, Tony Parker, make frequent trips to the school to spend time with students as members of the Community Outreach Unit. 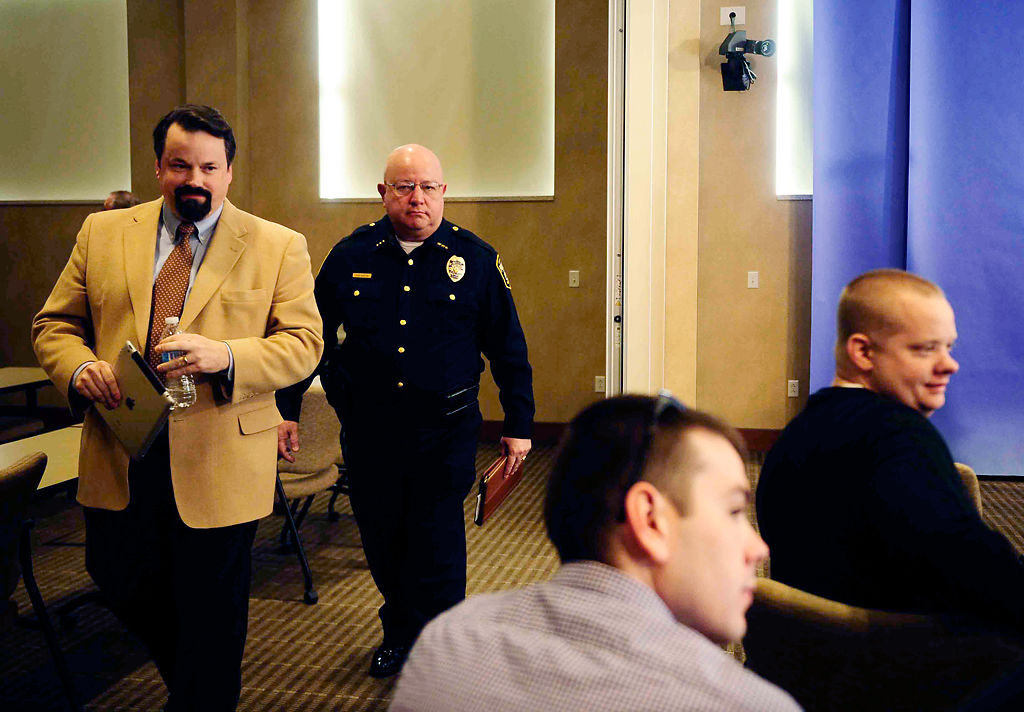 City Manager Mike Matthes, left, and Columbia Police Chief Ken Burton enter a conference room on March 6, 2012, at the Daniel Boone City Building. Both were singled out for their lack of leadership in a survey of police officers.

Columbia Police officers talk inside after finishing a visit during police week on May 16 at Blue Ridge Elementary School.

Columbia Police Officer Scott Lenger gives a student a push on the swings on March 10, 2016, at Derby Ridge Elementary School. Lenger and his partner, Tony Parker, make frequent trips to the school to spend time with students as members of the Community Outreach Unit.

City Manager Mike Matthes, left, and Columbia Police Chief Ken Burton enter a conference room on March 6, 2012, at the Daniel Boone City Building. Both were singled out for their lack of leadership in a survey of police officers.

The responses in the surveys have been edited for clarity for this article.

The responses to the survey, which was conducted in 2016, were released Wednesday after the city lost a fight for the public records. While the tenor of the responses was downbeat and critical, the head of the police officers’ union said it’s hard to know if current officers feel the same way as the Columbia Police Department has hired many new officers since then.

However, at least four of those who responded to Matthes’ survey still work at the department, said Dale Roberts, the executive director of the Columbia Police Officers’ Association.

Roberts said, so far, the responses to Matthes’ survey have been consistent with his own survey.

Low morale has been a chronic problem for the department. A 2012 independent review found a lack of communication between officers and their superiors and a culture “approaching toxicity.”

Matthes’ office denied the request, saying the surveys contained identifying information. The association then sued the city to get the surveys — and won. In May, a judge ruled the city violated the Sunshine Law and the city was ordered to hand over the responses. On Wednesday, the city waived its right to an appeal and released the survey responses.

The city sent the complete, unredacted responses to the association and news outlets with officer names and at least one cell phone number. In the survey responses posted on its website, the Missourian has redacted that information out of respect for privacy.

Steven Sapp, the city spokesman, and Matthes could not be reached for comment in multiple attempts Wednesday.

In the 30 responses, only 12 contain answers to the questions, and 18 of them simply say to ask the officers’ association for the answers.

Aside from the leadership issue, other grievances often cited in the surveys were the 12-hour work days, lack of trust and support from superiors, dislike of the community outreach program and dislike of the practice of drafting officers to work on days off.

But, not all responses reflected serious worries. Two officers stated they thought being able to grow beards would help lift morale.

“A big [morale lifter would be] beards. Allow a trial run through December after ‘no shave November’ and evaluate.... Certain officers have a good plan for this.”

One of the most common criticisms focused on the leadership in the police department and the city, specifically Police Chief Ken Burton, other department managers and Matthes.

“Mike Matthes hit the nail on the head in the shift meeting,” an officer wrote. “He said, ‘I don’t know most of you and don’t expect you to trust me.’ Well I do not trust him, so he is right.... Additionally, it isn’t hard to see why the City Manager’s office has the highest employee satisfaction rating. If I received every weekend off, every holiday off, and only worked 8-5, then I’d be skipping around the office.”

Another officer wrote that many are left out of the loop in the department.

“Some of us do not have the privilege of attending shift meetings,” the officer wrote, “and the supervisors DO NOT PASS any information along, so we are constantly in the dark about things, or we hear about them through the rumor mill ... Some coworkers (who are not very busy and can go around and gossip) know or hear about the inner workings and think they know what is going on, and then they bully the other coworkers with their knowledge or lack thereof. Believe it or not, there is a lot of bullying that goes on, even from superiors.”

Another said trust must be rekindled between officers and their superiors.

“To re-establish trust between rank and file officers, Command staff, and City Manager Office they must stand up for the officers instead of throwing us under the bus before an investigation even begins,” the officer wrote.

One officer asked for Burton and Matthes to stop chastising the department and the CPOA in the media. Even at a meeting about starting over and rebuilding trust, the sarcasm was obvious, the officer wrote.

“We appreciate the comments about caring for us, yet your actions speak louder than words. For example, the protests outside our building and the decision to fire (Rob) Sanders and the way it was handled,” the officer said.

Matthes and Burton joined a group of protesters outside the Columbia Police Department in 2015 after the CPOA posted on Facebook declaring “Darren Wilson Day” one year after the Ferguson Police officer shot and killed Michael Brown, an unarmed, black teenager.

“I understood all were upset with CPOA director actions (as was I), but this action spoke to officers you were with the (protesters) and not us,” wrote one officer, who referred to the protesters as an “anti-police group.”

Burton fired Sanders from the police department in 2011 after he fractured the spine of a man police were detaining. Sanders has been fighting his firing ever since.

Dislike of the 12-hour shift

The majority of officers who actually answered the survey questions expressed dislike for 12-hour shifts. Only two officers spoke in favor of retaining the schedule.

“If the 12 hour shift operated as it was supposed to operate,” one wrote, “I would not have any issue with it…. However, with the high call volume and limited resources, all of our time is spent trying to handle the calls for service.”

“I think this 12-hour schedule is killing morale and work performance,” another responded. “12 hours is way too long to work (while) short of staff and call volume.”

A few officers also protested the “drafting” policy in which officers are asked to come to help with security for events.

“If we’re going to be forced to come in on our day off,” said one officer, “it should be for a legitimate reason such as a major event or critical emergency.”

The officers were also not happy with the lack of pay increases from year to year. Many officers in the surveys stated they were not making enough money.

“For (2017), I will be making less money than I did in (2016). The cost of insurance for me and my family increased at a rate that was not covered by the $.25 cost-of-living increase. It’s never good when our net pay drops from year to year,” one officer wrote.

“The officers who have been here for 10 years only make a few cents more than brand new officers,” another responded. “This hurts retention at our department. Officers don’t get any performance pay increase either, (which is usually) based on extra duties, education incentive or high evaluations.”

There were only three complaints from officers who answered the surveys about the Community Outreach Unit, which focuses on community policing.

“As patrol officers are trying to keep their heads above water, the COU is barbecuing, dancing on social media, and doing other non-law enforcement related activities,” an officer wrote.

Another said, “we are cops, not entertainers” in reference to videos of officers dancing that the department posted on social media and YouTube.

A tax for police pay?

“I do not support property tax increase, but I would support sales tax, which is across the board and fair to all of the members of the community,” an officer wrote.

A court ruled that the City of Columbia must turn over public records to the Columbia Police Officers Association.