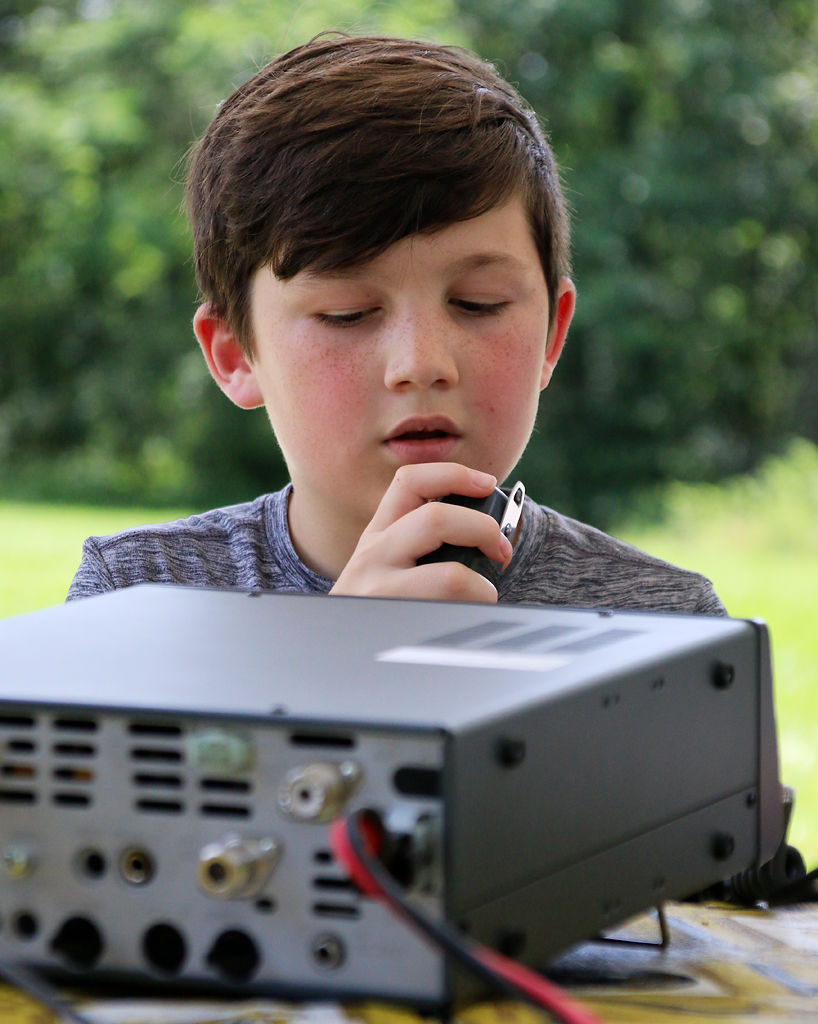 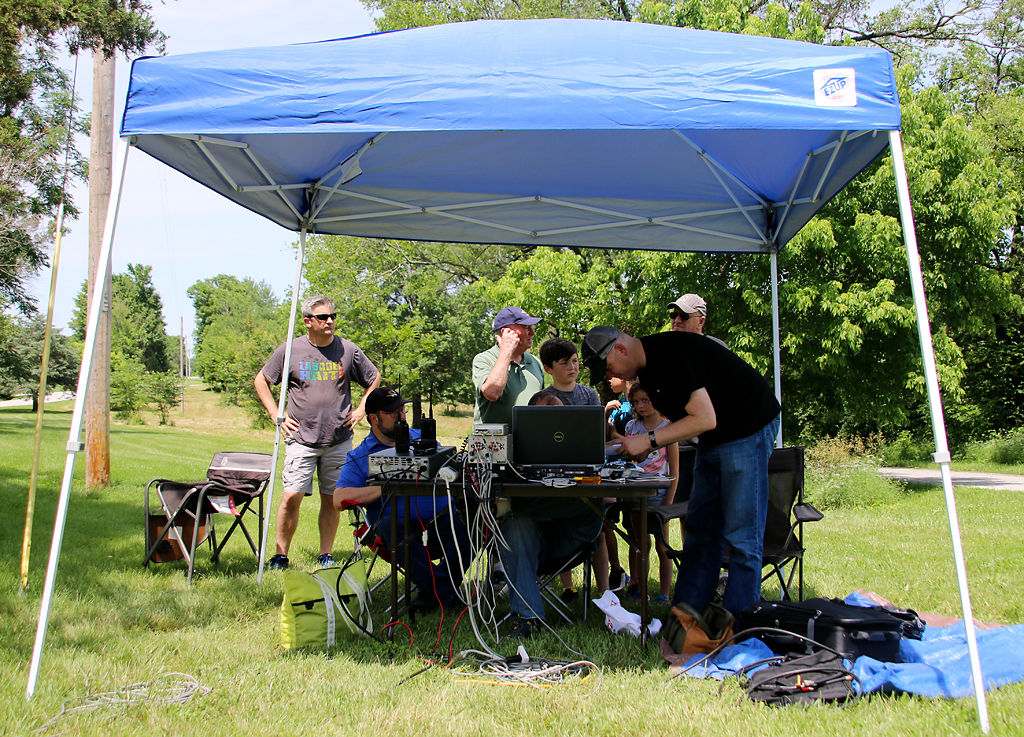 Visitors gather around satellite-monitoring equipment at an amateur radio field day exercise Saturday at Rock Bridge State Park. At this station, radio amateurs used interactive maps and other codes to communicate with satellites orbiting around the planet. 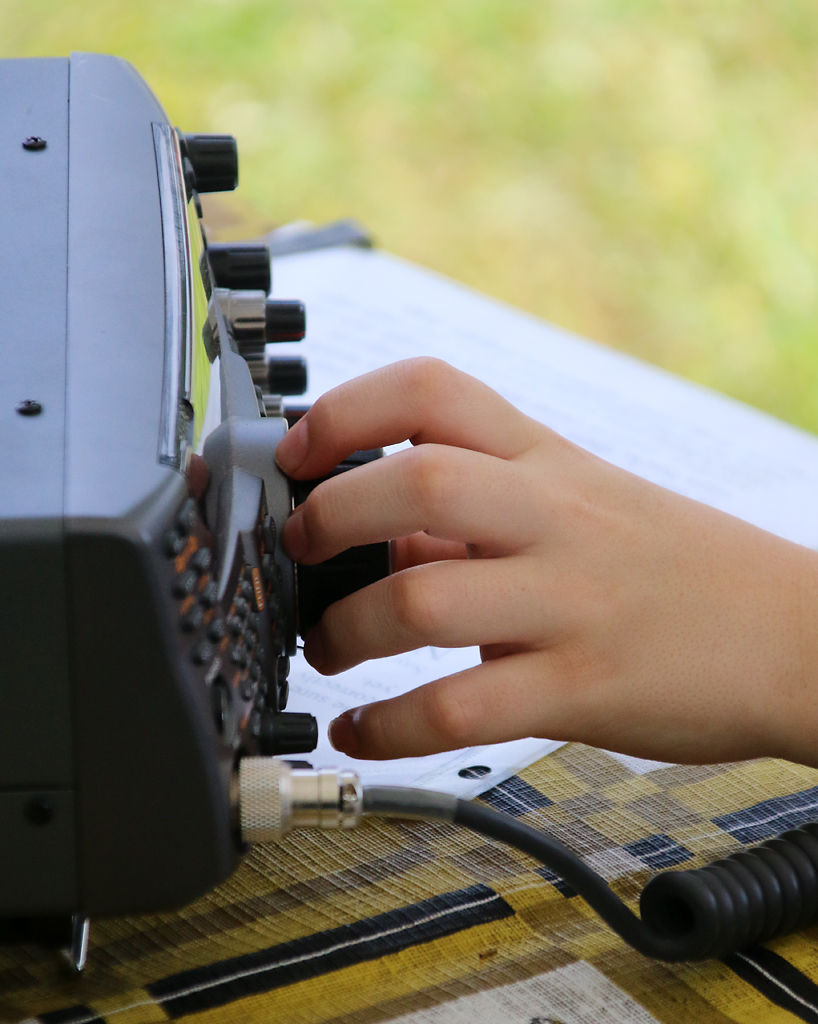 Visitors gather around satellite-monitoring equipment at an amateur radio field day exercise Saturday at Rock Bridge State Park. At this station, radio amateurs used interactive maps and other codes to communicate with satellites orbiting around the planet.

An earlier version of this story incorrectly stated that the American Radio Relay League offers radio licensing to amateurs. The Federal Communications Commission is the organization that offers the licenses.

During a natural disaster, those on the final lines of defense are often equipped with ham radios.

“Amateur radio is the one means of communication that’s going to work when nothing else does,” Central Missouri Radio Association spokesperson Chris Swisher said.

Amateur radios, also known as ham radios, function outside the bounds of internet or cellphone infrastructure, making them key during communication outages.

Testing this fail-safe is one of the reasons thousands tuned in Saturday and Sunday for the American Radio Relay League’s nationwide field day exercise.

During this exercise, more than 35,000 people across the country — including a group at Rock Bridge State Park — used ham radios to make contact with as many other operators as possible, according to the organization.

“We try to get as many of those contacts done in as many different forms of communication that we can accomplish for 24 hours,” Swisher said.

One of the three stations set up in Rock Bridge Memorial State Park focused on finding and connecting to certain satellites in orbit around the planet. At the other two tables, registered radio amateurs read out call signs and other codes over the airwaves, marking down what they heard in response.

Throughout the weekend, operators showed observers how to use the radio systems. Whether they involved Morse code or the NATO phonetic alphabet, each system required some decoding to understand and explain to curious visitors.

For some at the event, amateur radio is simply a fun pastime. For others, it’s a lifesaving measure.

The Amateur Radio Emergency Service, a subset of the league, focuses specifically on disaster preparation and communication.

Tim Spurgeon is the president of the Boone County Amateur Radio Emergency Service, or BCARES. He first got involved with amateur radio four years ago, when he realized his disaster preparation kit lacked proper communications technology. Now, he acts as both a radio operator and an advocate for proper disaster preparedness.

Spurgeon noted that ham radio can cause more harm than intended if not used with the proper organization. He cited the response to the 2011 Joplin tornado as a prime example.

“We had hundreds of ambulances show up,” Spurgeon said. “It actually blocked the road from getting resources into Joplin to help out. A typical common knowledge among BCARES would be you don’t report to any emergency unless you’re invited.”

Spurgeon is a licensed Amateur Extra radio operator, which is the highest class of license offered by the Federal Communications Commission. All amateur radio operators must be licensed according to FCC rules, and the Central Missouri Radio Association offers monthly certification tests to its members.

These certifications effectively organize radio operators, Spurgeon said, bringing “order back to the chaos of emergency.”

“There’s a lot of fun involved,” Spurgeon said. “And then there’s also a lot of tedium or boredom. In actual emergencies, you don’t talk much. You listen a lot.”