Hunters had killed 107,564 whitetail deer by Tuesday evening, including 80,525 deer during the opening weekend of firearms deer season, according to preliminary data from the Missouri Department of Conservation.

The November portion of firearm deer season began Saturday and will continue through Nov. 24. The opening weekend typically accounts for about a third of the total deer taken during the hunting season.

This weekend, poor weather made things difficult for hunters. Rain on Saturday and heavy winds Sunday — especially during peak hunting times in the morning and at dusk — kept the number of deer killed down. 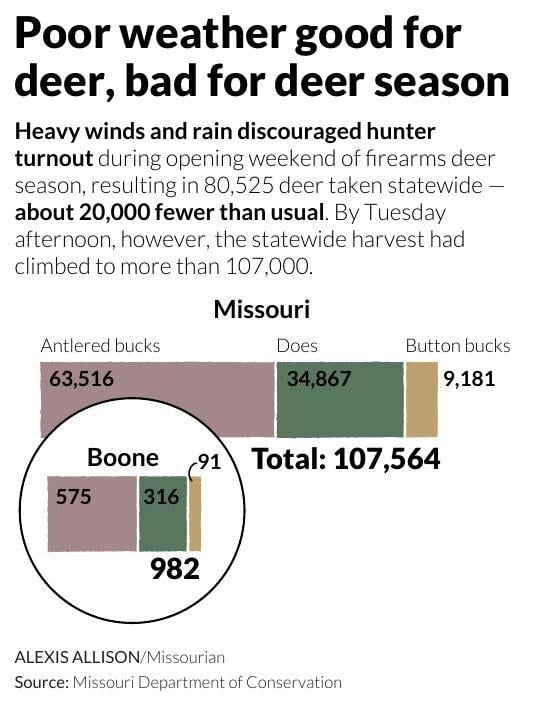 Last year, hunters harvested 88,670 deer during the opening weekend of the November portion of the firearms season. Even that was fewer than usual. On average, opening weekends see around 100,000 deer killed, Adam Doerhoff, Boone County conservation agent, said.

Better weather could give hunters the opportunity to reach their goals. Doerhoff promoted deer hunting as an excellent source of meat, a bonding experience for families and an excellent method of controlling Missouri’s whitetail deer population, which before the season was estimated at 1.4 million.

“Whether you hunt or not, hunting is very important,” Doerhoff said. “Regulated hunting is the single best wildlife management tool we have, particularly for deer. So it’s very important we have deer hunters hunting when done responsibly.”

Finding bullets, though, has proved a challenge.