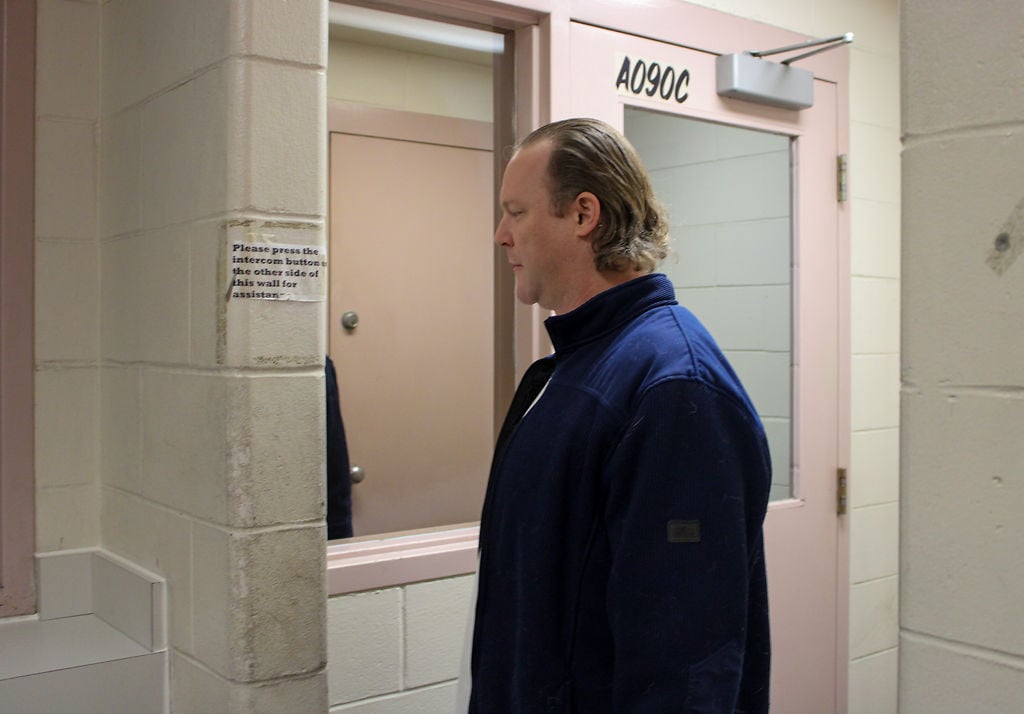 Seth Reynolds checks in Friday at the Boone County Jail. He has spent more than 170 nights in jail while being in contempt of the county court for failing to remove property from the county’s right-of-way. 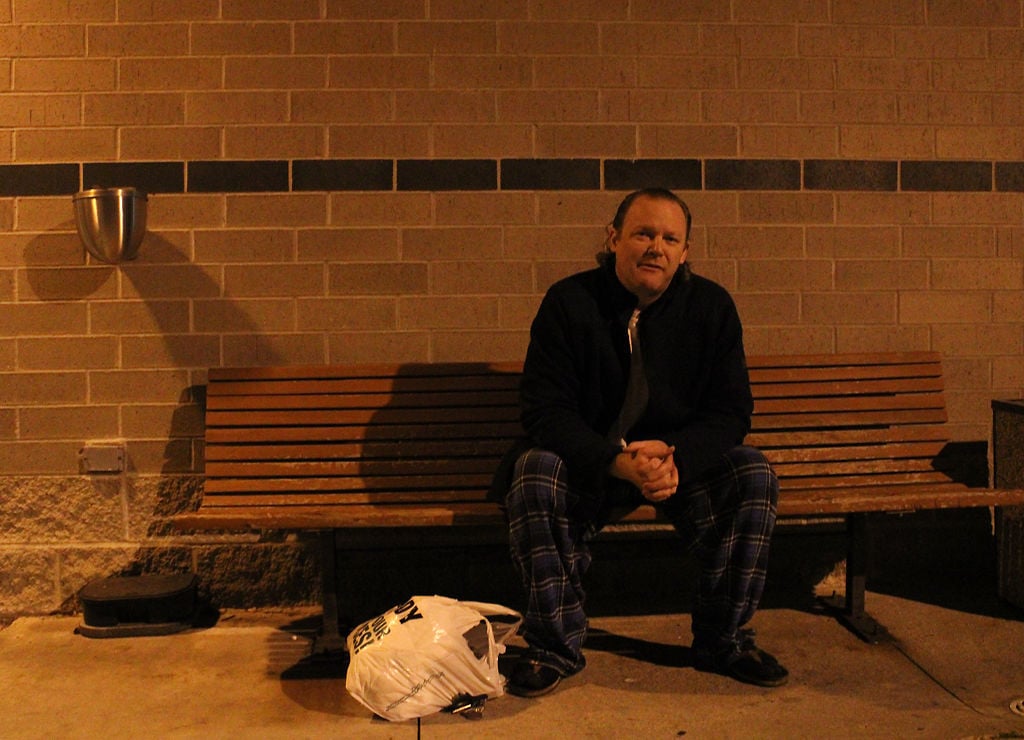 Seth Reynolds waits on a bench Friday outside the Boone County Jail. The county has ordered him to report to the jail on nights and weekends for failing to demolish a shed he built that encroaches two feet onto county right of way along Creasy Springs Road. 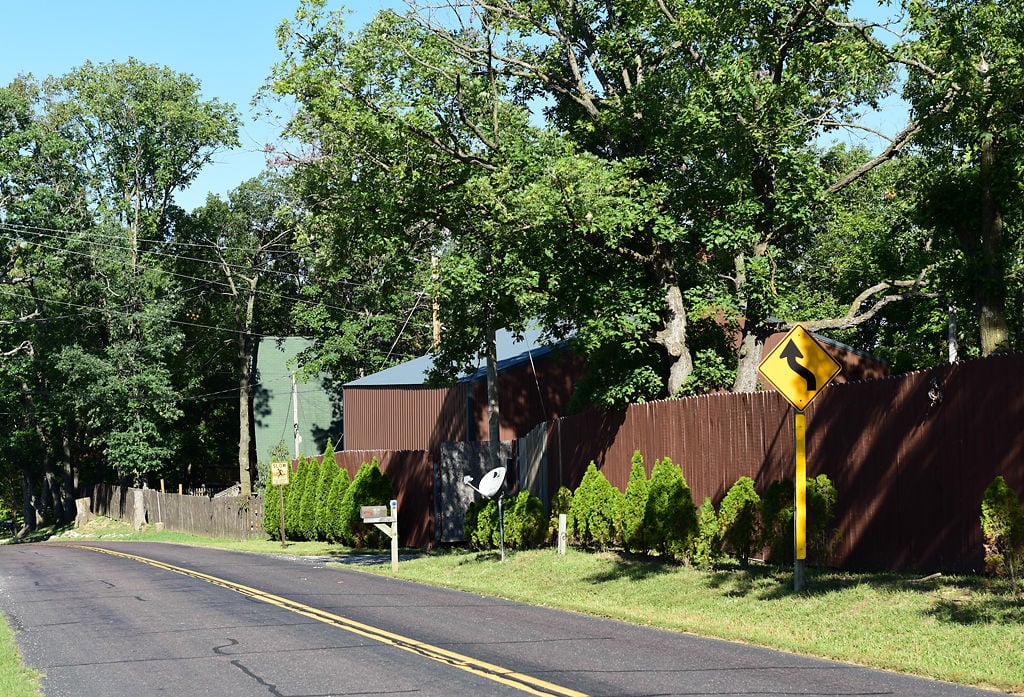 Seth Reynolds checks in Friday at the Boone County Jail. He has spent more than 170 nights in jail while being in contempt of the county court for failing to remove property from the county’s right-of-way.

Seth Reynolds waits on a bench Friday outside the Boone County Jail. The county has ordered him to report to the jail on nights and weekends for failing to demolish a shed he built that encroaches two feet onto county right of way along Creasy Springs Road.

Seth Reynolds, who’s been held in contempt of court for failing to remove a waste oil shed, a fence and a satellite dish from the Boone County right of way along Creasy Springs Road, has spent about 170 nights in the Boone County Jail as a result.

The situation is such that retired Circuit Judge Gary Oxenhandler in September offered to step in and mediate for free in search of a solution. That, however, never happened, in part because County Counselor CJ Dykhouse insisted that mediation would be impossible without the precondition that Reynolds’ shed, fence and satellite dish be removed in their entirety from the right of way.

“That is what the Court has ordered, and that is not something that anyone is interested in re-litigating,” Dykhouse wrote in a Sept. 17 email. “If we are agreed from the outset on the goal and the task is means and methods, it may be productive to meet in a mediation setting.”

Wyse agreed in that thread to mediation but said the county’s precondition was unacceptable given that Reynolds can’t afford to comply.

Oxenhandler, who declined to talk with the Missourian, was displeased in the email.

“I continue to be willing to mediate this matter without fee (as I am concerned that little public good is being served by the current fight),” he wrote. ... “I must agree that the preconditions suggested take the breath out of any chance of a mediated resolution. Just agree to mediate. If no accord is reached, what’s lost? Nothing? Advise.”

After recycling the same arguments for three days, Oxenhandler conceded that it didn’t appear the parties were able to agree on mediation. The attorneys continued their back-and-forth well into October, until Oxenhandler sent a final message: “Stop!!!! Let’s find a near date.”

“Gary – good morning,” he wrote. “I apologize you were brought back into this email exchange even though we had resolved the mediation suggestion. You can stand down. Thanks.”

Reynolds built his shed in 2013 and used it to recycle used oil from restaurants. Although the county issued him a building permit, it also advised he would need to seek a variance because it encroached on county right of way. That variance never came, and the county pushed for a permanent injunction in 2015 to force the shed’s removal.

Boone County Circuit Judge Jodie Asel sided with the county and ordered Reynolds to take down the shed. Wyse took the case to the Western District Court of Appeals, which upheld Asel’s ruling and chided Reynolds for lying in circuit court about whether he had an outstanding mortgage on his property.

Now, Reynolds is free to run his business, Eye Candy, on weekdays. At night and over the weekends, however, he must report to the Boone County Jail, where he stays in a holding cell.

“The county is being harmed by the continued incarceration of Reynolds,” Wyse said. “The taxpayers, the jail employees and the administration all have to foot this bill.”

Dykhouse, however, argues that Reynolds has full control over his incarceration.

“The price is negligible,” Thompson said. “The county doesn’t even track the cost because it would so incremental.”

Because Reynolds reports to the jail at 8 every night and leaves at 6 every morning, Thompson says the staff that monitors him would have to be at the jail anyway.

“We don’t dress him out. He’s in his regular clothes,” Dykhouse said. “There are no medical expenses, and he’s out before breakfast.”

Dykhouse also disputes Reynolds’ suggestion that removing the shed, the fence and the satellite dish would be too expensive. The pole holding the satellite dish upright could be removed easily with a spade shovel, and yet it stays in the ground. He said it also would be easy and cheap to take out the fence.

Regarding the shed, Dykhouse said Reynolds has testified that “a group of Amish men” was hired to build it but that Reynolds says the group is not properly insured to take it down.

“I’m interested in solutions, but this lack of action makes it very clear that nobody is taking this seriously,” Dykhouse said.

Reynolds, however, says the court’s ruling is ridiculous and based on slanderous arguments supported by fraudulent documents.

Also at issue is a drawing of Reynolds’ property that was submitted as evidence in court. Wyse said the “drawing” was submitted as a survey and does not comply with state statutes. Transcripts from the Western District Court of Appeals indicate that professional surveyor Matthew Thomas confirmed he made the drawing, and it was admitted into evidence with no objection from Tom Schneider, who was representing Reynolds at the time.

Wyse asserts the document is a fraudulent survey. Dykhouse called that a straw man argument through which Wyse is trying to convince people the drawing is an official survey so Wyse then argues it doesn’t comply with state law.

“The claims of fraud are baseless and without merit,” Dykhouse said.

Wyse asserts there is no development the county could do in its Creasy Springs right of way that would be affected by Reynolds’ shed, fence and satellite dish.

“The county has been completely unreasonable,” he said. “It’s purely punitive. They do not want their authority questioned.”

Reynolds said the ordeal is taking its toll.

“These claims are slanderous and have impacted my life, my business and my ability to go about my life.”

Seth Reynolds previously spent nine days in jail after being found in contempt of court for failing to remove the garage, fence and satellite dish that he had put in place.