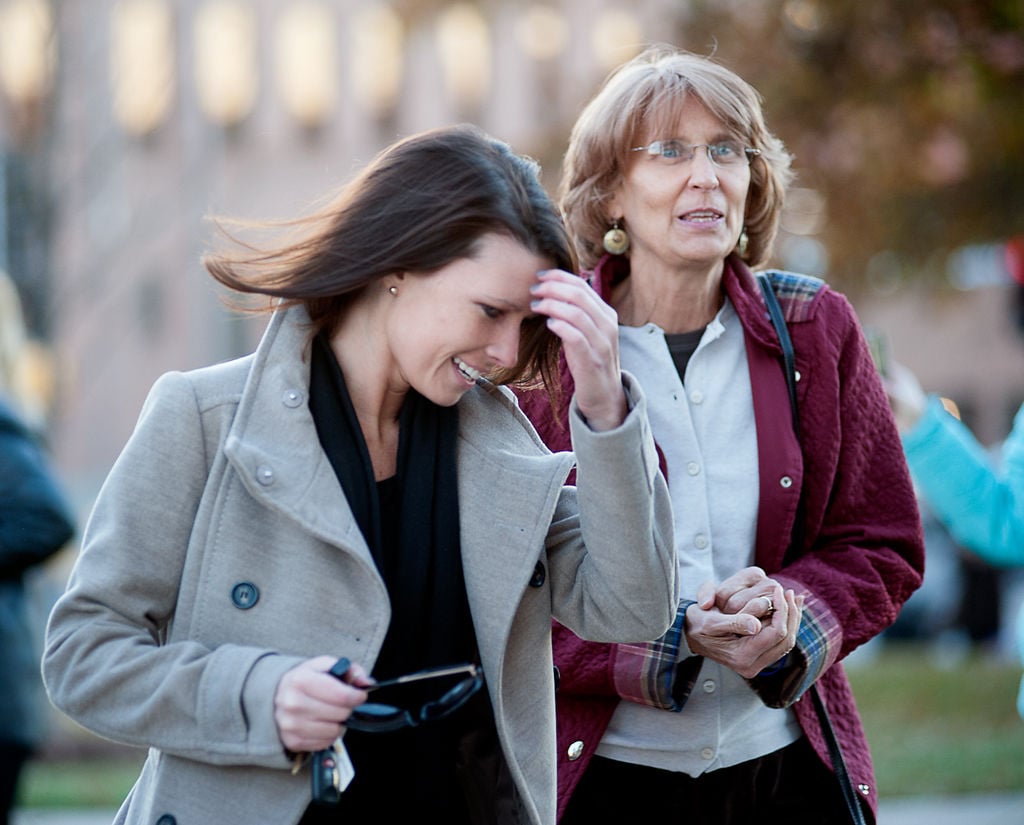 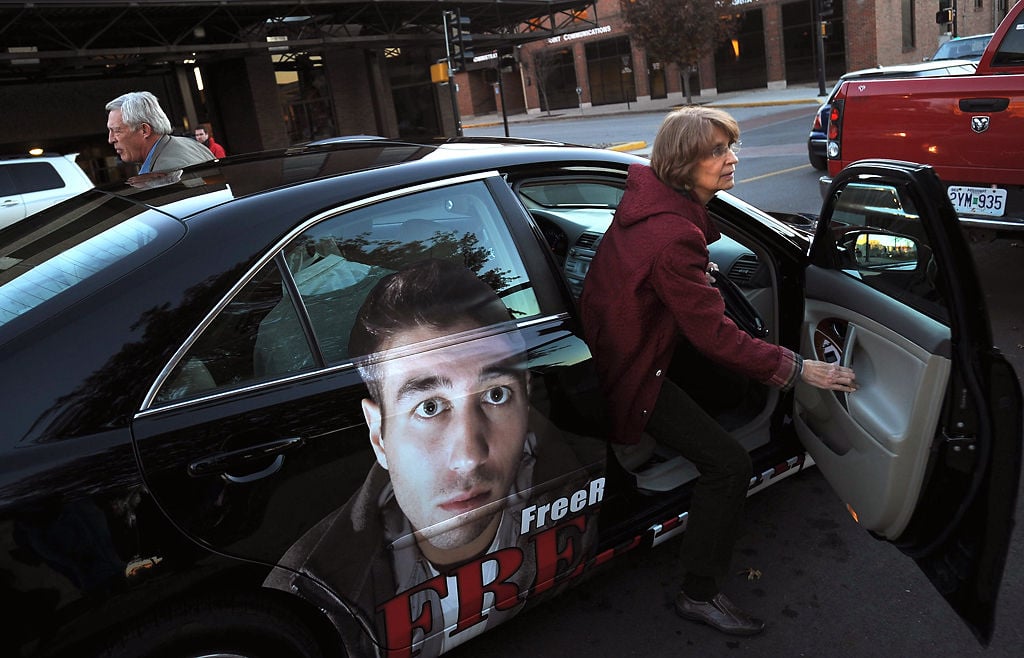 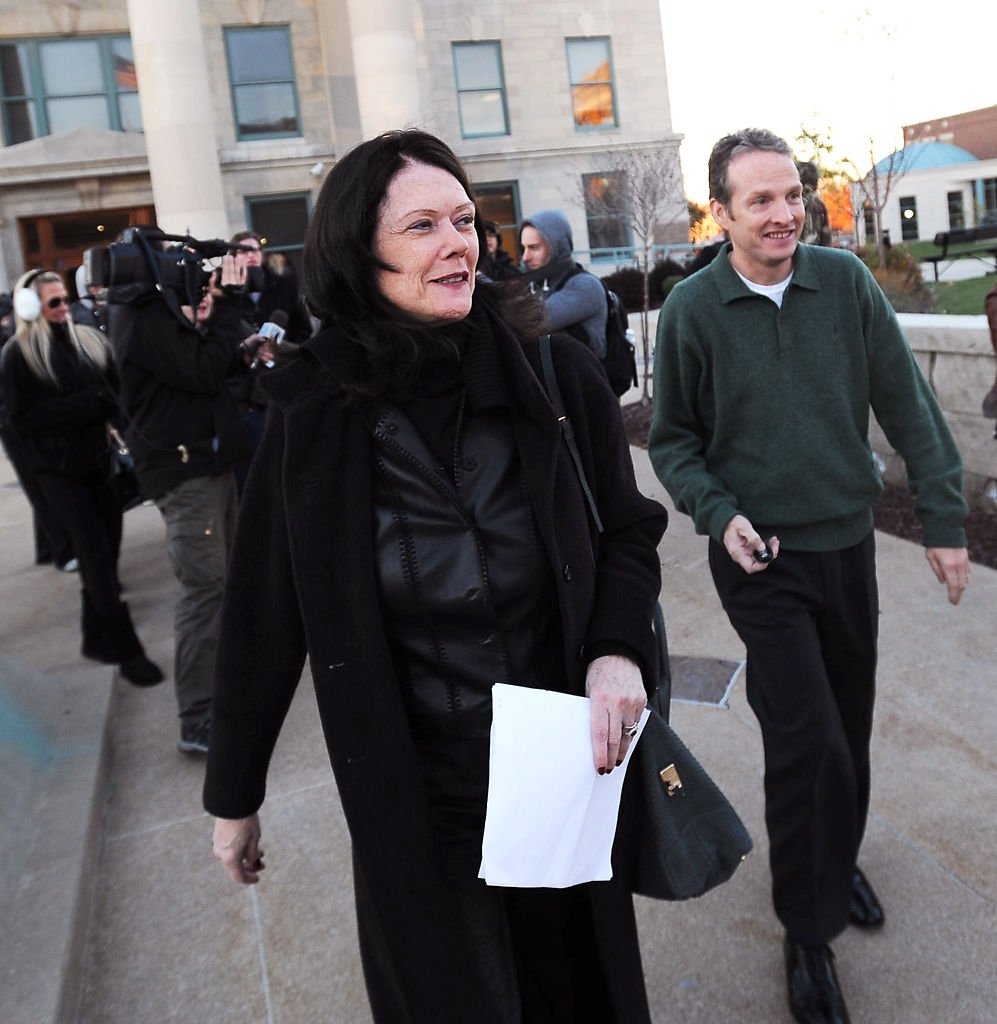 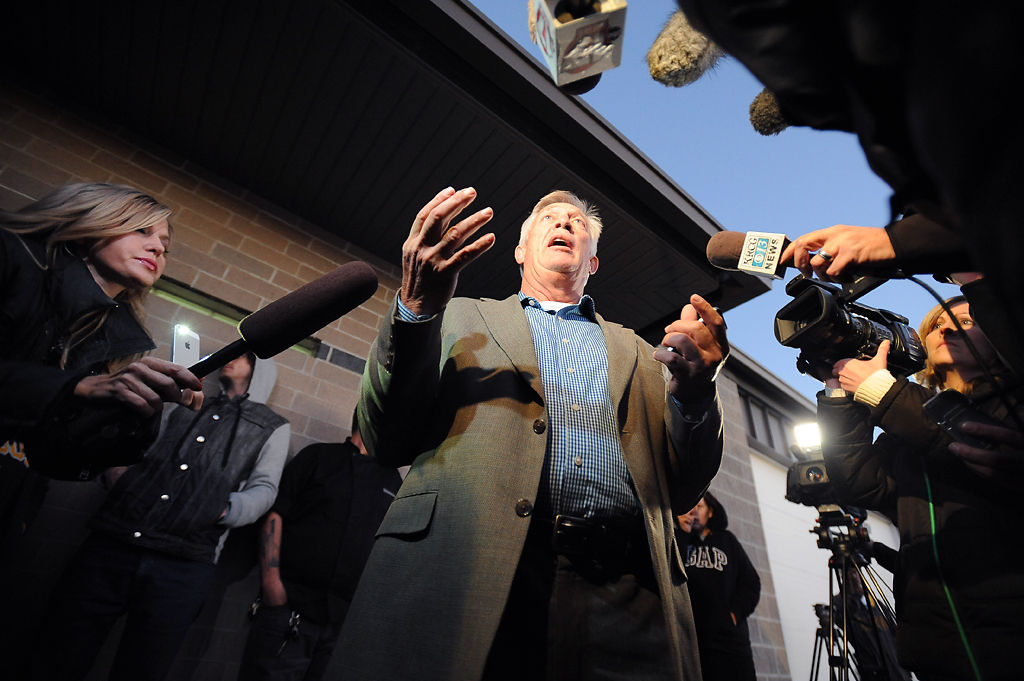 Ryan Ferguson's father, Bill Ferguson, speaks to members of the press after moving to the Boone County Jail, where his son was released Tuesday. 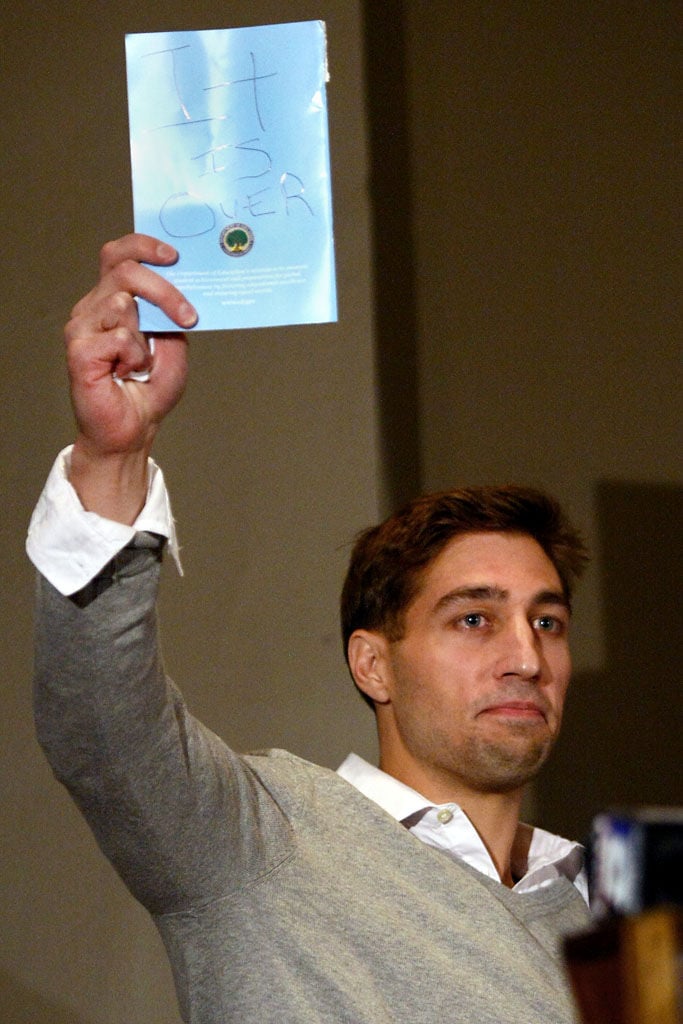 At the Tiger Hotel on Tuesday, Ryan Ferguson holds the sign his lawyer, Kathleen Zellner, made to inform him of his freedom. Zellner had held the sign up to a prison window to communicate the news to Ferguson. 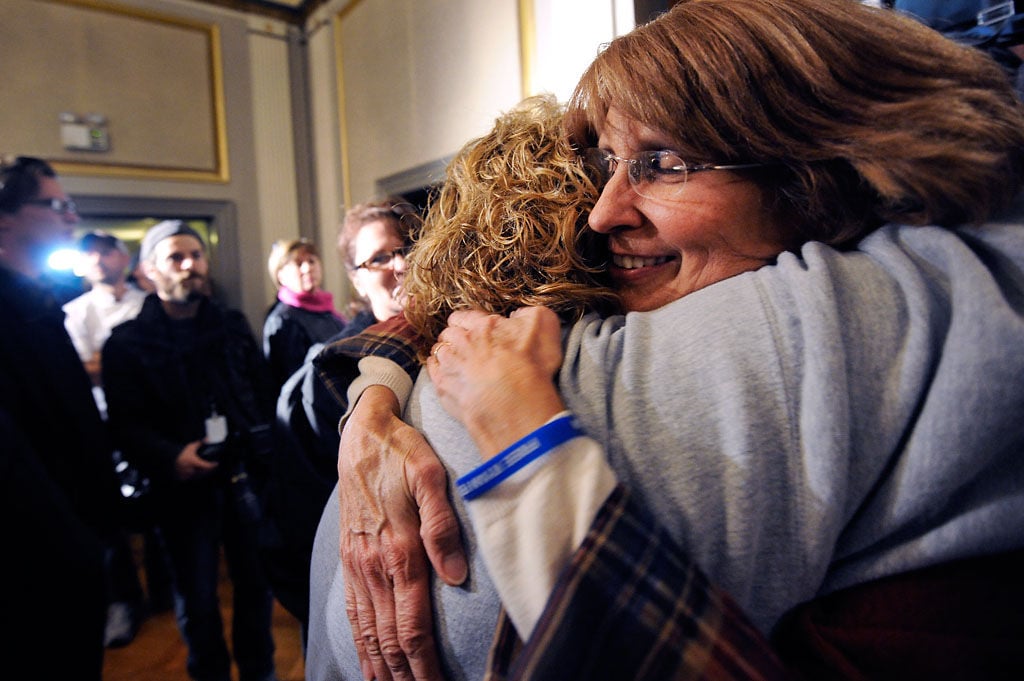 Leslie Ferguson embraces her friend and hairstylist Tracey Hudelson of Columbia, after her son Ryan Ferguson's news conference at the Tiger Hotel on Tuesday. Ryan Ferguson was released from prison earlier in the evening.

Ryan Ferguson's father, Bill Ferguson, speaks to members of the press after moving to the Boone County Jail, where his son was released Tuesday.

At the Tiger Hotel on Tuesday, Ryan Ferguson holds the sign his lawyer, Kathleen Zellner, made to inform him of his freedom. Zellner had held the sign up to a prison window to communicate the news to Ferguson.

Leslie Ferguson embraces her friend and hairstylist Tracey Hudelson of Columbia, after her son Ryan Ferguson's news conference at the Tiger Hotel on Tuesday. Ryan Ferguson was released from prison earlier in the evening.

*Update: Columbia police issue statement about the investigation into the slaying of Kent Heitholt.

COLUMBIA — The doors of a garage at the Boone County Jail opened Tuesday evening, revealing a car with Ryan Ferguson's face on its side. As usual, Ferguson's father, Bill, was driving, but for the first time in nearly eight years, Ryan was in the backseat.

As they drove away from the jail, marking the end of a tortuous legal battle, Ferguson was smiling.

At a news conference at the Tiger Hotel on Tuesday evening, Ferguson was cheerful, cracking jokes. But he also described the unease he felt during the chaotic day.

"Having gone through what I've gone though with our justice system, I was kind of scared about what would happen next," he said. "I didn't know this morning that I would be standing here tonight."

After serving nearly a decade in prison for a robbery and murder he always said he didn't commit, Ryan Ferguson became a free man. He was greeted by dozens of supporters and reporters who broke out cheering when they saw him leave the jail.

"It's good to know that he was robbed of nine years of his life and he still comes out with a huge smile on his face," supporter Carl Lewis said.

To make it official, the name of the "Free Ryan Ferguson" Facebook page was changed to "Freed Ryan Ferguson."

The state attorney general's office announced Tuesday afternoon that it wouldn't take action against Ferguson. He had been convicted in the 2001 slaying of Columbia Daily Tribune sports editor Kent Heitholt, but recantations by the event's two eyewitnesses and a lack of physical evidence left many questioning whether he was the person who committed the crime.

After many appeal attempts, what finally persuaded the Court of Appeals Western District to vacate his conviction was evidence that the prosecution withheld information from the defense during his trial — what is known as a Brady violation. On Nov. 5, the Appeals Court gave the state 15 days to determine whether it wanted to file a motion against the decision, which would have continued the Fergusons' legal war.

In the meantime, Ferguson's attorney, Kathleen Zellner, filed a motion to have him released on bond, and the state had until Tuesday to respond. Instead, the state decided to let him walk free earlier than expected.

"It was a wild day for sure," Ryan Ferguson said at the news conference. "A lot going on, a lot of emotions. I'm glad the difficult part is over."

Supporters: Justice has been served

At Tuesday's news conference, Ferguson said he had been exposed to the best and worst of humanity during his nearly decade-long journey.

"Being in prison for a crime you didn't commit, you start to lose trust in people and humanity," he said. "But through (my supporters), I was able to see there are a lot of sincere human beings out there."

Speaking to the public for the first time as a free man, he didn't look like someone who had just been released from prison. The smile never left his face, and he spoke with confidence.

He was calm under pressure, just as Zellner described him. He was already joking about his experiences and reflecting on his situation.

And he seemed moved by the support system around him.

"To get arrested and charged with a crime you didn't commit — it's incredibly easy, and you can lose your life incredibly fast," Ferguson said. "To get out of prison, it takes an army."

When Ferguson's sister, Kelly, arrived in the middle of the news conference, the siblings hugged and refused to let go.

As his parents and girlfriend, Myka Cain, beamed from the stage, the audience smiled back at them, and some faces were streaked with tears.

Ryan Ferguson thanked his family for the effort they put into getting him his freedom, a sentiment echoed by his supporters.

"(His mother) Leslie and Bill have given Ryan such a great foundation," said Carmel Skrabal, a teacher at West Boulevard Elementary who was at the news conference. "It's really given him strength over the past years. Leslie ... has sat down and highlighted every legal document trying to find loopholes. She's really researched and given everything for Ryan's case."

Bill Ferguson's efforts to publicize his son's case and build support for his release have been tireless. He has driven the car bearing his son's face on national press tours. He has given tours of the crime scene. He worked closely with defense attorney Kathleen Zellner, whose legal efforts were equally tenacious.

"I'm actually happier for my parents right now than I am for me," Ryan Ferguson said.

There was also sympathy for Charles "Chuck" Erickson, who was with Ferguson the night of Heitholt's death and later told police that he and Ferguson committed the murder after having dreams about the killing. Erickson has since recanted his testimony, saying he doesn't know what happened the night of the murder. He is still serving a 25-year sentence.

At the news conference, Ferguson brought attention to others he said have been wrongfully incarcerated, including Erickson.

"That guy's a lot of things, but the first one is innocent," he said.

Kent Heitholt's family was also not forgotten Tuesday night. Ferguson and his supporters expressed sympathy for them.

"The one thing I would want for them is to be able to look at the facts and be able to ask for justice," Ferguson said. "(The Heitholts) have been lied to by the people they trust, and to see them misled by the people they believe are trying to help them — I can't imagine anything worse than that."

*On Wednesday morning, the Columbia Police Department issued a press release saying it would respect the court's decision in Ferguson's case.

"As we have throughout the life of the case, we will continue to follow-up on any new leads or information that is brought to the department," the release said.

Confusing last day as a prisoner

Zellner was driving from Columbia to the Jefferson City Correctional Center to visit Ferguson when she got a call about his impending release.

In a phone interview while she was still driving to the prison, she said Ferguson's release was the "best thing in the world."

"They're giving him his life back, getting him back to his family," she said. "This is even better than we thought. It's over."

Ferguson didn't know he was about to be released until Zellner held up a booklet against the glass in the prison with "It is over" written on the back cover, which he later held up for supporters to see at the news conference.

He was allowed to change into clothes his girlfriend brought him, but the warden later told him to change back into his orange jumpsuit. A judge needed to sign an order before he could be released.

Bill Ferguson drove away from the prison without his son. A mass of reporters and supporters who were standing outside the prison followed him to the Boone County Courthouse to meet Zellner and Columbia defense attorney Jennifer Bukowsky. The pair disappeared inside the courthouse while the media waited outside.

Then the family learned that Ryan Ferguson was being transferred not to the court but to the Boone County Jail. The dozens of reporters and supporters who had joined the crowd raced to the jail, where for more than an hour they scurried from door to door, peering through windows and listening for a sign of Ferguson's arrival and release.

Finally, he was driven out of the jail and was greeted by thundering cheers as his family headed for the Tiger Hotel.

"I'm still confused," he said at the news conference. "I've been so confused the last couple of hours."

What's next for Ferguson?

Some audience members suggested Ferguson should run for mayor. Zellner said he should run for attorney general. Both suggestions were met with cheers and applause.

But what about his plans for the rest of the night?

"We're either going to Dairy Queen or to ring the bell at the courthouse," Zellner said, ending the news conference. "We're out of here."

A picture posted on the "Freed Ryan Ferguson" page later Tuesday night shows him eating a steak and drinking a beer in a restaurant, still smiling.

Ryan Ferguson to settle suit with city for undisclosed amount

Bill Ferguson, father of Ryan Ferguson, confirmed on Tuesday a settlement will take place in the $100 million suit against Columbia Police detectives.