This story has been updated to reflect that MU's School of Social Work still has an open contract with Planned Parenthood.

COLUMBIA — The decades-old relationship between MU's medical and nursing schools* and Planned Parenthood, partly described in contracts obtained by the Missourian through the Sunshine Law, has ended since the Senate Interim Committee on the Sanctity of Life began its investigation this past summer.

Between Aug. 21 and Sept. 3, university officials canceled 10 contracts with Planned Parenthood clinics in five cities in four states where MU students could complete clinical hours. In three of the cancellation letters, the university stated the contracts had not been used “for quite some time.”

Nursing and medical students were never required to work at any Planned Parenthood clinic, work at the clinic was not part of the core curriculum in either the nursing or medical schools and the placement was an optional rotation students could choose, University of Missouri Health System spokeswoman Mary Jenkins said Tuesday.

The 26-year relationship between the university and the health care provider has come under scrutiny since former Senate Leader Tom Dempsey formed the committee in July in response to the release of videos purporting to show Planned Parenthood senior staff selling aborted tissue. Led by state senator and attorney general hopeful Kurt Schaefer, R-Columbia, the committee aims to determine how Missouri clinics dispose of aborted tissue, whether any state funds were used to facilitate abortions and whether the health care provider has broken any state laws, according to the Missouri Senate website.

The committee met again Tuesday to get public feedback on its inquiry. All but one of the people who spoke said they were opposed to abortion and many opposed any facilitation of it by MU.

Representatives from the MU School of Medicine signed a letter of understanding with Planned Parenthood of Kansas and Mid-Missouri in 2005 that gave obstetrics and gynecology residents the option of learning how to perform surgical and medical abortions. If a resident were interested in learning to perform abortions, he or she was to contact the residency program director who would give the student contact information for the Columbia Planned Parenthood clinic, according to the letter of understanding. Clinic staff provided arrangements for “orientation, observation, training, and supervised provision” of abortion services, according to the letter. The student would then become “a credentialed provider of medical or surgical pregnancy termination services,” according to the letter.

The agreement with the medical school was required to meet Accreditation Council for Graduate Medical Education requirements that mandated schools provide training on abortion procedures at a student's request, MU Chancellor R. Bowen Loftin said in a letter to Schaefer.

The requirements have since changed, Loftin said. The agreement expired in 2011 and was not renewed, Jenkins said. One medical resident chose to shadow a nurse practitioner at the Columbia Planned Parenthood clinic in 2010 to learn about family planning and the placing of birth control devices, Jenkins said. No other medical students have worked at the clinic since 2010, Jenkins wrote in an email.

Nursing students' training included instruction on birth control, female health exams and cancer screenings, she said. About one or two nursing students each year elected to take the rotation at the Planned Parenthood clinic, she said. Those contracts have also been canceled.

"The nursing school administration reviews contracts routinely and decided to cancel them since there were ample opportunities at many other learning sites," she said.

*A contract between the School of Social Work and Planned Parenthood is still active, Jenkins said Thursday. The agreement allows social work students to complete fieldwork with one of the health care provider's social workers. The students have no contact with patients, Jenkins said.

The two people at the center of the committee's attention are a nursing professor, Kristin Metcalf-Wilson, who is also the lead clinician at Planned Parenthood of Kansas and Mid-Missouri, and St. Louis doctor Colleen McNicholas.

Metcalf-Wilson could bring nursing students to shadow her during her shifts at Planned Parenthood but could not perform or assist an abortion procedure or counsel a woman to have an abortion, according to a 2008 agreement between MU and the health care provider. Missouri law prohibits public employees from any of these activities.

Planned Parenthood paid the university for the nurse’s time, and her professional liability was covered under the university’s liability plan, according to the agreement.

During an Aug. 25 committee hearing, Schaefer alleged that Metcalf-Wilson had recruited McNicholas to perform abortions at the Columbia clinic through her role at the university, according to the Columbia Daily Tribune.

Metcalf-Wilson has never testified before the Senate committee and referred all questions to Planned Parenthood. The organization declined numerous requests for interviews.

The dozens of emails she wrote containing paperwork to be passed between hospital staff and the doctor and inquiring about what the next steps were to get the hospital privileges required to perform abortions in Missouri came from Metcalf-Wilson’s Planned Parenthood account.

In a Sept. 2 letter to the Missouri Catholic Conference, Loftin acknowledged that the “emails indicate that she (Metcalf-Wilson) may have facilitated communication between McNicholas and MU Health Care’s medical staff office in her capacity as a Planned Parenthood employee” and not on behalf of MU.

The conversation that Schaefer cited as proof that Metcalf-Wilson was recruiting McNicholas on university time is the only correspondence the nurse had with the doctor through her university account and it took place when both women were at a conference in Orlando in August 2014, according to Missourian analysis of hundreds of emails. In that instance, Metcalf-Wilson used her MU email address to arrange a time when the two could meet. 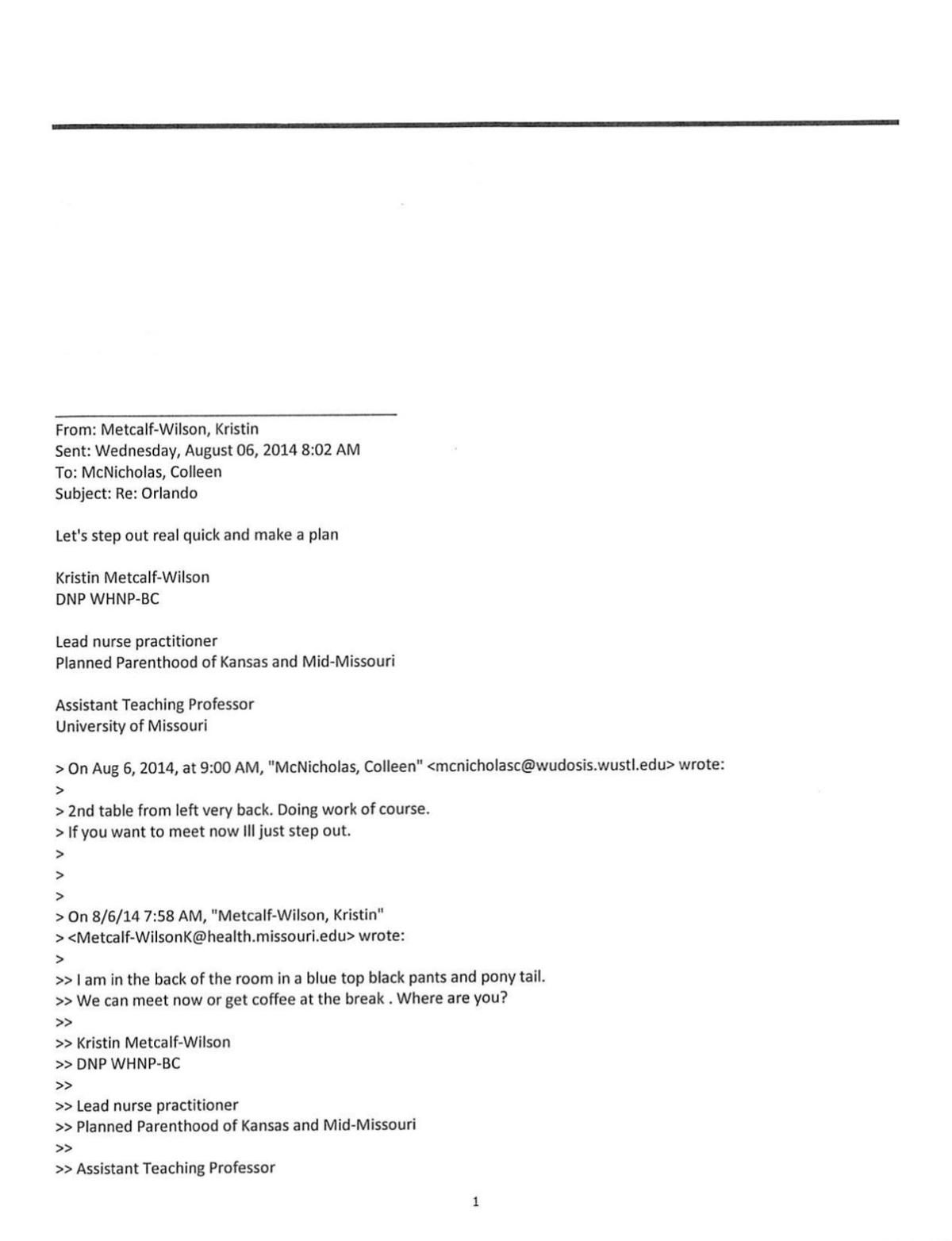 McNicholas later sent a follow-up email to Metcalf-Wilson’s MU email address outlining the topics they had discussed at the meeting, including how to get privileges at University Hospital and whether the refer and follow privileges would meet state requirements.

"It's exciting that you have some commitment and forward progress in restoring your services in Columbia," McNicholas said in the email. Metcalf-Wilson never replied.

McNicholas was granted “refer and follow” privileges at University Hospital on Dec. 15, according to a hospital letter to the doctor, and began performing medical abortions at the Columbia clinic on Aug. 3, according to previous Missourian reporting.

The Columbia Planned Parenthood clinic had not provided any abortion services since late 2012 because it did not have a doctor who met state requirements, according to previous Missourian reporting. The clinic only recently has begun providing medical abortions, but representatives said they planned to resume surgical abortion services in early 2016.

The Columbia clinic is the only abortion provider in mid-Missouri. The state’s only other provider is in St. Louis, according to previous Missourian reporting. There is also a clinic just over the state line in Overland Park, Kansas.

Much of the Senate committee's debate has focused on different interpretations of Missouri laws on abortions.

Two different laws regulate the privileges doctors must have to perform abortions in the state. One requires that doctors performing or inducing abortions have clinical privileges at a hospital no more than 30 miles from the clinic where the abortions are performed. The other requires that doctors performing surgeries have surgical privileges at a community hospital or have an agreement with a community hospital that will guarantee the transfer and admittance of patients for emergency treatment.

Neither law specifically addresses medical abortions — the only kind provided at the Columbia Planned Parenthood clinic.

On Tuesday, Schaefer alleged that the refer and follow privileges granted to McNicholas by MU Health Care do not meet these requirements because they do not allow her to admit patients and ensure their continued treatment.

Confusion about Missouri abortion law often occurs when "separate targeted regulations of abortion providers have to work together," Sepper said.

At Tuesday's meeting of the Sanctity of Life committee, Kathy Fork of Columbia told committee members she prays weekly outside the Columbia Planned Parenthood clinic as an organizer for anti-abortion group 40 Days for Life. “We have people on that sidewalk every day and we see what happens,” she said. “It’s appalling.”

Others criticized MU’s role in granting hospital privileges to McNicholas.

“But for the blessing of Mizzou there would not be the taking of unborn lives from Central Missouri,” said Mike Hoey, executive director of the Missouri Catholic Conference. Hoey was also the author of a letter to Loftin in August in which he expressed disappointment that the university was connected to abortions and urging the revocation of the doctor's privileges.

Loftin responded on Sept. 2 noting that MU Health Care was reviewing the policies and procedures it uses to grant privileges. McNicholas was not a university employee and had not used her privileges at University Hospital, Loftin said in his letter.

Susan Gibson, representing the National Organization for Women, told the committee it was spending too much effort on the topic of abortion while other issues, like gun violence or racial inequality, received less attention.

“Your attack can only be seen as a witch hunt trying to bring back the 19th century for women's rights,” she said.

The committee has yet to hear testimony from McNicholas or any representative of Planned Parenthood.

At the end of the hearing Tuesday, Schaefer said the Senate committee plans to ask for the health care provider's testimony soon. The committee must release a report on its findings and policy recommendations to the Missouri General Assembly by Dec. 31, according to the Missouri Senate website.

“The more we find out about this the more questions we seem to have,” Schaefer said. “We will keep plowing forward.”

Since Aug. 21, MU has canceled 10 contracts with the following Planned Parenthood branches across the country:

Jordan Hoyt writes that the decision to sever ties with Planned Parenthood hinders students' ability to decide how and where they enhance and employ their education.