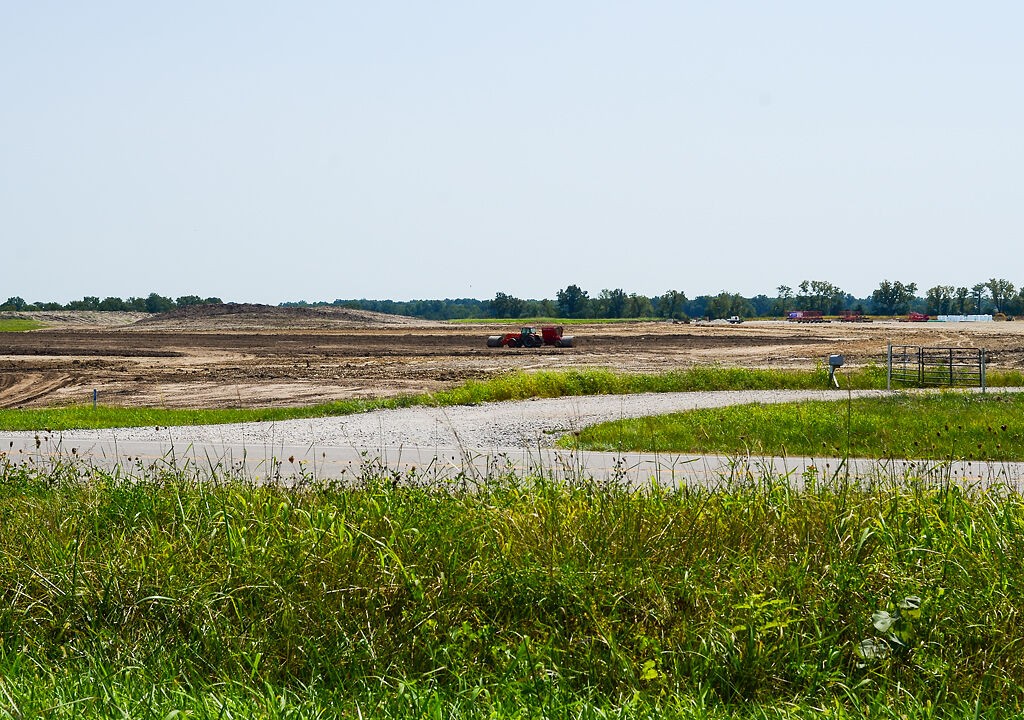 Site work continues on the future site of the new MidwayUSA headquarters at Route J and U.S. 40 on Aug. 23. Larry Potterfield got the property rezoned, but farmers downstream say the pending development is polluting a creek that runs through their property. 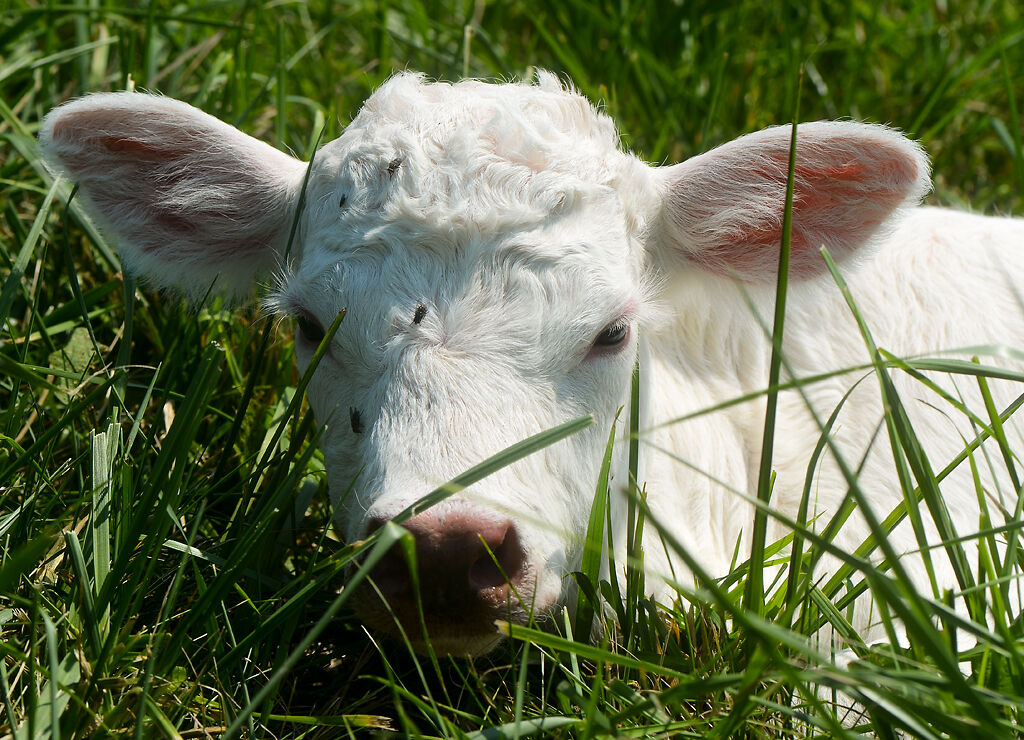 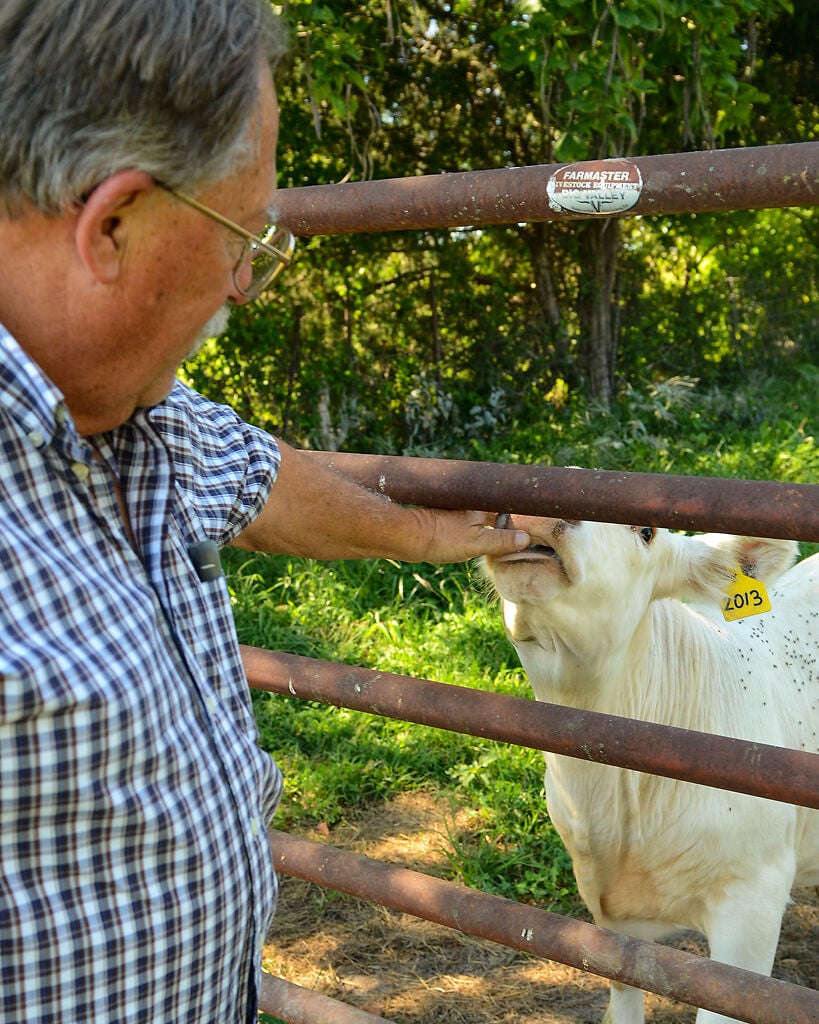 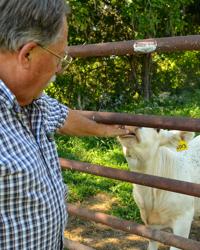 Denny Stephenson feeds one of his cows at the Stephenson Charolais farms near Rocheport, which he has owned and operated for 22 years. He says he and his neighbors are frustrated by the pollution of the Sugar Branch, which their cattle use for drinking water, as well as property values given the new MidwayUSA headquarters that will be built at Route J and U.S. 40. 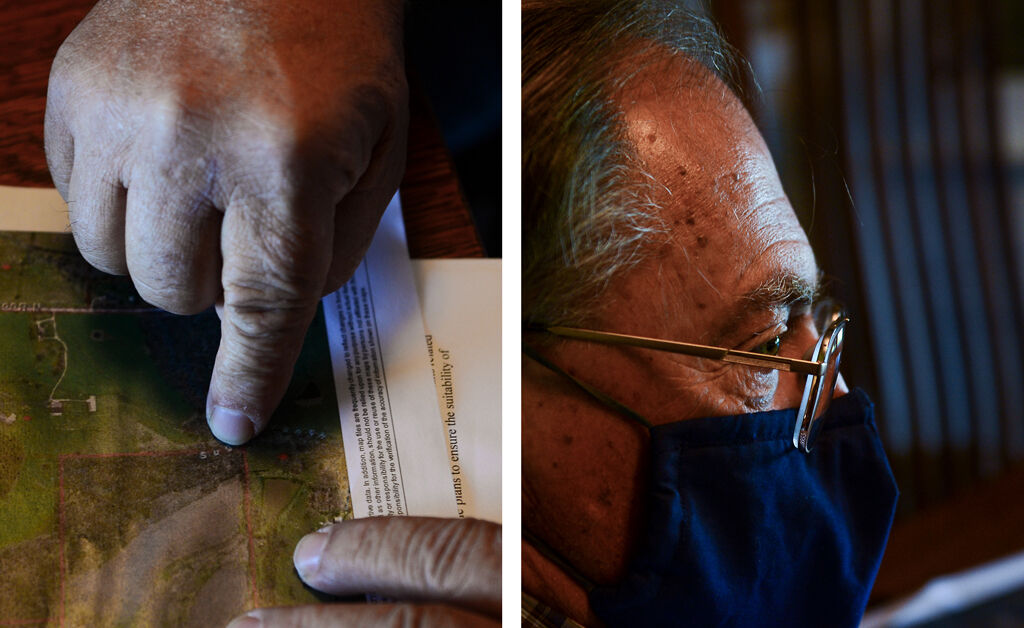 LEFT: Danny Stephenson points to Sugar Branch Creek, which cuts through his farmland, Aug. 23 in Rocheport. Though he and his neighbors are frustrated by the runoff into the creek, he said that they should "sit down and figure out what we can do about it; let's talk." RIGHT: Danny Stephenson is photographed in his home Aug. 21 in Rocheport. Stephenson has been advocating against the rezoning of 200 acres near his Stephenson Charolais for the last year. After being rezoned last December, construction to create a new warehouse began more than a month ago amid the surrounding farmland. 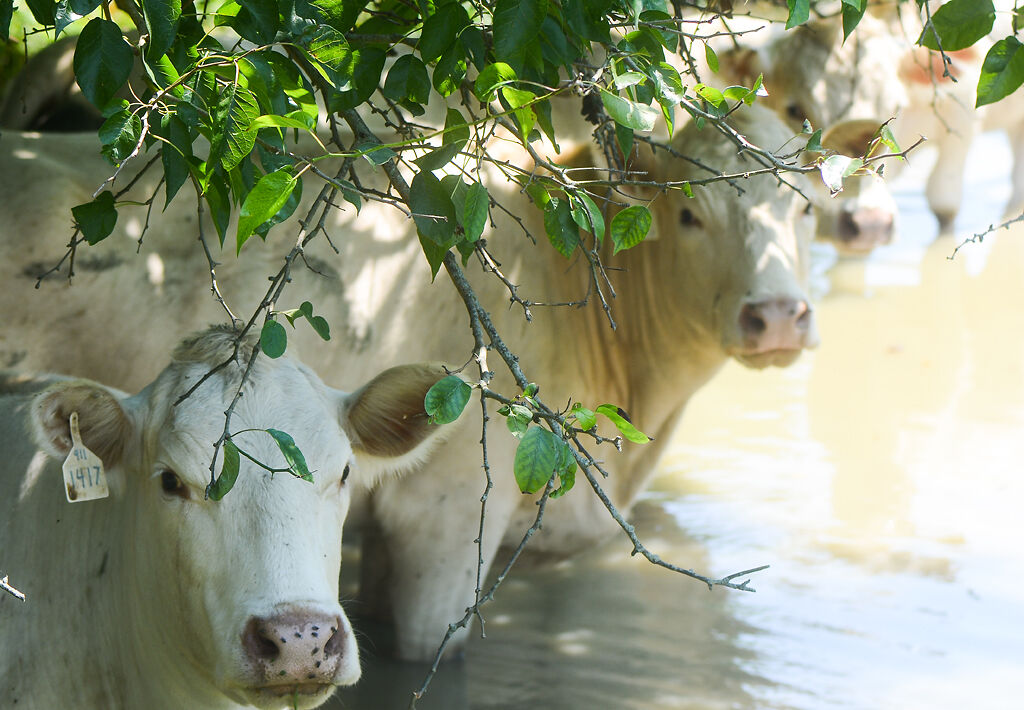 Denny Stephenson’s cattle cool off in dirty creek water Aug. 23 in Rocheport. The Sugar Branch they used to drink from used to run clear. 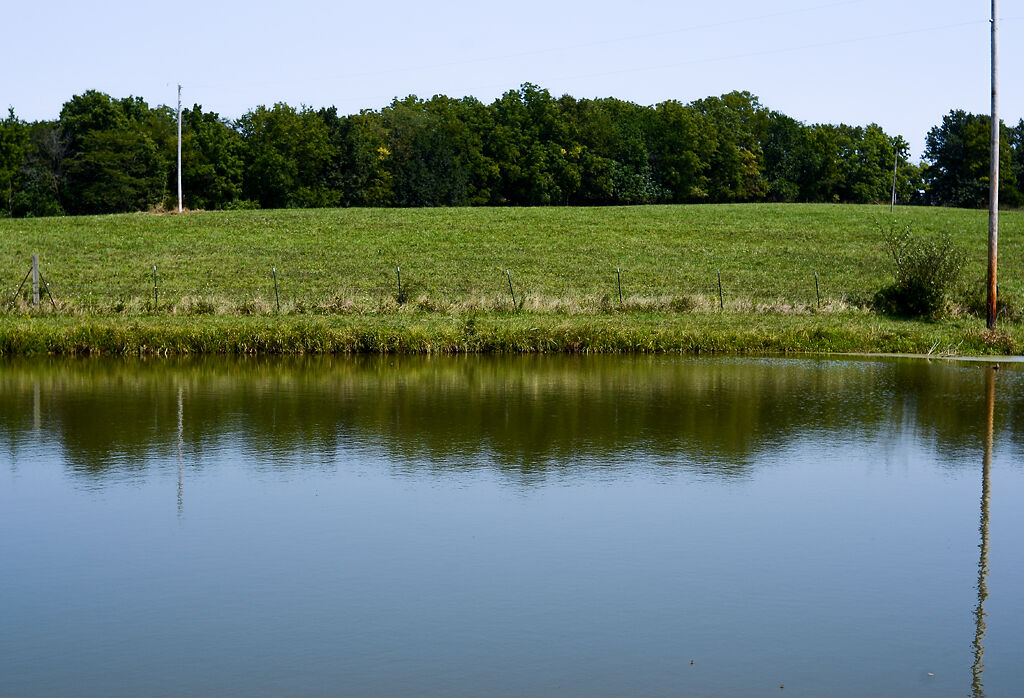 A pond on land Denny Stephenson leases from a neighbor has only recently been opened up to cattle because the Sugar Branch they normally drink from has become too silty. Stephenson thinks it will take years for the creek to run clear and be drinkable again. 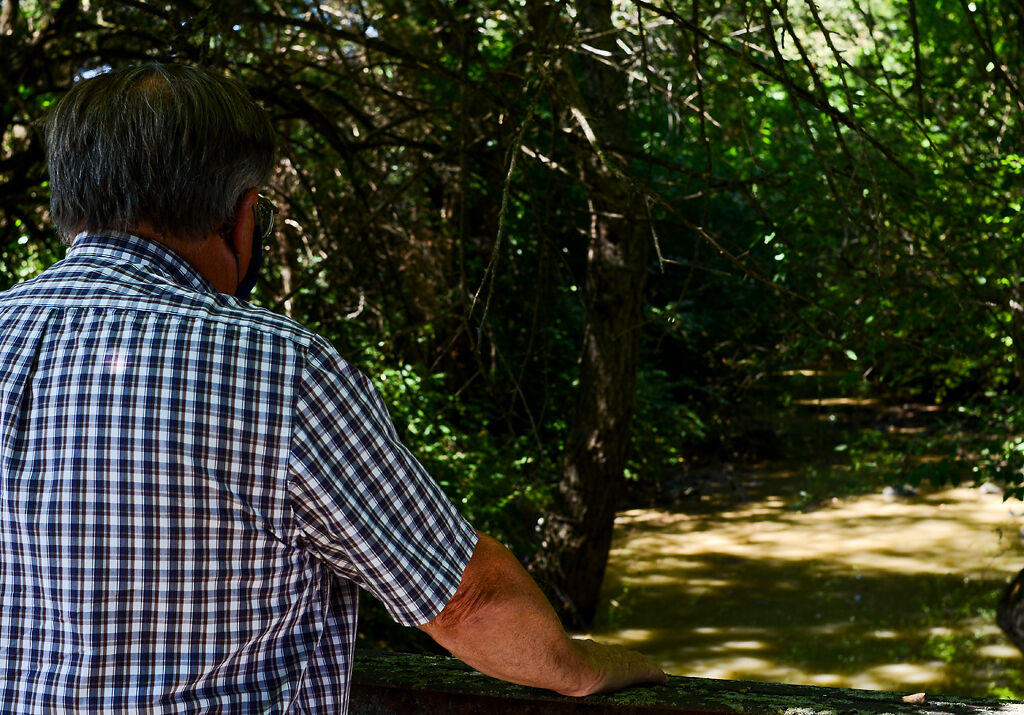 Denny Stephenson points out the silt muddying Sugar Branch on Aug. 23. His cattle usually drink from the stream but haven't done so lately because of the pollution. 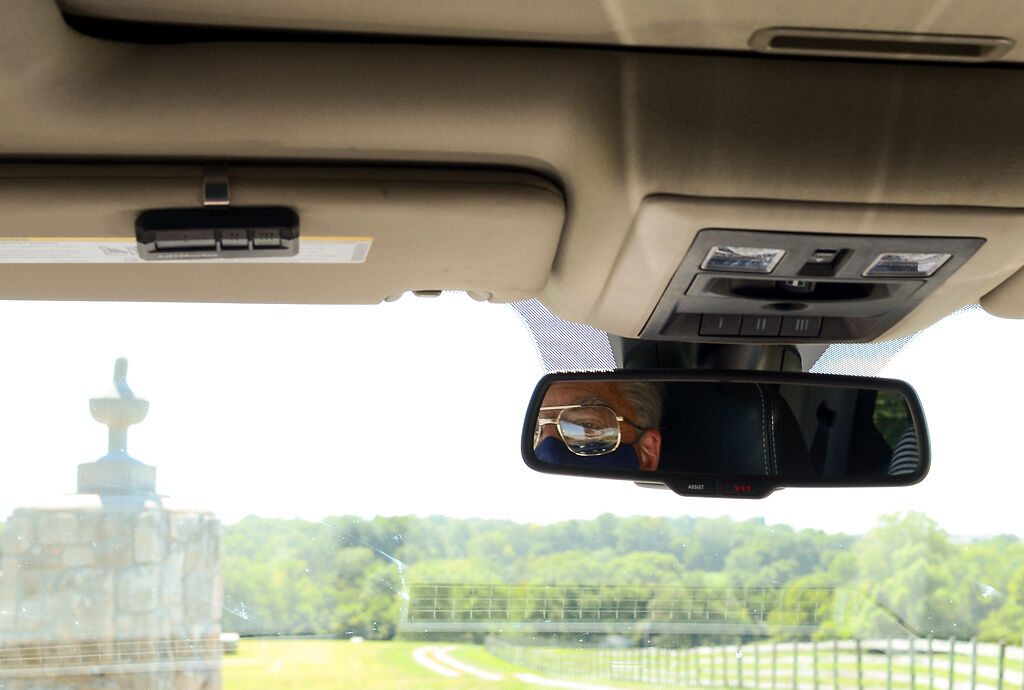 Denny Stephenson drives through farmland Aug. 23 near Rocheport. Stephenson is upset that development of the MidwayUSA property north of the land his cattle graze has polluted Sugar Branch.

A pure white cow with a fuzzy tuft of fur atop its head slowly chewed on a wad of fescue, a piece of the grass sticking out of the corner of its mouth.

“She’s number 1886, and her dad is number 268, and the downside of the tag says 1503, and that would be her mother,” Stephenson Charolais Farms owner Denny Stephenson said, referring to the cow’s ear tag.

Stephenson and his wife, Gloria Stephenson, have owned and operated their purebred Charolais cattle operation for over 20 years, renting much of the land from their neighbor Jack Blaylock.

The property, near Route J and U.S. 40 west of Columbia, is bisected north to south by Sugar Branch. The stream feeds into Perche Creek, which eventually flows into the Missouri River.

Sugar Branch provides crucial water for the Stephensons’ cattle. But that all changed when Larry Potterfield, the owner of the hunting and outdoor retailer MidwayUSA, began developing the property north of Stephenson’s and Blaylock’s land as the site of a new company headquarters. The Boone County Commission earlier this year agreed to rezone the land to allow the development.

“It was always crystal clear,” Stephenson said of Sugar Branch. Now, the stream’s water looks more like chocolate milk. It’s choked with silt, and mud has accumulated along its banks.

In an email Stephenson sent to the Osage Chapter of the Sierra Club, Stephenson said the creek, which normally has a rocky bed, is now covered with “heavy silt that aggravates the stream condition with additional silt release with every rain.”

Near the headwaters, located by the Foremost Dairy Research Center, the stream still flows crystal clear. Small fish dart back and forth, frogs jump from the bank into the stream. Every rock in the stream bed can be seen in detail.

Downstream of the Potterfield site, where crews have been preparing the land for development by stripping off topsoil and downing trees, the stream becomes murky brown.

“It doesn’t take Nostradamus to see where it’s coming from,” Stephenson said. “I can’t let them (cows) drink the dirty water. It’s a disease problem.”

Stephenson has been forced to use his landlord’s crappie pond, which is normally fenced off, to water his cattle. He said he understands that business is business, but he doesn’t appreciate the impact on his herd.

“It’s an environmental issue that’s got me in a bad business situation,” Stephenson said. “When I’ve got thousands of dollars of cattle shut off of water and I have to beg my landlord to ruin one of his ponds to keep my cattle in water, yeah, that becomes my business.”

Stephenson complained about the stream pollution to the Missouri Department of Natural Resources on July 27, and a similar online complaint was filed anonymously July 28 by a person identifying himself as Stephenson’s landlord.

Morgan Speichinger of the Department of Natural Resources visited the Potterfield site and Blaylock’s land July 29 to investigate the complaints, along with Brian Burks of Emery Sapp & Sons, the contractor for the development, and Jason Kemna of the Potterfield Group. In documents obtained by the Missourian, she reported that an unnamed tributary of Sugar Branch was “fairly clear” upstream of the site, while downstream the “water appeared to have a high sediment content and was very turbid.”

The Department of Natural Resources issued a letter of warning to the project managers Aug. 17 citing two points of noncompliance: “discharged water contaminants into waters of the state” and failure to “implement adequate (best management practices) to minimize sediment discharges.”

The letter of warning required that Emery Sapp & Sons and the Potterfield Group respond no later than Friday with photographs and written statements documenting the improvements made to bring the site up to code and prevent future issues. As of Tuesday afternoon, the Department of Natural Resources had no record of a response from the Potterfield Group or Emery Sapp & Sons, environmental specialist Joe Bowdish said.

Kemna declined comment Tuesday, and Burks could not be reached.

Stephenson said Tuesday that he’s seen no evidence of improvement in the creek. All he wants, he said, is for the stream to be restored to its original state.

“They have made no attempts to clean up their mess.”

Dozens of people filled the County Commission chambers Tuesday night in an effort to stop the rezoning.