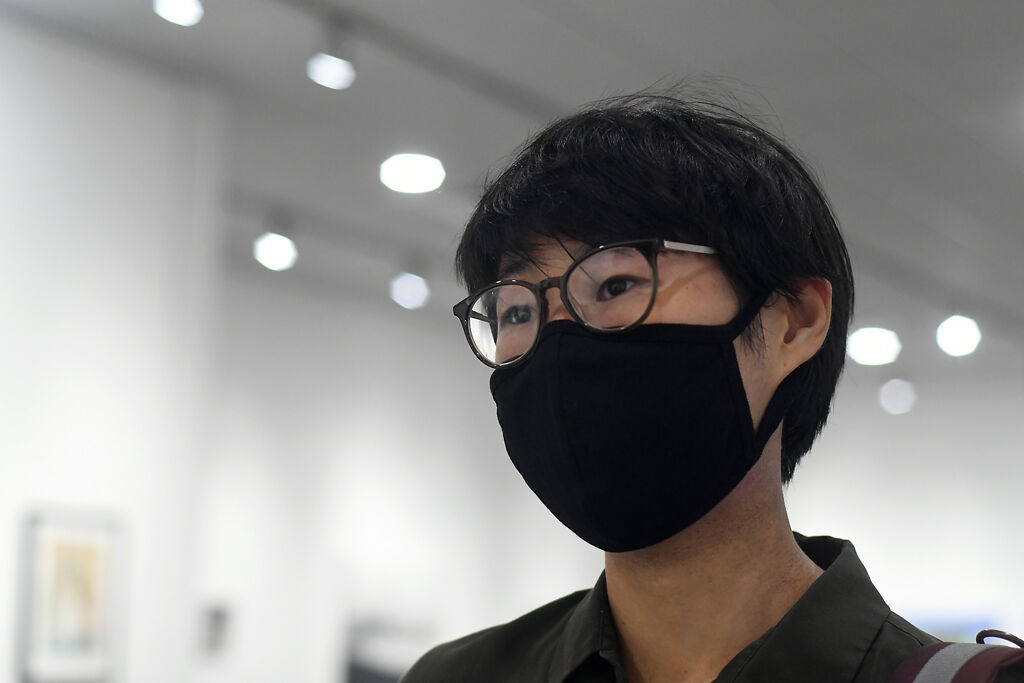 Digital artist and digital storytelling professor Lynn Kim is an experimental filmmaker who merges video, animation and sound to analyze and try to make sense of complex questions. 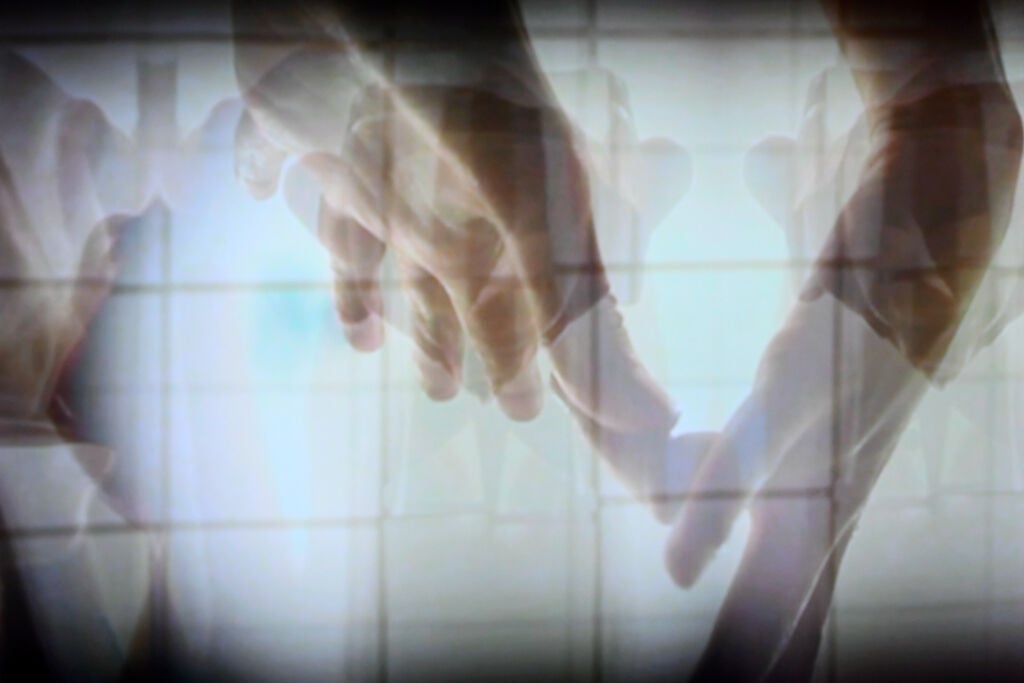 Digital art by Lynn Kim plays on a screen in the George Caleb Bingham Gallery as part of a slideshow. 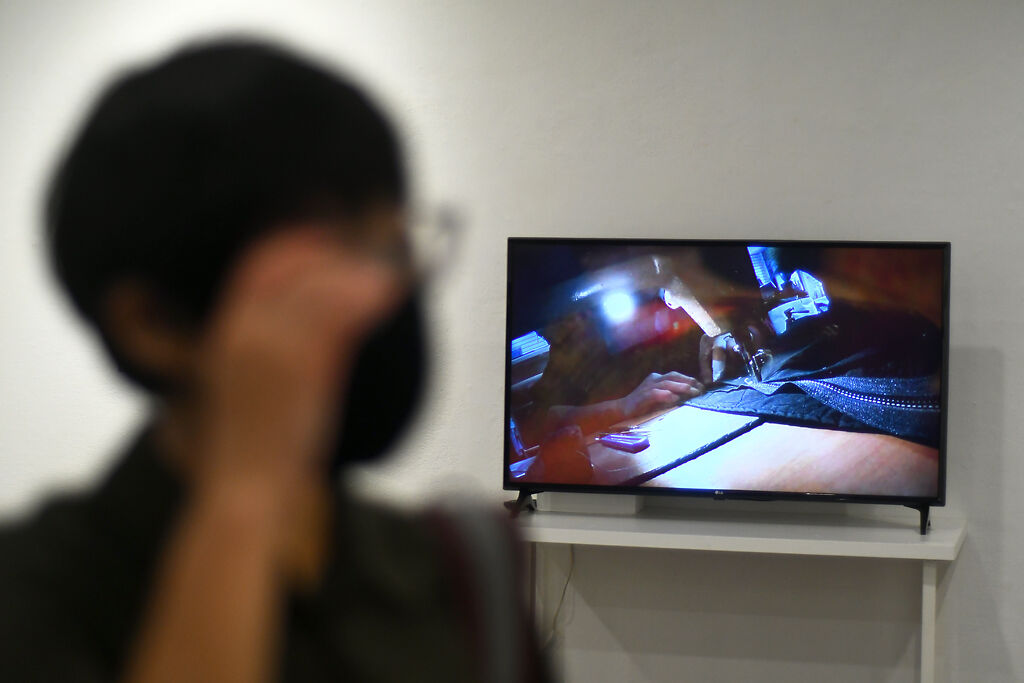 Kim was one of several MU professors showcasing their art in an exhibit at the George Caleb Bingham Gallery last fall.

Digital artist and digital storytelling professor Lynn Kim is an experimental filmmaker who merges video, animation and sound to analyze and try to make sense of complex questions.

Digital art by Lynn Kim plays on a screen in the George Caleb Bingham Gallery as part of a slideshow.

Kim was one of several MU professors showcasing their art in an exhibit at the George Caleb Bingham Gallery last fall.

Lynn Kim takes a bite of chocolate to boost her energy while she finishes a video art project.

The essay is a mix of techniques, including video collages, text and body cam footage. Hand-drawn sketches are photographed and exported as videos; voice-overs and film footage are added to tell a story.

An experimental filmmaker, Kim merges video, animation and sound to analyze and try to make sense of complex questions. What does it mean to be an East Asian woman, for example, or how do strict gender categories suffocate honest conversation?

She is the newest faculty member in the digital storytelling department within the MU School of Visual Studies. This fall she exhibited her work in the 2020 Faculty Exhibition at the George Caleb Bingham Gallery.

The digital storytelling department is the fastest growing major on campus, according to Katina Bitsicas, coordinator of the program.

Kim was drawn to the MU digital storytelling department because it fit her own filmmaking ideas. She likes to explore abstract and often contradictory aspects of the world.

“The way they approach digital media is very similar to how I approach filmmaking,” she said about the department. “In my work, I’m often exploring a question. DSP has a similar investment in asking questions about the world and exploring personal stories.”

One of her film essays, called “the yellow see,” asks what it means to be a yellow body among other yellow bodies.

She found material for the essay in a Korean market in Queens, New York. While strolling through the market one day, she spotted a yellow corvina, a saltwater fish found in the Yellow Sea.

As the head of the fish was being severed, she grabbed her camera and filmed the sequence. The fish then became a metaphor for a visual fusion of different yellow elements.

“An East Asian person has a yellow body that eats other yellow bodies like this fish, and the yellow fish comes from the Yellow Sea,” Kim said. “So, it’s thinking about the interconnectedness of these three yellow bodies.”

To complete the film, she compiled footage from the market with hand-drawn animated sketches and poetic voice-overs.

Analyzing the collision of art and science pushes her to understand the world’s incongruities. In a 2018 piece called “Did you know?” she merges zoological facts about spotted hyenas with information about personal identity.

She describes the work this way: It “puts parallels between the sorts of ways we categorize creatures and animals and applies that sort of thinking about how we view humans.”

The film also asks viewers to think about strict gender binaries and what that means for personal relationships.

“When you apply that sort of binary way of thinking about humans, we really miss out on all this depth, conversations around gender and sexuality,” she said.

By the time Kim has collected all of the clips for a film, she has at least 60 to sort through and arrange.

“Editing for me is taking those 60 clips and thinking about the connections I can make between them.”

She then edits both sequentially and associatively, putting clips in logical order or connecting them with like qualities.

“Looking at the water reminds me of rain, reminds me of the goosebumps on skin,” she said, describing associative editing. “Then using that sort of thinking to reinforce an idea or question I’m trying to answer in the world.”

Many of the clips are animations she creates with puppets, textures and patterns, positioning and moving them underneath her camera. Others are sketches she draws by hand. She acknowledges the merit of digital drawing but said she likes the intimate process of sketching.

“It has a nostalgic and comfortable feeling for me,” she said. “My personal preference is that I favor the textures you can get when you work with real objects.”

She is also interested in using poetry and writing to elaborate on her themes. Many of her pieces, including “The yellow see” and “Did you know?” are accompanied by voice-overs that integrate her visuals with language.

“Writing lends itself really naturally to metaphor,” she said. “It does exactly what I sometimes want an image to do — it moves between different meanings.”

Kim’s parents immigrated from Korea to New York when they were in their 20s. They worked in the garment industry in midtown Manhattan for at least two decades. Although they were not artists, Kim wonders if their work with textiles may have played a role in her career choice.

Her family settled in the “vibrant” city of Queens, which also contributed to her appetite for art.

“Growing up, I was probably the most art-inclined kid,” she said. “I am the first artist in my family, in terms of who identifies as such.”

As a child she said she liked to doodle, but her love of art skyrocketed when she encountered a teacher in high school. The art teacher encouraged her work and helped her build a portfolio so she could apply to the Rhode Island School of Design in Providence.

At the School of Design, she was inspired by professors who worked in various art fields: painting, drawing, furniture design, ceramics and, of course, film animation.

During her junior and senior years, she began to consider teaching.

“I really admired the educators I met in my life,” she said. “It seemed like a really smart way to stay plugged into a creative community. Every day I’m inspired.”

She completed graduate school at Ohio State University and worked for three years as a manager of the Media Lab at the Children’s Museum of the Arts in New York City, teaching animation and filmmaking to local communities.

Kim came to MU this fall as an assistant teaching professor.

She is now teaching two sections of Introduction to Digital Media Production, a required class for a digital storytelling major. Her students learn film video basics and how to tell stories through cinematic modes.

Kim also teaches Animation Production I, where she introduces students to animation techniques, software and materials.

Their first project was a portrait of a person using stop-motion video.

“I was really impressed by quite a few of their ideas. Conceptually, they’re a bit more experimental than I thought they’d be, which is awesome,” she said.

Lee Ann Garrison, the director of the MU School of Visual Studies, said she admires Kim’s sense of drawing, painting and composition within her animation pieces.

“I like the way she’s bridging the digital storytelling degree program with the art program,” Garrison said. “We’re hoping to get more of that interdisciplinary work in our school.”

Bitsicas said she hopes students will think more openly about animation with Kim as a teacher.

“She just had so many fresh ideas and ways in which students could utilize their animation skills,” she said.

Kim’s work should be viewed for “the sheer enjoyment of seeing good art.” Garrison said.

“She just has such a good eye for art, and we think she’s going to end up being one of those famous artists.”