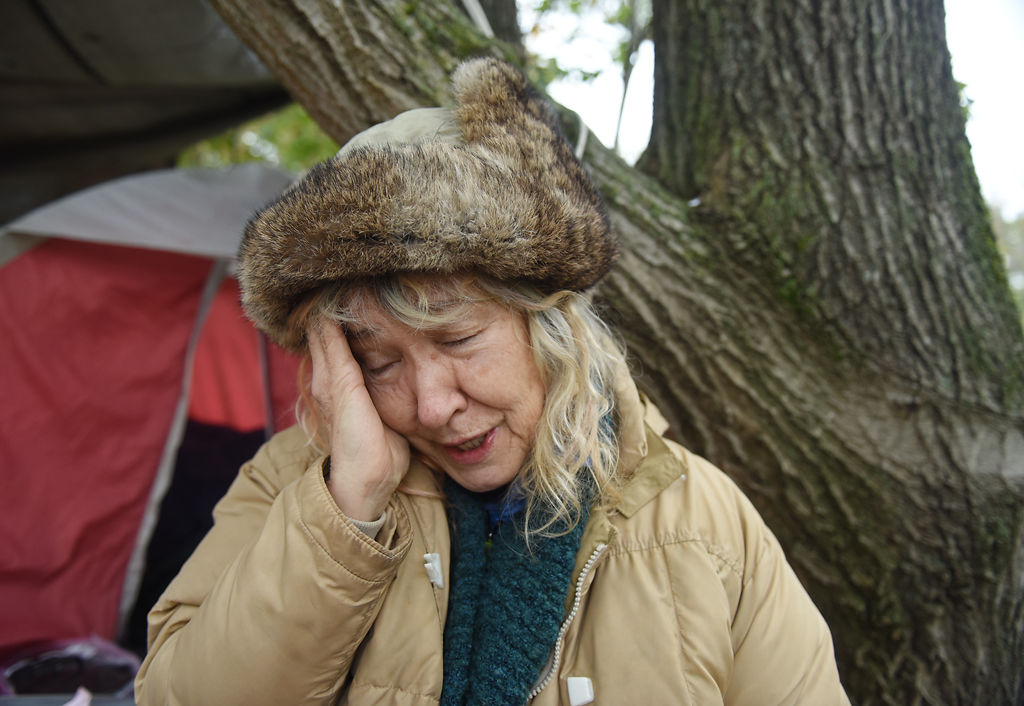 Sutu Forté been living in a tree since Monday to protest a new nature trail the city plans to build to connect the Shepard Boulevard neighborhood to the Hinkson Creek Trail. “The trees are alive. They breath in our carbon dioxide. The trees’ rings are identical to our thumbprint,” Forté said. “Don’t cut it down. Leave it. It becomes home for animals and birds.” 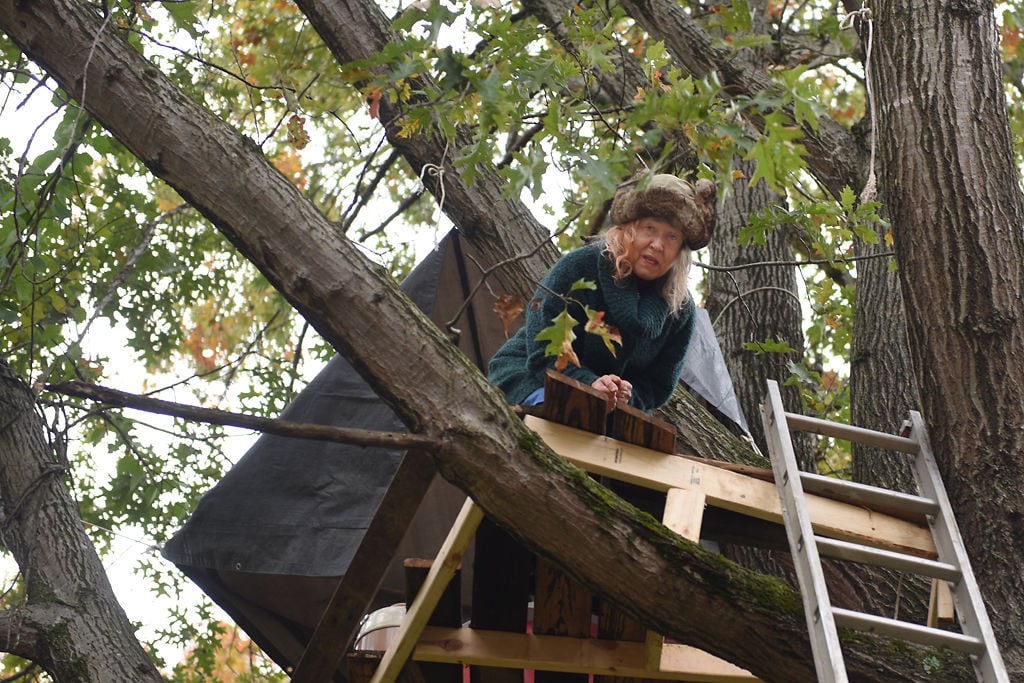 Sutu Forté talks to people from the top of a red oak last week near the site where the city plans to build the Shepard to Rollins Trail. Forté climbed into the tree Monday and vows to stay until the city comes up with a plan to save many of the mature trees it plans to cut down.

Sutu Forté been living in a tree since Monday to protest a new nature trail the city plans to build to connect the Shepard Boulevard neighborhood to the Hinkson Creek Trail. “The trees are alive. They breath in our carbon dioxide. The trees’ rings are identical to our thumbprint,” Forté said. “Don’t cut it down. Leave it. It becomes home for animals and birds.”

Sutu Forté talks to people from the top of a red oak last week near the site where the city plans to build the Shepard to Rollins Trail. Forté climbed into the tree Monday and vows to stay until the city comes up with a plan to save many of the mature trees it plans to cut down.

“Compromise is not applicable,” Sutu Forté said Wednesday, from a wooden platform heated with electric blankets and covered in tarps to shield her from hail and sleet. “How could there be a compromise if this is to remain the Columbia Wilderness Sanctuary?”

Forté, who scaled a red oak Monday to protest the city’s proposed Rollins-Old 63 trail connector, said only two things will get her to come down — a phone call from Mayor Brian Treece and a delay in the trail construction. She wants a citywide vote in April so taxpayers can decide the fate of the forest she has sworn to protect.

Sutu Forté is on her 6th day of the tree sit to prevent the destruction of 44 native mature trees, and dozens of smaller ones along the Hinkson Creek. Last night she was delivered notice of the city's right to remove her from the tree by two deputies of the Sheriff.@CoMissourian pic.twitter.com/OE1MlyuYit

Treece and Sixth Ward Councilwoman Betsy Peters did not respond to requests for comment.

Forté co-founded a nonprofit nature education and preservation group called It’s Our Wild Nature in 2008. The founding goal was preservation of the 37-acre Klifton R. Altis property, now owned by the organization, where the trail is to be built.

Jeff Barrow, former director of Missouri River Relief, has described the property as a string of pearls. On canoe trips down the Hinkson Creek, he said he has seen countless birds, otters and beavers. An unknown number of the condemned trees on the property also serve as a habitat for endangered bats.

After an eminent domain lawsuit, the city won the rights to the trail. To accommodate the 80-foot easement for the heavy equipment needed to build it, the city says 44 native mature trees must be cut down.

“Our wild nature is so precious,” Forté said. “It’s no longer a commodity; it’s perishing. And along with it, we will go next.”

In addition to her concern for the environment, Forté is unhappy about the city’s use of eminent domain to seize the property for recreational purposes. She said the city first wanted to put a trail in the area in the 1990s, but residents opposed it.

It was continually brought up over the years. After the PedNet Coalition began lobbying for it, the city went to greater lengths to obtain the property.

“They decide the welfare of the public, and they grab it,” Forté said of the City Council’s vote. “Somehow, our city government has put on a façade that they’re interested in input from the public, but nothing happens.”

In a video of Forté shared on Facebook, she said: “(The city’s use of eminent domain is) an insult to human dignity.”

Forté, 67, has had a relationship with the Hinkson Woods for almost 50 years, since shortly after she arrived in Columbia.

A San Francisco native, Forté came to Stephens College on a piano scholarship in 1970. In 1972, Forté, whose given first name is Susan, met the Franck family, whose members became her own. She babysat for their daughter, Sue, so she became “Sue 2,” which then became Sutu within the family. They lived on Bluffdale Drive, with the creek practically in their backyard. Forté still lives in that home.

Forté would take Sue and her brother, Gordon, on adventures with the dogs in the forest’s groves and pastures.

She left to attend Juilliard for her master’s degree and lived in New York for 10 years before moving back to San Francisco to care for her widowed father and grandmother. Eventually, it was draining her to stay in California, she said, and in 1994, Jane Franck sent her money for a plane ticket to Columbia, telling her: “Bring your two cats, too.”

“She gave me a whole new life,” Forté said. “She is my guardian angel.”

When she returned to Columbia, Forté considered herself a one-handed pianist because tendinitis impaired the functioning of her right arm. She assumed she would teach for the rest of her life. But Franck, who had been her piano teacher since she first came to Columbia, helped her recover.

“Columbia said, ‘Stay here; learn: you will heal,’” Forté said in her usual semi-poetic way. Eventually, she was able to regain full ability to play with her right hand.

Since 1994, Forté has lived on the small cul-de-sac of Bluffdale Drive. Her biological family in California is gone, but Forté said she knows they’re looking down on her with support. And she feels fulfilled by her chosen “spirit family.”

The children she once babysat, Gordon and Suzan Franck, still live in Columbia. Their parents, Jane and Wally, have been happily married for more than 60 years and live in New Franklin.

Suzan Franck still remembers meeting Forté at age 7 and finding baby catfish under the rocks in the creek. “Sutu is passionate about everything she does and always has been,” she said. As for the tree demonstration, “it’s not some sort of academic exercise.”

Jane Franck called the tree-sit “amazing,” though admittedly strange. “I don’t know how she managed to get that kind of courage,” she said, “I wouldn’t be able to do it, but I’m proud of her for what she’s doing.”

What Forté considers sacred as nature’s beauty is not always appreciated by others. Forté’s expansive garden is a collection of local pollinators, though the city has repeatedly ticketed her for not keeping it tidy enough.

She tends her garden specifically to benefit the existing ecology of Columbia and said that letting it naturally break down during the winter is one way to nourish the ecosystem. Each undisturbed stalk of milkweed feeds and shelters insects and pollinators, she said, long after its leaves are eaten by monarch butterflies.

Forté recognizes each of her neighbor’s chickens by name. She’s fond of a family of nearly a dozen deer that often stroll through the woods in the evenings, along with foxes and turtles.

One of the trees set to be killed or permanently stunted in the construction of the trail is an American red cedar, whose soft bark is perfect for climbing because it doesn’t scratch your hands and can create comfortable seating, Forté said. Like many of the other trees around her perch, a stake has been pounded into its drip zone to mark the easement boundary.

“We bought this land so that the trees and animals could continue to live as God intended them to and to share it respectfully,’’ Forté said.

Loss of habitat will occur, she believes. The animals will be scared away by the construction of a 10-foot-wide concrete path and the heavy machinery.

“I wanted to do this for people who feel it’s hopeless to save our wild nature and that their voice doesn’t mean anything anymore ... One day, you wake up, and there’s a bulldozer in your backyard, just for a bike trail,” Forté said. “It’s not democracy.”

Other Bluffdale Drive residents agree. Darron Blakemore, who lives next to “Purity Brother,” the tree where Forté is now stationed, said he doesn’t necessarily support the city or the nonprofit. But he doesn’t believe the use of eminent domain was legitimate.

“It doesn’t really seem important,” he said of the trail. Blakemore is concerned about the hassle that the lack of street parking during construction will create for his family and carpet business. “I just want the circus to be over.”

“Sutu’s giving us all a good lesson in civil disobedience,” said another neighbor, who asked not to be named because she works for the city and worries about repercussions. “This seems like an abuse of eminent domain, and I feel terrible this is still going on.”

Local blues troubadour Rocket Kirchner has called Forté a friend for the past two decades. The two met performing locally, and they have continued to enjoy a friendship and perform together ever since.

Kirchner sees consistency in Forté the musician and Forté the activist. He describes that quality as “off-the-grid innovative ... She’s not even playing in the same key, but it works.”

He worked with Forté when there was an effort underway to turn Stephens Lake Park “into a bunch of condominiums,” he recalled. “She’s no phony environmentalist; I can tell you she’s the real deal.”

He understands what she’s trying to accomplish through It’s Our Wild Nature. “She’s trying to keep that little area of hers preserved as a reminder of things that are higher than ourselves, and it’ll last longer than our generation.”

Forté explained her beliefs as: “Earth is god. Nature is god. And there is a niche for everything, which we should try to protect.”

But this most recent chapter in the story of Forté in Columbia is charted for an unknown destination. Circuit Court Judge Jeff Harris gave the go-ahead in a hearing Friday afternoon for the Boone County Sheriff’s Department to evict her from the tree.

Forté said she has a chain and a lock and will attach herself to the tree, if it comes to it. “My single effort is: I will stay in this tree, and they will have to cut me out, and I will do everything to resist it,” she said.

Nature trail protest taken to new heights — up a tree

Activist Sutu Forté says she won't come down as long as there is a chance to stop trees from being cut down.