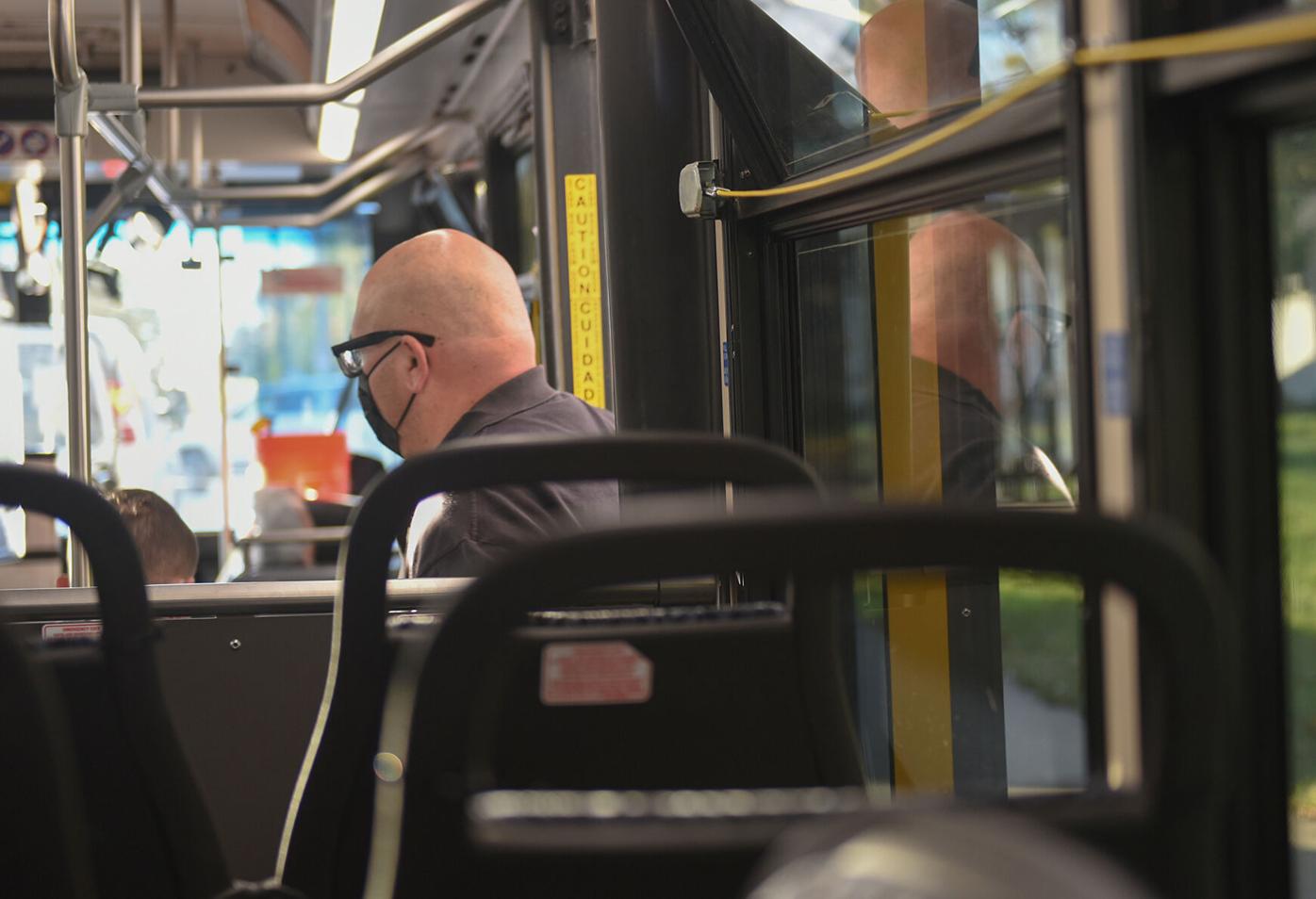 Thomas Sifford boards the bus Nov. 4 at a bus stop on Worley Street. Sifford has been using public bus transportation for almost a year. “It is a great service,” he said. “My wife is terminally ill, and the bus helps us to get to the hospital.” 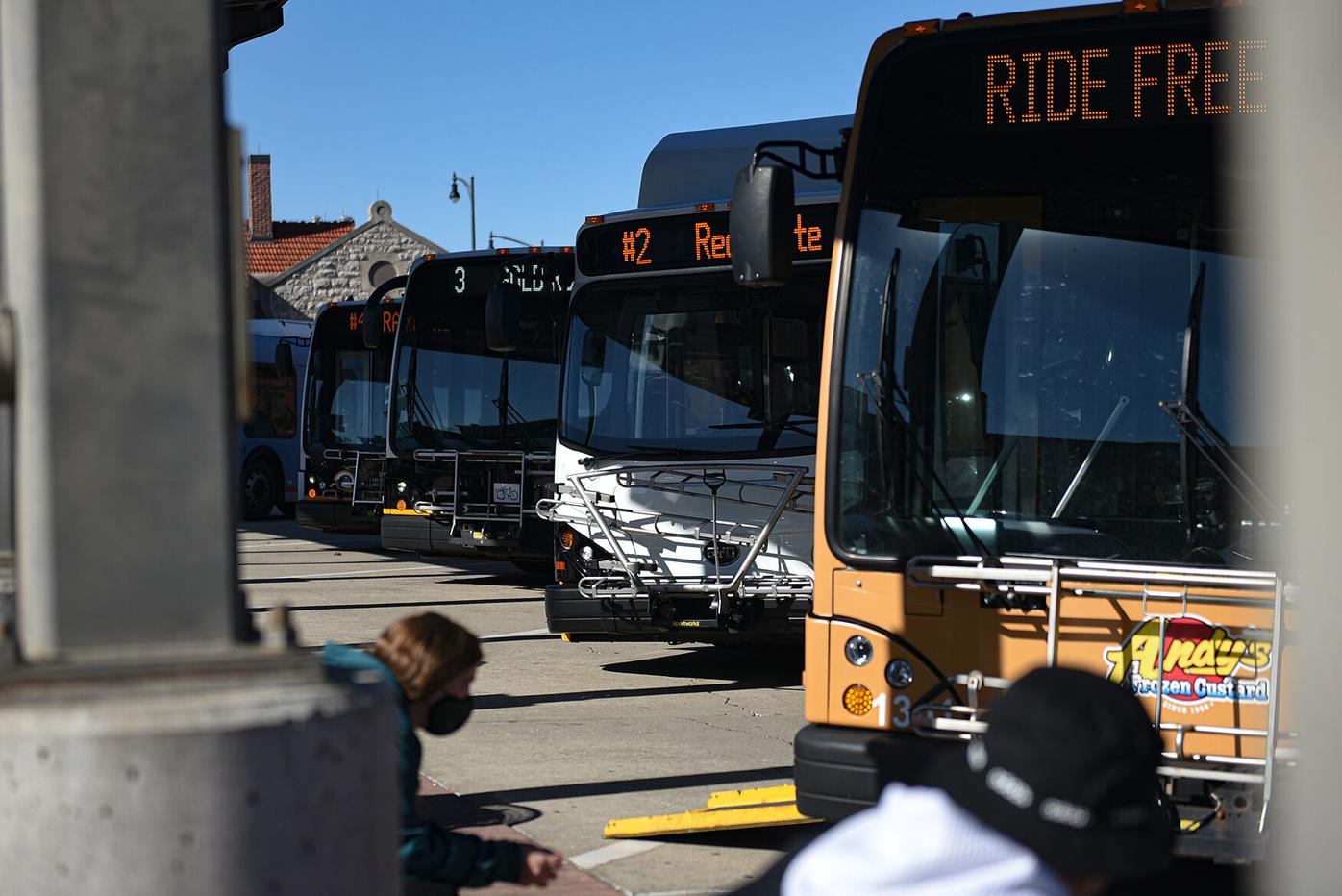 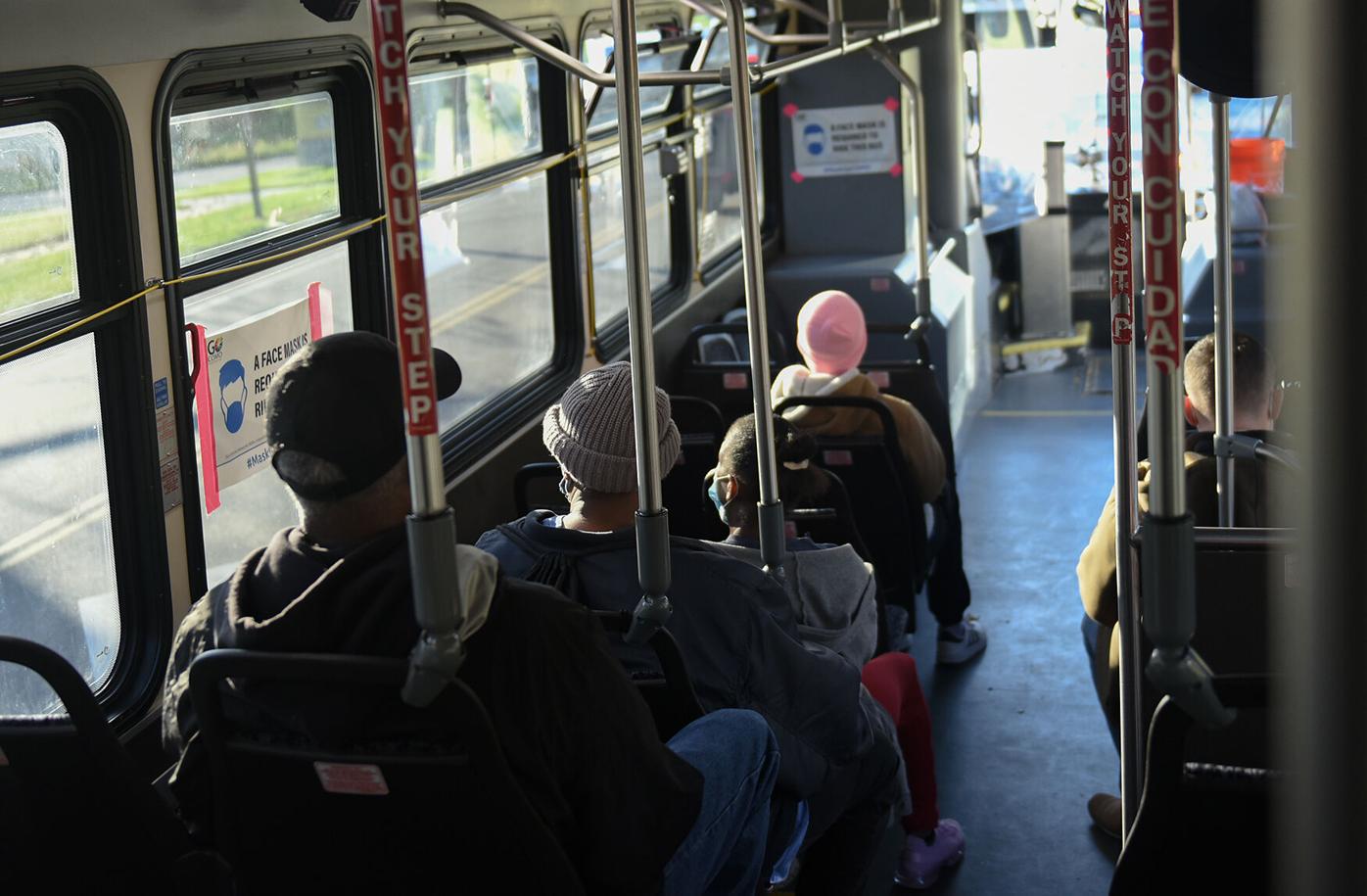 Passengers ride GoCOMO’s Gold Line route Nov. 4 in Columbia. GoCOMO, the city’s public transportation system, has a total of nine routes, six of which run through the city. The Gold Line runs from Fairview Road to Fifth Street. Three shuttle lines serve the MU campus and focus on overflow parking lots for students.

Thomas Sifford boards the bus Nov. 4 at a bus stop on Worley Street. Sifford has been using public bus transportation for almost a year. “It is a great service,” he said. “My wife is terminally ill, and the bus helps us to get to the hospital.”

Passengers ride GoCOMO’s Gold Line route Nov. 4 in Columbia. GoCOMO, the city’s public transportation system, has a total of nine routes, six of which run through the city. The Gold Line runs from Fairview Road to Fifth Street. Three shuttle lines serve the MU campus and focus on overflow parking lots for students.

MU junior Chloe Myska is up and ready for class 30 minutes early every day — not to do homework or to get a cup of coffee, but to catch the bus from her apartment complex to campus.

This is the norm not only for Myska, but for a large population at MU. The added time and stress attached to catching the bus are a small indication of a bigger void in Columbia — a lack of public transportation that serves the entire community.

Columbia’s public transit system, GoCOMO, has nine bus lines. Six travel through the city, and the other three run through the MU campus and focus on the overflow lots for students. But the MU and general Columbia lines don’t intersect.

It is an issue that vexes many and prompted one suggestion several years ago that never got any traction.

In the late 2010s, Columbia City Council member Ian Thomas tried to create a system where the university cuts a deal with the city’s Department of Transportation to pay a flat annual fee and allows those holding university ID cards to ride on the system for free. This system — used elsewhere in the country — is called U-Pass.

Thomas suggested that each student be charged $50 to $100 per year in exchange for essentially free ridership through U-Pass.

“That would increase the budget of the state of the transit system by more than 50%,” Thomas said. “We could put on a lot more buses with longer hours and new routes.”

Thomas said these routes would connect students on the MU campus with the rest of Columbia, allowing for cheaper, more sustainable transportation.

“It would be so beneficial for students in Columbia without a car,” he said. “It would solve the university’s parking space issues on campus, it would greatly reduce the carbon footprint of the university and it would increase the health of people as they’re walking to the bus.”

The University of Missouri System campuses in Kansas City and St. Louis have both successfully implemented the U-Pass program. Here’s how it works:

The student ID at UMKC works as a bus pass and is as good for getting around Kansas City as it is for gaining admission to sporting events, checking out books at the library and buying a meal, according to the UMKC website,

UMKC student IDs are also good on suburban Johnson County, Kansas, routes as part of an effort to create a regional transit network that is seamless and easy to use. UMKC students who live on the Kansas side of the state line can take a bus from Overland Park directly to the doorstep of UMKC with just a swipe of their ID.

UMSL partners with Metro, the regional agency that provides public transportation services in St. Louis, to offer students, faculty and staff access to Metrolink and Metrobus at a discounted rate. The Metro Pass Program provides unlimited access to Metro services during the fall, spring and summer semesters.

Dylan Cain, who received his master’s degree in public administration last year, was a Missouri Student Association senator when Thomas brought the proposal to campus in the late 2010s. After deciding to support U-Pass, Cain authored a bill designating an MSA Public Transit Week.

“We were able to work out an agreement with CoMo where during that week, students just had to show their student ID to ride the bus for free, no questions asked,” said Cain, now a performance auditor at the Office of the Illinois Attorney General. “That was part of a larger effort to engage students on public transit.”

MSA published these results from a survey taken after Transit Week in 2018:

“It’s not safe in a lot of ways, and it’s not a very user-friendly system,” he said about the situation. “Every day, you’re driving far off campus to park and then taking shuttle buses to campus.”

Cain is referring to the three shuttle routes that cover the campus. They start from the overflow parking lots, where students are assigned, and travel to various spots on campus.

Despite its success during MSA Public Transit Week, U-Pass did not take hold at MU. Cain believes the administration did not find it necessary.

“There was just a lot of apathy toward the issue,” he said.

MU administrators also raised questions about the obstacles that charging students an added cost would bring, he added.

“I can say, definitively, that there was some sort of pushback. There’s always a concern about student fees,” Cain said. “Nobody wants to get hit with a bigger price tag than they anticipated because of new student fees that are getting passed.”

According to Karlan Seville, director of internal communications at MU, the university is not in a position to increase funding for transportation.

“If students expressed an interest, the campus would need to take it to the Board of Curators for approval,” Seville said.

Cain believes the need for public transit is rooted in something bigger than university life. It’s an equity issue.

“If we’re talking about cities that have real access to the community, cities that have access to people with disabilities, cities that are more food-secure and environmentally conscious, those cities are looking at a lot of different things, but public transportation can play a part in all of those,” he said.

Thomas has been the main advocate for U-Pass inside city government, but he is not running for reelection at the end of his term in April. Yet he hopes current and future leadership will keep his effort alive.

Fourth Ward candidate Nick Foster picked up the public transit issue at a recent meeting of the Muleskinners, made up of Democrats in Boone County.

“Transportation for low-income people is an ongoing issue, so that’s definitely one of my concerns,” Foster said. “In general, I am for a more robust public transit system.”

Third Ward Council member Karl Skala, who is running for reelection in April, said the city has missed critical opportunities to improve transit.

“As we grow, I think some of these ideas are fertile and ought to be further funded,” Skala said. “It’s important to bring the ‘when’ into this, in terms of climate change.”

The key to moving toward a better system is educating the public, Thomas said. But after his term is up on the City Council, will anyone take up the mantle for U-Pass?