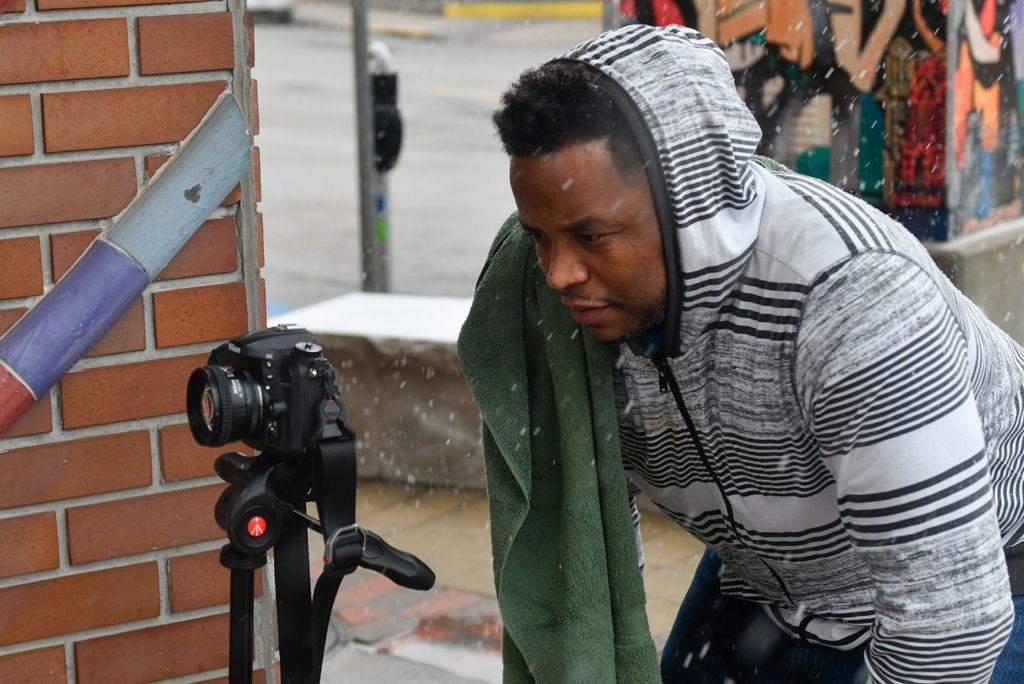 Sean Mearidy sets up his camera Wednesday in Columbia. Mearidy was taking self-portraits and was trying to get big flakes of snow in the picture. 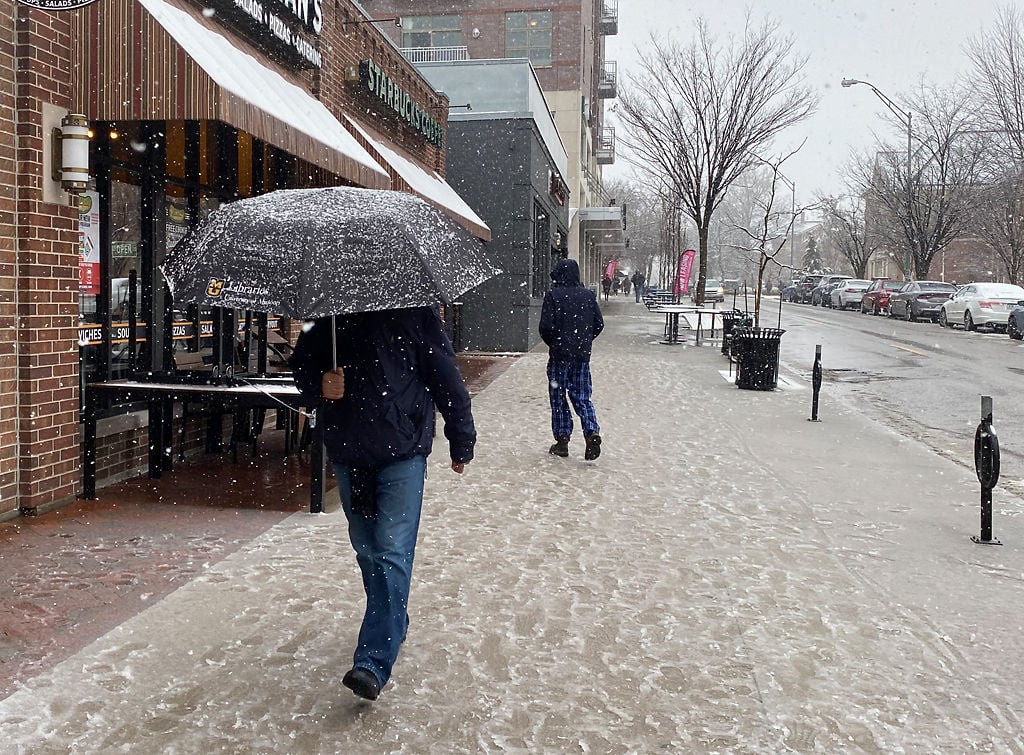 A person uses an umbrella as a shield against the snow at Ninth Street. Snowfall began around 8 a.m. Wednesday. 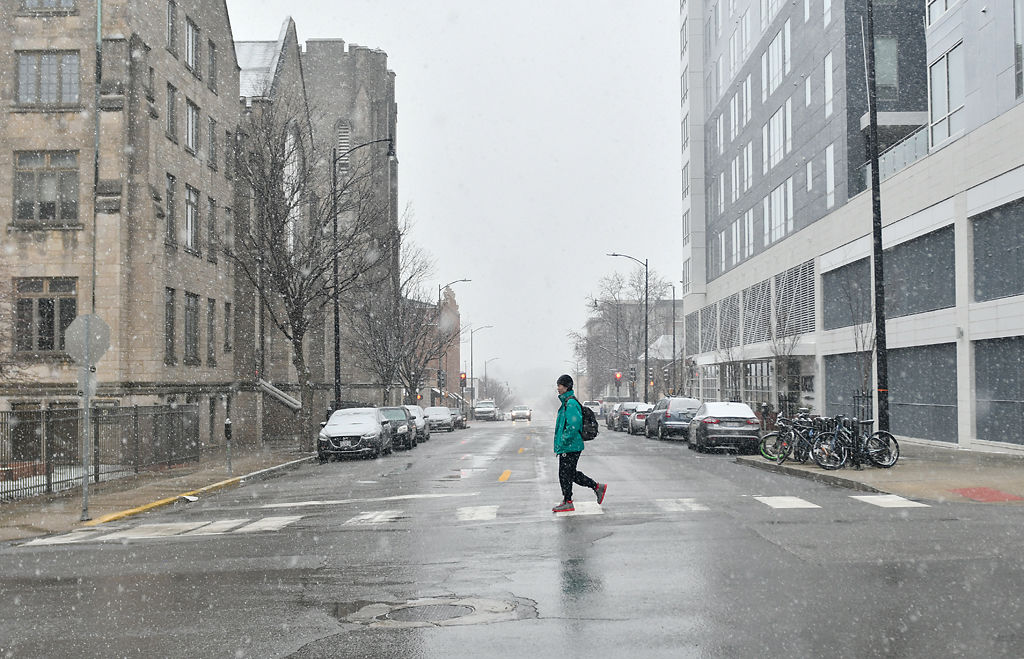 A student goes to class as the snow gets worse Wednesday in Columbia. 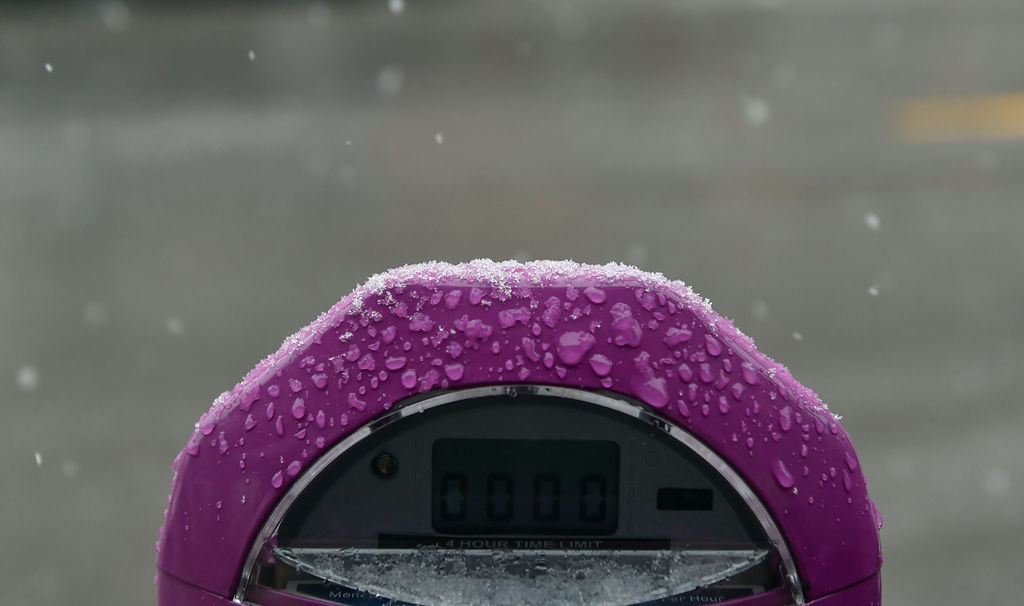 Moisture accumulates on a parking meter Wednesday in Columbia. 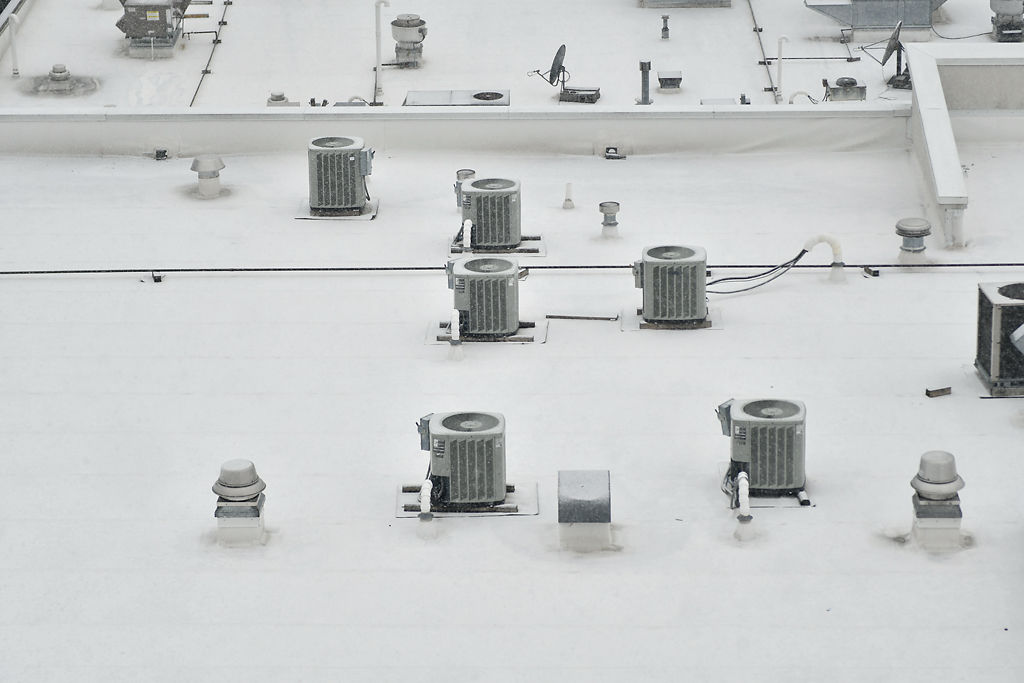 A roof full of heating and cooling units is covered with snow Wednesday in Columbia. 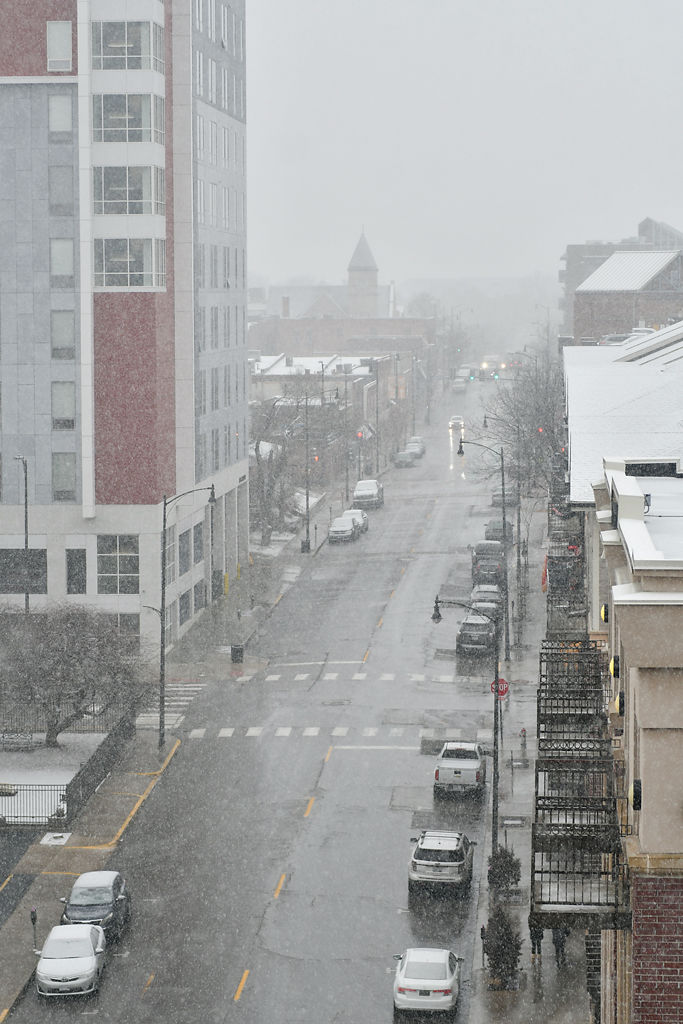 Fog fades away as snow falls on Tenth Street on Wednesday in Columbia. 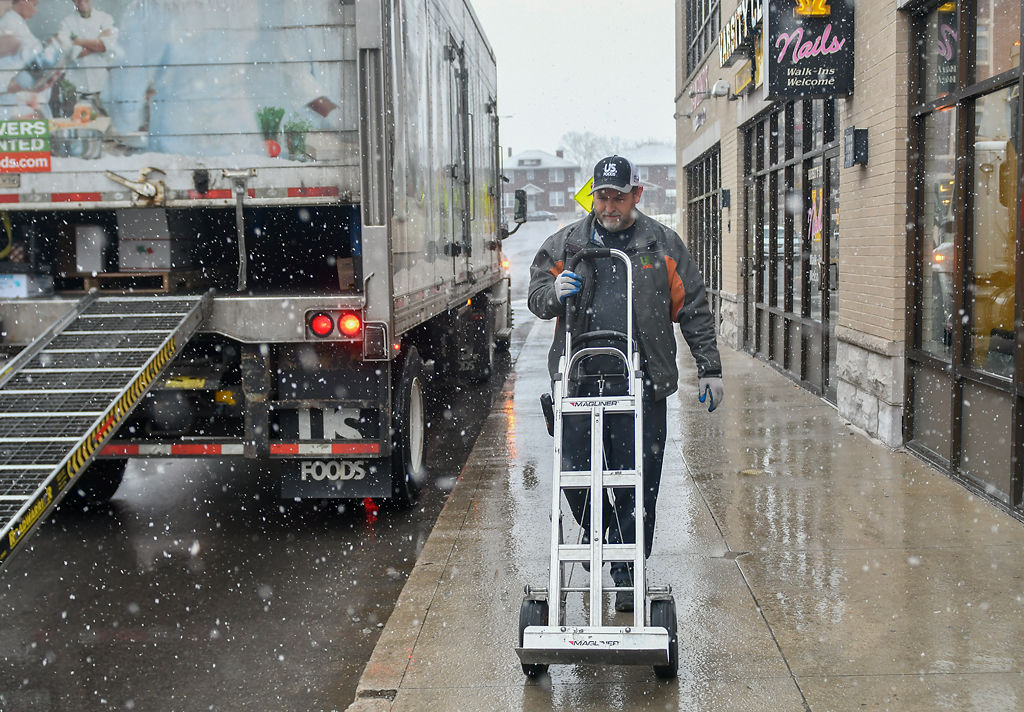 Kevin Renzelman delivers packages to Bambino's Italian Cafe on Wednesday in Columbia. Renzelman works for U.S. Foods and was rushing to finish the delivery. 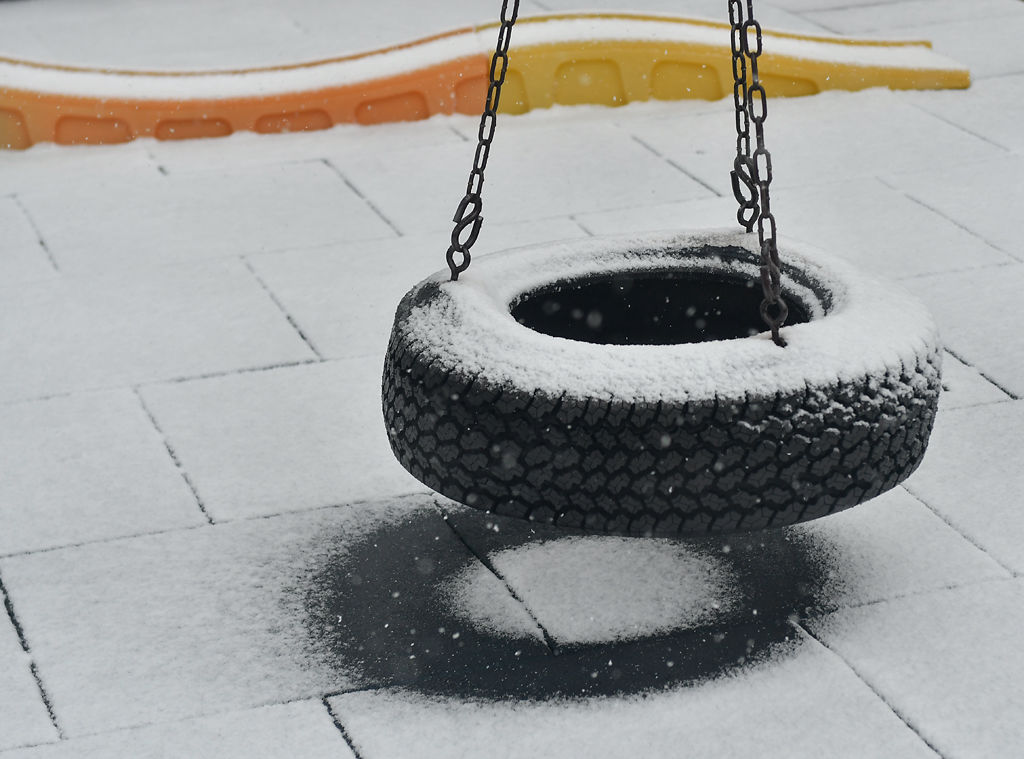 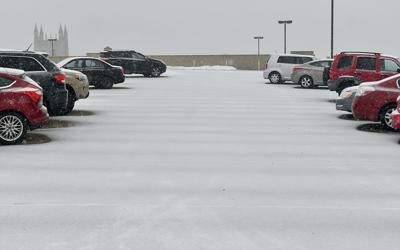 This story was updated at 10 a.m. Thursday.

Columbia's winter weather took a nasty turn Thursday, as some of the lowest temperatures of the year were recorded following Wednesday's wet mix of snow and rain.

The National Weather Service St. Louis tweeted that 7 a.m. temperature in Columbia was 9 degrees, with a wind chill of -9 degrees.

"Temperatures will continue to fall the next few hours as colder air moves into the area," the tweet continued. "A wind chill advisory remains in effect until noon."

Authorities warned that road conditions could be slick in areas as the bitterly cold temperatures had frozen any moisture. Despite sunshine, the high temperature for the day is predicted to be only in the mid-teens, providing little relief or melting.

Because of the extremely cold weather, Columbia Public Schools will be closed Thursday, according to a Tweet from district spokesperson Michelle Baumstark. Tolton Catholic High School will have a delayed start and will open at 10 a.m.

This amounts to a five-day "weekend" for public school students because classes are not in session Friday for a teacher work day and Monday for the national holiday, Presidents Day.

The city announced that it would open a temporary overnight warming center from 7 p.m. to 6 a.m. Wednesday and Thursday at Wabash Bus Station, 126 N. Tenth St.

Veterans are able to spend the night in the emergency room lobby area, the release said. Shelter will be provided to a veteran’s family as well, if they accompany the veteran. No one will be turned away during inclement weather regardless of veteran status, the release said.

KOMU meteorologist Matt Beckwith said Thursday morning may see the coldest temperatures since November, while Friday's morning low could be the coldest since last March.

The Missouri Department of Transportation Central District tweeted around 10 a.m. that snow was beginning to partially cover routes and urging motorists not to travel if possible. But by 3 p.m. MoDOT was reporting most major routes were cleared of snow, while urging motorists to take care.

The Missouri Highway Patrol Troop F reported that it had responded to 36 crashes, resulting in eight injuries and 27 stranded motorists but no deaths.

Information on cancellations and closings is available at KOMU's website.

The district was releasing students early; however, it reported that some buses were running late because of deteriorating road conditions.

There will be updates to come from Mizzou Parking for the shuttle routes Thursday as the weather develops more.

The top floors of parking garages were closed Wednesday due to the weather, Mizzou Parking also announced.