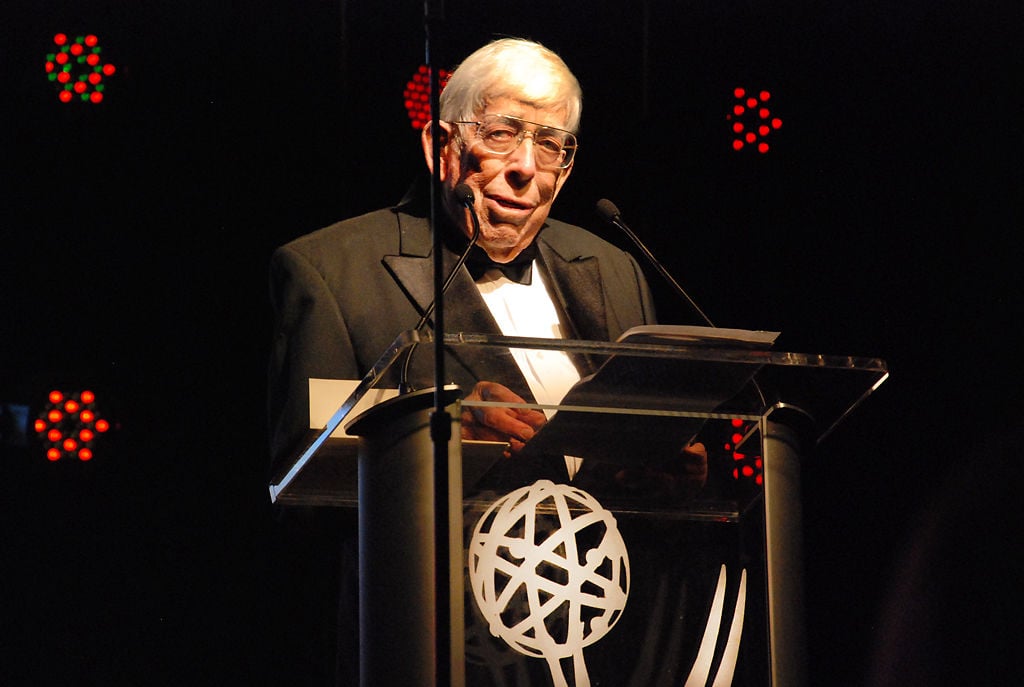 Rod Gelatt is inducted into the prestigious Gold Circle in 2011 at the 35th annual Mid-America Emmy Awards ceremony. 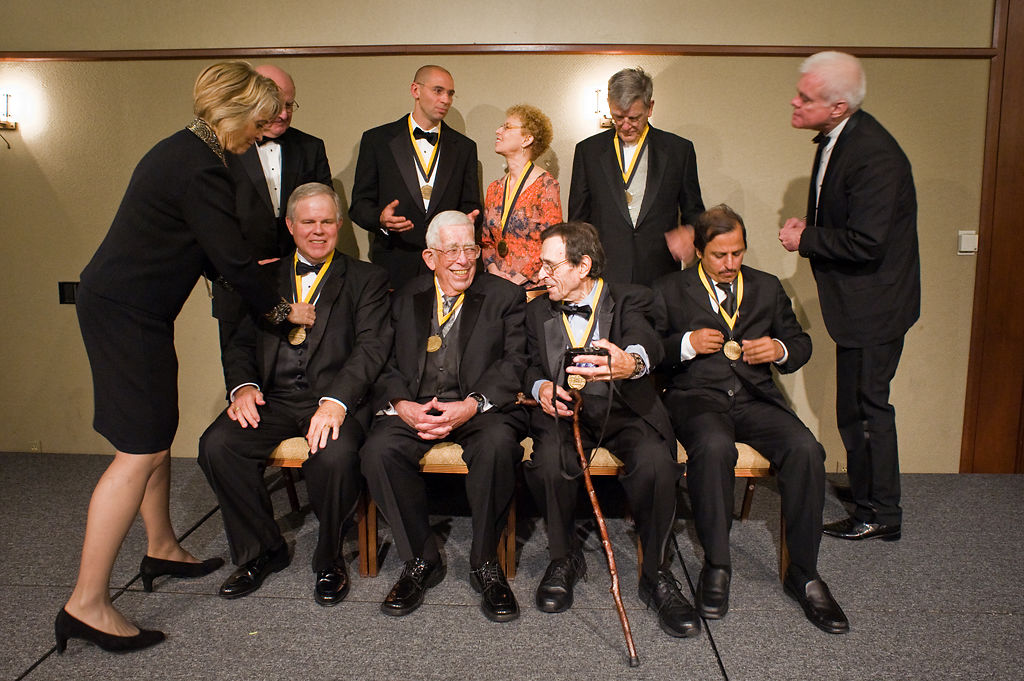 Rod Gelatt, second from left in the first row, sits among fellow Missouri Honor Medalists on Oct. 20, 2009. Gelatt was honored for Distinguished Service in Journalism. 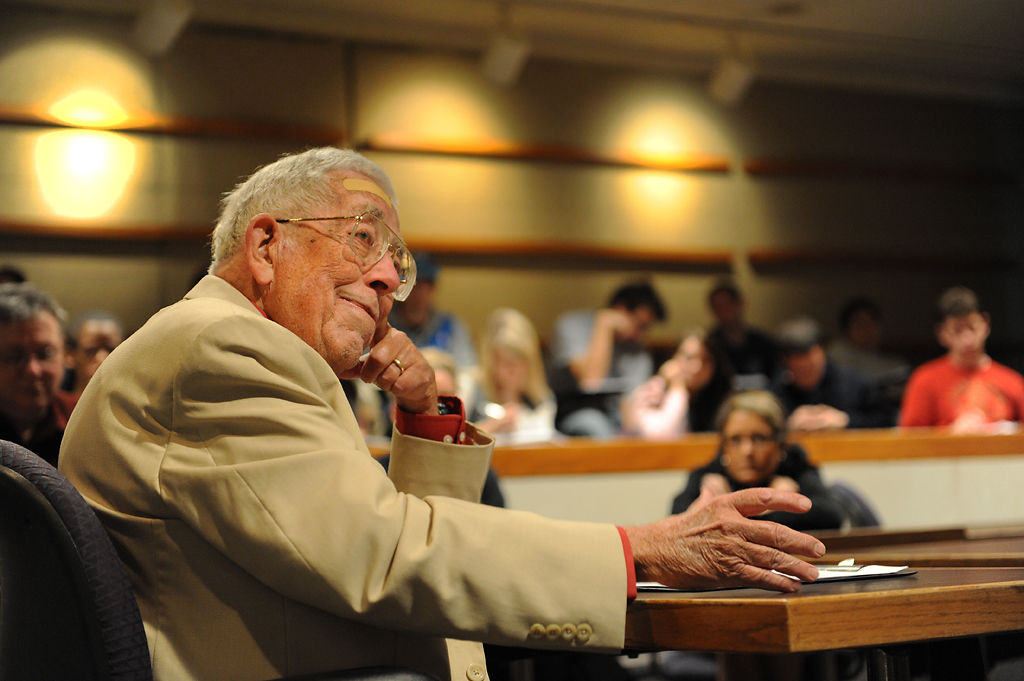 Rod Gelatt gives a lecture at a Missouri Honor Medal Master Class in 2009 at Tucker Forum.

Rod Gelatt is inducted into the prestigious Gold Circle in 2011 at the 35th annual Mid-America Emmy Awards ceremony.

Rod Gelatt, second from left in the first row, sits among fellow Missouri Honor Medalists on Oct. 20, 2009. Gelatt was honored for Distinguished Service in Journalism.

Rod Gelatt gives a lecture at a Missouri Honor Medal Master Class in 2009 at Tucker Forum.

Burial will take place about 2 p.m. at Memorial Cemetery, 1217 Business Loop 70 W. There will be visitation from 6 to 8 p.m. Friday at the Newman Center.

Former students remember his mentorship, his voice and his pipe.

“I knew and worked with and admired Rod for decades,” Professor Emeritus George Kennedy said of Gelatt, who died Sunday at age 93.

“Professor Gelatt was first my instructor then my guide and later my friend,” Collins said.

Stacey Woelfel, a professor of journalism at MU, recalled that Gelatt “had a great sense of humor and a booming voice, a great voice for broadcast.”

Collins said that the man behind the booming voice, who worked as news director at KOMU/NBC and KBIA/91.3 FM, took his role seriously.

According to the journalism school’s website, Gelatt helped build the successful broadcast and radio journalism programs for which the school is known.

“In a day of whiz-bang and sensationalism, Rod was a traditionalist,” Collins said. “He kept his student journalists at KOMU and KBIA on the straight and narrow.”

Woelfel, a former student of Gelatt, echoed Collins. Woelfel said that for a lot of journalists, Gelatt was their first teacher and mentor.

“He was the person to set us on the right path,” he added.

While at the Missouri School of Journalism, Gelatt is credited with applying the “Missouri Method” — learning by doing — in the KOMU newsroom.

“He innovated journalism education, techniques and most (of all) KOMU and KBIA,” Collins said.

Gelatt worked to give students in broadcast and radio journalism the same kind of hands-on training reporters at the Missourian had been receiving for many years, according to information on the Missouri School of Journalism website. Gelatt was the catalyst for giving students the opportunities to be more than just interns at the KOMU news station. He provided them with the chance to be reporters, producers and to fill other roles, which is something that was not done prior to his arrival at the Missouri School of Journalism, according to the website.

Kennedy described Gelatt as a giant in the broadcast and radio world and as a pioneer.

Kennedy said, “Unlike a lot of pioneers, he was a guy who stuck with it. He innovated and kept doing the work.”

In more than four decades of work at the Missouri School of Journalism, Gelatt kept up to date with new technologies coming out and helped his students through those changes, according to the MU Journalism website. Gelatt was also the creator of the London study abroad program at the journalism school, which is very popular among students.

In the 2008 article written by Rosman, Gelatt is described as a journalist who could engage with his audience and as someone to be admired for what he taught his students.

Gelatt’s years of contributing to the journalism school earned him significant recognition from his peers.

In 2009, Gelatt was awarded the Missouri Honor Medal for Distinguished Service in Journalism, and in 2011, he was inducted into the Gold Circle at the Mid-America Emmy Awards. He was recognized with an endowment in his name, the Rod Gelatt KBIA Faculty Enhancement Fund, to help support the radio station where he was director of news.

“His achievements earned respect, but it was his warmth and generosity that brought the love so many colleagues and students felt for him,” Kennedy wrote in an email.

Gelatt’s constant pursuit of journalistic perfection and accuracy is something to be remembered and something that was recognized, Collins said.

“He served mid-Missouri and Columbia in a very honest and reliable way,” he said.

In a 45-year career at the school he was news director of both KOMU television and KBIA radio stations.