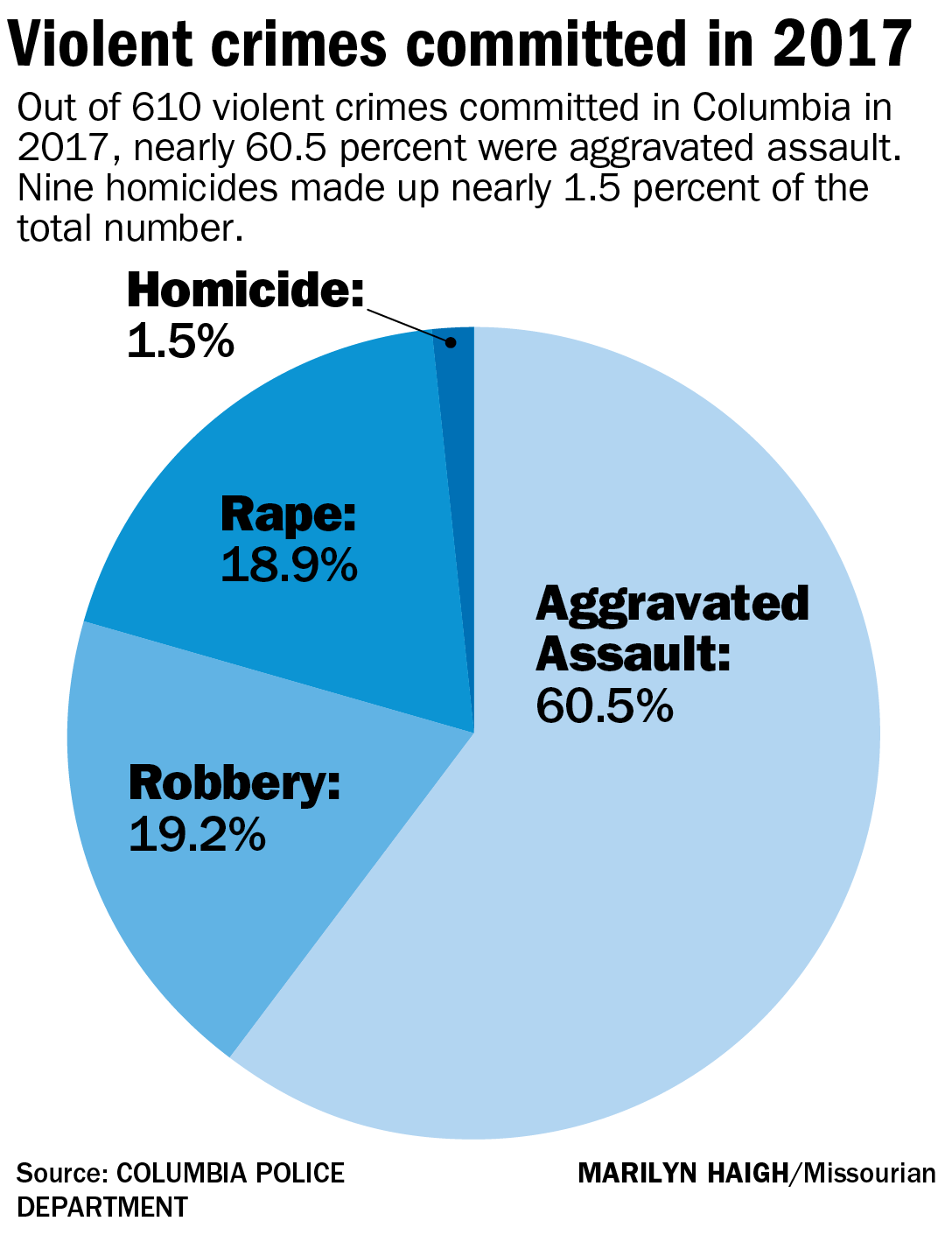 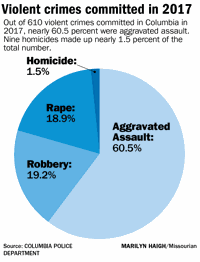 Nearly 60.5 percent of violent crimes in Columbia in 2017 were aggravated assault. 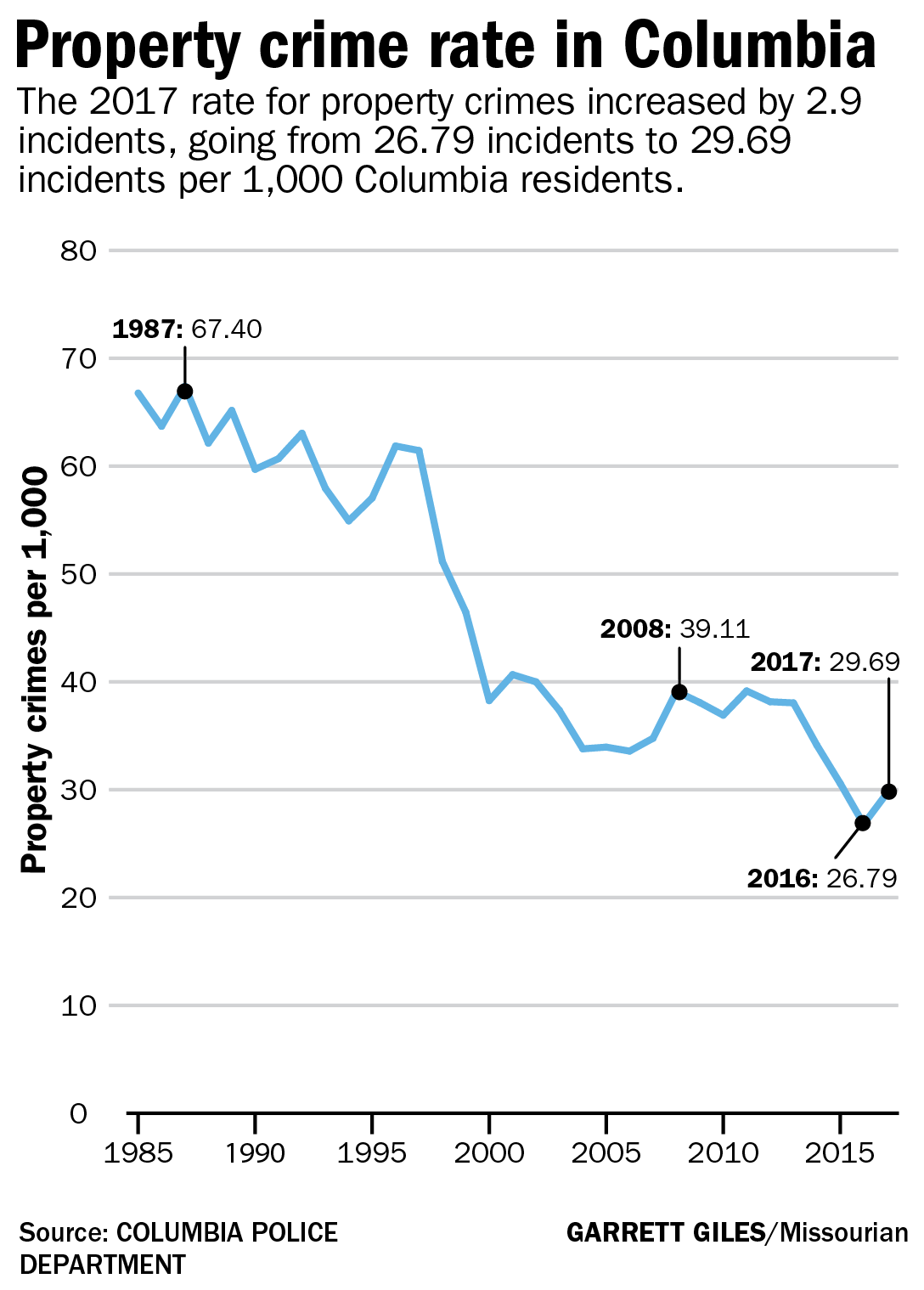 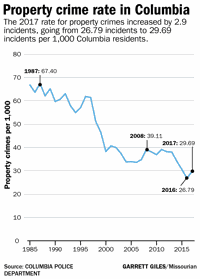 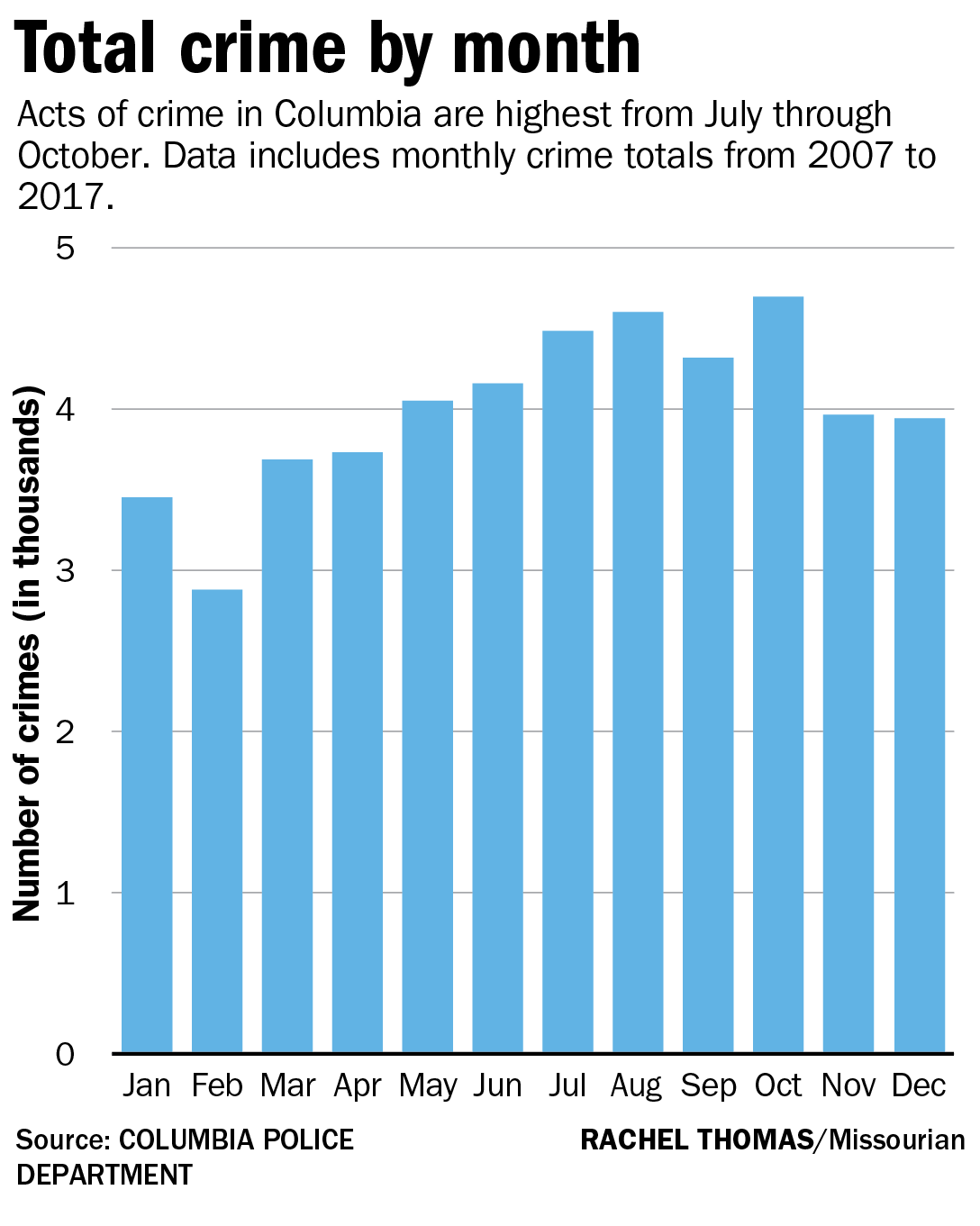 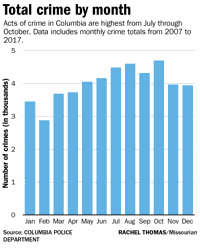 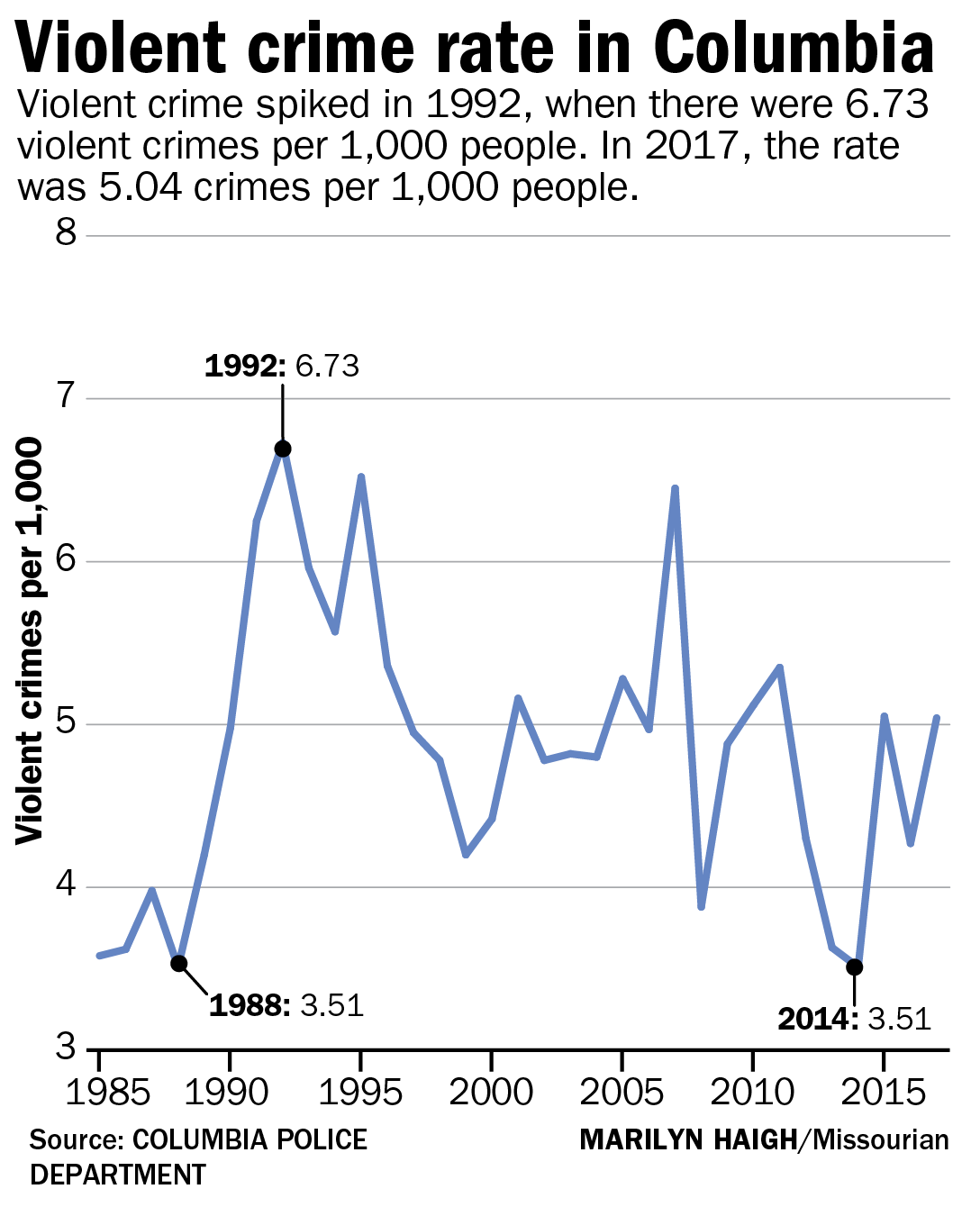 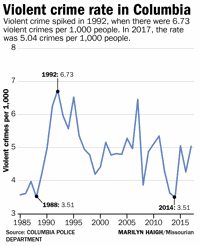 Nearly 60.5 percent of violent crimes in Columbia in 2017 were aggravated assault.

Incidents of violent crime increased 18 percent between 2016 and 2017, with 610 reports last year. The rate per capita, however, was still about five violent crimes per 1,000 residents over the past decade, according to the Columbia Police Department’s Uniform Crime Report data.

The report is published annually and monthly updates are sent to the Missouri State Highway Patrol and FBI. The purpose is to assist law enforcement with monitoring crime and departmental policies and operations, according to the Uniform Crime Reporting website.

Property crime, which includes burglary and theft, saw an overall increase by about 11 percent in 2017. But the number of burglaries dropped about 5 percent.

Violent crimes include rape, homicide, robbery and aggravated assault. Individually, all of these categories have seen an increase the past year, except robbery, which has declined nearly 8 percent since 2016.

The perception of violent crime may be higher than the reality in the age of social media, said Columbia Police Department Public Information Officer Bryana Larimer.

“The reality is when people start posting on social media, ‘Hey, I see a bunch of officers in this area of town,’ then people start wondering what’s going on here,” Larimer said.

In such situations, officers may actually be responding to a more routine call from a business or a resident in the area, she said.

“There’s an elevated idea that there’s always something going on at all times,” Larimer said.

A misperception that acts of violence are more random than they actually are also persists, she said. Violent acts are usually committed by people who know one another.

“To be proactive in trying to combat specific violent crime such as homicide — that is a difficult task for any law enforcement department,” she said.

The number of rapes in Columbia was higher last year than it has been since the department began collecting data in 1985.

Larimer said a broader definition of rape and the conversation surrounding sexual assault with movements like #MeToo might be reasons victims are more forthcoming.

The definition of rape was expanded in 2013 to include more potential crimes. The FBI redefined rape as any sexual penetration without consent, no matter how slight. The definition no longer applies only to female victims, and rape no longer must be “forcible.”

Larimer said she anticipates more victims coming forward because of an increase in education about sexual assault.

“It’s out there, people are talking about it, people are more educated about what options are available to them; thus, more reports are being made,” she said.

In 2017, the department also began implementing the national You Have Options Program, which Larimer said focuses on putting “power back into the victims’ hands” by allowing them to provide a partial report, some information or a full report to investigate the crime.

The program also focuses on developing trauma-informed interviewing techniques for officers to give control to the victim and get serial perpetrators off the streets.

Larimer said the caseload for the Criminal Investigations Division is “extremely full,” so the department has added detectives to address the problem.

She also said developing better partnerships between community members and detectives is crucial to solving cases. Finding perpetrators can be difficult when few people are willing to serve as witnesses on homicide cases, Larimer said.

“To get that information might really be the key to making or breaking the case,” she said.

Burglaries and robberies both declined in 2017.

The number of robberies, classified as a violent crime, decreased by 10 reports in 2017 — from 127 in 2016 to 117 last year. Although the population has increased 88 percent since 1985, the rate of robberies has remained about one robbery per 1,000 residents.

Larimer attributes the decrease in burglaries and other property crime to detectives who find repeat offenders. She said officers also use effective burglary suppression strategies, such as watching for suspicious activity or informing residents of open garage doors.

The department’s crime analyst is able to identify crime hot spots that officers can monitor to deal with recurring crime, Larimer said.

The Community Outreach Unit has been effective in reducing all types of crime in three targeted neighborhoods, Larimer said. Officers in the unit work to build trust with those communities to tackle crime.

The department believes more officers are needed to extend community policing to the rest of Columbia.

“I think a lot of the officers really want the opportunity in every neighborhood throughout the city in Columbia to be able to go in and make the relationships our community outreach officers have created in specific neighborhoods,” Larimer said.

After hearing about the number of homicides in 2017, Mayor Brian Treece called for a comprehensive crime reduction strategy in December. The Columbia City Council heard a report at Monday night's meeting.