Seven pedestrians lost their lives in seven separate crashes across Columbia in 2019. That’s more than double the annual number in any year since 2002, the oldest data available on the Missouri State Highway Patrol’s website. 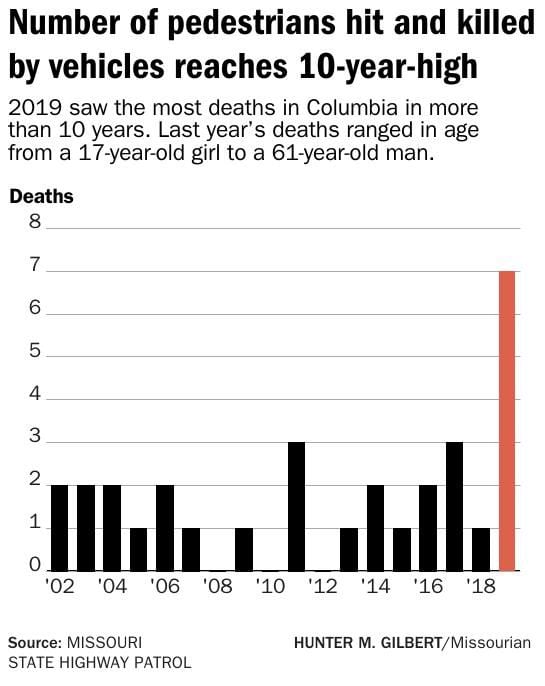 Patricia Beasley survived one of these crashes after she and her friend Katie Paul were hit by a car just after midnight June 1 in downtown Columbia. Paul was killed in the crash, and Beasley sustained two skull fractures, two brain bleeds and four pelvic fractures, among other injuries, according to previous Missourian reporting.

Beasley said what happened to her shows how easy it is to be hit by car and how both pedestrians and drivers have to be cautious all the time.

The driver who hit her and Paul wasn’t drunk. She wasn’t texting. She wasn’t engaging in any of the behaviors people associate with the sort of distracted driving that leads to a pedestrian death. She took her eyes off the road in front of her because she was focused on some other pedestrians who had just crossed, and when she looked back, it was too late.

Police reports show that Paul and Beasley were walking against the light the night of the accident.

“You can think you’re the safest pedestrian there is, but life can happen,” Beasley said. “You could be the safest driver out there and think nothing will happen to you because you’re being safe, but you always have to be aware of your surroundings. ... One moment of distraction can change everything.”

In 2017, Columbia adopted the Vision Zero Action Plan in an attempt to eliminate road fatalities and serious injuries like Beasley’s by 2030. In doing so, Columbia was one of the first cities in the Midwest to adopt the global safety initiative that focuses on education, enforcement and engineering to improve road safety for drivers and pedestrians.

The 2017 plan was approved by Columbia City Council two years after the safety initiative was unanimously adopted by the Mayor’s Task Force on Pedestrian Safety, which has since been disbanded.

The Vision Zero team has been gathering and analyzing data for the past few years in accordance with the 2017 three-year plan. Another action plan is set to be released this year with an emphasis on implementation, said Richard Stone, engineering and operations manager for Columbia Public Works and lead for the Vision Zero engineering team.

Since the plan’s adoption, City Council has held multiple town hall meetings on the issue of traffic safety to engage the community and determine what residents think a safe road looks like. It also banned distracted driving in December 2017, according to previous Missourian reporting.

Vision Zero plans have been implemented in many other cities across the U.S., including Chicago, New York City and San Fransisco. The results of these plans are not always promising, with some cities actually experiencing increases in pedestrian deaths following Vision Zero implementation, according to data aggregated by CityLab, a vertical of The Atlantic.

While pedestrian deaths increased in some Vision Zero cities, it didn’t in others. The problem doesn’t seem to be with the plan itself but instead with apathy about pedestrian safety and a lack of follow-through in implementation.

Simonson said he’s not quite sure what the tipping point will be for Columbia citizens to embrace the “true colors” of Vision Zero but he thought the city hadn’t committed to its implementation. Nor has it done enough to ensure the safety of vulnerable road users.

“It doesn’t seem like there is a vast amount of weight given to the fact that people are dying just trying to cross the street,” Simonson said.

The U.S. has the highest rates of traffic fatalities in the industrialized world, according to a CDC report. Missouri is not one of the 31 states that requires driver’s education — which encompasses sharing the road safely with pedestrians — according to a 2012 review by the Washington State legislature. According to previous Missourian reporting, Missouri has some of the worst roads in America.

In 2012, Columbia had sidewalks along just 50% of its streets, according to the 2013 community development plan, “Columbia Imagined: The Plan for How We Live and Grow.”

Beasley said she never had to take driver’s education but thinks it would be a good idea to require it in Missouri. Her mother taught her road and driving safety, but she knows not everyone has a parent who can teach them what they need to know. She thinks driver’s education would create more consistency and make people more confident in uncertain driving situations.

Vision Zero also argues that if pedestrian deaths are to decrease in Columbia, health and safety of the most vulnerable road users — like people with disabilities, communities of color and low-income groups — have to be a top priority.

“Vision Zero’s data-driven, safe systems approach helps us recognize that the concentration of traffic safety problems are not accidental but rather the result of patterns of disinvestment and under-investment in certain communities, particularly historically black, brown and immigrant communities,” reads the national Vision Zero website.

Low-income people are twice as likely as high-income people to be killed while walking, the website adds. That’s in part because of the lack of sidewalks. About 90% of streets in high-income neighborhoods have sidewalks, compared to about 50% in low-income communities nationwide.

According to the 2013 Columbia Imagined plan, 10.2% of Boone County citizens lived with a disability, potentially putting them at an increased risk of dying while walking on Columbia streets. People who use wheelchairs are 36% more likely to get killed by a car as a pedestrian, according to a 2015 Georgetown University study.

The 2013 plan showed a commitment to improved sidewalks as a means of achieving its goal of improved mobility, connectivity and accessibility of Columbia streets. To achieve this, it emphasized the importance of improving sidewalks and filling the gaps left from the 1940 to the 1970s, when sidewalks were not required.

That’s another example of a systemswide issue that Vision Zero hopes to address. Columbia’s 2017 action plan emphasized the plan would be equitable in its application and help protect vulnerable road users.

Sidewalks and road design are issues of engineering, which played a large part of the 2017 Vision Zero Action Plan.

Stone said some of the specific engineering changes that would improve pedestrian and driver safety were designing safer spaces for left turns, clearer pedestrian crossings, improved visibility and slower speeds in high-traffic areas.

Since the implementation of the plan, Columbia Public Works has finished multiple roadwork projects, like the roundabout at Forum and Green Meadows and the addition of sidewalks along parts of Carter Lane. The city has at least 10 additional road projects planned for 2020 that will integrate Vision Zero ideals of driver and pedestrian safety.

“Because we know the way most of these crashes, deaths and serious injuries occur, we build a system to ensure that when an individual human makes a bad choice or a mistake, that it doesn’t necessarily result in a death or serious injury,” Simonson said. “That doesn’t mean zero crashes. It means that when a crash occurs, the individual won’t have to have lost their life.”

One goal outlined in the initial action plan was the reestablishment of the Columbia Police Department’s traffic enforcement unit, which was dissolved in late 2015 so officers could be reassigned to patrol, according to previous reporting by KOMU.

The traffic unit was then reestablished in the early part of 2019, said Jeff Pitts, community relations specialist for the Columbia Police Department, in an email. The unit has four officers and one supervisor who deal with serious injuries and fatal crash investigations, as well as high-visibility traffic enforcement and the investigation of drivers under the influence.

Stone said Vision Zero advocated for the unit’s reinstatement but not just to encourage ticketing of bad drivers. Instead, Vision Zero saw the unit’s role as engaging with the community and fostering public understanding about traffic laws and to encourage voluntary adoption of safe driving practices, like not speeding and slowing for large curves.

“Every fatality is a tragic outcome,” Stone said. “Zero is the right number ... because when you think about it, how many people in your family is the right number (to lose to a traffic incident)? Zero, just like it would be zero for the community.”